Gigi was the biggest moneymaker Vincente Minnelli had in all his years at MGM, although it concedes nothing to 1950s notions of mass taste. The Lerner and Loewe musical was based on the real-life romance between a sugar heir and a courtesan in turn-of-the-century Paris, a relatively daring topic. Colette wrote the cynically nostalgic Gigi when she was almost 70, during the Occupation. It had been a modest French film in 1948, and soon after, Anita Loos persuaded the author to allow her to adapt it for the Broadway stage. Colette acted as a talent scout, recruiting an unknown Audrey Hepburn to play Gigi, and it was a success largely because of its radiant star.

Arthur Freed, MGM’s legendary producer of musicals, wanted Alan Jay Lerner and Frederick Loewe to write an original score. Loewe balked, because he had never written directly for the screen. Lerner wrote the screenplay using dialogue from Colette’s novella. Their greatest success, My Fair Lady, was just beginning its long Broadway run, and Lerner insisted that Cecil Beaton be offered the job of general production designer. Director Vincente Minnelli, who had planned to be a painter, valued the fresh eye that different working artists brought to his films, and collaborated closely with the gifted and eccentric Beaton.

Some of the film was photographed in Paris, in locations (like Maxim’s) redressed by Beaton, their Belle Epoque interiors meticulously restored. MGM’s tight budget demanded all of the Parisian locations be filmed in a month. Minelli’s was not a tourist’s view of the city. The real fin-de-siecle interiors could create problems. The old Palais de Glace was a musty ruin which Beaton and Minelli had to restore in record time. Chez Maxim’s array of Art Nouveau mirrors reflected the lights and moving cameras, so the actors worked with tiny bulbs beneath their faces, as in a Jules Cheret poster. Plus, the score had not yet been recorded, so the cast had to mouth to vocal tracks dashed off at a local studio with Andre Previn at the piano; the MGM Orchestra would be dubbed in later. Cecil Beaton fetishized his Edwardian childhood, but after My Fair Lady, he was a bit worried he had exhausted his inspiration. He began by reading Colette’s work and turn-of-the-century French magazines. The requirements were lavish, not just the redressing of actual Parisian locations, but new sets such as Honore’s café au lait colored apartments. 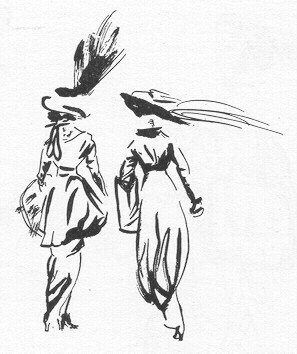 When Minelli turned his designer’s eye to the screen, as in the ballet in An American in Paris, he was often inspired by specific painters. Here, he envisioned an environment by those artists of the period he most admired, Boudin’s seascapes, Seurat’s leisurely Sundays and the caricaturist SEM whose drawings were adapted for the opening credits. Beaton had to supply huge numbers of designs; 150 period costumes for the scene in the Bois, 20 dresses like SEM caricatures for scene in Maxims, and so on. These items were difficult to conjure in Parisian working conditions, but when the production moved to Hollywood, Beaton found warehouses stuffed with period furniture and costumes at his disposal: there was always the perfect stuffed peacock to trim a hat.

Minelli used the beautiful costumes and decor to portray the emotional unease simmering beneath the glittering surface. Gigi is schooled to stifle her feelings in return for a life of ease, but she is a misfit in the demimonde. Minnelli won his Oscar for a somewhat unsavory tale of a girl schooled from childhood to be a kept woman. That he formed it into perhaps the ultimate MGM musical may be as much a measure of his deviousness as his directorial gift.

(Cecil Beaton sketch from his 1954 book The Glass of Fashion)