A flame haired temptress creates havoc between her husband, a sadistic casino owner, and her down on his luck, bitter ex-love in Nazi shadowed Buenos Aires.  You can put the blame on Mame. “Like the crazy evil twin of “Casablanca”…A real 1940s Hollywood treat.” (Guardian UK).

This season, our film noir series will focus on the women of film noir, and there is no better place to begin than with Gilda.  Some writers consider this postwar style as the flip side of the sunny wartime propaganda movies, which GIs returning from WW II often found false and misleading.  Men arrived home from the front changed by their combat experiences. They discovered,  in their absence, women had taken over the world, and seemed to be doing fine without them.  Postwar films often seemed obsessed with getting the independent female genie back into the bottle.  Gilda certainly takes orders from no one.   The Variety reviewer wrote, “when the story interest  lags, she’s certain to shrug a bare shoulder, toss her tawny head in an intimately revealing close-up, or saunter teasingly through the celluloid” (Stokes 42). “Put the Blame on Mame” was the 2nd biggest selling song of 1946, and Hayworth in her black satin strapless gown one of the most reproduced images in Hollywood history.

Gilda may have been devised to be an imitation/homage to Casablanca.  Casablanca won nearly universal critical acclaim, and an Oscar for Best Picture.  Gilda had a tepid reception from the press, and no Oscar nominations.  But, the box office voted for Gilda, which sold more than twice as many tickets as Casablanca.  Casablanca remains a brilliantly crafted film, which one can never see too many times.  Gilda’s legacy is the obsession with which films and film historians have viewed it.  It is commented upon in The Shawshank Redemption and Mullholland Drive.  In Bicycle Thieves, the crime occurs while hanging posters for Gilda.

There are also echoes of Alfred Hitchcock’s Notorious, which shares a theme of Nazi shenanigans in South America, where Ingrid Bergman plays another woman adjusting her morals for her man.  “Bergman and Hayworth polarized the public’s emotional pulse– Ingrid was their saint, Rita would be their sinner.  Both women would exit from the decade more sinned against than sinning in a blaze of headlines bright enough to take people’s minds off more serious problems” (Kobal 190). 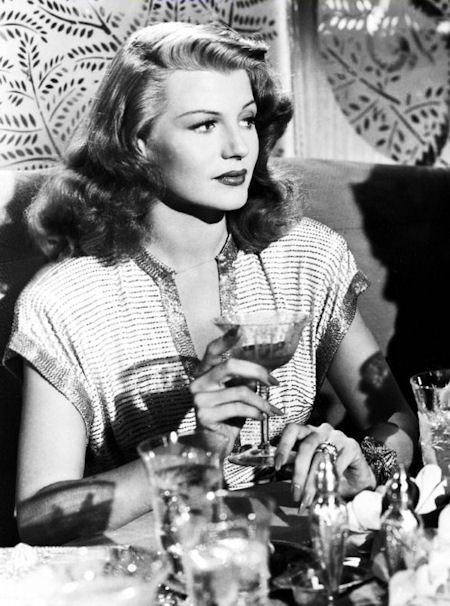 Based on a short story by E. A Ellington, Gilda had been adapted into a shooting script, but there was no final version when filming began.  Much of the finished product was written by Virginia Van Upp, who was a producer at Columbia, and one of the most powerful women in the movie business.  She oversaw much of Hayworth’s career, and was Harry Cohen’s 2nd in command at Columbia.  Johnny Farrell was originally offered to Humphrey Bogart , who found the role a little dodgy for his taste, which allowed Van Upp to refashion the film as, “a unique kind of women’s film, distinctive from any other” (Stokes 20). 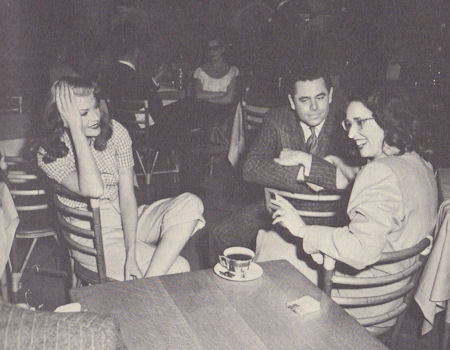 Virginia Van Upp (right) on the set of Gilda with Hayworth and Ford.

There was much wrangling with the Production Code office about sexual suggestiveness.  They policed the amount of leg Hayworth would show, how far her strip tease could progress, and the lyrics of the songs she would sing, forcing a change from “I don’t care whether it’s wrong or right” to “I’m in a dream world of sweet delight” (Stokes 32).  Yet, even though homosexuality was banned from the screen, termed “sex perversion” in the language of the Code, the relationship between the two male leads is clearly a close one, and Glenn Ford said in the 1970s said that he and George Macready “knew we were supposed to be playing homosexuals” (Stokes 33). Yet, as always in classic Hollywood films, there is always room for speculation and at least one film historian has said he has had students “at each other’s throats” over the issue of whether Ballin and Johnny are gay (Stokes 110).

Hayworth was born Margarita Cansino, her Spanish father and Irish mother, a former Ziegfeld Follies girl, had a ballroom dancing act. From an early age, Margarita was one of The Dancing Cansinos.  She was discovered performing at a hotel in Tijuana, Mexico, and appeared for a while, billed as Rita Cansino, in a variety of “exotic” roles, often a Spanish dancer.  The only film from this era available on Netflix is Charlie Chan in Egypt, where she is almost unrecognizable as a mysterious servant girl.  Her first husband introduced her to the head of Columbia Pictures, Harry Cohn, with the intension of “Americanizing” her image.  Her name was changed, her hair died from dark brown to auburn.  Although her Spanish ancestry was often mentioned in fan magazines, her ethnicity was rarely foregrounded in her films with her new name, although here she speaks a little Spanish and sings a Spanish song. 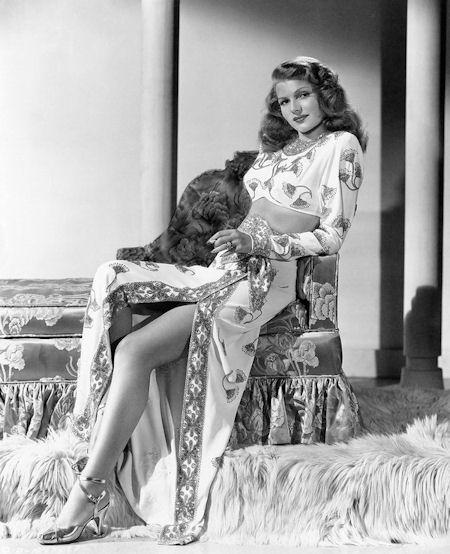 Although song and dance was an integral part of Hayworth’s image, at first there were no musical numbers in the film.  At Columbia, Hayworth’s voice was usually dubbed, which she deeply resented.  But, when she sits at the bar, singing “Mame” to Uncle Pio, she said it was her voice, and several of her biographers agree.  Of her dancing there was never any doubt.  There were only two takes of her sizzling “Put the Blame on Mame” strip tease.

Rita Hayworth’s star persona is strongly linked with her performance as Gilda.  In this film, her ability as a dramatic actress is undisputed, she runs the range of emotions, delivers quotable dialogue with distinctive flair and as Molly Haskell says, Gilda is “playing a man’s game in a man’s world of crime and carnal innuendo, where her long hair is the equivalent of a gun, where sex was the equivalent of evil.  And where her power to destroy was a projection of man’s feelings of impotence” (Stokes 87). 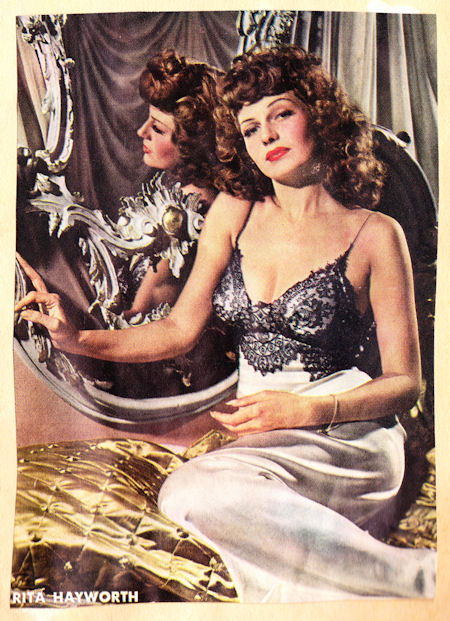 This famous black dress was designed by Jean Louis, who had trained in Paris couture and was Columbia’s head designer from 1944-1960.  Supposedly inspired by John Singer Sargent’s portrait of “Madam X” Louis had to conquer many fitting problems.  Hayworth had recently given birth to her daughter, Rebecca (with Orson Welles) so the dress was designed with a tie crossing her midsection to hold it in tightly.  He also had to devise a boning for her strapless top that would accommodate the movements of the dance.  He used bars of plastic, softened over a glass flame and then molded to her customized dress form, so no matter how she moved, the neckline would stay In place, never showing any of the cleavage banned by the Production Code (Chierichetti 161). He said, “That dress seemed marvelous from the first moment I thought of it.  I think Rita made it sexy because of the casualness with which she wore it.  There was something voluptuous about her ease” (McConathy and Vreeland 171). But it is not this dress alone that is the designer’s legacy to Gilda and Hayworth’s glamorous image: every one of his gowns for this film are drool worthy. 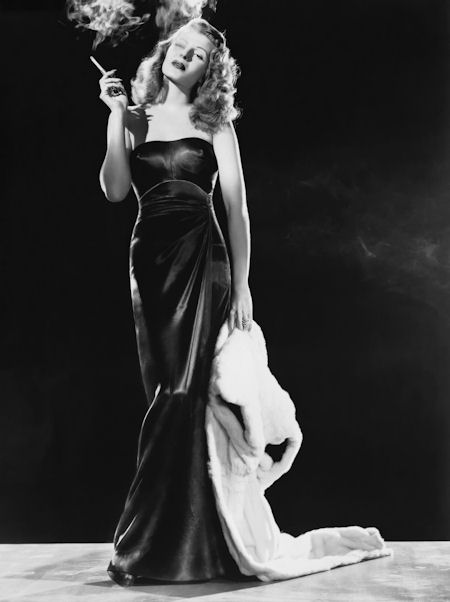 The Welles were divorcing by this time, and rumor had it that Hayworth had more than an on-screen attraction to her co-star.  Glenn Ford had just begun his career in Hollywood when he enlisted in the Marines in 1942.  When he got out, the movie business seemed to have forgotten about him, until Bette Davis requested him as her leading man in A Stolen Life. His role in Gilda  cemented his leading man status, and studio head Harry Cohn couldn’t have been too unhappy about a romance between his favorite star and a promising new one. 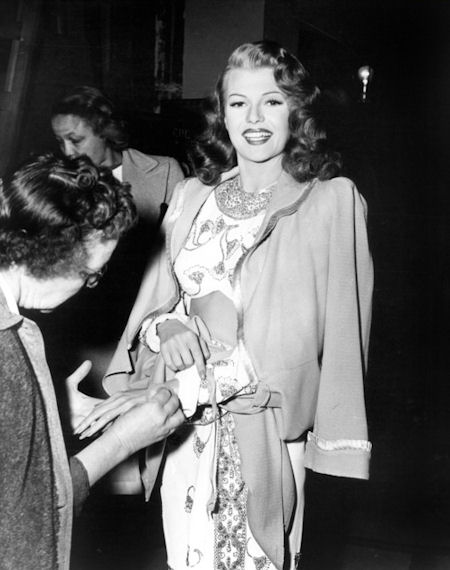 Directed by Charles Vidor, the film was shot by Rudolph Maté.  Visually arresting, Gilda’s every angle, every shadow, every glistening sequin contributed to the dazzling filmic whole. He “devises some elaborately noir compositions which are strikingly expressive of characters power relationships.  There are also some extraordinary shots in which characters’ barely visible faces suggest dark and confused emotions” (Hiller and Phillips 105).

Gilda is ultimately about a woman thought to be bad, who tries to conform to societal expectations by being bad.  Since men desire her sexually, she is forced to act a certain way, giving both women and men in the audience a chance to revel in her bad girl behavior, while secretly knowing she isn’t so bad, after all.  Or, as Jeanine Basinger says, “There are enough layers of meaning in its hot presentation of weird sexuality to fuel PhD theses for decades.” 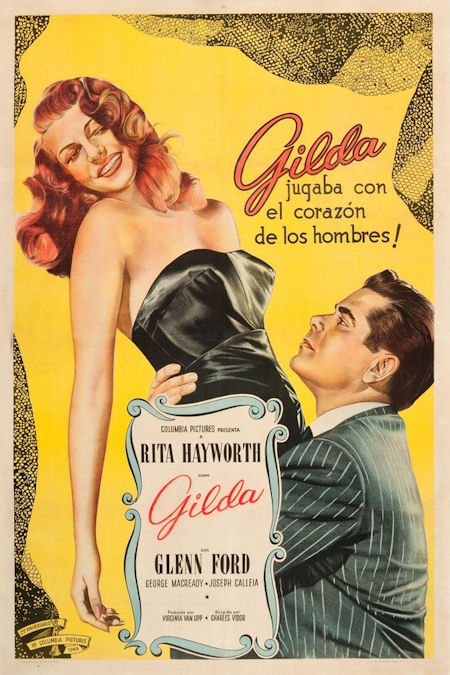