Before making King Kong, real life ethnographic filmmakers Cooper and Schoedsack filmed the Bakhtiari tribe of Persia (now Iran) during their thrilling and dangerous annual migration to animal pasture lands across a raging river and up a 15,000 ft mountain. This breathtaking silent documentary has a recorded soundtrack of Iranian music.

Merian C. Cooper was a globe trotting adventurer, born into a day before mass communications and where large swaths of the world maintained their ancient traditions, unexplored, or one might say, undisturbed by documentation. Cooper, a WW I flying ace, and veteran of other far-flung expeditions bankrolled this long dreamed of trek with family money, and a loan from Marguerite Harrison, who insisted on accompanying them. Harrison was a mysterious figure, supposedly a journalist, she was thought to be working as a spy. Cooper felt beholden to her because she had had sent him food, blankets and books while he was a POW in Russia, shot down in post WWI Poland, while helping the Poles fight the Bolsheviks. Partner Ernest B. Schoedsack was a friend and newsreel photographer. Schoedsack grumbled that it was no place for a woman, and Harrison arrived for the expedition as if for a European cruise, with an evening gown, cosmetics and rubber bathtub in her luggage. But, she was rough and tough, no delicate flower of womanhood, although the men’s grousing about her tagging along would provide fodder when the journey was recapitulated as fiction as Carl Denham’s Skull Island adventure in Cooper and Schoedsack’s most lasting legacy, King Kong.

Cooper had been pouring over maps at the American Geographical Society looking for a remote location where he could make a film. He became interested in the Kurds, and thought Kurdistan would be photogenic. Cooper and Schoedsack had never made a movie before, and had “super colossal youthful enthusiasm” but not a lot of experience (Vaz). They three cameras, one a lightweight Debrie movie camera, two tripods, and four big boxes of film. They traveled to Constantinople, where in those unsettled times their motives, as foreigners, were highly suspect and there was a long delay. But, they were eventually allowed to drive to Baghdad in a Model T Ford where Cooper heard about the Bakhtiari tribe of Southern Persia, and their spectacular annual trek, across the Karun River and up the cliffs of Zardeh Kuh. Luckily for them, the seasonal migration, 50,000 people and half a million animals, was about to begin. Cooper, Schoedsack and Harrison, parleyed, charmed and smoked opium with the local Princes, and were finally granted permission to join Haidar Khan, chief of the Baba Ahmedi tribe on the migration. Although there was a less strenuous route, they wanted none of it. They were told by chieftan Amir Jang “No foreigners ever been. Big mountains. Big wood, big river and then big, big mountain with plenty snow. And my people there men call ‘bears’ they live so wild and hard. They drink sour milk, eat nothing but acorns and little mutton. Ver-y ver-y bad road” (Cooper 42). 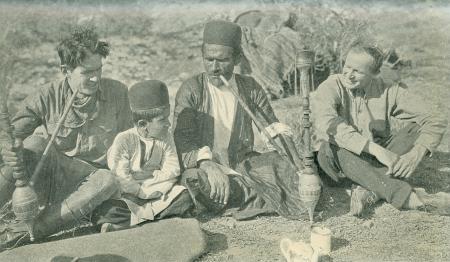 After the Day’s March. Often we would go down to Haidar’s camp to smoke the Kalyan with him.

Rahim, the son of one of “the strongest and most warlike of the Baktyari princes” had a Western education and told Cooper, “These people want none of the things that I learned in your American school. What do they care for republics and votes and the equality of men? This life is their life, and they love it—to sleep on the hard ground, to eat by campfire, to fight with other tribes. What they want with civilization? They want strong man, cruel man, hard man, man who says, ‘You do this or I have you beaten until you die.’ Me, I am Baktyari, also, but I learned too much in American school. Now I like to go live on Broadway—theaters, plenty pretty girls, dance. I change places with you. You come be boss of Baktyari; I go dance on Broadway” (Cooper 53).

“Throughout his life, Cooper would fondly recall this great time of youth and the dream of endless possibilities, even the dream of fleeing civilization, with its soft ways and poisoned air, to join the tribes and share in their life in the great age old struggle against nature—to perhaps even command a tribal army of conquest!” (Vaz).

The Bakhtiari had a reputation as fierce fighters, impervious to the elements. Cooper and Schoedsack left their weapons behind and instead broke bread and salt with the tribal elders to insure their safety. During the journey, they ate the same food that everyone else did, and slept out in the open during the journey. The tribes had one set of tents at the beginning of the trek and another at the end, so they travelled as light as possible. Only Harrison had a tent, where she slept with the cameras and film, protecting them from the elements. The journey was slow, so Cooper and Schoedsack traveled ahead of the tribe to set up their shots. They had a translator, and learned a little Persian, if just to say, “Don’t look at me” so their subjects wouldn’t look into the camera. Cooper also took 5 x 7 still photographs of the tribesmen and developed them in a tent using muddy ice water, stills that would illustrate his diary of the journey. Once they reached the bank of the Karun River, they would be going where no foreigner had traveled before. 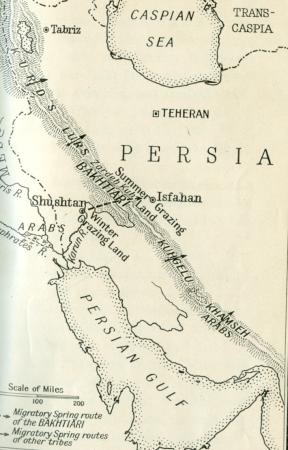 Map of the migratory trail from Cooper’s journal.

By the end, Cooper and Schoedsack had shot all but 80 feet of film. They always regretted not being able to put Chieftan Haidar Khan, his son Lufta, his two wives and the rest of their family more in the center of their story, but as inexperienced filmmakers, they shot as they went along. They planned to return, but didn’t have enough money to do so until the picture was released, and then it was too late. There was no script. Cooper hadn’t even seen very many films. He’d only heard about Nanook of the North, Flaherty’s pioneering documentary film.

Back in a cheap Parisian hotel room, practically broke, they read a book on how to develop film, hired two girls to help them and did it themselves! Returning to the US, they had to throw away some of their footage, because they couldn’t afford to pay duty on all of it. Cooper took the film on a profitable lecture tour and was elected to membership in the Explorer’s Club. The film was released by Paramount but not until one sequence was added, that of its makers, taken next to a rock behind Paramount’s Astoria Studio in Queens, New York. Viewers like Gilbert Grosvenor of the National Geographic Society applauded its “Geographical knowledge” as well as its entertainment value (Vaz). Although some critics insisted it was a fake, filmed in California, and some were appalled that Marguerite Harrison was too made up and coiffed (which she had carefully done the days she knew she would be on camera), the success of this film made their next film, Chang, possible. 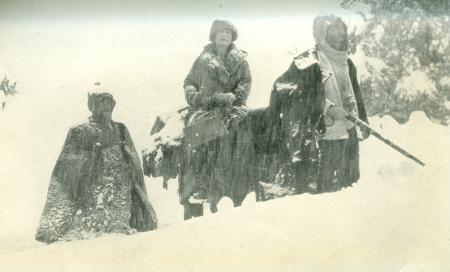 Mrs. Harrison. Mrs. Harrison, with two Turkish mountaineers, plunging on through a snowstorm in the Taurus Mountains. We spent some time among the mountaineers of the Taurus before we crossed down into North Arabia on our way to Persia.

The existence of a rerelease of Grass is thanks to Dennis Doros of Milestone Film and Video. He became enamored of early age of exploration films because of Kevin Brownlow’s The War, the West and the Wilderness—exactly the same reason I wanted to see these films. Doros had been working at Kino, and his first acquisition was Chang, another great Cooper Schoedsack film about elephants in the jungles of Siam. He used his bar mitzvah savings to convince 95 year old Jock Whitney, an old partner of Coooper’s who held the rights to the film, to allow him to distribute the film, and thus insure its immortality. The rights to Grass had been donated to the Museum of Modern Art, and Milestone got those rights in 1990. DVDs of both those films, and many others, are available from Milestone.

Schoedsack said, “I have always considered Grass to be a lost opportunity, a great missed chance” (Brownlow). In fact, Cooper contemplated remaking Grass in 1947, but discovered this area around the Persian Gulf oil reserves were being developed extensively. Even in the 1920s “These Anglo-Persian oil fields have, of course, given great power to the Baktyari leaders, because of the addition to their wealth. The ‘fields’ are just within the border of the wild tribal lands, and are a bit of civilization thrust up into the wilderness. The tribesmen are said to despise those many of their fellows who have gone to work there” (Cooper 25). When he returned after WWII, there was a railroad there, and much of the migration took place using trucks and cars, no doubt on an easier route. The mighty Karun river was now spanned by a bridge. Cooper and Schoedsack unknowingly filmed the twilight of an ancient way of life.

The audience for the screening at the North Carolina Museum of Art were astonished by the film, as is everyone who sees it. Some of the titles are a little corny, and there are lots of shots of adorable babies (human and animal). For a film from the 1920s, it is extremely respectful of the Bakhtiari people, reflecting Cooper’s own admiration for the tribes. After the show, a number of people came up to me to say they had never seen anything like it, that it was among the most extraordinary films they had ever seen at the NCMA. I’d been waiting for several years for the perfect opportunity to show it, and was pleased with the enthusiastic reaction.

Cooper always idealized his days and nights with the Bakhtiari. “Life has its high points. You risk your skin, and in the moment when life balances with death, no matter how afraid you may be, you get a touch of the animal value of existence. You swim alone out to sea and leave the world behind. You fly above the golden spires of a Russian city of many churches and look down upon it, and it seems to have a roof of gold. You eat your belly full after days of starvation. You come sweating down to a lake after hours of portage, heave pack on ground, and jump full clothed into the cool waters. Wind and rain beat on your face as you brace yourself to swing the wheel, as a giant wave comes crashing towards your little sailing ship. Some man trusts you above all other men and you realize what friendship means.

“These are the seconds which give the zest and fire to existence. These compensate for the sleepless hours when you remember the times you played the fool of the snob or the cad. These are the moments when conscience and memory alike are downed in the fine physical or spiritual beauty of life” (Cooper 137). 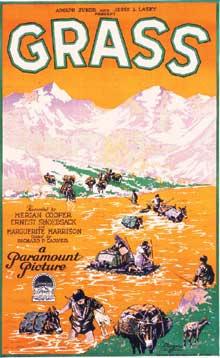 (Photos from Cooper. Sources include: Living Dangerously: The Adventures of Merian C. Cooper by Mark Cotta Vaz, The War, The West and the Wilderness by Kevin Bronwlow, Grass by Merian C. Cooper. The latter book I got out of storage from the University of North Carolina library. They still stamp the due date there, and I was the 15th person to take out the book since the first borrower, June 3, 1936.