A film historian first, director Bogdanovich is well suited to provide both biography and career overview of one of moviedom’s great geniuses.  A kaleidoscope of commentators rhapsodize about Keaton’s uniquely brilliant art, and a thoughtfully hilarious selection of film clips pay tribute to his Jazz Age masterpieces and fearless physical comedy.  “He is one of the inventors of cinema” –Werner Herzog. “It’s a celebration and also an invitation to some of the purest, strangest laughter the screen has to offer” (NY Times).

Peter Bogdanovich once said, “I was born, and then I liked movies” (Harris p. 1). His father took him to museums and the opera, and to the Museum of Modern Art to see silent films.  His mother took him to the theater.  His love was so deep, that from the age of 12 he kept a card file of every one he had seen, with ratings, comments and credits, a file he kept until he finished directing The Last Picture Show, at the age of 30.  Total number of cards, including both features and shorts:  5,316.  (Bogdanovich 16).  He began programming films for The New Yorker repertory theater, and was then asked to program and write a monograph for an Orson Welles retrospective at MoMA, the first.  He booked the first Humphrey Bogart festival at the New Yorker, and then went on to program his other favorites, including Buster Keaton.  He studied acting with Stella Adler, and began to act on stage. His extensive New York programming, writing and directing credits made it possible for him to connect with many of his idols.  He said when he arrived, in Hollywood, in 1961, he felt he was at the end of the Golden Age of Movies, which, by his reckoning, lasted only from 1912-1962.  Orson Welles, who became his friend over the course of many years (they were even roommates for a time) laughed, “Well, what do you want?  The height of the Renaissance only lasted 60 years!” (Bogdanovich 10).

Bogdanovich started working for Roger Corman, who gave many directors their low-budget first chances.  Corman had two more days with Boris Karloff under contract, and challenged Bogdanovich to make a film, any film, using the aging star.  The result was Targets, a disquieting movie about a mass shooter and an elderly horror film actor.  Bogdanovich’s first major film, The Last Picture Show garnered rave reviews, Oscars, and ignited the careers of actors like Cybil Shepherd, Cloris Leachman and Jeff Bridges. His most famous films include What’s Up Doc?, an homage to one of his favorite directors, the Howard Hawks of Bringing Up Baby, and Paper Moon. His documentary, Directed by John Ford was commissioned by the American Film Institute.  He has continued to write, direct, act (most notably on The Sopranos) and host televised films.  He was, until recently, on the faculty of the UNC School of the Arts in Winston Salem, NC.

The Great Buster is both an overview and a deep dive into the work of one of cinema’s unique artists.  I’m quite familiar with Buster’s work, as he is a long time movie obsession of mine, but even so, I was pleased and amazed to see so many unfamiliar documents from the earliest part of his career, as well as the delightful ads and other tv spots he did at the end of his active life, which were also new to me.  I really love that Bogdanovich gets the sad part of Buster’s life, the alcoholism, the ruined marriages over with, so the last third of the film celebrates the joyous work, and his late in life happiness with his third wife, Eleanor, who did so much to keep his flame burning amongst his friends and fans for so many years.

When I became interested in silent films, in the late 1960s, reference works said that 90% of all silent films were lost.  Now, some sources say perhaps 70% are lost, a vast improvement.  Why are all of Buster Keaton’s silent films available?  It’s both because of Keaton himself, and the controversial collector, Raymond Rohauer.  Rohauer ran a repertory theater in Los Angeles, and in 1954 showed The General, and Keaton himself came to watch it in the theater.  Keaton said he had more films in his garage, and Rohauer arrived to find decomposing copies of The Three Ages, College, Sherlock, Jr and The Navigator.  Rohauer said he could get the prints transferred to safety stock, but only if Keaton would become his business partner.  He bullied film labs to take the flammable prints and preserve them.

In the 1920s, at the height of his fame, Keaton lived in a fabulous Hollywood mansion he called The Italian Villa.  He had a home office on the property, a small shed in which he edited his own films, and had a safe where he stored personal prints of all his shorts, and the negative of The General.  When Keaton left in 1932, subsequent tenants used the building to store garden tools.  The home was bought in 1949 by James Mason and his wife, but it took several years before they realized the rusty safe in the garden shed was jammed with nitrate films.  Some he donated to the Acadamy of Motion Picture Arts and Sciences, and others were eventually returned to Keaton, who in turn gave them to Raymond Rohauer.   Rohauer continued to scour the world for Buster’s prints, and go through the arduous and expensive process of clearing the rights.  As Keaton’s partner, all of the films now bore the credit, “Raymond Rohauer Presents” forever linking his name with that of his idol.  Walter Kerr said, “Before Rohauer there were no standing ovations at film festivals for Buster Keaton” (Meade 260). Stan Brackage said, “You have to give the devil his due.  With his wild and sometimes vicious love of film, Rohauer did more to preserve meaningful work than any museum in the world” (Meade 251).  Rohauer was a strange guy, much disliked in the film community.  But, he almost single handedly preserved Keaton’s life works.

This film is also a celebration of its director, Peter Bogdanovich, but I supposed he has earned that.  I have to say it’s rather shocking that there are only two woman speaking in the entire film, Cybill Shepherd, his ex-wife, and Patricia Eliot Tobias, founder of the Buster Keaton Society, the Damfinos.  As my daughter said, disdainfully, “Was Carol Burnett too busy?”  Also, I can’t help that wish that Quentin Tarantino and Johnny Knoxville would just shut up.  They have nothing insightful to add to the conversation, and seem to be included just to add contemporary voices.  The one voice I’d like to hear more of is Buster, himself.  He gave a lot of interviews in the 1950s and 60s, and I would have loved to have seen a few more clips of those.

But, with those two minor quibbles, the film is deftly directed, by an old master, and doesn’t seem too long, the way so many documentaries do.  I hope this film makes you laugh, and brings you back to see one of his masterpieces, Steamboat Bill, Jr., with live music, next week. 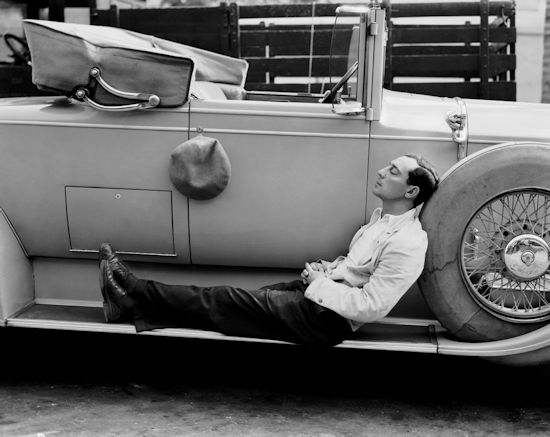 Here is an article Bogdanovich wrote about why he made this film:

Bogdanovich’s Picture Shows by Thomas J. Harris, Who the Devil Made It by Peter Bogdanovich, Buster Keaton:  Cut to the Chase by Marion Meade