In Gumnaam, a chartered planeload of motley passengers is abandoned on a remote island, and one by one, they are murdered. If this plot sounds familiar, it’s because it owes a lot to Agatha Christie’s Ten Little Indians, and the 1945 film version, And Then There Were None. Yet, even more than usual, the resemblance is merely superficial.

The Hollywood version of this story is flavorful, and a bit odd, as directed by expatriate French director René Clair. Clair was temporarily residing in California during World War II, along with many other European artists fleeing the Nazis. He began his career with surrealist silent films like Paris Qui Dort, and continued in France with narrative films, including the early musicals, Le Million and Sur les Toits du Paris. He made some enjoyable American movies during his exile, including The Ghost Goes West, The Flame of New Orleans and, a particular favorite of mine, I Married a Witch.

And Then There Were None was his most popular American film, as well as his last, before returning to France. It was also the one in which his personal filmmaking style was most subordinated to the existing material. The film does not have any major stars and does quite well with a pure cast of character actors, easily weathering the wartime leading man shortage. Fortunately, this gives flamboyant players like Walter Houston, Richard Haydn, Barry Fitzgerald and Judith Anderson center stage. They make the most of the drama of their ever declining on-screen numbers, often speaking directly to the camera, thus including the audience in on their dilemma. Every one of the Ten Little Indians has gotten away with murder, and they are being punished by a mysterious killer, in lieu of the long arm of the law. It doesn’t take a Film Studies degree to discern that pallid Romeo Louis Hayward and vaguely pretty June Duprez might be included wrongly in this collection of knaves. They “are the only two uninteresting characters in the film in terms of acting, direction and script” (Dale 352).

One might easily say the same about Gumnaam‘s Manoj Kumar, a nice looking boy obviously being urged (unsuccessfully) to imitate magnetic Shammi Kapoor, then in his heyday. Shammi would have been a much more interesting choice for a hero, and surely an actress more adept than Nanda might also have beeen cast. Her primary facial expression is that of brow furrowing anxiety. They, too, are overshadowed by character actors, especially, perennial villain, Pran, and Helen, usually showcased exclusively in dance numbers, here in a much more generous acting role than she is usually afforded in her films.

Gumnaam begins with just about the best 15 minutes in the movies. Anywhere. And, it has nothing to do with a Hollywood pedigree. A man is murdered by contract. Revenge is taken. An anonymous phone call. A woman shrieks! And then, Jaan Pechaan Ho, a frenzied rock ‘n’ roll siren call. You may know this song because it was invoked as a signifier of cool in Terry Zwigoff’s Ghost World (2001). When I saw the song in that movie (a year before I saw my first Hindi film) I was baffled, by the fab 60s musical madness sung in a language I did not recognize. Masked choreographer Herman (thank you Memsaab) lip syncs to Mohammad Rafi’s manic vocal, while Laxmi Chhaya shimmies madly to the irresistible beat. 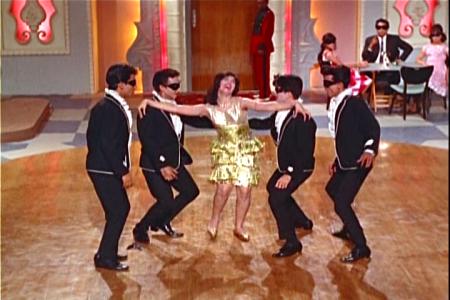 This is all a ploy to get the cast to their remote location, where justice can be served. They are all the winners of a contest, the prize: a holiday in hell! A mysterious title song, sung by Lata Mangeshkar floats in the air. Even more mysterious, it seems to be the melody of Henry Mancini’s theme for Charade (1963). Strangely, for a film culture that often stresses divine justice, the part of the plot where it’s clearly explained that the reluctant guests are criminals who will inevitably be punished for their crimes is rather forgotten amidst the diversions of comedy and song. One detail that solidifies the inspiration of René Clair’s film is Louis Hayward/Manoj Kumar’s peeping through keyholes to confirm nefarious motives. As you can see, some of the openings vary in the house in Gumnaam. 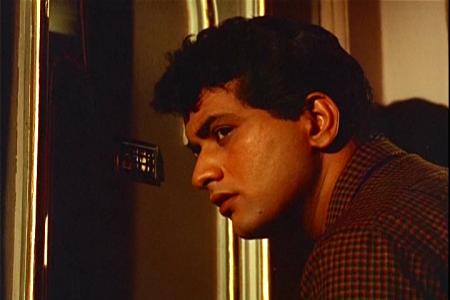 This one is a little grill. 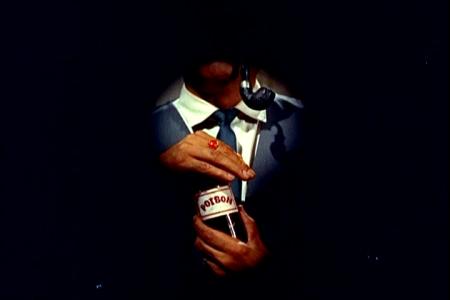 A more traditional keyhole shape reveals this clue. This series of shots is purloined directly from René Clair

As for the other characters, Walter Houston spends much of And Then There Were None nipping from a bottomless flask. In Gumnaam, Pran does the same, with the more pleasant company of the fabulous Helen, whose character has no equivalent in the Hollywood version. 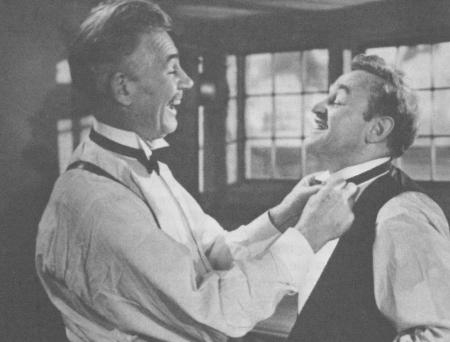 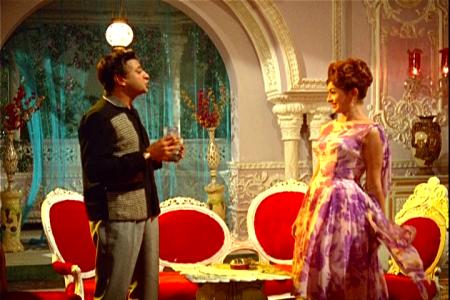 Miss Kitty purrs that she likes alcoholics, but not alcohol.

In older Hindi films, comedy is often confined in segments focused on comedians, who do their funny business separate from the main plot. In both versions, the butler/cook provides considerable humor. Richard Haydn’s comedy in ATTWN (and his subversion of the British class structure) is considerably more subtle than that of Three Stooges Moe-like Mehmood. But, Mehmood seems funnier than usual (to me) and gets his own mind-blowing dream sequence dance number, “Hum Kaali Hain” in which, after being firmly rebuffed by the beauteous Helen, he asks why a dark skinned man cannot also be a “Dilwale” (loverboy). 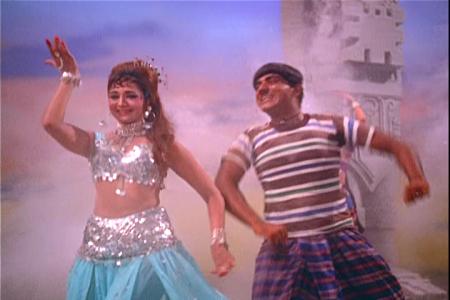 Clair’s film runs meticulously on the mechanism of its clever plot. He and his writer Dudley Nichols were interested only in “the ‘little bluffs and deceits’ they invented to keep the audience guessing, and indeed these many brief ironic tricks enliven the film’s narrative considerably” (Dale 353). Clair’s technique even extends to the spoofing of Hollywood’s genre conventions, as when the camera pans up to reveal a face…obscured, when the camera finally reaches it, behind a lampshade. 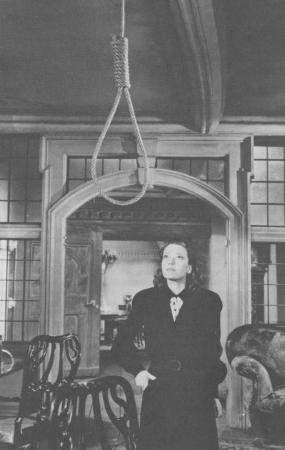 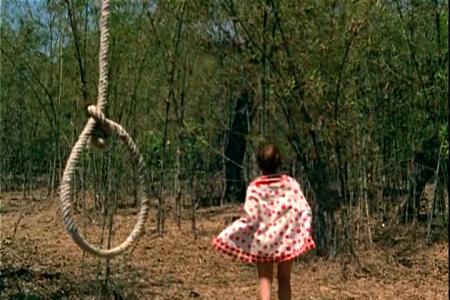 Helen runs the other way. 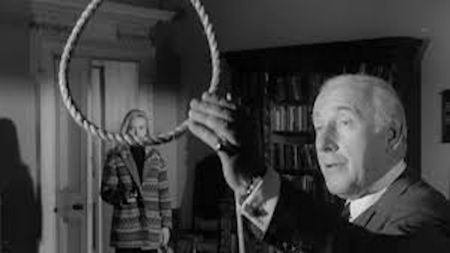 Hindi films are much less concerned with plot, a fact hidden from nobody who has ever seen one. Gumnaam is just one big digression, but when the digressions, scored to the music of Shankar-Jaikishan are more entertaining than the plot, why demand one?

There was another version of Ten Little Indians in 1965. Produced by the same man, Harry M. Popkin, who produced René Clair’s film, there are differences in the setting (in the 60s version, an isolated fortress house at the top of an icy Alp) and cast, but the plot, and even the dialogue, is quite similar. Keyhole peeping and secret flask nipping are central to the mystery, as is the shared bathroom. In the 40s version, the “Ten Little Indians” nursery song is sung at the piano by Mischa Auer, as a freeloading Russian prince. In the 60s version, this role is taken by the teen idol Fabian, who is so obnoxious that one hopes that he becomes an early victim of the mysterious killer. Judith Anderson’s dignfied Emily Brent is replaced in the later film by a sultry actress played by the Israeli starlet Daliah Lavi. And Then There Were None is centered on the flamboyant character actors Walter Houston, Barry Fitzgerald, and Richard Hayden; Ten Little Indians features the more understated style of Dennis Price, Wilfred Hyde-White and Stanley Holloway. The love interest is the surly Hugh O’Brien, and Shirley Eaton, whose primary purpose seems to be to frequently change out of her clothes. The year before, as a Bond girl, she met her end covered in gold paint in Goldfinger. This version, in some prints, includes a minute-long break towards the end, where a clock ticks off and you have a chance to solve the mystery. If you are familiar with the different versions, you must intuit that it will follow the ending of the 1940s film (based on a stage play) and not Agatha Christie’s original.

Bollywood often repurposed Hollywood films. But, how quickly could this be done? Ten Little Indians came out the same year as Gumnaam. Clearly one of the other versions is a key influence, but which one? 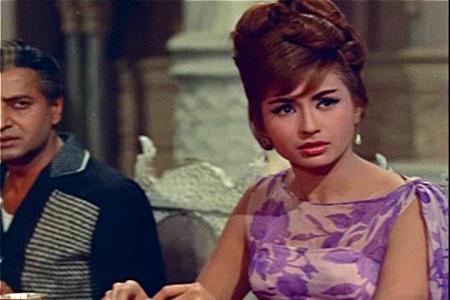 (Sources include The Films of René Clair by R.C. Dale)