Bart always carries a gun…”Nobody can tell what might happen.”  Hooking up with a carnal carnival sharpshooter, two wild kids with a passion for firearms embark on an epic crime spree.  “Noir’s most intoxicated lovers on the run…one of the cult B-movie classics of all time” (The Rough Guide to Film Noir). UCLA archive print.

Bart and Laurie, the doomed couple at the heart of Gun Crazy, go together like guns and ammunition.  The film, a feverish B picture from a poverty row studio, served as a clear role model for Bonnie and Clyde with Warren Beatty and Faye Dunaway, their iconography linked through the beret worn in the most famous photo of the real Bonnie Parker.  They both fit neatly  into a long history of “lovers on the run” road movies in American film, which includes Nicolas Ray’s first film, the almost unbearably sad, They Live By Night, with Strangers on a Train’s Farley Granger, and Cathy O’Donnell.

“It’s a film about the rise and fall of a couple of ordinary people, and the sort of film that inspired Jean Luc Godard’s memorable view of cinema: “all you need to make a movie is a girl and a gun.” Bart and Laurie, who are not shown as innocents corrupted, but initiating crime through their love of the power of firearms, are a perfect example of the surrealists “l’amour fou” that mad love outside the traditional goals of love and marriage, home and hearth. 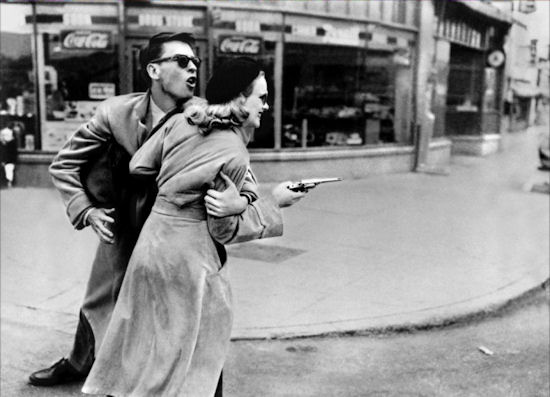 MacKinlay Kantor (along with blacklisted Dalton Trumbo, writing under the pseudonym Millard Kaufman) adapted his own Saturday Evening Post story, and it would seem to be a personal work.  Kantor loved guns in his youth, and had run with a rough crowd after his father’s desertion.  His mother had distracted him by having him help her edit the small town newspaper she ran.  The themes of the absent father and an obsession with Western myth propel the story, the latter represented by the six shooter young Bart lusts after, as he will later lust after Laurie in her costumey cowgirl getup.   The gangster film was constructed as the dark shadow of the American dream of individuality and upward mobility.  Here, again, as so often in the noir universe, following your dream on the wrong side of the law lands you in deep trouble. Kantor would win the Pulitzer Prize in 1955 for his Civil War novel, Andersonville, and Trumbo, once the highest paid screenwriter in Hollywood, would win an Oscar for The Brave One, a story penned under a different HUAC evading pseudonym.  The film’s producers, the King Brothers may have been schlockmeisters, but they supported blacklisted artists when the major studios cowered. 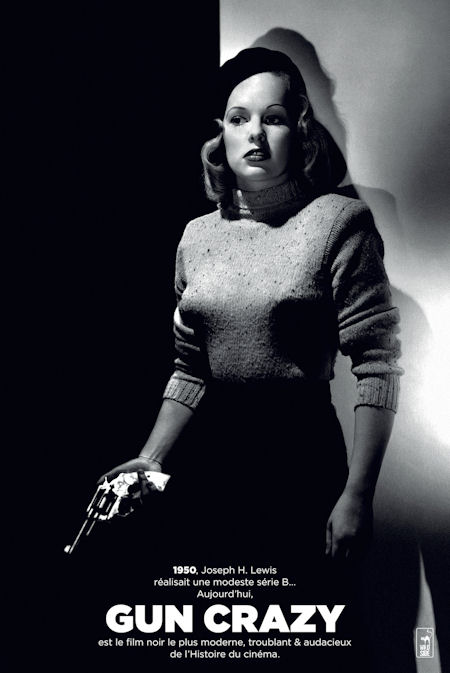 The King Brothers had aspirations for their cheapie masterwork.  With a budget of $500,000 and a 30 day shooting schedule, lavish for poverty row, they hired solid craftsmen, like director Joseph H. Lewis, who used his experience gained in a decade grinding out low budget pictures.  They sought both Gregory Peck and Dana Andrews for the lead, and at one point envisioned Farley Granger and Susan Hayward.  Instead, they settled for John Dall, an actor who specialized in characters who could be manipulated by strong personalities, as in Alfred Hitchcock’s Rope, or as the coal miner aspiring to greater things in The Corn Is Green.

John Dall only made 8 films in 16 years. Born in New York City, he went to Columbia University briefly before deciding he wanted to make his career as an actor.  He had just finished shooting Rope for Hitchcock when he was cast in Gun Crazy. He got good reviews, but rumors about his sexuality seem to have curtailed his Hollywood career.  Lewis, Gun Crazy’s director, said the actor’s sexual ambiguity was the reason he wanted him in the film.

Peggy Cummins born in Wales, lived in Dublin, Ireland and London, England, made her British film debut at 13.  She initially came to Hollywood to star in the lavish historical drama,  Forever Amber, but she was replaced by 20th Century Fox by Linda Darnell.  She only made six films in the US and a few more in the UK before retiring from the screen.  Amazed that the film became a cult classic, later in life she participated in panels celebrating Gun Crazy, including one at the Noir City Festival at San Francisco’s Castro Theater in January, 2013.  She spoke about how much freedom she and her co-star were granted on such a low budget production, and how, on the cheap, with a 30 day shooting schedule, there were few retakes, and the film was shot mostly in sequence.  There wasn’t really a costume designer, most of the clothes she wore were her own, like the terry cloth bathrobe and the beret (a style she had always favored). 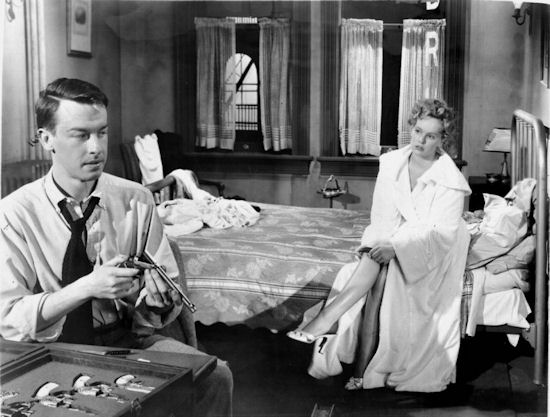 Bart as a boy is played by Rusty (Russ) Tamblyn, an actor and dancer whose dancing skills were showcased as Riff, in West Side Story and in  Seven Brides for Seven Brothers.  His parents were actors, and he started became a child actor at 10. He was nominated for an Oscar for Peyton Place and continues to act.  His daughter, Amber Tamblyn, also has a successful career, she’s currently on tv in Two and Half Men.

Bart loves guns because they make him feel like “somebody.”  American society, unlike in many other parts of the world, values the pursuit of happiness, individuality and success at the expense of communal values, which sometimes contributes in film noir, to the pursuit of crime when more conventional pathways fail.  The work ethic is glorified in American film, but for Bart and Laurie, a job looks like too much work, when it’s so easy to steal and kill for a living.

One of the most striking scenes in the film is the bank robbery, running in an unbroken 3 ½ minute shot, photographed from the back seat of the getaway car.  Lewis explained in detail how the car was rigged for the shot, and how, amazingly, it was shot off the cuff.

“We had the script girl, the head grip, the cameraman, soundman, myself, everybody squeezed into the back of that car, while John and Peggy sat in front.  We didn’t make any dry runs at all.  Everybody was instructed as to what we were going to be doing.  We started a mile out of town.  John and Peggy knew the intent and content of the scene, improvised their own dialogue, and generally played it by ear.  For example, they didn’t know where they were going to park.  I wanted it that realistic.  It so happens, a car pulled out as they drove up.  Otherwise, she was going to double park.  We made two takes…(used) the second one.  Off-screen there were people that yelled, ‘They held up the bank.’ It was so real and none of the bystanders knew what we were doing.  We had no extras except the people the policeman directed.  Everything—cars, people—was there on the street” (Kitses 47). 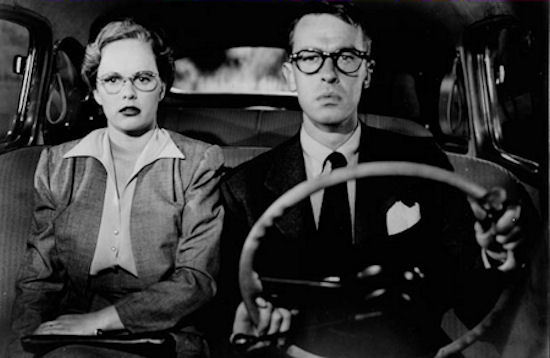 As Jim Kitses writes in his BFI book, “in noir, all of American is gun crazy, the inevitable dark-side effect of aggressive patriarchal capitalism fuelled by a violent national history and ideology” (Kitses 34). “Ferociously a classic in its form, subversive in its point of view, Gun Crazy is B movie poetry, B movie tragedy, B movie movie” (Kitses 70). 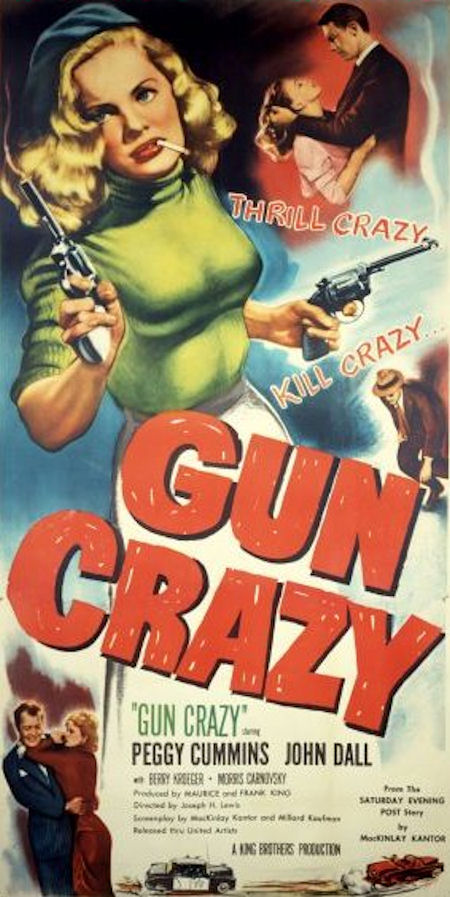