A fictional day in the life of the Fab Four careens twixt “a train and a room, and a car and a room, and a room and a room.” Fleet, jaunty and irreverently funny, it brilliantly played into every teen girl’s fantasy of what it would be like to Meet the Beatles. Matchless score (written in a week and recorded in 4 days) highlights the best rock and roll movie ever made. “We weren’t interested in being stuck in one of those typical nobody-understands-our-music plots where the local dignitaries are tying to ban something as terrible as the Saturday Night Hophow could we have faced each other if we had allowed ourselves to be involved in that kind of a movie?” (John Lennon).

A Hard Day’s Night was meant to be an exploitative quickie, banged out before the Beatles’ flame flickered. But, being movie fans themselves, the group wanted something more substantial. American expatriate director Richard Lester never dreamed how influential his $500,000, seven week shoot would become. When accepting an MTV award 10 years ago as “The Father of the Music Video” he asked if he could have a blood test.

Lester first encountered the Beatles in 1963. He’d already directed a rock film, It’s Trad, Dad, in which Gene Vincent sang “Spaceship to Mars” in a white leather suit. But it was The Running, Jumping and Standing Still Film, a comedy short starring British radio icons The Goons (think Saturday Night Live on the BBC) that was the blueprint. The Beatles thought the movie brilliant, and Lester was the only director they ever considered. His vision for them was in hand-held, jump-cut black and white, a fictionalized “day in the life” documentary with surreal touches.

Alun Owen, a playwright who had grown up in Liverpool, was recruited to spend some time with the lads and absorb their personalities. Paul said, “The important thing is that Owen didn’t attempt to turn us into characters that we weren’t.” Owen did make things up, for example the slang word “grotty” for grotesque. But he captured their mocking humor, one of the touchstones that set them apart from past rock ‘n’ rollers, especially the “Yes, Ma’am” politeness of the aging Elvis Presley. Most of the film was scripted, but didn’t seem to be; and the Fabs’ glib attitude was fresh and liberating.

Owen wrote “We’re not going to have a story that ends up at the (London) Palladium with the vicar smiling and giving the thumbs up sign from the stalls. Nothing like that. The thing about the boys is this great joy of being ALIVE that they put across. They’re so ebullient–it knocks me out. They affirm.” McCartney added, “The important thing is that Owen didn’t attempt to turn us into characters that we weren’t. Those parts of the film where they did, just didn’t work and they ended up on the cutting room floor. The secret to the success of A Hard Day’s Night was that there was a little of our own personalities in it.” The Beatles began filming right after returning from their triumphant first American tour, and A Hard Day’s Night is a record of Beatlemania at its giddy peak. Although, Lennon said later, “That was a comic strip version of what was actually going on. The pressure was far heavier than that.” 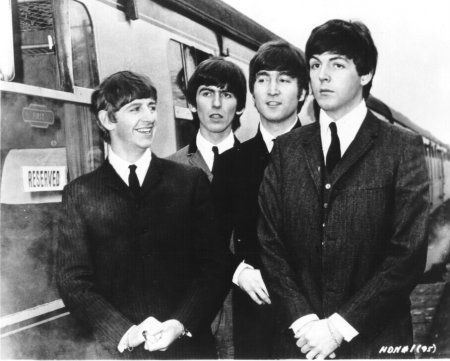 Lennon and McCarney’s musical fecundity is still staggering. They would get together, as they had since their teen years, and easily knock off a song a day, disappointed if they couldn’t get a finished number in 3 or 4 hours. They worked together, but also separately on songs. Without a cassette recorder or the ability to notate music, they had to rely on their memories to remember their compositions until the recording session.

The title of the film was a crack of Ringo’s, amending a remark about having a hard day to include the late hour; “You mean a hard day’s night, don’t you?” His much admired riverside ramble was filmed on a day he had a raging hangover, having arrived on the set for his 5:00 a.m. call straight from a night on the town. The first dialogue scene on the train was shot first, and the Beatles were always mortified when they saw it, hyper-aware of their nervousness at suddenly being film actors.

The Beatles are impossibly young here, George just 21 and Ringo the oldest at 24. “A Hard Day’s Night forever freeze-framed an image of The Beatles the world still clings to affectionately.” (Roy Carr). “In 1964, what we think of as ‘The ’60s’ had not yet really emerged from the embers of the 1950s. Perhaps this was the movie that sounded the first note of the new decade–the opening chord on George Harrison’s new 12-string guitar.” (Roger Ebert). 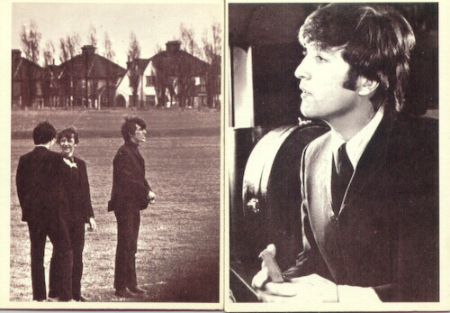 (Left) Card #3 “The Beatles left the studio sets to film this scene outdoors. When any outdoor scenes were shot, it wasn’t announced in advance. The movie producers always feared that the set would be swamped with fans of the Beatles.” (Right) Card #33 “John Lennon gets ideas for new songs almost everywhere. During the filming of A Hard Day’s Night, he and Paul would often get together during a break to work on some new material.” 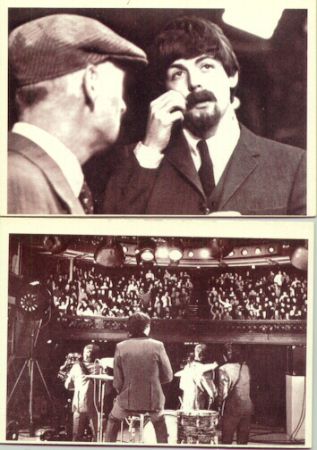 (Top) Card # 20 “Who is the man in the beard? Yes, it sure is Paul McCartney. Maybe loyal Beatles fans can’t be fooled, but Paul’s grandfather doesn’t see beneath the whiskers. Granddad is too busy plotting against the boys.” (Bottom) Card #39 “The Beatles are onstage in the Scala Theatre in Soho performing ‘Can’t Buy Me Love.’ The fans in A Hard Day’s Night that are pictured in the audience were actually paid to come and watch The Beatles perform. Can you imagine that?” (Triva note: one of those gawky fans is a very young Phil Collins). 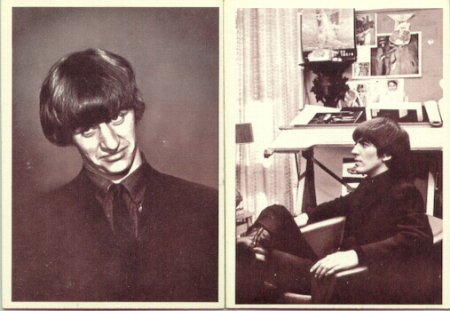 (Left) Card #28 “Ringo looks a little unhappy, according to the script, because Grandfather has been up to his old tricks again. Grandfather has been needling our Ringo continually and has convinced the world’s greatest drummer to leave the group.” (Right) Card #51 “Beatle George Harrison relaxes in his dressing room waiting for the word to begin the next scene of A Hard Day’s Night. Of all four of the Beatles, critics agreed that George revealed the most talent as an actor.” (This is, of course, a scene from the film, not a candid shot.) 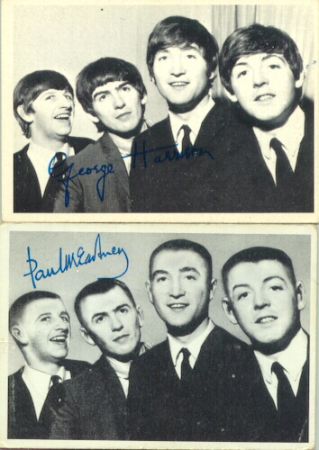 Parents found the Beatles’ long hair threatening, dangerously blurring the boundries between masculine and feminine. Young (now middle-aged) Beatlemaniacs found the style quite sexy, however, and could easily tell the boys from the girls. Pioneering “moptop” teens risked censure both at home and at school. Authority figures dreamed of the haircuts they hoped would reinstate the status quo.

(Photo from Jerry Ohlinger’s Movie Material Store, bubblegum cards from Moviediva’s collection. Sources include The Beatles Anthology by the Beatles, Beatles at the Movies by Roy Carr, Beatles Companion by Ted Greenwald, Men and Women: Dressing the Part by Claudia Brush Kidwell and Valerie Steele, internet reviews by Roger Ebert and David Edelstein on Slate).