A princess fleeing through enemy territory is escorted by a brave warrior and two squabbling friends. This sweeping historical epic is a rip-roaring adventure filled with humor and excitement, and Star Wars director George Lucas was inspired to created his own mythic drama by this most lighthearted of of Kurosawa’s magnificent samurai films.

Akira Kurosawa was born in Tokyo in 1910, the youngest of 7 children. His father was strict, a military officer, but was also receptive to Western culture at a time many educated Japanese were not. He took his family to European and American films in Tokyo and his children were raised on a beloved 78-record album of “The World’s Best Classics.” Kurosawa’s rebellious older brother, Heigo, wrote on foreign cinema, and was a benshi providing narrative descriptions at silent film screenings. Heigo’s suicide when Kurosawa was a young man affected his brother deeply.

Kurosawa worked as an assistant director for several years. His is first film as a director, the judo adventure Sanshiro Sugata (1943) was a big hit. He first collaborated with his long-time star, Toshiro Mifune, in Drunken Angel (1948). Several years later, Rashomon won raves in the international press and the 1951 Oscar for Best Foreign Film. In Rashomon, Mifune played a 12th century bandit accused of rape and murder. His story is told in four hypnotic flashbacks, each telling a version of the truth from different points of view. “Admiral Perry and his Black Ships steamed into Tokyo Bay in 1853 and forced the opening of Japan to the West; Akira Kurosawa’s Rashomon came steaming into the Venice Film Festival and opened up the West to Japanese films.” (Desser) Kurosawa’s work began to be acknowledged as the legacy of one of film history’s undisputed geniuses.

Japanese historical films frequently are set in one of two time periods, that of the civil wars shown in The Hidden Fortress or the later time of peace, the Tokugawa era, which began in 1600 and ended with the opening of Japan to the West. In the Tokugawa era, the warriors found themselves as unemployed and unemployable, yet still with the burden of their strict warrior’s code. The Hidden Fortress is set in the earlier period, the 16th century, and Kurosawa’s masterpiece, The Seven Samurai, deals with this later period. Like the American Western, the samurai film mythologizes a time and place in each country’s history. In Japanese they are both jidai-geki or period films, as well as chambara or sword dramas.

Influential in his own country as well as abroad, Kurosawa’s samurai films were imitated and remade. American Westerns like The Magnificent Seven, The Wild Bunch, the Italian “spaghetti Westerns” of Sergio Leone like The Good, The Bad and the Ugly and A Fistful of Dollars, and even the Indian “curry western” Sholay, directed by G.P. Sippy, owe a heavy debt to Kurosawa. David Desser points out that Kurosawa, like John Ford or Howard Hawks, is “a great filmmaker not because he can turn a classic of literature into a great film, but because he can take a routine and highly codified formula story and turn that into a work of art.”

After making Throne of Blood (based on Shakespeare’s Macbeth) and an adaptation of Maxim Gorky’s The Lower Depths Kurosawa decided, “No heavy themes on the next film. I want to make a 100% entertainment film, full of thrills and fun.” He wrote the script in playful collaboration, “Every morning I created a situation which allowed no escape for the general and the princess. Then, the other three writers made desperate efforts finding a way out. This was how we wrote day by day. I wanted to make an invigorating historical spectacle.” (Galbraith). Kurosawa embraced the adventure film, but by making the earthy, bellyaching farmers the main characters he subverted genre conventions at the same time.

Kurosawa was eager to experiment with a wide-screen format in this film. He was inspired by the compositional possibilities of what his studio called Toho-Scope. Wide-screen processes in the West, like Cinemascope, were often linked with color photography, but Kurosawa composed striking black and white images. He never returned to the square screen, often using the edges of the long, narrow image, and a mobile camera which sweeps across the vistas. A 10 day location shoot stretched into 100 days when 3 successive typhoons devastated one location after another.

The audience at the NC Museum of Art screening was swept up in the drama, spectacle and comedy of the excellent print from Criterion Pictures, laughing and cheering, and applauding at the end. The new subtitles are doubtless an improvement over the old, although a hint of contempory slang crept in, as the 16th century Japanese peasant complains, “This sucks.”

Hundreds of actresses were auditioned for the princess until the director found 20 year old Misa Uehara. Her career lasted a scant three years, but Kurosawa was taken with her freshness and what he called her “miraculous eyes.” At first, there was a photo of Elizabeth Taylorin her dressing room to inspire the make-up artist. But then Kurosawa settled on a look for her based on traditional Japanese drama, a Noh mask, since the film also uses Noh story structure and Noh music, linking The Hidden Fortress to mythic Japanese archetypes. Uehara recalled enjoying the experience, except for the one day that she tried to cry and couldn’t. A sliced onion didn’t bring tears, but when she realized that the crew couldn’t go home until the shot was completed, her tears flowed. Her electifying performance was an audience favorite.

Star Wars director George Lucas was inspired by the characters and plot of The Hidden Fortress. But more so he admired how the viewer was plopped in the middle of a story without explanation, creating a vivid context without specific details. In The Hidden Fortress the regional wars and rivalries are unexplained and the unfolding action predates the beginning of the film. Lucas found this a useful technique since Star Wars would begin in the middle of what he hoped would be his own mythic cycle. As Vernon Young wrote presciently of The Hidden Fortress in 1961, “With no time to wonder where we are—in what century—or on which planet—we are sucked into the events like gulls into a cyclone.” (Goodwin) Said Kurosawa diplomatically of his disciple’s Star Wars: “I’m not a critic, I just like it.” (Galbraith). 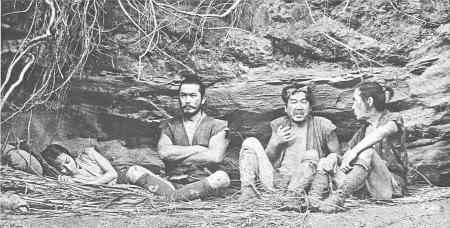