Rob makes lists.  It helps him make sense of things–if he reviews his top five breakups, can he do better next time?  Nick Hornby’s novel spun vinyl in London, now shifted to Chicago and set to a killer soundtrack, it remains delightfully true to the spirit of pop culture obsessives.  “High Fidelity, with its knowing take on men, messed-up romance and music, is like one long, hook-filled pop song for the eyes” (Philadelphia Inquirer)

High Fidelity is based on a novel by Nick Hornby.  He first published a book of essays in 1992, and the same year a memoir, Fever Pitch, detailing his fanatical obsession with the Arsenal Football Club.  It was made into a movie twice, once in England starring Colin Firth, and in the US with Jimmy Fallon, his sporting passion transposed onto the Boston Red Sox.  High Fidelity was his third book and first novel.

A smash hit, selling millions of copies, it was adapted into this film in 2000.  His second novel was also adapted into a film, About a Boy, starring Hugh Grant and Nicolas Hoult.  Hornby has continued to write, a subject particularly close to his heart is pop music, as evidenced by tonight’s film.  He’s also in demand as a screenwriter, and has been twice nominated for an Oscar, for An Education and Brooklyn.

Optioned by Disney, the studio sent the High Fidelity to John Cusack, who’d written Grosse Point Blank with two of his high school friends, D. V. DeVincentis and Steve Pink.  Cusack said, “that many young men can identify with Rob’s inner monologue, which is spoken through great, incisive writing. It’s a very funny book, but he also captured this particular type of character with brutal honesty. And it’s actually kind of strangely romantic in a way, so I felt the combination of all those things was really remarkable” (The Distracted Globe).

The setting for the film was changed from North London to Chicago, because the writers were more familiar with the American city.  John Cusack said, “When I read the book I knew where everything was in Chicago.  I knew where the American Rob went to school and dropped out, where he used to spin records I knew two or three different record shops when I was growing up that had a Rob, a Dick and a Barry in them.”  It also flips British Rob’s obsession with American R & B to American Rob’s preoccupation with British New Wave and punk. Hornsby echoes Cusack’s comment about the universality of this male experience, many men would come up to him and say, ‘This book is about me – literally, this book is about me.’ I’ve been told, I don’t know how many times, ‘I know the record shop you wrote about,’ and the shops in some part of the country I’ve never been to. It’s a fairly depressing indictment of the state of things, I think” (The Distracted Globe).

John Cusack is from Evanston IL, born into an Irish Catholic family, the 4th of five children.  His father was an actor and filmmaker, and his siblings Ann, Joan, Bill, and Susie are also actors.  His parents were political activists, and close to the Berrigan Brothers, the dissident priests.  After a year at NYU he began acting in films.  He was nominated for many awards for this film, for both writing and acting, including a Golden Globe, Writer’s Guild and a BAFTA.

Director Stephan Frears didn’t necessarily connect with the material, since it was for a generation younger than him, but wanted to work with John Cusack again, after previously directing him in The Grifters.  And he did not think it an issue that Rob was now American.  In the book, ”Rob is mental, stoical, a passive observer. And quite glum. And I think this is one of the differences between English and American actors. American actors like to do things, they want to be engaged in things, they want the audience to like them, even if their characters are doing some not so likable things. So, I was enormously relieved to be doing it in America. To have left that English glumness of it was a great relief. Now I’m sure I’ll be spat at on the streets when I return” (NY Times).  Frears also felt that Americans had the sexual confidence that the English lacked, and he didn’t want Rob to be to “neurotic” about his relationships (The Guardian).

”Rob, like a lot of Nick’s characters, is a guy who ought to know better than to be the way he is,” Mr. Cusack continues. ”And in fact, he does know better. He’s a lazy, delusional slacker, but he’s brutally honest with himself, and has these terrifically incisive insights, and that’s what makes him redeemable. Rob does a lot of things where he messes up, and those were fairly easy to show. But the inner, more confessional aspects were harder. Almost immediately we thought, let’s just do what Michael Caine did in ‘Alfie’ ” — speak directly to the camera — ”but then I vetoed that idea. I thought there’d just be too much of me. But then Frears brought it up, and we went with it.” (NY Times).

Frears was also determined to keep Jack Black on board, this of course was a star-making role for him (Black is worth, as of 2017, $30 million).  “Jack’s a bolter,” says Frears, “and I brought him back twice because I had faith in him (The Guardian).  Black grew up in Santa Monica California, where his rocket scientist parents divorced when he was 10.  At 13, he was in an Atari video game commercial, but then torpedoed his middle school cool in an ad for Smurfberry Crunch cereal.  He dropped out of UCLA to join Tim Robbins’ The Actors’ Gang.  Robbins cast him in his first film role, and then in all the films he directed. “People say, “Oh you discovered him”,’ Stephen Frears says, ‘but you haven’t, it’s just that you’re present when they decide to let rip. If I’m being honest, I think he kept his head down and then for some reason decided to lift it.’ (The Guardian).

Iben Hjejle is a Danish actress, who was discovered at the Berlin Film Festival for her role in the Dogme film, Mifune’s Last Song.  She has spent most of her career in Danish television.

A certain celebrity musician cameo came to pass because of Cusack’s personal friendship. The screenwriters cared deeply about Rob’s music and listened to 2000 songs before settling on 70.  In June 2010, Chicago Magazine ranked it #1 movie ever filmed in Chicago.  The Wicker Park neighborhood in which it was filmed was already gentrifying, and many locations from the film may be a bit hard to find.

There is one kernel of wisdom here, that I’ve reflected on many times, that you are leaving all your options open open open, and all of a sudden, that very openness has closed off your options.  Life, like comedy, is all timing.

“Mr. Cusack and Mr. Frears know they have not undertaken a simple assignment; adapting a beloved book, no matter how faithfully, is an invitation to criticism” (NY Times). Well reviewed and a modest success, High Fidelity has gone on to be somewhat of a cult film.  Hornby said, “I never expected it to be so faithful. At times it appears to be a film in which John Cusack reads my book” (The Distracted Globe). ”It’s a really good movie,” Nick Hornby says. ”All authors should be so lucky” (NY Times). 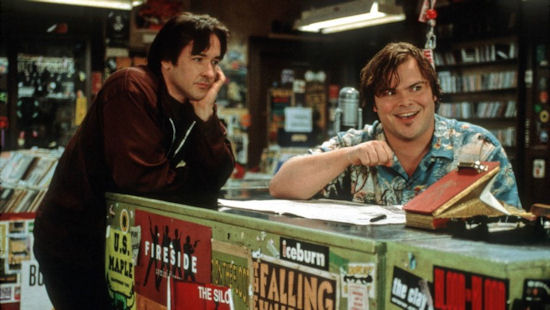