The Front Page by Ben Hecht and Charles MacArthur, a hard-boiled comedy about Chicago cops, urban corruption and the newspaper business, gets a gender reversal overhaul, outing the workplace romance of Walter Burns and Hildy Johnson, both male characters in the 1928 original. In this breathless masterpiece of the screwball era, Grant and Russell chatter, fuss and fight at a breakneck pace in this most successful adaptation of a classic work of the American stage.

Howard Hawks was an independent director and producer during the studio era in Hollywood. He signed only short term contracts and was never beholden to one employer for long. In 1940, he was working for Columbia, and in a great, apocryphal (meaning unsubstantiated) story, he related the evening where, during an after dinner play reading, he decided to read the part of Walter Burns in The Front Page and gave the part of Hildy Johnson to an unidentified young woman. The success of this switch convinced him of the rightness of reworking the play to accommodate transforming the main character from Hildebrand to Hildegarde. Certainly, in the original, there was a dangerous hint of the Love That Dare Not Speak Its Name when, after being gifted by Walter with a watch, Hildy says, “Aw, Walter, you make me feel like I’m a fairy or something” revised to “…make me feel like I’m the bride” in the 1931 version of The Front Page.

Ben Hecht observed in his autobiography, Child of the Century, that the only characters who have fun in the movies are not nice, and he resolved to write for them, exclusively. When Hawks called Ben Hecht to ask if he could make Hildy Johnson a girl, Hecht replied, “I wish I’d thought of that” (McBride). The original authors were unavailable to help with the screenplay, although they both wrote for the movies, but Charles Lederer, who had brought the earlier version of The Front Page to the screen, was signed on. It was he who solidified the plot by establishing that Hildy was Walter’s ex-wife, setting the stage for their quarrels. Morrie Ryskind, who had written for the Marx Brothers among others, added comic dialogue. Another major change showed how love and work were tightly intertwined in Walter and Hildy’s relationship. Hildy got a scene where she was actually shown at work, conducting a jail cell interview, which strengthened her character, and her joint professional and personal need for Walter. The first 20 minutes of the film are prologue to the action of the play, establishing character and setting the scene. For those of you who saw the Chapel Hill Playmakers’ revival of the play late last year, it’s striking how fresh the rough language and unrepentant cynicism remains. In both the 1931 Pre-Code version (which sadly starred Pat O’Brien instead of Lee Tracy, who had created the role of Hildy Johnson on stage and played a variation of it many times in the movies) as well as this 1940 one, much the dialogue in Hecht and MacArthur’s play was unsuitable for the movies. Another change, unremarked in the sources I consulted, was that Walter Burns does not appear in the same scene with Hildy until relatively late in the play.

Cary Grant was born Archibald Leach in Bristol, England in 1904. At 15, he ran away from home and joined the Bob Pender Group of Acrobats, and over the next few years acted in skits, stilt-walked, tumbled and danced on tour throughout Britain. He arrived in the US and worked on stage in New York before landing a Paramount contract in 1932. His gift for comedy didn’t become apparent immediately, but after Topper, The Awful Truth and Bringing Up Baby, his looks, charm and skill, not to mention his unexpected physical comedy abilities, made him among the greatest of Hollywood stars. He is at his creative peak in His Girl Friday. Tony Curtis observed, “In this movie, Cary is at his very best. He’s brash, cocky, scheming. He switches from likeable to unlikable in a blink. Yet, he has so much charm despite the despicable character he represents. And, still he keeps smiling. Nobody plays Cary Grant like Cary Grant.” (Morcambe). 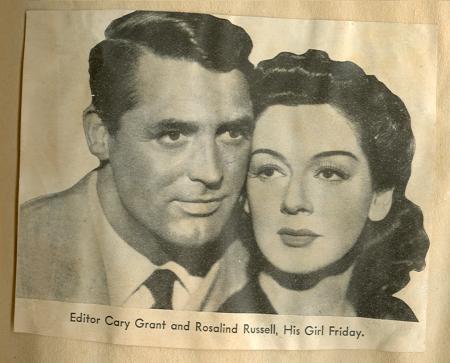 Hawks had a tough time casting the role of Hildy. Jean Arthur had been the first choice, but she had just worked with Hawks on Only Angels Have Wings, and for whatever reason was not keen to repeat the experience. Ginger Rogers, Claudette Colbert, Carole Lombard, and Irene Dunne all refused. Rosalind Russell was the eventual choice. Russell, named Rosalind by her parents after a boat on which her pregnant mother vacationed, was born in Waterbury, Connecticut in 1908. She was one of seven children, and a tomboy. In her teens she became interested in the theater and attended the American College of Dramatic Arts in NYC. She came to Hollywood in 1934, and ended up signing with MGM. Uncertain how to market her, since her cheesecake potential was negligible; they ended up promoting her as a classy clotheshorse. Most of her early roles were serious, but after she lobbied George Cukor for the role as the poisonous Sylvia Fowler in The Women, her comic gifts became apparent, too. 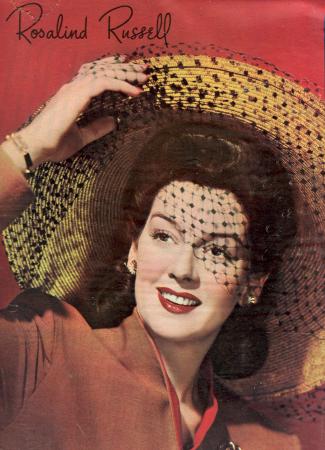 She was not pleased at being a last ditch choice for the role of Hildy, and was determined not to like the director. Cary Grant had already made two films with Hawks, including the screwball comedy Bringing Up Baby, and the director trusted him to the extent of allowing him to improvise dialogue and business of his own. During their first scene together, Russell was unnerved that Hawks watched her and said nothing, but Grant reassured her, “Oh sure, Roz, if he didn’t like it, he’d tell you.” Finally, she confronted him and he confirmed, “You just keep pushing him around like you’re doing.” Russell wrote, “He’d been watching Cary and me for two days, and I’d thrown and handbag at Cary, which was my idea, and missed hitting him, and Cary had said, “You used to be better than that, and Hawks left it all in. It’s a good director who sees what an actor can do, studies his cast, learns about them personally, knows how to get the best out of them.” (McCarthy).

Russell was dressed by Robert Kalloch of Columbia. A master of stripes, he also designed what may be cinema history’s most famous striped ensemble, the one that Claudette Colbert wears throughout most of It Happened One Night. The character of Hildy Johnson, as well as that of many other female reporters, was supposed based on the Hearst papers ace Hollywood reporter, Adela Rogers St. John, who dressed in striped suits. Kallock dresses Hildy in what should be conservative office mufti, but its wild collision of cut and pieced sections hints at Hildy’s conflicting desires. 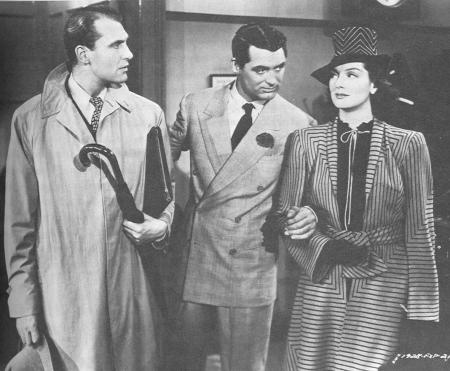 As was his habit, Hawks shot in sequence and with one camera. Because of the complexity of some of the shots, the film went 7 days over the scheduled 42. Hawks also wanted the speedy dialogue even faster, and had the writers construct dialogue in which the beginning and endings of sentences overlapped, and had the actors speak twice as fast as normal. Because of this, Hawks replaced the standard boom mikes with multiple mikes to record dialogue with greater clarity. But, they couldn’t all be on at once, and a frenzied sound engineer had to speedily switch recording from mike to mike. Grant and Russell ad libbed and rough housed on the spur of the moment, encouraged by their director. Once, Russell’s improve caught Grant so off balance that he broke character, made a face at the director and the camera, asking, “Is she going to do that?” Hawks left it in (although it’s not in the final cur) as well Grant’s audience pleasing references to “Archie Leach” (Grant’s real name) and “Ralph Bellamy.” Columbia studio chief Harry Cohn howled at the latter but was persuaded to leave it in—and it became one of the films best remembered moments. 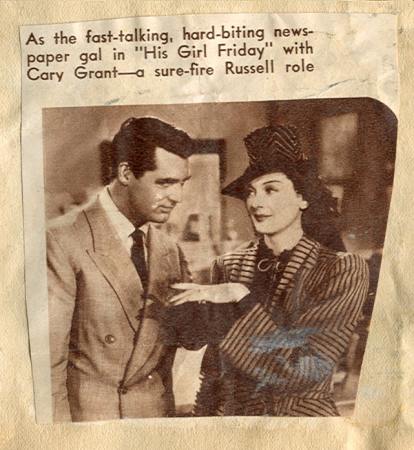 One thing that Hawks had learned from Bringing Up Baby, was that you need some “straight” characters to contrast with the loony ones, so most of the characters play their roles seriously. Cary Grant loved the film so much that he planned to buy the screen rights himself in the mid-50s and remake the film with Grace Kelly.

Gerald Mast points out that the film’s conflicts, male vs female, vocation vs love and words vs feelings are typical of Howard Hawks’ comedies. The films centers two big lies, that Walter is interested in Hildy only as a reporter and Hildy’s lie to herself, that she would be happier if domesticated. James Harvey says, “It would be hard to overstate, I think, the boldness and brilliance of what Hawks has done here: not only an astonishingly funny comedy, but a fulfillment of a whole tradition of comedy—the ur-text of the tough comedy appropriated fully and seamlessly to the spirit and style of screwball romance. His Girl Friday is not only a triumph, but a revelation.”

Molly Haskell sees Hildy’s crying at the end of the film in an interesting light. She sees her tears as frustration, as her feminine and professional natures collide. “The tears that are taken as a sign of woman’s helplessness are indeed that, but of a different kind of helplessness than is usually assumed: not a physical but an emotional impotence, an inability to express anger at a male authority figure, to whom one is conditioned to defer. The anger and its frustration, turning in on itself, comes out as tears.” But, at the end, Hildy recognizes that she can be a newspaper professional and still retain her womanly appeal.

Hildy is attracted to Walter (not just because he is Cary Grant, although that must certainly count for something) because she can’t help but admire his scoundrelly rule-breaking, even as she yearns for a mate who always behaves himself. Even in the context of a conventional happy (?) ending, Walter has certainly not been domesticated. For feminists looking for role models in the Hollywood studio era, they can’t do better than the sharp-dressed, sharp-tongued working woman, Hildy Johnson. The audience at the NC Museum of Art screening laughed so much, at every hilarious expression on Grant’s face, as well as the rapid fire dialogue, that some lines were obscured. Movies just aren’t funny like this anymore. 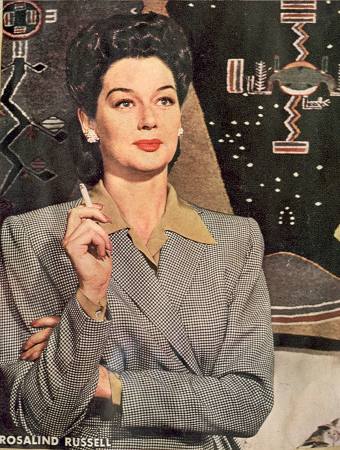