“There are films I would see every other day if I had the time: 8 1/2, Kubrick’s Lolita, Sunset Boulevard, Hour of the Wolf from Bergman, Rear Window from Hitchcock, Mr. Hulot’s Holiday or My Uncle from Jacques Tati, or The Godfather. I want a dream when I go to a film. I see 8 1/2 and it makes me dream for a month afterward; or Sunset Boulevard or Lolita. There’s an abstract thing in there that just thrills my soul. Something in between the lines that film can do in a language of its own — a language that says things that can’t be put into words.”-David Lynch on salon.com

Jacques Tati wrote, directed and starred in only 5 feature films between 1948 and 1974, and in all but the first he plays the character, M. Hulot. Hulot isn’t an unusual name in France, and Tati may have borrowed it from an architect he knew with a peculiar walk. But, “Hulot” strongly echoes “Charlot,” Charlie Chaplin’s French nickname. Tati owes debts to both Chaplin, for his pantomime skill and use of sound effects, and Buster Keaton for his insistence on wide-angle shots. When Blue Velvet director David Lynch speaks of his admiration for Tati, one reason is that absorbing the rich detail of Tati’s cinematic world encourages multiple viewings. Tati does not focus the camera on one object in the frame; there are many things happening on the screen at the same time. Roger Ebert likens repeated viewings of Mr. Hulot’s Holiday to visiting the same resort, summer after summer.

Jacques Tati’s grandfather was the Dutch frame-maker who built Van Gogh’s frames, and Tati was expected to enter the family trade. Much to his parents’ disgust, he became a mime and then began to get bit parts in movies. He longed to record his own comic routines and made a short film about Francois, a rural postman. Francois’ adventures were expanded into a feature, Jour de Fete, in which he becomes obsessed with American efficiency and is determined to apply the methods (unsuccessfully) to his bicycle delivery route. The film was printed in an idiosyncratic black and white process, with selected objects in certain scenes hand colored.

Jour de Fete‘s enthusiastic reception led to M. Hulot’s Holiday, the second of Tati’s “films de copains” made with his friends on a low budget. M. Hulot observes the vacationers who work stifling jobs all year so they can spend a couple of weeks at a tacky seaside hotel in a frantic quest for relaxation. M. Hulot’s Holiday unhurried pace is a vacation for the audience, as the camera drifts back and forth from the beach to the hotel, and then, as they begin to seem familiar, a bit farther afield. Hulot’s spontaneity is an intrusion in the comparmentalized resort world. His eccentric clothes, odd gait and gawky height set him apart from everyone, but Tati is careful to stress Hulot’s ordinariness. The strangeness of Hulot’s gestures, his bizarrely successful tennis serve for example, give him an alien quality.

“Hulot is not a doer,” says Tati. “He is perhaps more childish. He does not dare. He is not necessarily funny to everybody. Some spectators do not laugh at him.” 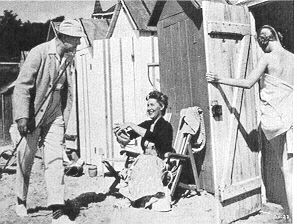 The movie may look improvised, but is meticulously staged. Tati shot for over a year at St. Marc sur Mer in Brittany. When he made this film, summer vacations were not the institution in France they are now, when Paris is deserted by Parisians in the month of August. In 1953, workers had only two weeks vacation, few traveled, since hotels were expensive, and only one person in 25 owned a car. The 1924 Amilcar Hulot drives may seem a comic invention, but it and the other bizarre autos are typical of the postwar period. Critic Andre Bazin called Hulot “a scatterbrained angel,” and his seaside holiday was the greatest international success of his inventive creator. Tati’s whimsical comedy is about the universal human need to inhale sea air, and listen to the rhythm of the waves.

(Photo from Daniel Blum’s 1958 A Pictorial History of the Talkies. Tati quote from December, 1958 Films in Review article by Yvonne Gerald.)