“The Overgrown Calves” is a buddy movie about five aimless young men carousing, goofing off and contemplating their grown-up futures in Post-War Italy. Fellini’s first international hit is an unforgettable view of post-adolescent malaise. It won the top prize at the Venice film festival, and its autobiographical elements will resonate both with anyone who fondly recalls a group of youthful pals, and those who relish Fellini’s career.

Fellini was a storyteller. Many people wrote books about him…there must be about 40 or so in the Duke University Library, not counting the histories of Italian film. He reveled in the interviews that journalists from around the world flocked to conduct with him. Some of his autobiographical tales were fairly consistent from telling to telling, but many were not. Each vignette presented as a memory…or a memory denied…is suspect. This sketch of his life is beholden to the most oft-repeated stories, but the veracity is always questionable.

Fellini was born in Rimini, Italy, a resort town on the Adriatic Sea. He was not particularly close to his family, and his father often traveled for business. Rimini was besieged by tourists in the season, and filled with entertainments. His mother said, there was “no hope of getting Federico to school when the circus was in town” (Murray). He may or may not have run away to join the circus—this is one of the most suspect tales—but did make money off his talents as a caricaturist. At first, he aspired to be a journalist, “I had seen so many American films in which newspapermen were glamorous figures…that I decided to become one, too. I liked the coats they wore and the way they wore their hats on the backs of their heads.” He managed to evade military service for one reason or another and after Liberation made money cartooning the resident American GIs.

He approached the fringes of the cinema world working as a gag and rewrite man, did short illustrated pieces for a comic paper, and wrote radio sketches, including for a show about a young married couple, Cico and Pallina. He fell in love with the voice of his Pallina, Giulietta Massina, who would soon become wife, muse and star. In 1945, Roberto Rossellini requested that Fellini ask one of his friends to act in a short film he was making about the Occupation, which evolved into Rossellini’s neo-realist masterpiece, Open City. Fellini ended up contributing to the script, “Rossellini was the man whose example and personality first inspired me to realize that the cinema was the means of expression best suited to my nature. It was in this sense that he gave me something fundamental. It was meeting him that guided me onto one path rather than another” (Alpert). He worked on the script and was the director’s assistant on Rossellini’s next film, Paisan, and fulfilled both these roles and played St. Joseph in Rossellini’s The Miracle, a scandalous film about a simple woman who believes that her baby is the result of an Immaculate Conception. Fellini made his first film as a director, Variety Lights, in 1950.

Fellini’s second film was The White Sheik, a parody of celebrity worship, and his third was I Vitelloni, his first film to garner widespread critical acclaim, as well as international distribution. I Vitelloni translated as “overgrown calves,” a slang expression applied to loafing young men financially supported by their families (Fellini said he’d been called a vitelloni) or may be a variation on vaudellone, “big gut” referring to someone who would rather eat than work. “They are not rich enough to be called wastels or poor enough to be bums” (Baxter). The director described his characters, “They are the unemployed of the middle class, mothers’ pets. They shine during the holiday season, and waiting for it takes up the rest of the year” (Burke).

After The White Sheik, Fellini wanted to direct his script, La Strada, but his producers insisted he choose another subject. They objected to the lack of stars in his plan for I Vitelloni. Fellini’s first two films had been financial disappointments, and he was pressured to cast actor-director Vittorio De Sica in the small role of Natali, as insurance, which De Sica declined. The character of Riccardo was played by Fellini’s younger brother Riccardo, something of a vitelloni himself. His part is smaller than the others, perhaps to deemphasize the autobiographical elements. However, it is Fellini’s voice as the narrator.

The film was photographed in Viterbo, a town near Rome not unlike Fellini’s hometown of Rimini. The director denied that his script was set in his home town. Iit was more convenient to film in Viterbo, but surely he did not want to deal with the complex issues sure to arise if he filmed in Rimini. Moraldo is clearly the author-backed character, who shares the director’s love of long walks, even though all the protagonists embody differing aspects of Fellini’s personality.

The director found casting one of the most difficult challenges. He hated interviewing actors. Another director, Elia Kazan observed, “What he looks for is not a good reading, but an eloquent face…a face, he believes is a piece of sculpture that has taken a lifetime to mould, so it tells more than an actor’s technique possibly could” (Baxter). Franco Interlenghi’s audition for Moraldo consisted of his sitting in a heavily curtained Rome apartment, while Fellini, concealed behind the drapes, observed him. Eventually, Fellini would amass an archive of thousands of photographs from which he cast his parts, and actors reading lines for him would be a thing of the past.

Fellini clearly showed his strengthening grasp of the directorial medium, as he confidently interwove five stories. The moments of crisis all stem from a clash between the worlds of illusion, as exemplified by the beauty pageant, the movies, the carnival ball, the theater, and reality. These moments intensify the personal mythology that Fellini would return to again and again in his films. Neorealistic directors, like his mentor, Roberto Rossellini observed oppressive economic forces shaping the lives of his characters. Fellini considers the destructive forces of boredom, saying “All our anguish and mistakes occur when there is no love” (Murray).
Nino Rota’s score was an important part of the success of the film, and his collaboration with Fellini was a close one. The cinematography team mirrored the listless lives of I Vitelloni with a camera style dominated by slow tracking shots.

Although the film was easily selected for the Venice International Film Festival, and won the Silver Lion, the highest prize, finding distribution was still difficult. Prospective distributors hated Alberto Sordi, playing the character Alberto, insisting his name be removed from the publicity, and even from the film prints, and suggested Fellini film a happy ending where an oil well was discovered and all the protagonists become rich. Fellini resisted changing the Italian name to Vagabonds! but was unable to prevent American prints from carrying the ridiculous title, The Young and the Passionate.

Fellini said, “I Vitelloni is the story of adolescents who cannot see anything more in life than satisfying their animal desires—sleeping, eating, fornicating. I was trying to say there is something more, there is always something more. Life must have a meaning beyond the animal” (Murray).

“ My films don’t have what is called a final scene. The story never reaches its conclusion. Why? I think it depends on what I make of my characters…they cannot evolve in any way, and that’s for another reason. I have no intention of moralizing yet, I feel that a film is the more moral if it doesn’t offer the audience the solution found by the character whose story is told…if films like I Vitelloni, La Strada and Il Bidone leave the audience with this feeling mixed with a slight uneasiness, I think they have achieved their object” (Murray). 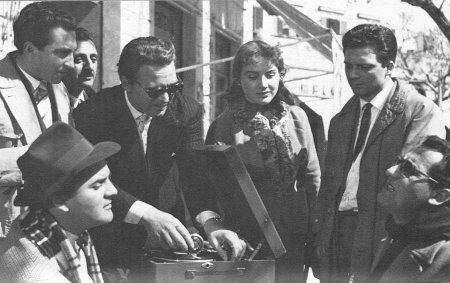