A meek bureaucrat smothered by numbing routine, using his rubber stamp to cancel out hope, learns he has only a short time to live. He decides to make one small difference in the world. A brilliant performance by Kurosawa’s other muse, Takashi Shimura in “one of cinema’s noblest, most humane pinnacles” (Elliot Wilhelm).

The international success of Kurosawa’s Rashomon had been almost a fluke. It would never have been released internationally if Giulliana Stramigioli, the head of Italiafilm in Japan had not been asked to recommend a Japanese film for the Venice International Film Festival and suggested Rashomon. Its run was long over and it had been virtually forgotten by its studio. An Italian subtitled print was struck and shipped and shortly, the first Japanese ever film ever entered at the film festival won the Grand Prize in the 1951 Venice Festival, beating out films by Renoir, Bresson, Kazan and Billy Wilder. Kurosawa did not even know the film had been entered. The American trade paper Variety gave it a rave review, and an English subtitled print was made to show to American servicemen stationed in Japan. Their positive reaction prompted a brief run at a theater in Los Angeles’ Little Tokyo, and it was then picked up for distribution by RKO.

It was extremely rare at the time for an American studio to distribute a foreign language film. RKO had only done it once before, a French film with Maurice Chevalier, already a star in Hollywood films. When Rashomon moved to NYC, it was the first Japanese film to play in the city since 1937. Good reviews and good box office resulted in Rashomon winning an honorary Oscar in 1951. There was no prize for best foreign language film at the time, so unusual was it for one to play in the US. The Japanese film industry thought their films could never be understood by foreign audiences, especially stories with historical settings and they were overwhelmed by the success of Kurosawa’s film (Galbraith 136-41).

Kurosawa’s next film was an artistic disaster, a four hour, 25 minute version of one of his favorite novels, The Idiot by Fyodor Dostoyevsky. Edited and reedited, each successively shorter version made less sense than the one previous.

Ikiru‘s theme evolved from Kurosawa’s own fear of death. “…I think—how could I bear to take a final breath? While living this life, how could I bear to leave it? There is, I feel, so much for me to do. I keep feeling I have lived so little. Then, I become thoughtful, but now sad.” He also intended to provide a window into contemporary Japan for international audiences. When he had accepted the Venice prize for Rashomon, he commented, “Everyone likes to receive prizes and so I’m happy…but I’d be happier if I were getting it for having shown something of contemporary Japan” (Richie 95).

Ikiru was filmed before Seven Samurai, but released after, and in the US, long after. Not exotic enough for American audiences expecting historical drama, when it was finally in theaters in this country, it would be considered a quiet masterpiece. The script was based on an original story by Kurosawa and one of his regular collaborators, Hashimoto. Now, the team was joined by Hideo Oguni, who would remain with him until Ran in 1985. Kurosawa trusted Oguni’s instincts more than any one else’s, and the unique structure of the film was his idea. Hashimoto said of Kurosawa, “He directed actors, of course, but he also directed the writers, and that was the hardest thing for him, because they’re stubborn, difficult people to direct. For him, the script was the foundation of a film (Galbraith 157).

The heart of Ikiru is leading actor Takeshi Shimura, included in many of Kurosawa’s works; this is arguably his greatest performance. He was born Shoji Shimazaki in 1904, and formed his own professional theater company twenty years later. He made his screen debut in 1934, and was in Kurosawa’s first film, Sanshiro Sugata (1943). He was in 21 of Kurosawa’s 30 features; Toshiro Mifune was in 16 of 30. Shimura’s last film for the director was Ran in 1980. They had a warm personal relationship, “Mr. Shimura is more than an actor to me. Since I met him, he’s been Opchan (dear uncle) to me” Galbraith 163). Shikura made films at every Japanese studio and in every genre in his long career; musicals, gangster movies, and even in monster movies like Godzilla. In period films he played priests, generals, samurai and in modern day domestic dramas, husbands, fathers and grandfathers. His acting in this film is unforgettable, as a man first bewildered by the approaching end of his life, and then filled with such resolve that he will humble himself before anyone to accomplish his ultimate goal.

One of the most absorbing aspects of the film is the depiction of post-war Tokyo, emerging from the ashes of war, “cheery, thrilling, chaotic, Western-influenced, vulgar” (Galbraith 160). This is contrasted with the extreme inaction of the bureaucrat’s hidebound office, dusty and paralyzed with rules and regulations. In 1954, Ikiru won the Silver Bear at the Berlin Film Festival, and would eventually play in the US in 1956. Although perhaps one of Kurosawa’s lesser known films, it was his personal favorite, along with Seven Samurai. 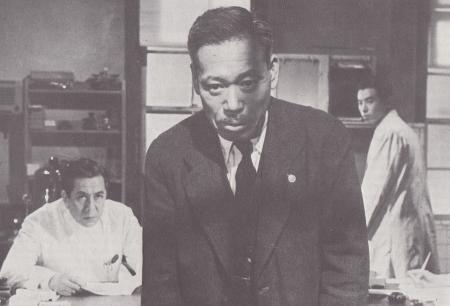