Uptight dentist Sheldon Kornpett’s daughter is getting married and he finally meets the groom’s father…is he CIA…or just flat out insane?  Arkin and Falk are a faultless comedy duo embarking on a questionable secret mission.  Even the New York Times reviewer admitted she laughed until she cried.   “Fueled by elaborate stunt work and the laconic, naturalistic charms of its two stars, The In-Laws deserves its status as a madcap classic” (Criterion Collection).

The In-Laws path to the screen began because Columbia pictures wanted to remake a buddy cop movie with Alan Arkin and James Caan called Freebie and the Bean, from 1974.  Arkin and Peter Falk met, although Arkin was unenthusiastic about remaking his earlier film.  Arkin thought they would make a good team, though, and also thought they should make a buddy film about two people meeting for the first time.  Arkin discussed a story line with Andrew Bergman, who had collaborated with Mel Brooks on Blazing Saddles; the script would be his first solo credit. In many ways Arkin is Falk’s straight man, you would think he would have wanted the more flamboyant part. But, his reactions to Falk’s craziness are among the most delightful aspects of the film.  There was a lot of improvising during the shoot, contributing to the feeling of everything spiraling out of control.

Arkin, who also executive produced, suggested Arthur Hiller as a director, they had worked together ten years earlier, on Popi.  Hiller thought the script was brilliant, with an expansion of ideas as it went on that was unusual for a comedy.  “You had a director who understood the script completely, played with it magnificently, you had a director who worked beautifully with actors, who gives actors an enormous amount of freedom, you had two actors who had chemistry together from the beginning very effortlessly and easily, so what can go wrong?” (Criterion Alan Arkin Remembers).  Hiller could ground all the craziness in reality, because he was not really a comedy director.  The audience has to believe it all could really happen. 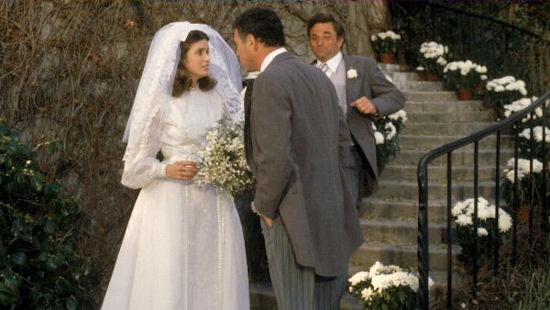 “I had the good fortune to work with Arthur Hiller on what became two of my favorite films. He was a fine, easygoing director and a gentle, warm, kind human being. There was nothing of the authoritarian figure about him. He created an easy, almost effortless collaborative atmosphere on the set, where one always felt cared for, comfortable, and filled with joy” (Criterion Alan Arkin Remembers).

“I always thought my tombstone would read ‘Arthur (Love Story) Hiller,’ but I get more comments on The In-Laws than any other film I directed. People say they’ve seen it twenty-six times, or that every time the family gets upset they put on The In-Laws. I hear it over and over from so many people. It was Marlon Brando’s favorite comedy! I thought we made a first-rate film, and I just loved it, but I didn’t expect the level of love that hundreds and hundreds have told or written me about (Criterion Arthur Hiller on directing). 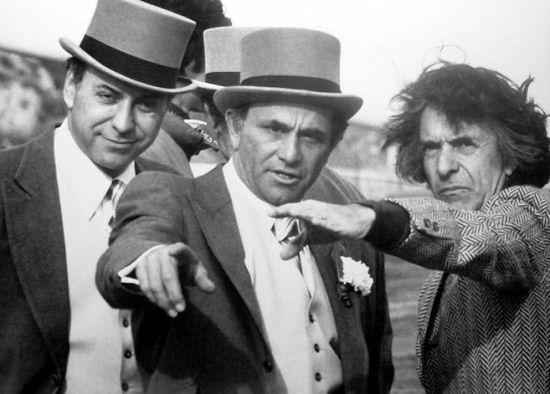 Arkin, was a stage actor until his first movie role as the exasperated Lt. Rozanov, in The Russians Are Coming, The Russians Are Coming.  Arkin had wanted to be an actor—a character actor—since he was five years old.  Unable to make a living in New York, in desperation he took his wife and young child to Chicago and joined what became the original Second City troupe.  He found his niche as a quick-witted improvisor, often with various accents.  Russians director Norman Jewison had seen him on Broadway in a play (Second City, then as now, jolted careers) and wanted him for the part.  Because he was an unknown, the producer balked, but Jewison auditioned him with an improvisation where a Russian spy tries to convince his interrogators that he is really with the Bolshoi Ballet.  Arkin won a Golden Globe for Lt. Rozanov, and was nominated for an Oscar.  This began a very hot part of his career, where he terrorized Audrey Hepburn in Wait Until Dark, was the lonely deaf mute in The Heart is a Lonely Hunter, and played Capt. Yossarian in Catch 22.  He was Oscar nominated four times, for Russians, Hunter and Argo; he won in 2007 for Little Miss Sunshine. 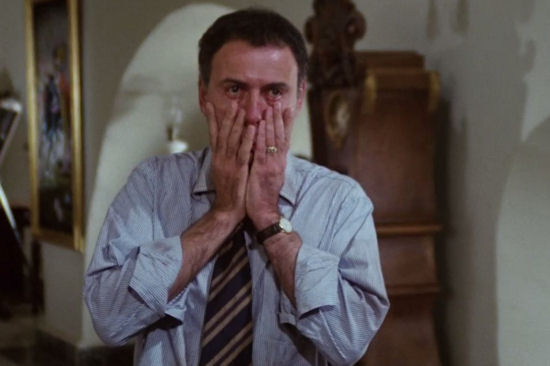 Peter Falk was born in New York City.  When he was three years old, his right eye was surgically removed because of cancer, he wore a glass eye all his life.  He couldn’t join the Army, but the Merchant Marine accepted him towards the end of WW II.  He eventually got a Master’s Degree in Public Administration, and worked at the Connecticut State Budget Bureau while taking acting classes at night.  He quit at 28 and moved to Greenwich Village to become an actor.  He made his Broadway debut in 1956, but was discouraged from pursuing film work because of his appearance, Harry Cohen of Columbia Pictures said, “For the same price, I can get an actor with two eyes” (Wikipedia).  His breakthrough part was as a killer in Murder, Inc, for which he was Oscar nominated, as he was the following year for Pocketful of Miracles.  He wore the same distinctive overcoat in both films. His love of the character defining coat foreshadows the rumpled raincoat that would bring him fame as Columbo later in his career. In the 1970s, he collaborated with his friend John Cassavetes on several celebrated independent films.  For many people his most notable film role was as the Grandfather reading the story of The Princess Bride, but for others, his career high point is his role as “just one more thing” detective Columbo, which made him a tv icon and won him five Emmys. 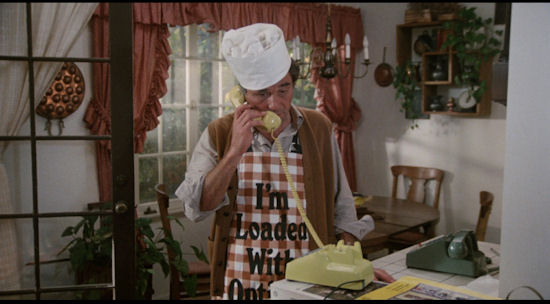 Writer Andrew Bergman co-wrote Blazing Saddles, as well as Soapdish, Honeymoon in Vegas and Fletch.  “Warner Bros. said to me, Alan Arkin and Peter Falk want to do a movie together. And I thought immediately, ‘Didn’t they do a movie?’ It’s like, they seemed so perfect for each other! Their personalities, you have a rabbit and a tortoise. You get a hysteric, a person who seems to have no feelings whatsoever…and I hate constructing plots, hate it more than anything, but I love constructing characters, and this was the perfect thing where the characters were the plot. Whatever Peter said to Alan, that was the plot. For me, it was a dream. It was perfect. Since my stories are always about people getting in way over their heads, which is what Honeymoon is, this movie was the perfect type for me. You have a dentist who winds up in front of a Colombian firing squad. How much more ridiculous can you get? I love stories about people in over their heads” (EW).

One of the film’s greatest fans was Marlon Brando, who said he’d seen it at least 20 times (SFGate).  And, certainly the film’s legacy is “Serpentine” which Peter Falk said people never stopped yelling at him in the street, as a sign of comradery and approval.  Arthur Hiller, talking to Criterion about directing the film, agreed, “Yes, Andy wrote a funny concept. And yes, I set it up well. But it’s the skill of the actors that makes it so real and hilarious at the same time. They were so wonderful that I added another moment of serpentining before they got to the car. Most times when people are gushing to me about The In-Laws, the first thing they say is “Serpentine! Serpentine!”

Although the costumes in this film are not particularly distinctive, I was amused, when arranging the slide show, that Arkin and Falk both wear striped ties, but the stripes are in opposition to each other, one slants right and one slants left, clearly no accident. 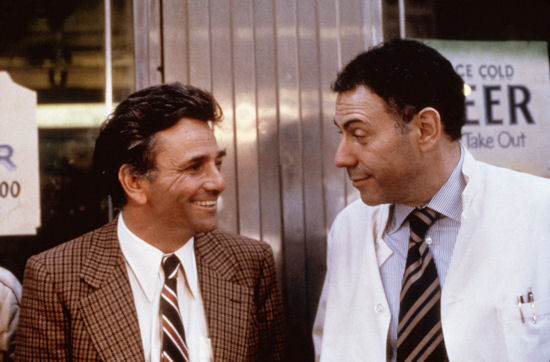 Arkin recalled how he was perplexed by how much fun he was having on the shoot.  “For the first weeks of shooting, I tried to jam myself into my old familiar work place.  I tried to suffer, to constrict myself; I couldn’t make it happen.  I kept looking at the director, Arthur Hiller, to see if he was disapproving, to see if he knew the terrible fact that I was having fun and not working.  I looked at Peter Falk, my co-star, to see if he was hating me for enjoying myself; no one said anything.  In fact, people seemed to like it.  I even think my having fun allowed Peter to do the same.  I’m not sure that it’s a place he’s frequented too often in his career.  He’s a terrific actor, but I don’t think fun is a word that he would apply to his work process” (Arkin 87-88).  Over the years, he said that hundreds of people have asked him if they were having fun, and he admits to his fans that they were.  He didn’t know why audiences should care, until he realized that it makes us all participants in “something grand and joyous and unifying…to know that an actor had fun making a movie” (Arkin 93).

“One of Arkin’s great gifts is the ability to convincingly play an average person. As Sheldon, he is not just a dentist; he is quite likely your dentist. The comedy comes from his increasing terror as Vince drags him into greater and greater danger. Quite simply, nobody alive does these kinds of scenes like Arkin… We share the question in Sheldon’s mind: What would be more frightening—if everything Vince said were a delusion, or if everything he said were true?” (Criterion Serpentine)

The two actors were not close, since Arkin lived in upstate New York and Falk in LA.  But, after the much panned 2003 remake of The In-Laws with Albert Brooks and Michael Douglas came out, Arkin called Falk to congratulate him, “And you and I–we got raves—better reviews for the remake than for the original” (Falk 255). 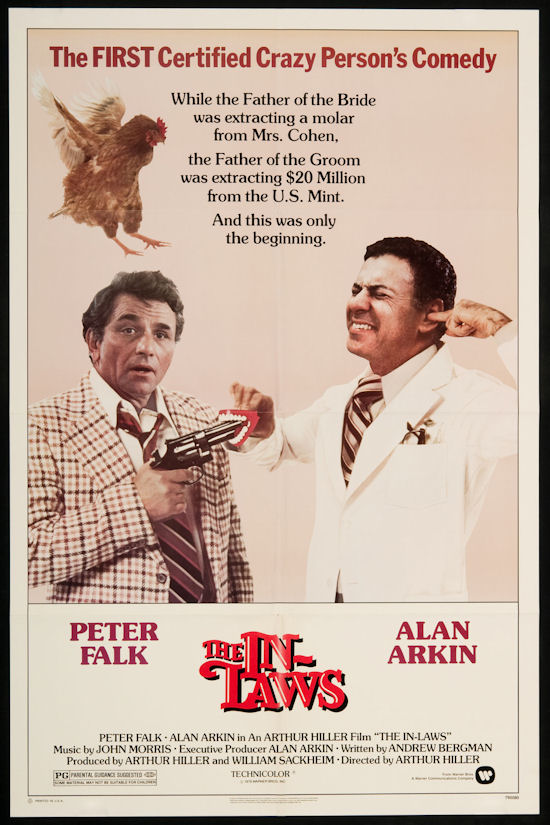