“I was born when she kissed me. I died when she left me. I lived a few weeks while she loved me.” Volatile screenwriter Dixon Steele is suspected of a hatcheck girl’s murder but is alibied by a sultry neighbor. Bogart gave one of his sharpest performances as a self-destructive denizen of Hollywood’s shadows in this moody film noir. Directed by Nicholas Ray, who would soon immortalize James Dean as the Rebel Without a Cause.

Humphrey Bogart’s independent company, Santana (named after his adored 55-ft yacht) produced In a Lonely Place. The source novel, written by Dorothy B. Hughes in 1947, would certainly seem to be an unlikely star vehicle, since it was written from the point of view of a brutal serial killer. The final script, written by Andrew Solt and rewritten by Nicholas Ray, turned out to be radically different. But, Bogart was rebelling against expectations, having had little influence over his scripts in the 15 years he had been a Warner Brothers contract player. And, unlike today, an actor at 50 was considered to be hopelessly old. “Bogart was a pioneer of movie star maturation, and it was not a comfortable position to be in.” (Robert Sklar).

Many Bogart biographies say the character of screenwriter Dixon Steele was the closest Bogart ever played to his own personality, especially as he was during his fractious marriage to Mayo Methot, when they were known as the Battling Bogarts. The fiercely opinionated Louise Brooks wrote in her essay “Humphrey and Bogie”: “he played one fascinatingly complex character, craftily directed by Nicholas Ray, in a film whose title perfectly defined Bogart’s own isolation among people. That film was In a Lonely Place. It gave him a role that he could play with complexity, because the film character’s pride in his art, his selfishness, drunkeness, lack of energy stabbed with lightening strokes of violence were shared by the real Bogart.” The script incorporated such real-life traits as his fondness for ham and eggs, and a cameo appearance by Mike Romanoff, owner of a restaurant where Bogart was a regular.

The film is also a reflection of Hollywood’s (justified) paranoia over the House on UnAmerican Activities Committee anti-Communist witch hunt. . Bogart was a Roosevelt liberal and he had been accused of being a Communist (along with James Cagney, Frederic March and others) by the Dies Committee in 1940. Bogart protested the blacklisting that was shuddering through the film capital, and had recently traveled to Washington with a group of high profile Hollywood activists to oppose the HUAC hearings. The suspicions that dog Dixon Steele through the murder investigation and taint his budding romance reflect Bogart’s personal concerns as well as the national zeitgeist.

Warner Brothers allowed Bogart one independent production a year outside his contract. This film would be directed, as was the first Santana production, by Nicholas Ray. His first two films were still unreleased when Bogart hired him to direct Knock on Any Door (1949), a tale of juvenile delinquency immortalized by pretty-boy thug John Derek’s wish to “Live fast, die young and leave a good-looking corpse.”

Laurel Grey is played by Gloria Grahame, whose marriage to Ray (another iconoclastic drinker) disintegrated during filming. The part seems clearly intended for Lauren Bacall, but Warners petulantly refused to lend her to Bogart’s Santana Productions. Ray once said in an interview that Ginger Rogers was the first choice for Laurel, according to Vincent Curcio’s (error-prone) biography of Gloria Grahame, Suicide Blonde. Producer Robert Lord was so nervous about hiring both husband and wife that he had Grahame sign some rather unusual clauses in her contract, acknowledging “that in every conceivable situation his (Ray’s) will and judgement shall be considered superior to mine and shall prevail.” She was also forbidden to “nag, cajole, tease or in any other feminine fashion seek to distract or influence him.” Although Ray’s rewriting and direction reflected the heat of their crumbling relationship, their professional deportment was exemplary. Ray’s copy of the script was full of instructions for Grahame, to sharpen Laurel’s anguished conflict of love and doubt. 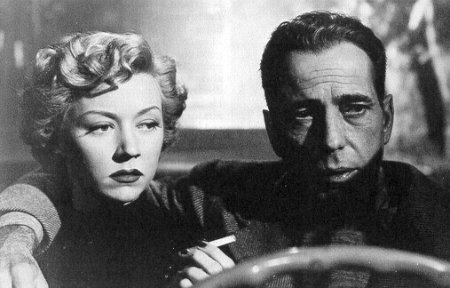 Laurel and Dix’s affair echoes the dilemma of many couples hastily married in wartime, soon to realize they barely knew their spouses. Gothic novels and films like Daphne du Maurier’s Rebecca, where the heroine slowly discovers her lover’s sinister past, were popular in this era. Dana B. Polan notes in his BFI monograph on In a Lonely Place that the media in the late 40s devoted a lot of space to the WWII veteran’s traumatic return, and his importation of combat’s violent hangover into the home. Bogart’s savage temper in In a Lonely Place is so terrifying as to go beyond “anti-hero.”

The shadowy film noir universe brims with murderers, losers and loners, although the crime investigation here seems an afterthought. “By the end of the 1940s” wrote Polen, “it was getting harder for Hollywood to sustain many of its driving myths. One of the most important of these myths had to do with the supposedly redemptive qualities of love and romance.” The ending is unusually ambiguous for a Hollywood film of the time. Ray explained, “you do not know whether the man is going to go out, get drunk, have an accident in his car, or whether he is going to go to a psychiatrist for help. And that’s the way it should be.” Robert Sklar notes the way the film explicitly links eroticism and violence and adds, “In a Lonely Place is a radical demystification of the classic Bogart hero. The role of Dix Steele is among the most interesting examples of a performer’s critical reevaluation of his screen persona, and surely belongs on the list of Bogart’s great performances.”

(Photo from The Great Movie Stars, The Golden Years, by David Shipman (1970). Sources include the two excellent, recent biographies Bogart by A.M. Sperber and Eric Lax and Bogart: A Life in Hollywood by Jeffrey Meyers. I prefer the latter because it concentrates more on the work and less on the personal. Also, Suicide Blonde, the Life of Gloria Grahame by Vincent Curcio, City Boys by Robert Sklar and In a Lonely Place, the British Film Institute monograph by Dana B. Polan. The Louise Brooks essay is in Lulu in Hollywood. If only The Ultimate Bogart by Ernest W. Cunningham was as useful as The Complete Hitchcock by Paul Condon and Jim Sangster).