A shabby Hong Kong apartment building harbors the forbidden passions of two outwardly mild neighbors who realize their spouses are having an affair. Sumptuous cinematography and Cheung’s luscious wardrobe dominate this modern Asian cinema classic “This may be one of the swooniest movies ever made about love, and it luxuriates in its tailspin” (Elvis Mitchell).

Cinema from all over Asia is becoming easier to see in the US, and it is due in no small part to the popular films of Wong Kar-Wai. Martial arts (wuxia, or sword and chivalry) films may have been the gateway into an American market, but Chinese films, like those from any other country, encompass a variety of genres. Few are more popular than romantic melodrama.

In the Mood for Love takes place in Hong Kong in 1962, 13 years after Mao’s rise to power on mainland China drove refugees, particularly from Shanghai, to the British Crown Colony of Hong Kong. There, as so many immigrants do, they settled into tight knit enclaves, where they preserved their own language (Mandarin) and culture, limiting their interactions with the Cantonese majority.

This was Wong’s childhood. He was five years old when he moved with his family to Hong Kong, in 1963, the time frame of the film. He wanted a nostalgic return to his youth, the enticing blend of East and West, his mother’s favorite singer, Nat King Cole (and the Spanish music, brought by an influx of Filipino musicians) and the elegant Chinese dresses, cheongsam in Cantonese and qipao in Mandarin.

Maggie Cheung had a wardrobe of over twenty dresses for the film. Cheongsams, which were a hybrid form of Western and Chinese dress that became popular in the 1930s are extremely confining, and these even more so, with their exaggeratedly high collars. Small stylistic details denote the passing of time. “We didn’t have to do research, because our mothers dressed like this,” Wong explained. Cheung is heart-stoppingly beautiful in this film, thanks 4 hours of daily wardrobe preparation.

The apartment is a built set, but the exteriors were shot in Bangkok, Thailand, which resembles Hong Kong in this era. Tony Leung won the Best Actor Award at Cannes, and the film won a Grand Prix du Technique, for its cinematography and production design.

The conclusion of the film is intentionally equivocal. Interestingly, after the screening at the North Carolina Museum of Art, a number of us discussing the film agreed that we could not understand the confusion of those who couldn’t tell whether the protagonists did or did not consummate their affair, and discovered that we had arrived firmly at two opposite conclusions! 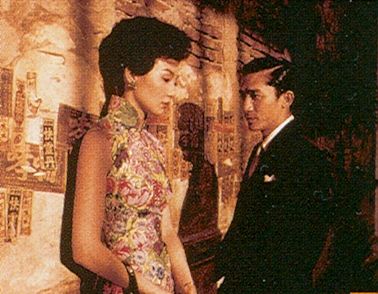 (Sources for this brief essay are all courtesy of the excellent Senses of Cinema website.)