Under relentless sheets of cold rain, a former barmaid offers sanctuary to her fugitive ex-lover. The intertwined destines of a neighborhood of London’s East Enders add to the suspense, prefiguring the ensemble work of Robert Altman. A rare film from this era set in a Jewish milieu, perhaps because producer Michael Balcon (Daniel Day Lewis’ grandfather) and co-writer Henry Cornelius were themselves Jewish. A recently rediscovered classic of British cinema by the director of Kind Hearts and Coronets, “Sunday delivers an existential wallop for the ages”—New York Sun

The film is set in Bethnal Green, a London neighborhood. By the end of the 19th century, the large houses and gardens had beome a tumbledown slum, in its fringes prowled the notorius Jack the Ripper. The neighborhood was brutalized during the WW II blitz, where 80 tons of explosives fell, destroying thousands of houses and killing 555 people. It was also the site of the larges civilian disaster of the war, when a woman slipped on the steps of a tube station being used as an air raid shelter, and 173 died in the resulting crush. As recently as last year, unexploded ordinance was still being unearthed. Location filming showed the devastation of the war, before reconstruction and gentrification changed the landscape. The films shows the stuggles of a neighborhood emerging from devastation, although one critic tut-tutted, “It is, perhaps, a pity that thousands of honest, cheerful citizens of Bethnal Green could not have had stronger representation,” but the film was Ealing’s biggest hit of the year (Drazin 77).

Robert Hamer was described, even by one of his admirers, as one of British cinema’s biggest drunks; “his story is a very British one of a film maker denied the opportunity to express himself” (Drazin 71) He won a scholarship to Cambridge, but his grades began to slip in math and economics, as he concentrated on writing poetry and songs for revues. He was kicked out before graduation in a homosexual scandal, establishing a distrust of love, and a belief that all romance ended in betrayal. His conservative family must have been even more distraught when he started at the very bottom of the pecking order at a film studio, chalking numbers on the slate marking the scenes. Eventually, he was promoted to editing, where he cut Hitchcock’s last British film, Jamaica Inn, among others.

His first directing assignment was one of the episodes in the portmanteau horror film, Dead of Night, which starred Googie Withers, one of his favorite actresses. He also worked several times with Alec Guiness, most notably in Kind Hearts and Coronets, in which conniving Dennis Price murders all the relatives standing between him and a fortune, all eight played by Guiness. Hamer was a life-long alcoholic, who repressed his homosexuality after his university scandal, he died after declining health at the age of 52 in 1963. For all his display of cyncism, both Googie Withers, and Alec Guiness, both of whom worked with him on several occasions, said he had a great sense of fun, and that he was an enjoyable colleague.

Producer Michael Balcom is considered to be the most important and influential producer in British film history. A child of poor Eastern European Jewish immigrants, he had to leave school for work, in spite of winning scholarships. With his friend Victor Saville, he created Gainsborough Pictures, which gave Alfred Hitchcock his first directing job in the 1920s, and produced some of his most famous 1930s thrillers, including The 39 Steps. He also financed Robert Flaherty’s documentary Man of Aran, while personally intervening to help actor Conrad Veidt escape from Nazi Germany.(Veidt, who you will see in March in The Man Who Laughs, is most famous in this country for playing the Nazi officer Major Strasser in Casablanca. He was not Jewish, but always wrote “Jewish” when asked to identify his religion, as a protest against the Nazis’ discrimination and so had to flee). In 1938 Balcom founded Ealing Pictures, the most famous of all British studios, and was knighted in 1948. His daughter, Jill, married British poet Laureate Cecil Day Lewis, their son is Oscar winning actor Daniel Day Lewis.

Googie Withers was born in what is now Karachi, Pakistan in 1917, but as was common for British citizens during the Raj, was sent back to England for boarding school when she was 7 years old. Googie was either a mispronunciation of her real name, Georgette, or a pet name her Indian nurse gave her. She became a dancer, and then a film extra, she has a small part in Hitchcock’s The Lady Vanishes. Her first important role was as a Resistance fighter in One of Our Aircraft is Missing in 1942. One of her most famous roles was in another film noir with Richard Widmark, Night in the City, a film blacklisted American director Jules Dassin filmed in London. In 1958, she moved with her husband, John McCallum to Australia, where they had three children, and live to this day, having recently celebrated their 60th wedding anniversary.

John McCallum was born in Brisbane, Australia, attended the Royal Academy of Dramatic Art and played in the Old Vic and Stratford Upon Avon. He was a popular actor in British films, and met his wife in 1947 in The Loves of Joanna Godden. In Australia the McCallums acted on stage together, and McCallum wrote directed and produced plays in the theater.

It Always Rains on Sunday was based on a novel by Arthur la Bern, where “the character’s lot is to deceive and be deceived. Passion is stronger than virtue. The desire for money, or freedom, or love leads the characters to disregard any standard of honor or trust” (Drazin 77). Hamer was clearly inspired by a love for the Poetic Realism style of pre-War French filmmaking, with hints of Le Jour se Leve and Quai des Brumes. This film also references the symbolism already common in Hollywood films of the era, the use of mirrors to represent duality, and the railroad tracks as a sign of the implacable fate from which there is no escape. There is an interesting use of claustrophobia, as well, in the insularity of the neighborhood, but also the domestic confinement of the heroine, whose life is trapped within the four walls of her house and the stifling sameness of her domestic routine.

Ealing Studios was home to a darkly comic style of comedy epitomized by Kind Hearts and Coronets, The Lavender Hill Mob and The Ladykillers. The technical crew on this film was outstanding. Cinematographer Douglas Slocombe was Ealing’s top cinematographer, eventually shooting all three Indiana Jones movies famously without ever using a light meter; composer Georges Auric scored all of Jean Cocteau’s films, like Beauty and the Beast, as well as William Wyler’s Roman Holiday, and Jules Dassin’s Rififi, among many others.

The constant downpour and shadowy cinematography makes, for some, the definitive British film noir, admirably accomplishing Hamer’s goal, “I want to make films about people in dark rooms doing beastly things to each other” (Drazin 71) 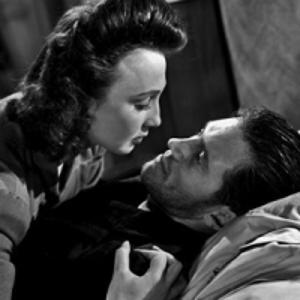