Two inseparable artist friends adore Catherine, an elusive free spirit who refuses to choose between them. Set just before and after WWI, Truffaut’s passionate understanding of life and love created this defining film of the French New Wave. “Ranks among the great lyric achievements of the screen”–Pauline Kael.

Rebellious, the unwanted child of an unwed mother, nothing was more important to François Truffaut than the movies. He repeatedly sneaked out of his bed to smuggle himself into film screenings, and the feelings of forbidden pleasure only heightened his passion. Young Truffaut (and his files filled with film notes) were barely tolerated in his own home. As a teen, Truffaut saw three films a day and read three books a week. Cahiers du Cinema editor and critic Andre Bazin became his refuge; mentor, friend and surrogate father, encouraging his questing mind and acid pen. Truffaut moved in with Bazin and his wife and sincerely felt the movies had saved his sanity. He was one of many young writers who were hopeful that after the WW II German Occupation ended, and French film making was reborn, the craft would reflect the innovations and freshness they detected in post war Hollywood cinema. The return to a subdued, classic method of story telling frustrated them. He was denied press credentials for the 1958 Cannes Film Festival due to his arrogant disdain for the polite style of “quality” French films and his lionization of American movies and directors. But, the following year, the exorcism of his difficult youth, The 400 Blows won the Cannes Film Festival Director’s Prize. “A fearful polemicist and ferocious critic who had an ability to single out the defects in a film and the sworn enemy of academic French cinema, it was assumed that his first film would be met with fists, guns, tanks and canons. Instead, it was greeted with flowers and an ovation.” (Douchet).

After the success of The 400 Blows, he made the less popular Shoot the Piano Player, and his continuing career as a director depended on his proving he was not a one hit wonder. He felt it was the right moment to begin a much treasured project, based on Jules and Jim. He adored the novel-memoir by Henri-Pierre Roché (he was enamored from the very first line) and sought out the 76 year old author. Roché had traveled in Parisian artistic circles, befriending many of the Cubist and Surrealist painters; it was he who introduced Picasso to Gertrude Stein.

When still a film critic, Truffaut wanted to direct a film based this book, starring his new friend, Jeanne Moreau. In 1957, he had written a valentine to Jeanne Moreau, calling her “the greatest sweetheart in French cinema…With trembling lips, wild hair, she ignores what others call ‘morals’ and lives by and for love. Messieurs, producers and directors, give her a real part, and we will have a great film.” He met her at the Cannes screening of Elevator to the Gallows and immediately gave her a copy of Jules and Jim to read. As a movie lover enthralled by cinema’s beautiful women, he was amazed to have such a woman as a friend, since she embodied both professional success and cinematic mystery.

Jeanne Moreau was a classically trained stage actress, who began playing small parts in films, as in Jacques Becker’s Touchez Pas au Grisbi. The directors of the New Wave brought her lasting fame, especially Louis Malle, in Elevator to the Gallows and The Lovers. Her mature sensuality attracted an astonishing collection of directors, including Welles, Renoir, Bunuel, Antonioni, Kazan, Chabrol, Fassbinder and of course Truffaut. Truffaut wanted to offer his new friend a wonderful part. She had been a little frustrated in her roles lately, particularly disliking Antonioni’s La Notte, in which she never smiled. “Moreau would portray Truffaut’s vision of the supreme woman, fragile and fatale, intelligent and lively, funny and tragic, free and haughty, a woman who followed the impulses of desire to the very end.” (deB&T).

Truffaut began reworking the Jules and Jim script he had shown to Roché three years before, adding material from the diaries Roché kept for nearly 60 years, about the love triangle between himself and Helen and Franz Hessel. Truffaut wanted the film to be “a hymn to life and death, a demonstration through joy and sadness of the impossibility of any love combination, apart from the couple.” (deB&T). 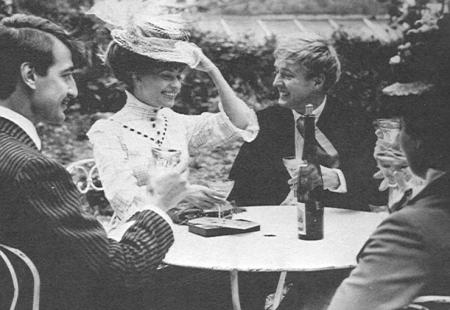 Henri Serre was an unknown actor performing comedy in a club when he was cast as Jim. Jules was played by a well-known German stage actor, Oskar Werner. Much acclaimed for his Hamlet, he’d only had small film roles at that time. Truffaut wanted an actor who spoke French slowly, with an accent, as part of the character.

The film was made quickly and inexpensively, with a crew of only about 15. The filming was intense, not just because Truffaut was in love with Moreau, but she was in love with the part of Catherine. Over the course of the film, Truffaut’s passion for her evolved into a lifelong, adoring friendship. The friendships, the romance, the ease and humor were some of the happiest moments of Truffaut’s life.

The original cut was about an hour longer than the finished film, and editing had to be done carefully, for this was a very shocking subject in the early 1960s. Truffaut loved Georges Delerue’s score, and the musical moments were important to him. When Moreau sings, “Le Tourbillon de la Vie” she makes a gesture because she has switched two verses, but doesn’t interrupt the take. That is the one that was used because of its spontaneous charm. While he was editing, Truffaut imagined that he, like the author was looking back at the end of his life. Only 30, his fear of death seemed premature, but perhaps not so for a great artist who would die so young. 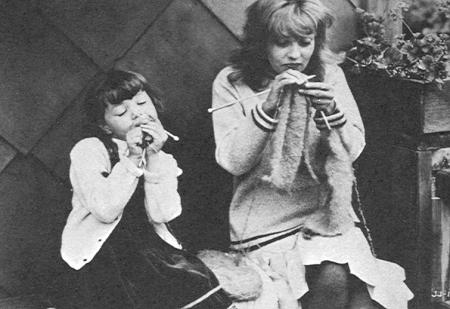 Moreau’s portrayal of Catherine, filmed with an exuberant hand held camera, dominates the film. Catherine was considered to be a model of new Feminist behavior (as the days of free love loomed) perhaps glossing over the feelings of doubt and anxiety the ménage a trois provoked. The film is so alive, and the characters passions so fully formed, that we believe in all their pleasure and pain.

Truffaut was gratified by the enthusiasm with which the film was received, especially by the admiration of director Jean Renoir. He carried the letter Renoir wrote to him in the inside pocket of his jacket for many years. It read in part, “It is very important for us men to know where we stand with women, and equally important for women to know where they stand with men. You help dissipate the fog that envelops the essence of this question. For this, and for many other reasons, I thank you with all my heart.” (deB&T).

Roché’s widow expressed her admiration, and assurance that her late husband would have happy with the film. But, the most unexpected response arrived, “I am, at 75, what is left of Kathe, the awesome heroine of Pierre Roché’s novel, Jules and Jim…” the writer had approached the film with trepidation, but found it “miraculous”…”what affinity could enlighten you to the point of making the essence of our intimate emotions perceptible? As far as this goes, I’m your only authentic judge, since the other two witnesses, Pierre and Franz are no longer here to express their ‘yes’to you. Affectionately yours, dear M. Truffaut,” this was signed by Helen Hessel, the real Catherine. (deB&T).

Jules and Jim was one of the earliest films distributed in the US by two Harvard students who ran a film society, Cyrus Harvey and Brian Halliday, under the imprint Janus Films. Janus went on to distribute the so-called “art house canon” and is now owned by Criterion/Janus who are making not only impeccable DVD releases, but new prints of many of their landmark films. They’ve just been showing at the 2006 New York Film Festival, and some of these new prints will have a theatrical run. If French films have a special place in American cinemas, it may be in part because of all the moviegoers who fell in love with Jules and Jim in their own youth. 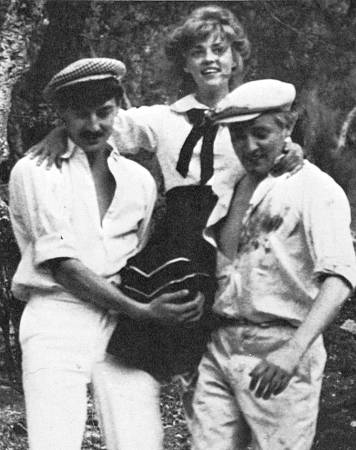 Because of Truffaut’s passionate love for cinema, and his balancing of commercial success and more formal concerns, he remains the most beloved and accessible New Wave director. Jules and Jim is also “the moment when old-fashioned narrative bent to modernist storytelling” as Paul Schraeder remarks in the Film Comment article, “Canon Fodder.” One reason is because Truffaut never became cynical about the movies. “Sometimes I saw the same film four or five times within a month and could still not recount the story line correctly because, at one moment or another, the swelling of the music, a chase through the night, the actress’s tears, would intoxicate me, make me lose track of what was going on, carry me away from the rest of the movie.” (Lanzoni).

“Each time Jules and Jim begins, we marvel again at its ability to carry us off into memories of our own youthful, enthusiastic passions. Each time we see it end, we grieve, not just for the friends lost on screen or for the lost joys of their youth, but for our own knowledge that joys—whether friendship, love, cinema, or life—are bound to end (Wilheim). 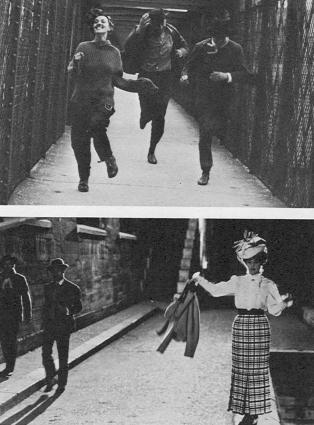