“Let me tell you about Florida politicians. I make them, I make them out of whole cloth, just like a tailor makes a suit. I get their name in the newspaper. I get them some publicity and I get their name on the ballot. Then, after the election, we count the votes, and if they don’t turn out right, we recount them again until they do”–Edward G. Robinson to Humphrey Bogart in Key Largo

The gathering force of a hurricane like the one that really did devastate the Florida Keys in the 1930s is a backdrop to the perspiring passions of murderers, molls and Bogart and Bacall. Suffering from post-WWII malaise, Bogart journeys to visit his buddy’s widow. He finds her in a backwater hotel in Key Largo occupied by an invading army of gangsters. Brutal Johnny Rocco isn’t afraid of any man, but God’s fury is different matter.

Hollywood was in turmoil in 1947. The House on Un-American Activities Committee was holding investigations into Communist influences in the film capital. John Huston, Humphrey Bogart and Lauren Bacall were high profile members of an opposing group, the Committee for the Defense of the First Amendment. Bogart and Bacall had just flown to Washington with other prominent movie folk to give moral support to Eric Johnson, a spokesman for the Producers’ Association, who was going to affirm that Hollywood would never support a blacklist or government censorship. But they were no match for the maneuverings of skilled House Committee politicians, including Richard Nixon. By the time the CDF returned home, it would appear that they were defending not democracy, but Communism. John Huston said, “Communism was nothing compared to the evil done by the witch hunters. They were the real enemies of this country.” Back on home turf, Huston and Bogart replied forcefully with an allegory of power wielded by fascist gangsters against innocent citizens. 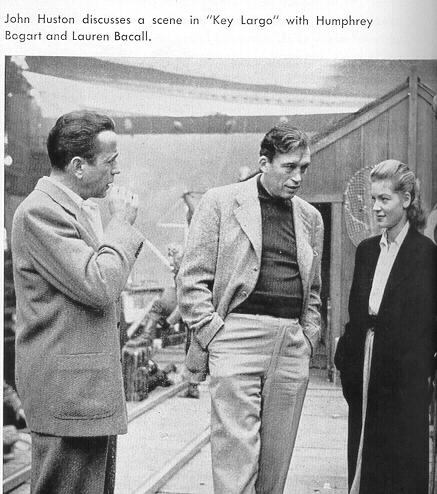 Key Largo was first a play written in blank verse by Maxwell Anderson. On stage, Paul Muni played a veteran of the Spanish Civil War who deserted under fire and redeems himself in death, defending the family of a true war hero. John Huston was in a rage over the HUAC hearings and didn’t want to adapt a play by a reactionary who hated Roosevelt, in poetry, yet. For the proper atmosphere, he and Richard Brooks were hammering out a script in the only hotel in Key Largo, deserted in the off season. Their script was saturated with post-war disillusionment. The criminal boss, Johnny Rocco, was modeled on real-life gangster Lucky Luciano, who had just been deported to Cuba, followed by his loyal mistress, Gaye Orlova. The play’s ending was thrown out and a new one was added from Hemingway’s To Have and Have Not, since Howard Hawks’ film of that name had previously thrown out Hemingway’s ending.

Huston’s last film, The Treasure of the Sierra Madre, had been filmed on location and had gone over budget, so Jack Warner insisted that Key Largo be filmed on the studio sound stage. Cinematographer Karl Freund compensated by using his camera expressively to negate the impression of staginess as much as possible. The cast rehearsed as if for a play, which resulted in an ease with the material, and Bogart and Robinson in particular enjoyed the professional give and take as they created their characters.

This was the fifth film that Robinson and Bogart made together. Robinson said, “When I was the reigning star, Bogie would be slain first, and I’d live out another reel before I got it. As the years passed, and Bogart became the reigning star and I was demoted to character roles, I’d get the bullet first and Bogie would live out another reel.” Bogart may have eclipsed Robinson at the box office, but he insisted that Robinson get star treatment on the set. And Huston devised a fabulous entrance for him, hot and sweaty, smoking a cigar and wallowing in a bathtub, like “like a crustacean with its shell off.” It’s hard to believe that Huston’s first choice for the part of Johnny Rocco was Charles Boyer. 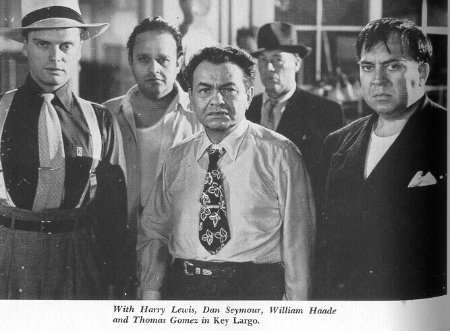 Claire Trevor had made 44 mostly B pictures. She wanted the part of Gaye Dawn, and asked Bogart, her old friend from Dead End, to ask Jack Warner if she could have it. She was nervous about her big scene, particularly the singing and asked constantly for a chance to rehearse it. Huston would say there was “plenty of time”. One day after lunch, he told her to get into her costume, he’d decided to shoot the scene. He stood her in the middle of the room, an off-screen pianist played one note, and he told her “Go.” She was embarrassed, “I was supposed to be embarrassed,” she said. “I thought the day would never end. That was torture. But that’s what got the effect.” After she shot the scene, one of the actors playing Rocco’s henchmen turned to another and whispered, “She’s going to get an Academy Award for this.” And so, she did. 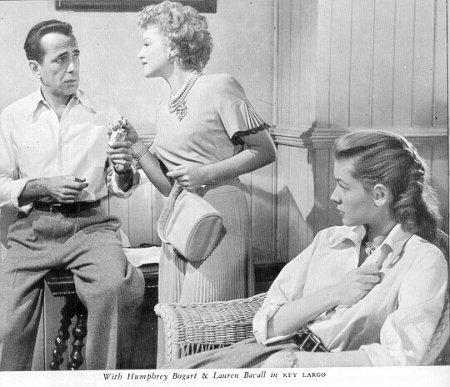 This was the last of the Bogart-Bacall films. Bacall was still unsure of herself as an actress, and this part was considerably drabber than any of the others she’d played thus far. Bogart was an acting mentor to her, but never gave her advice in front of anyone else. He cautioned her against overplaying, which he hated. “The audience is always a little ahead of you. If a guy points a gun at you, the audience knows you’re afraid, you don’t have to make faces.”

Lauren Bacall was still quite a young woman during her “comeback” at the age of 41 on Broadway in Cactus Flower. In an interview she did for McCall’s magazine in 1966 for this occasion she discussed Bogart’s cult status, “Never before in the history of motion picture industry, or in any other part of the theatrical world, for that matter, has anything like this Bogart revival happened. It isn’t just a fad, a whim of the moment. Bogie’s incredible qualities as a man were so strong that they overshadowed all the lousy parts and lousy pictures he played in, and there were certainly too many of those.” 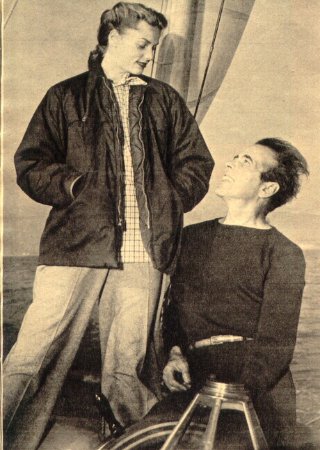 Bogey and Betty in “Key Largo.” He denies calling her “Baby”–a name, it is said, they’ll both be using for someone else soon. NB: This is posed publicity photo, not from the film, and not a candid, since Bogart is wearing his toupee.

Novelist and critic James Agee was a great admirer of director John Huston. He wrote a feature on him for Life magazine in 1950, and later they worked together on The African Queen. In his review of Key Largo, he acknowledged that Huston had made as strong a statement as he dared against the HUAC. “Some of the points Huston wanted most to make were cut out of the picture after he finished it, and I rather doubt whether gangsters can be made to represent all that he meant them to–practically everything that is wrong with post-war America.”  But he was unequivocal in his praise in his Life profile, ” To put it conservatively, there is nobody under fifty at work in movies, here or abroad, who can excel Huston in talent, inventiveness, intransigence, achievement or promise.”  This is a film I can watch over and over again, and I have. 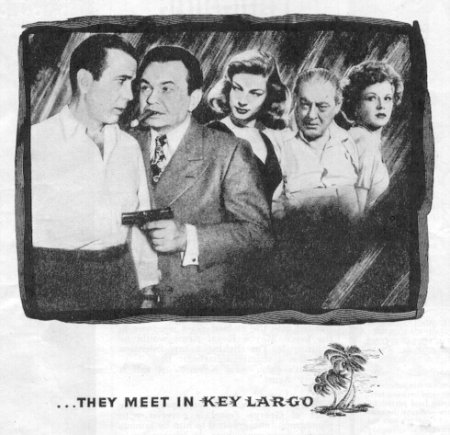 Jammin’ the Blues (1944) Director: Gjon Mili. Lester Young, Red Callender, Harry Edison. (10 min.) Jammin the Blues is a swinging jam session starring jazz legend Lester Young. Director Mili revolutionized action still photography by pioneering the use of Harold Edgerton’s high-speed electronic flashes, notably in a Life magazine cover story on Lindy-hoppers in 1943. His only film includes the title tune, “The Midnight Symphony” and “On the Sunny Side of the Street” sung by Marie Bryant. She also joins Katharine Dunham dancer Archie Savage in a spirited dance break. Integrated bands were still uncommon, so guitarist Barney Kessel, the band’s only white musician, is hidden in the shadows. A fellow musician once said of Young, “Everyone who doesn’t play like Lester is wrong.”

(Photo of Huston, Bogart and Bacall from Agee on Film, v.I, bought off the remainder table at defunct Cincinnati Department store, Mabley and Carew in the early 1970s for $.79. Photo of Robinson and gang from The Cinema of Edward G. Robinson, James Robert. Parrish and Alvin H. Marill, 1973. Photo of Trevor, Bogart and Bacall from Trevor’s Films in Review career article, November, 1963. Ad and seafaring photo from September, 1948, Photoplay.)