Ophuls’ most successful film was his first back in France after an uneasy exile in Hollywood. La Ronde consists of 10 scenes between men and women, and each ends with one partner encountering a new one; a carousel representing the turning circle of desire. To the tune of Oskar Straus’ infectious waltz, Ophuls’ fluid camera threads through an opulent world of cafes, boudoirs, and misty streets in the Vienna of 1900, as each character repeats the same words and gestures with a different partner, deceiving and deceived.

Arthur Schnitzler’s play, Reigen was never intended for public performance. His tale of sexual love and deceit were written for private distribution; he knew that they were too obscene to be staged in turn-of-the-century Vienna. A contemporary of Freud, he suggested that we fall in love not with a person, but with our idea of a person. Onto the face of our partner, we project our own desires. Schnitzler’s dramas depend on the crisis in the life of two people; an inevitable passing from old relationships to new. A romance may last only briefly; the break must come when one of the partners desire it, however faintly. Schnitzler’s world, and director Max Ophuls’ is a man’s world, where love brings women unhappiness in one form or another. But, as Ashley Dukes wrote in an introduction to the play almost 70 years ago: “The misogynist is a lesser enemy of feminism than the philanderer. He is only the mouthpiece of ideas, not the arbiter of fates.”

Max Ophuls was born in Germany, and changed his name to spare his well-to-do Jewish family shame when he became an actor. His acting success was mediocre, but he became a well-known director of plays, and then films. Soon after a film version of Arthur Schnitzler’s Liebelei became a success in Germany, the burning of the Reichstag forced Ophuls into exile in France. He made a number of films there but was forced to flee once again, eventually arriving in Hollywood. There he waited 6 frustrating years to make a film, but then made 4 major films in quick succession; flops at the time, but now highly regarded, including Letter from an Unknown Woman, starring Joan Fontaine and Louis Jourdan. . In 1949, he returned to France, where he had his greatest successes, La Ronde, Le Plasir, The Earrings of Mme. De… and Lola Montes. The last film had an enormous budget and aroused great critical interest, but was butchered in the editing room. It was a commercial failure and Ophuls died shortly afterwards at the age of 55.

The wry Anton Walbrook plays the narrator, Ophuls’ main addition to the play, who serves as the director’s alter-ego and the intermediary between each couple. He repairs the carousel when it breaks down and is seen editing the film when it gets too steamy; a humorous commentary on Ophuls’ problems in the US with the Production Code. La Ronde’s cast consists of the most famous French actors of the day. The female characters have greater access to Walbrook’s ringmaster, perhaps emphasizing their relatively greater self-awareness. But, both men and women are trapped in the merry-go-round of desire, gender roles and social status. The person initiating each sexual encounter will say anything in order to get a lover into bed– beg, flatter, cajole–and afterwards the former object of passion is instantly forgotten. Perhaps, there is even a bit of distaste for one’s weakness in succumbing to such a base desire. This casual interchange of partners was, of course, also a metaphor for the transmission of venereal disease. 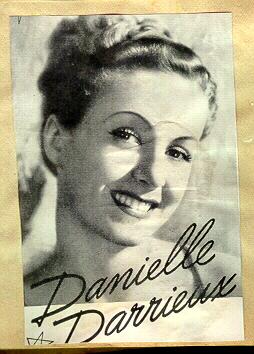 Obsession without love, pleasure without love, love without reciprocation, and lies, lies, lies! The Vienna of 1900 was a reality for the Arthur Schnitzler, but for Ophuls, and for us, this Vienna is dreamlike and unreal. In the play, the Count says to the Actress, “Happiness? There is no such thing, Madame. It’s the very things that people talk about most that don’t exist…for instance, Love. That’s one of them.”