The tale of a simple minded girl’s devotion to her brutish master, a circus strong man, catapulted Fellini to international fame. La Strada won a Best Foreign Film Oscar for this haunting exploration of loyalty, shattered faith and redemption. “An unforgettable experience…a picture to place among the deathless masterpieces” (New York Post). Bring your hankies.

Fellini was born in Rimini, Italy, a resort town on the Adriatic Sea. He was not particularly close to his family, and his father often traveled for business. Rimini was besieged by tourists in the season, and filled with entertainment. His mother said, there was “no hope of getting Federico to school when the circus was in town” (Murray). He may or may not have run away to join the circus—this is one of his most suspect tales—but did make money off his talents as a caricaturist. When Mussolini banned American comic strips, he devised a home grown version of the popular outer space adventures of Flash Gordon. He managed to evade military service for one reason or another and after Liberation made money cartooning the resident American GIs. Cartooning would always be an intrinsic part of his filmmaking process.

He approached the fringes of the cinema world as a gag and rewrite man. He illustrated pieces for a comic paper and wrote radio sketches, including for a show about a young married couple, Cico and Pallina. He fell in love with the voice of his Pallina, Giulietta Massina, she became his wife, muse and star. In 1945, Roberto Rossellini requested that Fellini ask one of his friends to act in a short film he was making about the Occupation, which would become Rossellini’s neo-realist masterpiece, Open City. Fellini contributed to the script, and made his first film as a director, Variety Lights, in 1950.

Fellini’s second film was The White Sheik, a parody of celebrity worship, and his third was I Vitelloni, his first film to garner widespread critical acclaim, as well as international distribution. Fellini was casting around for an idea for his next film after the success of I Vitelloni. Many producers were interested in a sequel, although he was not. He saw a gypsy couple camping in the countryside, the woman stirring a pot of soup, never speaking to her husband. He began to think about how two people who are fated to live together do or do not communicate. Coincidentally, his writing collaborator Tullio Pinelli had recently seen a similar vagabond couple and was thinking along the same lines.

Fellini stressed in many interviews, “La Strada is really the complete catalogue of my entire mythological world, a dangerous representation of my identity undertaken without precautions.” He wrote it specifically for his wife, Giulietta Massina.
“Giulietta is a special case. She is not just the main actress in a number of my films, but their inspiration as well, so in the case of Giulietta’s films, she, herself, is the theme.” (Burke). “I had been thinking of creating a film for her for some time. She seemed to me to be an actress born to express the astonishment, dismay, frenzied gaiety and comical gloom of a clown. There you have it, Giulietta is really an actress-clown, a true female clown. This definition, so illustrious to me, irritates actors who perhaps view it as something reductive, undignified, even coarse. They are incorrect: the clownish artistry of an actor, in my opinion, is his most precious quality, the sign of an aristocratic calling to dramatic art” (Fellini, quoted in Favo and Vigana). 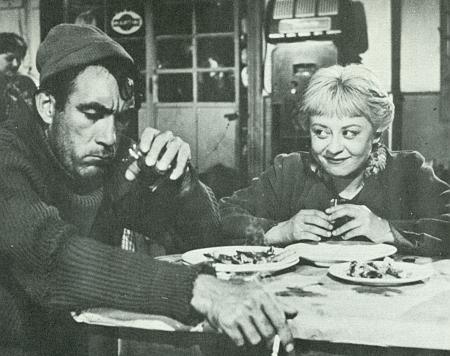 Giulietta, however did not like the shabby clothes Fellini chose for her. “She likes to wear nice clothes, to dress like a lady. I had to persuade her to wear the costume.” According to Anthony Quinn, it was Fellini who coached her in the waifish smiles that would bring her such acclaim. Her heartbreaking performance, sweet but never cloying, gives La Strada its emotional power. 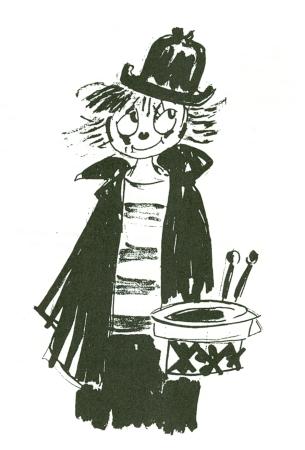 There were lots of American movie stars in Rome in the 1950s and one of them was Anthony Quinn. He was making a series of films, mostly sword and sandal epics, capitalizing on his recent acclaim starring opposite Marlon Brando in Viva Zapata. One of the movies was about a group of prostitutes homeless after the demolition of their brothel. One day, the husband of one of the actresses, Giulietta Masina came to pick her up. He looked at Quinn and said to her, “That’s the one. That’s the face I had in mind for Zampano” and she introduced them. They had no idea who one another were, and Quinn had no intention of starring in a film by a director unknown to him.

Anthony Quinn was born Anthony Rudolph Oaxaca Quinn in Chihuahua, Mexico. His parents met in Pancho Villa’s revolutionary army, his mother was only 17 when he was born. He moved to the LA barrios, and did not speak English until he was 12 years old. But, by 14, the ambitious teen was preaching for Aimee Semple McPherson, and soon would be a sparring partner for Primo Carnera, acting with Mae West, and drinking with John Barrymore and his crowd. He started doing bits in Hollywood movies representing a wide variety of ethnicities. Playing a Cheyenne in The Plainsman, he objected to the direction being offered by Cecil B. De Mille. De Mille was not pleased, but other jobs materialized because the word got around that he had “told off the old man.” He eventually married De Mille’s adopted daughter, Katharine, but his father in law never warmed to him. He continued playing various international villains, like a sheik menacing Bob Hope and Bing Crosby in Road to Morocco.

After being apporached by Fellini, Quinn dined with a Hollywood friend, Ingrid Bergman and her husband, Fellini’s old friend and mentor, Roberto Rossellini. After dinner they insisted on screening I Vitelloni for him. “I was thunderstruck by it,” Quinn said. “I told them the film was a masterpiece, and that the same director was the man who had been chasing me for weeks.” Rossellini, of course, could tell Quinn all about Fellini, and the next day Quinn called the director and told him the deal was on (Alpert). Fellini asked his salary, which was equivalent to the budget of the entire film, so Quinn consented to work for 25% interest in the film. In those days, Italian filmmakers worked on the “French schedule” which meant filming from noon to seven pm without a break. Quinn said he could work on La Strada in the mornings, and then film Atilla (the Hun) for Dino De Laurentiis and Carlo Ponti in the afternoon. Fellini had long been after the two producers to finance his film, they said they were interested only if he would cast Gina Lollabrigida and Burt Lancaster in La Strada. But, they changed their mind, because a financial interest in Fellini’s film would allow them to make sure that Quinn showed up punctually for his Atilla shoot. During the shooting schedule, Quinn got up at 3:30 am driving from Rome out to the countryside, got into costume and make up to be ready for the bleak early morning light, finishing by 10:30 he would race back to the Rome sets of Atilla. “As soon as I started working for Fellini, I realized he was far from crazy, that he was, in fact, the most talented, sensitive and perceptive director I’d ever worked for. He drove me mercilessly, making me do scene after scene over and over again until he got what he wanted. I learned more about film acting in three months with Fellini that I’d learned in all the movies I made before then” (Alpert) 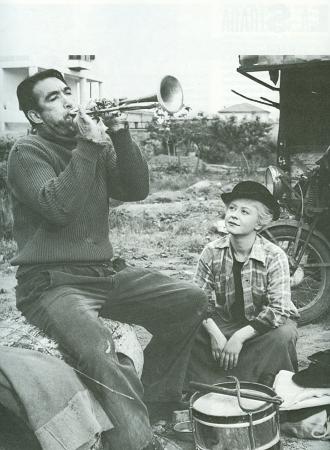 Richard Basehart was involved because he was living in Italy, married to the Italian actress Valentina Cortese. Fellini charmed him into taking the role, in spite of the low salary, and because he too was impressed by I Vitelloni. But, it was also because of Fellini’s outsize personality, “It was his zest for living and his humor,” Basehart said (Alpert).

“The atmosphere on a Fellini set is one closer to that of a carnival or an ocean voyage than an efficient Hollywood operation. Its very lack of what a Hollywood producer would call a rational structure or a detailed schedule of shooting, organize shot by shot from a preestablished and very detailed screenplay is, for Fellini, the guarantee that the process of making a film will always be open to free flights of the imagination.” (Bonadella and Gieri). However, the La Strada shooting script was almost 600 pages, with every moment detailed and illustrated. 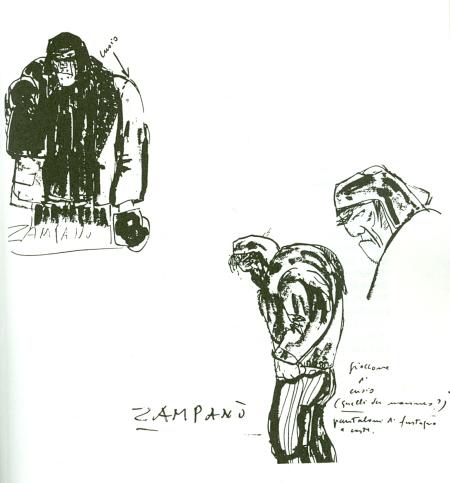 Among the films in competition at the 1954 Venice Film Festival were La Strada, Seven Samurai (Kurosawa) Sansho the Baliff (Mizoguchi) Rear Window (Hitchcock) On the Waterfront (Kazan) and Senso (Visconti), although the Golden Lion went to Renato Castellani’s Romeo and Juliet.

When La Strada opened to world wide acclaim, 50 international cinema prizes, a 3 year run in New York and got de Laurentiis and Ponti a Best Foreign Film Oscar, it made them look like great producers. They swanned around, taking credit for discovering a genius. Their uncensored opinion was, “Fellini? That no-talent. He’s so full of shit, I can’t understand what he is saying” (Quinn).

Giulietta’s character became an icon. “They all wanted Gelsomina” Fellini said. “I could have earned a fortune selling her name to doll manufacturers, to candy firms, even Disney wanted to make an animated cartoon about her. I could have lived on Gelsomina for 20 years.” (Alpert). Everywhere unauthorized dolls, sweets, cigars, restaurants, shops and all kinds of souvenirs were named after Gelsomina and La Strada. Fellini made at least 30 small distributors rich, but not himself. Quinn’s agent saw the film and, horrified, told him to sell off his share for $12,000, missing his chance for a fortune. Fellini said, “I gained nothing or hardly anything from a material point of view. But, I was at peace with myself and my pride as an artist.” (Solmi).

The philosophy of neo-realism could be tyrannical, and Fellini was criticized for abandoning the stylistic purity and Marxist reform philosophies that drove many of the classics of the genre. He objected to the idea that there was only one appropriate subject matter for Italian cinema. Fellini insisting, “There are more Zampanos in the world than bicycle thieves, and the story of man who discovers his neighbor is just as important and as real as the story of a strike.” Although set clearly amidst the poverty of provincial Italy, “we witness an even clearer transition from a neo-realist cinematic world, based upon character types who reflect social or economic conditions, to a more fanciful world of the director’s own invention.” (Bonadella and Gieri).

“ Fellini is a storyteller, a true mythomaniac. If there were no such thing as the cinema, what profession might he have chosen? Tramp? Barker at a country fair? Journalist? Actor? Let us abandon these hypotheses, since, by fortune, the cinema does exist. It was inevitable that a man like Fellini should choose an art form like the cinema, a medium that lets him tell a story as he lives it from day to day, in all the sumptuous disorder of an adventure in perpetual motion”(Salachas). 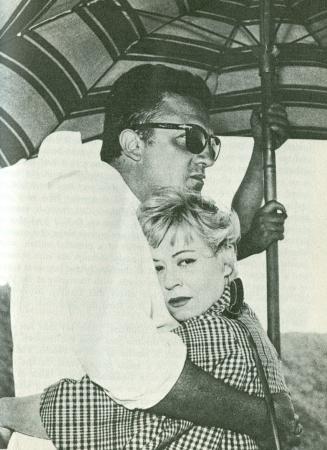