From the unfettered imagination of Jim Henson, an 80s Oz ensnares petulant teen Sarah, who impulsively wishes her wailing baby brother into the clutches of the Goblin King. Bowie, magnificent in a spiky mullet wig, grants her wish and she must brave his M.C. Escher-inspired Labyrinth to recover tiny Toby. Produced by George Lucas, the songs are Bowie’s, and the script is by Monty Python’s Terry Jones. “A real masterpiece of puppetry and special effects, an absolutely gorgeous children’s fantasy movie” (Chicago Tribune)

It’s so great to see you all here, this film sold out faster than any other in history!  So, thanks to the devotion of all the Labyrinthines!  If you saw this film at a certain age, its magical world imprinted itself on your brain.  As someone who came to it later in life, it’s a unique and occasionally disturbing layering of Alice in Wonderland, The Wizard of Oz, and Ziggy Stardust

Fairy tales are often coming of age stories.  Here Jennifer Connolly’s Luke Skywalker-ish whining, meets Jim Henson’s Muppets and David Bowie in alarmingly form fitting tights.  Those of you who know Bruno Bettleheim’s Uses of Enchantment remember that he interpreted the “animal bridegroom” stories like Beauty and the Beast as a method to accustom a young girl to being handed off from the relative safety of her father’s household to the terrifying unknown of her husband’s.  Remember being a “teen-ager” is a post WW II construct.  In fairy tale times, at 12, you were an adult.

I’m sure I don’t need to regale this audience with trivia, like how Ally Sheedy and Jane Krakowski were finalists for Sarah.  I would have loved to see Jane Krakowski in this part, wouldn’t you? George Lucas did uncredited writing and editing, along with the credited screenwriter, Terry Jones of Monty Python.   I always worry that Toby Froud, who plays the baby Toby, would be plagued by unsettling nightmares due to his unremembered hours in the lap of the Goblin King.  But, maybe, the fact that he is now a puppeteer himself says all that you need to know.

One of the charms of the film is director Jim Henson’s tactile effects, one of the last spectacles of the analog age.  Lost at the box office during the summer of Top Gun and Ferris Bueller, Henson was crushed, and he never directed again, although he did live long enough (he died in 1990) to see his pet project assume cult status.  Inspired by Alice, Oz, and Sendak’s Island of Wild Things, Henson intended it to be a love letter to his daughters, even though the Goblin King’s interest in innocent Jennifer Connelly is disturbing, and David Bowie’s bizarrely sexualized appearance contributes to the audience’s discomfort.

The ageless appeal of the film has created a constant licensing presence apparel, plush, bedding and collectables.  And AMC considers it the #2 80s cult film (outranked only by This is Spinal Tap) “inspiring a manga series sequel, a yearly masquerade ball in Los Angeles called the Labyrinth of Jareth, and untold viewings by marijuana enthusiasts worldwide.” 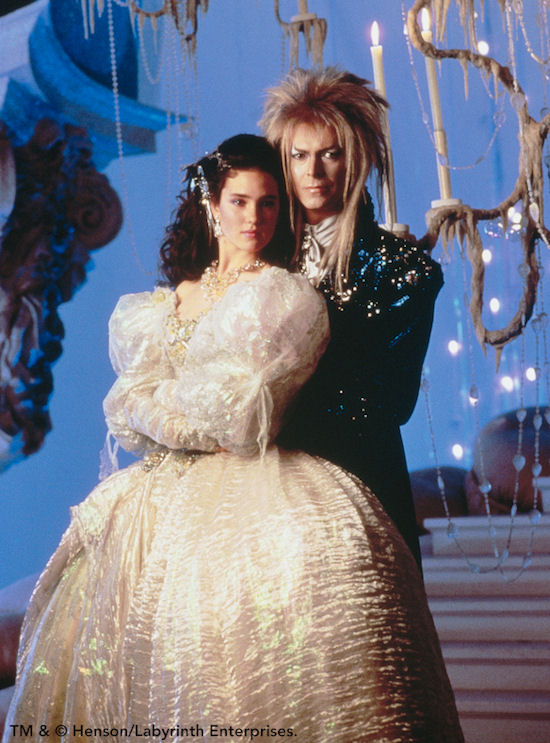