The Lady Eve was the first film I programmed at the North Carolina Museum of Art in 2000. The centennial of Preston Sturges’ birth had just been celebrated in repertory cinemas, and when the American Film Institute published a list of The 100 Greatest Films, he was completely omitted, causing a critics’ uproar. The next list, 10 years later, fixed this oversight, adding Sullivan’s Travels. He was the first screenwriter to direct his own scripts, blazing a trail for everyone who dreams of the credit: written and directed by….(and you can put your own name here). The Great McGinty, Christmas in July, The Lady Eve, Sullivan’s Travels, The Palm Beach Story, Miracle of Morgan’s Creek and Hail the Conquering Hero spilled out in a manic burst of energy between 1940-44. The Lady Eve may seem like a classic screwball comedy, but Sturges combines the gaiety of the 1930s romantic comedy heroine with the 1940s predator heroine in Stanwyck’s cardsharp, Jean Harrington. Her malicious exuberance and alluring wardrobe take advantage of Fonda’s naive ophiologist (snake expert) Hopsie Pike. Comedy allows women to be more aggressive. In a drama, devil-may-care Jean Harrington would become femme fatale Phyllis Dietrichson of Double Indemnity.

Screwball comedy has been described as “sex comedies without the sex.” This genre thrived because the Production Code, enforced starting in 1934, eliminated all racy language, saucy behavior, double beds, actresses in scanty lingerie and so on from films. A combination of the visual comedy of the silent era, wisecracks provided by the Broadway playwrights who came west at the dawn of the talkies and the shimmer of Art Deco glamour were the genre’s hallmarks. The poor were often portrayed as virtuous and the rich unhappy in screwball comedy, and luck made anything possible, particularly where love was concerned.

Sturges brought much of his own unconventional life story to his screenplays. His mother, born Mary Dempsey, recreated herself as Mary Desti, an imaginary part of an aristocratic Italian family. One of her several husbands, the man he considered his father, Solomon Sturges, was a prosperous Chicago stockbroker. Sturges spent much of his youth being shipped between the proper, tailored suit world of his father, and the Grecian-robed Bohemia of his mother, Isadora Duncan’s best friend, and various European boarding schools. Mme. Desti supported herself intermittently with a cosmetics firm Maison Desti, whose best-selling product was a youth creme called “Secret of the Harem.” Sturges created for Maison Desti a kiss-proof lipstick, Red Red Rouge. Another of her business ventures was batiked scarves, and a long, red fringed one she gave as a gift to her friend Isadora, and caused her death, when the fringes caught in the wheel spokes of her open automobile. As a teenager, Sturges assumed Maison Desti would be his career, although he dabbled in others. He was an amateur inventor with a patent on a diesel engine and later in his life ran a popular restaurant in Hollywood, The Players. As he grew older, the financial disparity between his two worlds narrowed, but the philosophies remained opposed: art and commerce, spontaneity and routine, Bohemia and Main St. 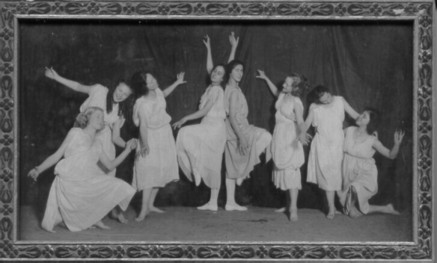 Photo of Isadora Duncan-inspired dancers in Portland, Oregon, c. 1920. Miss Alma L. Wertley, 4th from left (a family friend) was a dancer in The Ziegfeld Follies and other Broadway shows.

Play writing arrived accidentally, as did many things to the dilettantish Sturges, but his 2nd play, Strictly Dishonorable, was the big comedy hit of 1929. In it, an engaged couple squabbles over a flirtation, and the woman must affirm her virtue to her outraged fiancé, since that is apparently her only currency (sigh). Separated from his second wife, Post cereal heiress Eleanor Hutton, (who had given him a glimpse into the lives of the fabulously wealthy) Sturges was lured to Hollywood by the play’s success. He wrote many freelance screenplays during the 30s, primarily comedies, but also a drama, The Power and the Glory that many (including Orson Welles) considered a blueprint for Citizen Kane 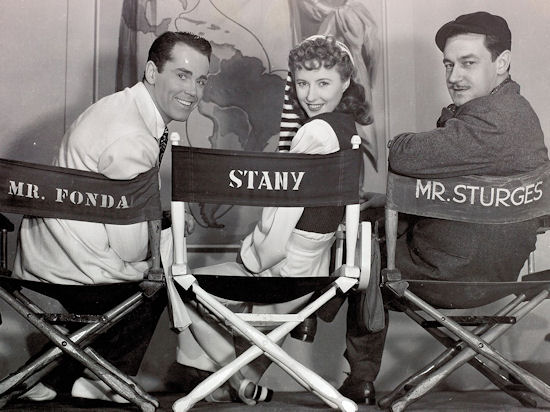 He soon realized the director was the boss on a movie set, and longed to direct his own screenplays. Paramount studios was the most accommodating to creative spirits in the team-oriented studio era, and they bought a screenplay that became the Oscar- winning The Great McGinty, for $1.00 with the promise Sturges could direct it.

After that film’s success, for The Lady Eve he got a big budget and big stars. He wrote part of himself into the character of the timid heir, Hopsie Pike, and part into Jean Harrington and her father, who live by their wit and style, much as Preston and his mother had. He had lived the life of the rich enough to know how these good sons behaved, and had spent time scrambling up and down the social ladder to know how that was done, too. This film is Sturges’ most inventive autobiography.

Two incidents were directly from his own life. One, the divorce scene, mirrored Sturges divorce from his 2nd wife, Eleanor Hutton. The second involves Hopsie Pike’s inability to recognize Jean when she is disguised as Lady Eve. While honeymooning with Eleanor in Conn., Sturges answered the door to a strange young woman. She asked, “And, how are YOU, Preston.” She was his first wife, Estelle. He wasn’t in love with her anymore, so he didn’t recognize her.

Sturges originally wrote his script for Claudette Colbert, but she was unavailable, and Madeleine Carroll and Paulette Goddard were also considered.  Paramount had both Joel McCrea and Fred McMurray available, although they preferred that 2nd tier Englishman, Brian Aherne.  But, Sturges had promised Barbara Stanwyck that he would someday write a comedy for her, and he wanted her and Henry Fonda, who had to be borrowed from Fox.  The comedy clicks in part, because both dramatic actors are cast against type.

Barbara Stanwyck came up the hard way, a Brooklyn girl who’d been hoofing in the chorus line since she was 15. Stanwyck came to Hollywood with her older husband, vaudeville star Frank Fay, to break into movies. Whatever magic he had on stage did not transfer to celluloid. He went from one wretched picture to another, and he drank more and more. He couldn’t tolerate his wife’s success, and their marriage would not last long. Their unhappy relationship is one of the several real-life inspirations of A Star is Born. But, it was Fay who insisted that director Frank Capra look at a test his wife had made for Warner Brothers, convincing the reluctant director she was perfect for the lead role in Ladies of Leisure, her breakthrough part. Stanwyck’s odd beauty, her Brooklyn accent, her vulnerability, her grit and her electric raw emotions appealed to Depression audiences.

Sturges had promised Barbara Stanwyck that he would someday write a comedy for her, after all the women’s films disparagingly called “weepies.” Just before The Lady Eve Stanwyck had starred in Meet John Doe for Capra, and while Capra’s set was like “a cathedral” The Lady Eve set was more like “a carnival.” The morning Sturges shot Stanwyck’s bedroom scene, he wore a bathrobe, to get in the mood (in the #MeToo era, an iffy choice) (Masden 191). 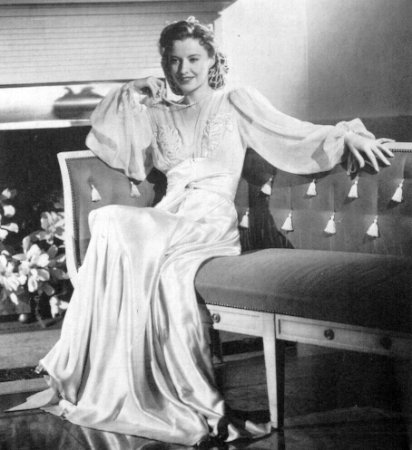 She also had a glamorous wardrobe, designed by Edith Head. Not the first (that would be her Orry Kelly gowns for Baby Face) but the first that was used widely for publicity.  Head experimented with Latin American inspired designs, which were trendy at the time, thanks to the wartime “Good Neighbor Policy.” Head was an expert at fitting (and flattering actresses) and disguised what Stanwyck considered her figure flaws in ravishingly fashionable gowns. Paramount gave her 25 costumes the full publicity treatment, turning Stanwyck into an instant trend setter. “Once you’ve felt the pleasure on introducing clothes which set a new fashion trend, you become much more conscious of fashion” (Jorgenson 91).  Head would dress Stanwyck many times, on screen, in her private life, and even on loan outs to other studios.  Head was less successful in designing a diamond necklace for a snake, which continually slithered out of its costume. 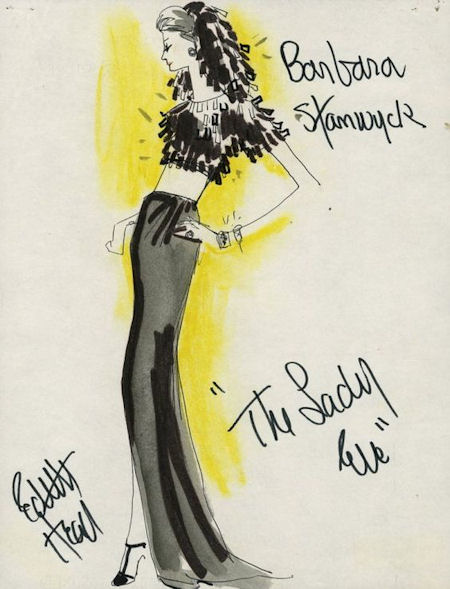 A costume sketch, missing the details of sweetheart shaping at neckline and midriff. 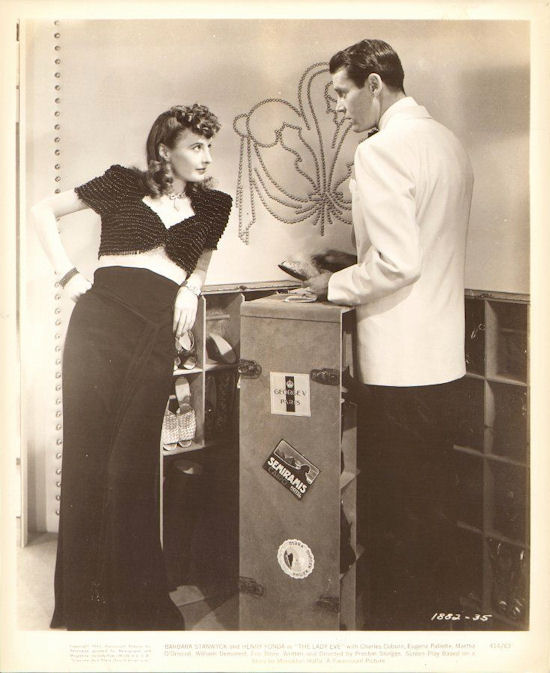 This sepia toned production still shows the rows of beadwork and the sash quite clearly, 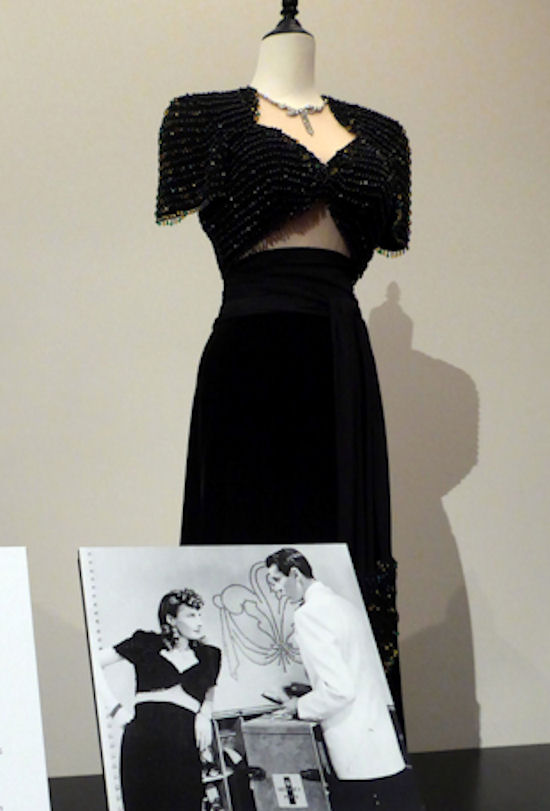 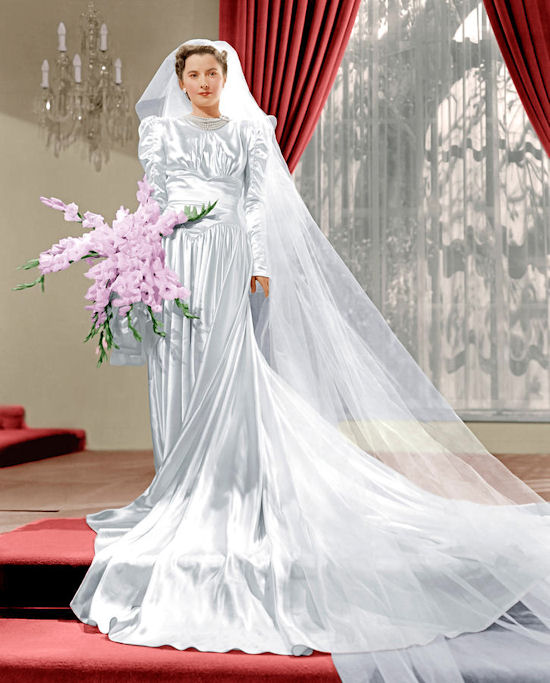 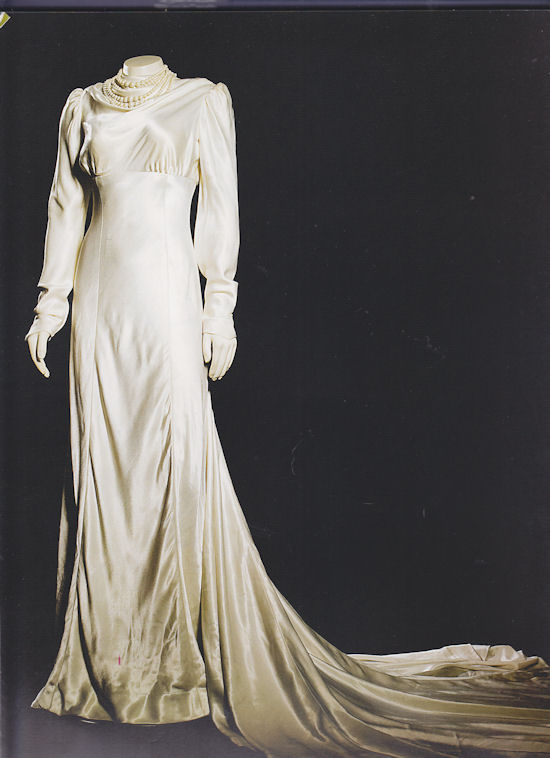 This is positively NOT the same dress, lacking the sweetheart shaped, pointed waist insert, regardless of billing!

Henry Fonda, was of course, also a relative stranger to comedies. He was Abe Lincoln, and Tom Joad in The Grapes of Wrath, after all. One of his biographers notes that he was a very private person in a very public art.  Devin McKinney goes on to observe his performance in this film, “He is beautiful as he sits and reads his book, with humor in his beauty, precision in the lines of his body: Fonda’s physical discipline produces a funniness of being.  Yet, his face is magnificently solemn, impervious to the fluttering of the avaricious debs at surrounding tables, sweet predators who want his body, his money, his mouth, and perhaps even a bit of his strange, private mind” (McKinney 103).  In the scene where Fonda, seated at Stanwyck’s feet, grimaces with repressed desire as she caresses his hair, Stanwyck burst out laughing, over and over again. Sturges used her hilarity, patiently stopping the camera when she laughed, and starting where he’d left off, from a slightly different angle. The editor pieced 30 takes into one of the film’s best sequences (Jacobs 237). The chemistry between them may have been more than acting. “I adore that woman.  I loved her then.  We had a dream time…who do I love and admire? Barbara Stanwyck” (Eyman 98). In a career of playing heroes, this comedy contains the most erotic scene Fonda ever played.  Sturges insisted Fonda do all his own hazardous pratfalls, which he weathered without a scratch. The last day of filming, he left the stage to answer a telephone, fell and sprained his wrist.

William Demarest, playing Fonda’s keeper, Muggsy, is the most prominent of the stage actors, bit players, and silent film survivors Sturges used as a stock company in all of his Paramount films. You’ll see him next time in Miracle of Morgan’s Creek. 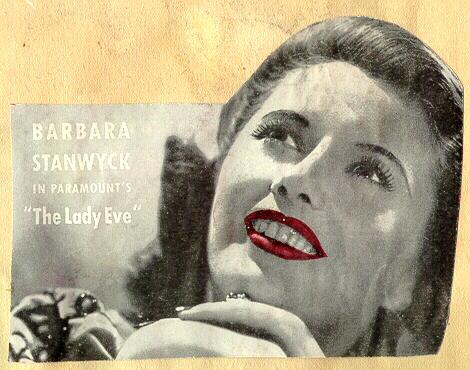 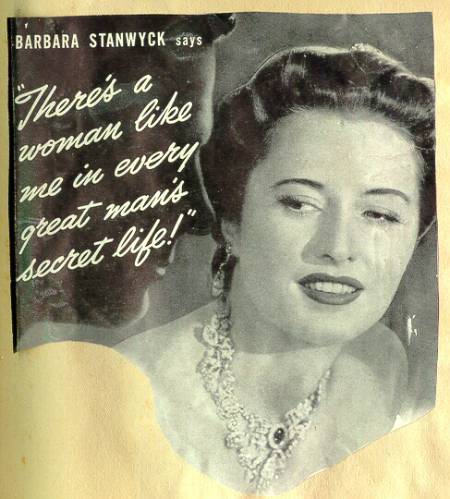 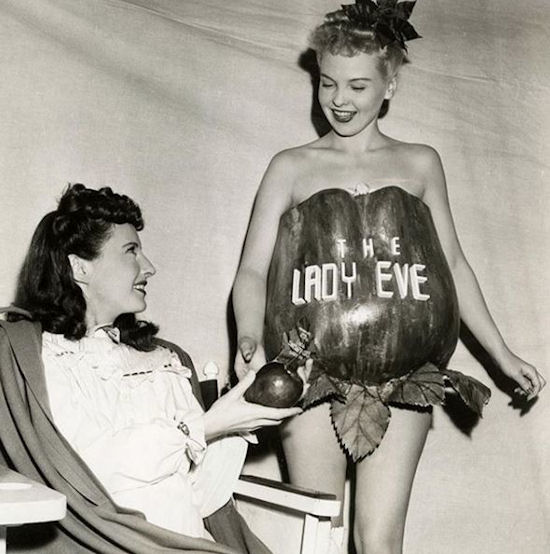 Thanks to the Instagram of The Vintage Costume Collector, who found this crazy publicity image somewhere. Why is the starlet’s apple upside down? What is in Stanwyck’s other hand? Oh, that strained smile…

Sources include: Christmas in July: The Life and Art of Preston Sturges by Diane Jacobs, Preston Sturges by Preston Sturges adapted and edited by Sandy Sturges, The Man Who Saw a Ghost: The Life and Work of Henry Fonda by Devin McKinney, Hank and Jim by Scott Eyman, Barbara Stanwyck by Axel Masden, Starring Miss Barbara Stanwyck by Ella Smith, Edith Head by Jay Jorgenson (Photo of Isadora Duncan inspired dancers in Portland, Oregon, c. 1920. Miss Alma L. Wertley, 4th from left, was a dancer in The Ziegfield Follies and other Broadway shows. Stanwyck photos from anonymous movie star scrapbook, c. 1941. Stanwyck in costume as Lady Eve from Hollywood Costume Design by David Chierichetti. Those hankering after a science fiction version of The Lady Eve might wish to read the witty Corrupting Dr. Nice by John Kessel)