Dotty Miss Froy disappears, and a raffish folklorist (Michael Redgrave, father of Vanessa and Lynn) and a plucky deb must prove she ever existed. “The first time or the hundredth, the special alchemy of laughs, love and terror keeps its spell. The lady may vanish, but the movie stays with us always.” (Chicago Tribune).

Alfred Hitchcock was famous and successful for his English thrillers, The Thirty Nine Steps, The Man Who Knew Too Much and Secret Agent. It was unusual for him to accept a script that had been written without him in mind. Filming of the 1936 novel The Wheel Spins by Ethel Lina White, who specialized in adventures with resourceful heroines, had already begun shooting exteriors in Yugoslavia under the supervision of American director Roy William Neill. Authorities saw the script, which involved a dissolve from goose stepping soldiers to waddling geese, and kicked the company out of the country. At that point, the script needed a new director, and Hitchcock stepped in.

The Wheel Spins took as its inspiration a story written originally by Marie Belloc Lowndes in 1913, based on a supposedly true incident, or perhaps and urban legend, about an elderly lady’s mysterious disappearance from a hotel. Lowndes also wrote “The Lodger” about Jack the Ripper, which was the basis for Hitchcock’s most famous silent film. Lowndes story had also been retold as “The Vanished Lady” in a collection of short stories by Alexander Wolcott, one of Hitchcock’s favorite American authors. The script was already quirky and enjoyable, but Hitchcock insisted the beginning and end be rewritten to his satisfaction. The two screenwriters, Frank Launder and Sidney Gilliat, changed some of the characters from the novel. The hero was transformed from the more stolid dam engineer, to a collector of folk music doing field work. A banker became a magician. The script also saw that Miss Froy’s character was more than an accidental witness, and became a considerably more active character than she was in the novel. A country was made up, as well, with dialogue in the imaginary language of “Bandrieken.”

The film reflects the gathering storms of World War II. British Prime Minister Neville Chamberlain had just appeased the Nazis at Munich, promising “peace in our time.” Hitchcock always loved trains, and set many of his films on them. But this train speeds through a very uneasy Europe, “menaced by conflict, bubbling with intrigue” (Sinclair). Paul Lukas’ Hungarian accent reeks of Nazism, even though the word is never mentioned. And a scene clearly hinted that England was delusional if they thought the Nazis could ever be appeased.

Margaret Lockwood was under contract to the studio and requested the role. She was 21 and had already starred in a dozen films. A popular ingénue, she was considered for a while to be “the first lady of our screen.” (Redgrave). Lockwood had never worked with Hitchcock before. She remembered, “He never really mixed with actors. He knew exactly what he wanted, where the camera had to be set up. So, you did what he wanted, that was it! I could speak for hours with Carol Reed, but Hitch…” (Sinclair). 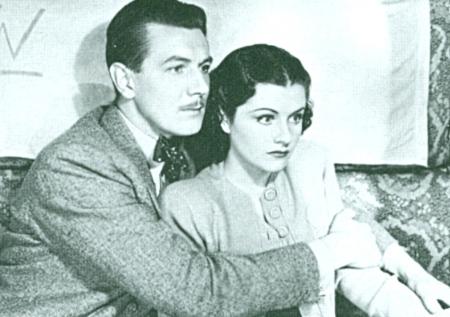 This was stage actor Michael Redgrave’s first film. He was “born in a trunk” or, in the most original phrase, “nursed on rose-pink and cradled in properties” (Findlater) meaning he was nourished by greasepaint and slept just off stage during performances. His father, Roy Redgrave was a minor stage actor and film star known as “The Dramatic Cock of the North” meaning rooster, of course. This was appropriate in more ways than one, since after marrying his second wife, Margaret, he left for an Australian tour, without even seeing his newborn son. Young Michael, named after the church his mother saw out the window of her child bed, was, after a time, sent to proper schools. He graduated from Cambridge thinking he would become a writer, but, instead his honors degree in modern language and English literature, as well as his time spent in school theatrical productions, got him a job as a school master. After three years, at the relatively advanced age of 26, he took his first paying job on the stage. At the time he signed a contract with the Gainsborough studio, he was working in a distinguished repertory company, starring in Chekhov’s The Three Sisters with John Gielgud, who had himself recently starred in Hitchcock’s Secret Agent. He told Redgrave it would be good experience, which is rather amusing, considering he had not particularly enjoyed his time working with Hitchcock. Fellow actor Ralph Richardson, on the other hand, wrote Redgrave a letter which explained, “Films are where you sell what you have learned on the stage.” 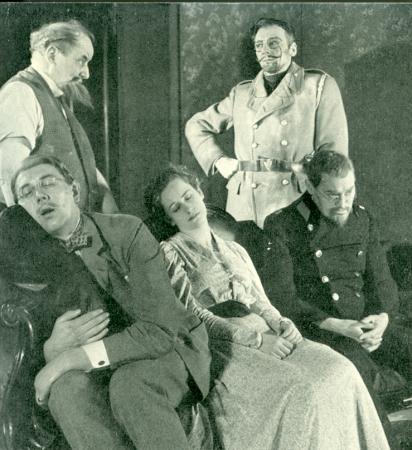 The Three Sisters: Redgrave asleep with his mouth open on left, John Gielgud with hand on hip.

Hitchcock scheduled the first shot to be where the two romantic leads “meet cute’ utilizing the fact that Redgrave and Lockwood had only recently met. Redgrave wrote, “It is possibly the gravest disadvantage of acting for the cinema that one must do an important scene with someone one has never acted with, perhaps never even met, or, as with Margaret Lockwood and myself, met only briefly and in somewhat artificial circumstances. After some initial parrying, Margaret and I got along well, although we remained suspicious of each other for some time.” Hitchcock exploited this uneasiness in front of the camera. “When we started,” Hitchcock recalled, “we rehearsed a scene and then I told him (Redgrave) we were ready to shoot it. He said he wasn’t ready. ‘In the theatre, we’d have three weeks to rehearse this scene,’ I’m sorry, I said, in this medium, we have three minutes.” (McGilligan). Redgrave discovered later he had been lucky to begin with a scene near the beginning of the film, and not one towards the end.

Hitchcock repeated his motto that “actors are cattle” on the set, which did nothing to moderate Redgrave’s snobbism about movie acting. Cinema technique caught him completely off guard. He was shocked that he would have to stand closer to Lockwood for the camera angle than he would on the stage, that he would have to modulate his voice for the sound recording, and that an improvised moment would have to be cut because the continuity wouldn’t match a previous shot scene. So, he decided “Just say the lines and get on with it.” Redgrave remembered, “Being the brilliant master of the technical side of the script that he (Hitchcock) was, he knew he could get a performance out of me, by his own skill in cutting. He knew that mine was a very good part, that I was more or less the right type for it, that I was sufficiently trained to be able to rattle off my lines and that, mercifully, since I was aware that not even the cleverest cameraman could make me look like Robert Taylor, I was never particularly camera conscious.” 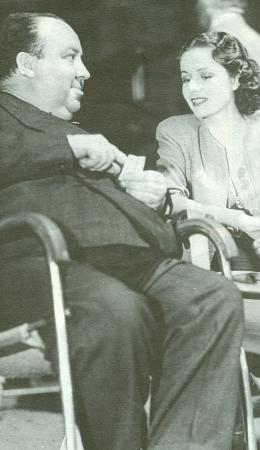 Paul Lukas was a veteran of Hollywood films, and one day greeted Redgrave at 7:30am in the make up room by kissing his hand. “You’re a real actor!” he exclaimed. Why did no one tell me? I saw you in The Three Sisters last night, and boy, you’re a great actor. But here, my friend, you are not even trying.” No, I said, as a matter of fact, I find it intensely boring. But, my dear boy, it’s all going in the can. Once the director has taken the last shot of a scene, it’s too late to wish you could do it again. It’s all in the can!” From that moment, I started to act. I could not bring myself to see the film until 15 years later, but when I did, I could detect, even at that distance of time, the moment when Paul Lukas pulled me up, and I started to try.”

There are two comic couples who reflect the romance of the lead pair, the Todhunters, “off on a dirty fortnight” (Yacowar) and the cricket fans, anxious about missing an important match. The men share a bed and a pair of pyjamas, and are viewed considerably differently today than they were 70 years ago. The actors playing Caldicott and Charters, Naunton Wayne and Basil Radford, played these same characters in a couple of later films, and on a popular BBC radio show.

The film was shot entirely at Gainsborough Studios on a single rather shabby 90 ft set, with miniatures, rear projection and glass shots. There was only one train coach and no exterior shooting. The miniatures are particularly unconvincing, allowing the audience to exercise their imaginations as to the landscape. This was the first film in which Hitchcock had magnified props made (two drugged glasses of wine) to foreground for emphasis, a technique to which he often returned.

Along with The Thirty Nine Steps, this is the most popular film from his British period. The film won international acclaim, with Hitchcock winning the NY Critics Award for Best Director, and The Lady Vanishes was charted as one of the ten best of 1938 by the NY Times. Both actor director Orson Welles and writer James Thurber said they saw it a dozen times, relishing the juxtaposition of political commentary, mystery and humor. The Man Who Knew Too Much had been a hit in American, and while shooting The Lady Vanishes, David Selznick asked Hitchcock to come to the US and discuss making a film based on the sinking of the Titanic. When this film was completed, Hitchcock did sign a contract with Selznick, but there was still time for him to make one more picture in Britain, Jamaica Inn. Of course, the Titanic film was never made, and Hitchcock began his Hollywood career with Rebecca. 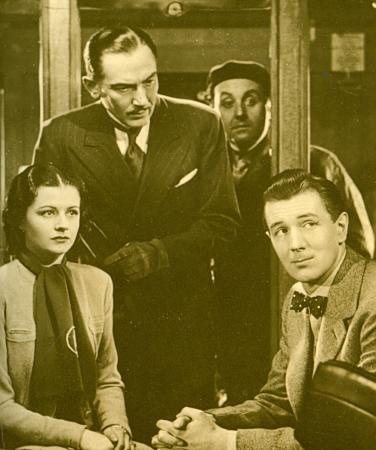 Hitchcock is to be seen near the end of the film, at the station, wearing a dark coat and smoking a cigar.

After the screening at the NC Museum of Art, an excited young woman told me The Lady Vanishes was the best old movie she had ever seen. Many other viewers share her enthusiasm. François Truffaut told Hitchcock, during their extensive interviews in 1967, “Now, let’s talk about The Lady Vanishes. They show it very often in Paris; sometimes I see it twice in one week. Since I know it by heart, I tell myself each time that I’m going to ignore the plot, to examine the train and see if it’s really moving, or to look at the transparencies, or to study the camera movements inside the compartments. But each time, I become so absorbed by the characters and the story that I’ve yet to figure out the mechanics of that film.” 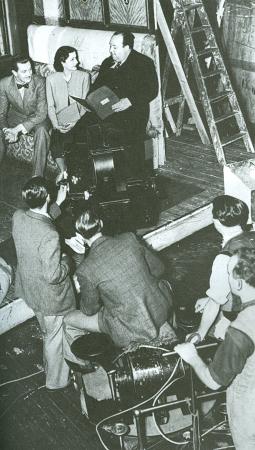