The Ladykillers is a darkly comic chamber piece about a grotesque gang of criminals entangled with an imperturbably eccentric old lady played by 76 year old Katie Johnson. Mrs. Wilberforce lives in a tilting Victoria villa near St. Pancras station in a post WWII London both haunted and enchanted by England’s storied past. This was the last of the Ealing Studio films, which were made intentionally as cinematic ambassadors for post-war British culture by producer Michael Balcon.

In the early 1950s Ealing comedies meant the best of British humor, and Alec Guinness was their undisputed star. In Kind Hearts and Coronets, The Lavender Hill Mob, The Man in the White Suit and The Ladykillers, Guinness reached the top rank of British celebrity. This film premiered the same month the studio was sold to the BBC. Ealing still physically exists–for the moment–Julia Roberts’ Notting Hill was filmed there, but it was slated to be sold and perhaps may already have been demolished. A plaque was installed when the studio was sold in 1955 that reads, “Here during a quarter of a century were made many films projecting Britain and the British character.”

Alec Guinness, who Peter Ustinov described as the “outstanding poet of anonymity,” was an illegitimate child whose sad and shabby childhood drew him to the imaginary world of the theater; “One tried to escape oneself in any way possible,” he said. Told repeatedly he would never be an actor; he worked half-heartedly at an advertising agency. He got a scholarship to acting school and won a prize. One of the judges was his idol, John Gielgud, who soon after gave him a small part in Hamlet at the Old Vic. Guinness was first and foremost a stage actor throughout his career. And, even when young, he was a character actor, never a romantic leading man; and his performances relied on craft, not charm or personality.

His first film roles were in Dickens’ Great Expectations and Oliver Twist for director David Lean. Lean would later direct him in his Oscar winning role in Bridge on the River Kwai. In 1949 Guinness would play 8 roles in the black comedy, Kind Hearts and Coronets, initiating the decade in which he did his most famous and important work; until Obi Wan Kenobi of course. As all his obituaries mentioned, although the percentage of Star Wars that George Lucas gave to Guinness made him a wealthy man, he hated the part. “Those bloody awful, banal lines. I shrivel up every time someone mentions Star Wars to me.”

Interestingly, both the writer and director of The Ladykillers are American. William Rose, the screenwriter (who won the 1956 Oscar for Best Original Screenplay for this film) began writing for British movies in 1948. He returned to the States in the 1960s and wrote Guess Who’s Coming to Dinner, The Russians are Coming, The Russians are Coming, and It’s A Mad, Mad, Mad, Mad World among other films. Director Alexander Mackendrick was born in Boston and raised in Glasgow. This film was a farewell to his adopted country. He left immediately afterwards to direct the cynical The Sweet Smell of Success with Burt Lancaster and Tony Curtis. Rose said he dreamed the original story of this film in great detail, showed his story to Mackendrick and before the script was finished Guinness had agreed to play Professor Marcus. 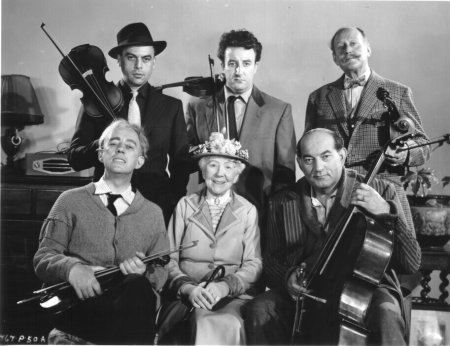 At this time, Peter Sellers was famous primarily as a radio comedian on The Goon Show. He auditioned for the bigger part of One Round, which was played by the more experienced Danny Green. He was given a smaller part, (and he voices the parrot) but when 40 minutes of the film was cut, much of Sellers performance was sacrificed; his big speech was chopped out and Sellers lost confidence in the film. Sellers idolized Guinness and “watched him like a kestrel.” He “saw him playing the fang-toothed, rodent eyed murderous professor in The Ladykillers and confessed himself ’emerald with envy.'” And he eventually did inherit the Guinness-style chameleon roles, most brilliantly in Dr. Strangelove.

The producer, Michael Balcon said in 1960, “It would be easy for me to say now that I always knew he was brilliant. But that was not so. I admired him, thought he had possibilities. I didn’t realize then what I now recognize, that he was a near genius, perhaps a whole one. Genius is a much abused word, but I think Sellers and Guinness have it. One day we were all sitting in the studio canteen when over the loudspeaker came what sounded like the soundtrack from the film. But it wasn’t the soundtrack. It was Peter impersonating all the actors himself on a tape recorder, including the camera director’s remarks as well. People still talk about it at the studio–we were quite shaken.”

Anthony Aldgate and Jeffrey Richards point out in Best of British: Cinema and Society from 1930 to the Present, The Ladykillers is somewhat the reverse of Arsenic and Old Lace. In that film, the eccentric old Brewster aunts are vanquished by a sensible modern couple. “In America, it is age, tradition and the past that are mad and irrelevant, in Britain, they are venerated and triumphant.” Britons have a strong penchant for “brisk, no-nonsense old ladies.” Mrs. Wilberforce, or Mrs. Lop-sided, as Professor Marcus and his gang call her (after the”‘subsidence” of her house) is both dotty and intimidating. As you’ll see to hilarious effect in The Ladykillers, even criminals can be cowed by someone who forcefully reminds them of their old Nanny.

Here is a fantastic site pinpointing locations shown in British films, including those of The Ladykillers: www.carlcorway.cc (This link is broken).