Towed in a Hole (1933) Directed by George Marshall. Laurel and Hardy, Billy Gilbert.

Although sometimes considered lesser than Chaplin, Keaton or Lloyd, Laurel and Hardy were hugely successful comedy stars in both silents and talkies, and remain uproarious crowd pleasers to this day. Oliver Hardy, from small town Georgia and British Stan Laurel (the comedy brains of the team) somehow meshed perfectly as a team of hapless pals. Here, in four irreplaceable 2-reel talking comedies, they adopt a baby, embark on a disastrous camping trip, try to catch fish and play their own wives.

Laurel and Hardy appeared as a team in 32 silent shorts, 40 talkie shorts, 24 feature films and separately (in the early silent era) in 340 films, many now lost (Louvish 195). One was not the comedian, and the other a straight man. They were comic equals to one another, if not in dealing with the world at large.

Stan Laurel, born Stanley Jefferson, came from a theatrical family. His father managed a small chain of theaters, but it was the legitimate theater, and the family was aghast when young Stan took a step down into the music hall. He joined Fred Karno’s company of “speechless comedians” where he ended up understudying their biggest star, Charlie Chaplin, and toured the US with the company twice. Karno specialized in pantomime, in part because censorship of the British stage was strict, and every play had to be submitted for examination—unless it didn’t have any words. Some of the comedy skits were quite influential in both Chaplin’s and Laurel’s careers as screen comedians, mined repeatedly for situations and gags.

Oliver Hardy was born in Harlem, Georgia, and was overweight all his life. He felt like an outsider as he was teased mercilessly, suffering particularly when his widowed mother, who ran boarding houses, sent him to military school. He became interested in the movies by watching them; he was projectionist and all round dogsbody at a movie house after he graduated from high school, where he admired the antics of another large fellow, Roscoe “Fatty” Arbuckle. Hardy left for one of the blossoming studios in Jacksonville FL and by 1914 was playing bit parts in the one and two reel films ground out in Florida one after the other. 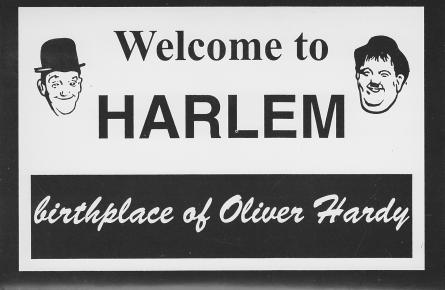 A postcard available at the drugstore in Oliver Hardy’s home town. 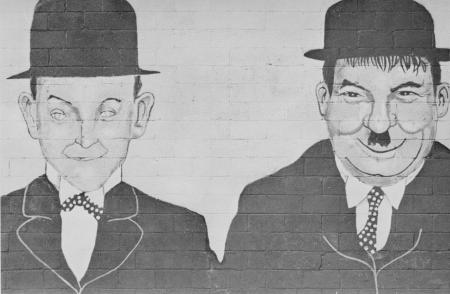 A mural in Harlem, Georgia

Laurel started in silent films three years later, in 1917, and after being hired and fired at a number of studios, eventually became a starring solo comedian for Hal Roach. He parodied hit films, as in “Mud and Sand”, the spoof of Rudolph Valentino’s Blood and Sand, in which he played Rhubarb Vaselino. But his usual brash character was not particularly sympathetic, and nobody appeared to clamor for his films. He worked regularly but never really achieved stardom. Hardy, in his solo films, usually played the heavy and became a regular foil of a now forgotten, but at the time headlining comic, Larry Semon. Semon used him regularly in his popular films, but kept him at a distance, so he wouldn’t become an on-screen rival. Laurel and Hardy were teamed almost accidentally in 1921 in “The Lucky Dog” and met again when they both worked for Hal Roach in the mid-20s. Their partnership finally began to gel in 1926.

The Our Gang comedies were the Roach studio’s biggest moneymakers, with Charley Chase’s comedies a close second. Chase was a “one man gag factory” (Louvish 178) who, under his real name, Charles Parrott, directed and acted for Roach into the talkie era. His brother, James Parrott, was also a talented director, but both of the Parrott brothers had drinking problems that would eventually end their careers. Laurel also directed and helped script films at Roach, and Hardy appeared in 8 of them. Along with Chase and another great comedy director, Leo McCarey (The Awful Truth) they began to refine Roach’s more knockabout visual comedy more to reflect “pity, not cruelty” (Louvish 180). Chaplin was among the earliest in Hollywood to understand the importance of an easily identifiable character recurring in film after film, rather than start all over with each movie. Eventually Laurel and Hardy created characters who would remain unchanged in their classic series of films. Neither age nor changing times altered their essential comedy dynamic. 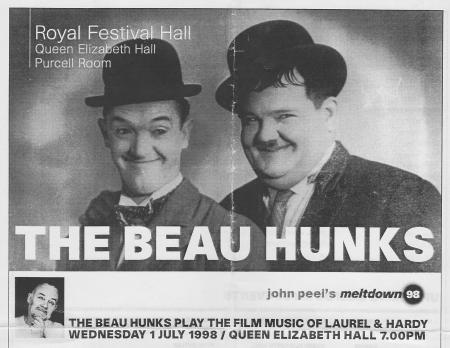 Although many were happy to claim over years of oral history documentation that they, alone, were the ones who teamed Laurel and Hardy (Roach, who lived to be over 100 was the last living of these claimants) it was probably Leo McCarey who was the culprit. McCarey supervised (produced) or directed many of Laurel and Hardy’s classic silent titles, including the first “real” L&H, “Putting Pants on Philip.” Another Roach director was Clyde Bruckman, from Buster Keaton’s comedy greenhouse; he co-directed The General, among others. Laurel and Hardy’s epic silent films like “The Battle of the Century” “Big Business” and “Two Tars” will make people laugh as long as they can be seen on a screen.

“The comedy techniques of Laurel and Hardy have been analyzed forwards and backwards, examined under microscopes and magnifying glasses. Without doubt, the real miracle of the Great Leap into Immortality lies in the boys’ achievement in bridging the painful transition from silent films to the talkies that left so many actors, comic and dramatic, beached like dying whales on the shore. Stan and Ollie’s apparent bad luck in emerging as silent movie stars at the exact moment the silent cinema was doomed, was turned into the greatest stroke of good fortune.” (Louvin 222). Luckily, their voices, a languid one from Georgia and another from Lancashire, England, matched their characters perfectly. Their pace was already slow in their silent movies, as Walter Kerr has pointed out (335) so the talkies didn’t slow them down further. Their rituals were enshrined, and every little glance and gesture would bring gales of laughter. And, they did not make their films too obsessed with dialogue, creating almost silent films that used scant words and clever sound effects to enhance the comedy. Their late silent shorts and their early sound shorts are quite similar. They move, with stately splendor, toward inevitable disaster. This universally identifiable formula continued to increase their fame around the globe. 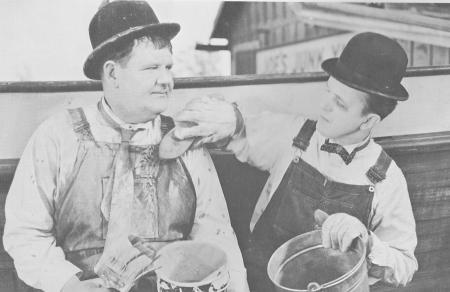 Towed in a Hole

They were quite productive in the early sound era. They made 7 shorts in each of the years 1929, 30 and 31, and 8 in 1932, and reshot many of them for foreign markets in French, German, Spanish and Italian, learning their lines phonetically. “The Music Box” won an Academy Award, and we’re not showing it here only because the saga of a piano being hauled up an impossible long flight of stairs is perhaps their most famous film. Their theme, “The Cuckoo Song” was written by 25 year old T. Marvin Hatley, who later became the Roach Studio music director. A few notes of it instantly identified the happy fact that the next image upon the screen would be the antics of Laurel and Hardy.

They rehearsed in the morning. If Stan didn’t like something, it was changed. Charley Rogers, one of their directors said, “Stan was the spirit behind the director. He never intruded himself, and there probably wouldn’t have been any reason for him to intrude, because all of us worked in real harmony. We were all friends, thank God, and that helped a lot. But whenever Stan suggested something in conference or during shooting, it was almost always the right thing. He, perhaps more than anybody else, knew by instinct the kind of gags needed. He watched closely over the pictures, but it was like kind of a beneficent father, not a bossy one who always wanted his own way at any cost. You see, by nature he is a polite man and a gentle fellow, and those two qualities always came over, in front of the camera, and behind it. He was the director’s conscience. Everyone of us who worked on those pictures had a real feeling for those two loveable, silly characters before the camera, and we tried to remain as faithful as we could to the boys’ conception of them” (McCabe 111). 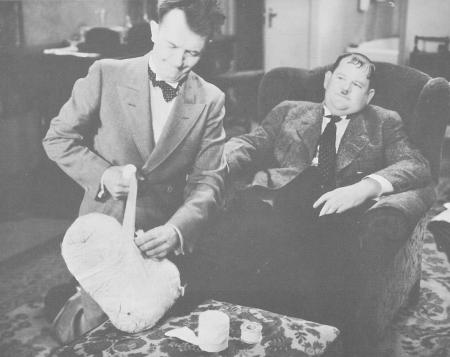 All the films were previewed, and then recut. If one laugh went too long and covered up dialogue, or conversely, something was supposed to be funny and fell flat, the sequence was retimed so there was no dead air. This was standard in the classic Hollywood era. There is nothing more deadly in a modern film that the silence where a laugh was expected, but none materializes.

Hardy was responsible for all his own comedy business, and Stan never directed him. Unlike other comedy teams, they never fought, and never tried to upstage one another. If their relationship on screen was insanely codependent, that was not true in real life. They were not close off the set, however, and rarely socialized. 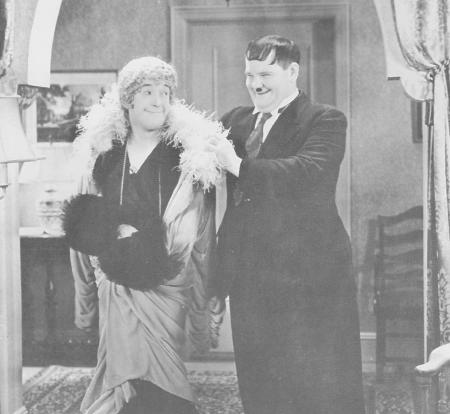 Stan probably wrote “Their First Mistake,” which was their first film after returning from a trip to the UK where they were amazed to be mobbed by their fans. They were overwhelmed by the love that was shown for their films. John McCabe’s story of one stop on their voyage, Cork, Ireland, is retold by Raymond Durgnat, “There were hundreds of boats blowing whistles and mobs and mobs of people screaming on the docks. We just couldn’t understand what it was all about. And then something happened that I can never forget. All the church bells in Cork started to ring out our theme song, and Babe looked at me and we cried” (95).

Although this film has been submitted to unrelenting analysis, I’ll not do so, except to mention that the script was no doubt influenced a bit by their strained marriages, and Hardy’s childlessness, and the recent death of Stan’s infant son. Here Stan and Ollie have to be everything to each other. 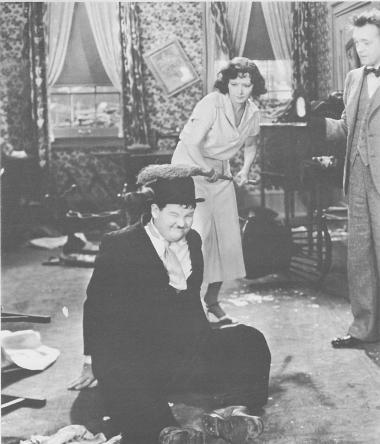 Their First Mistake, with Mae Busch

“Towed in a Hole” was the last film directed by George Marshall, who would go on to feature film glory, directing Destry Rides Again, with James Stewart and Marlene Dietrich, and films for Bob Hope and Martin and Lewis.

“Twice Two” was their last appearance in that old vaudeville staple, drag. It was directed by Jimmy Parrott.

“Them Thar Hills” perhaps needs the explanation for our younger audience members that drinking alcohol was illegal during Prohibition, although that did not stop people from drinking.

Critics writing about Laurel and Hardy frequently stress their childishness, and how it brings everyone in the film down to this same level. “Stan and Ollie can convert a group of normal people into a mass of pie-slingers, shin-kickers and pants-pullers. They bring out the worst in everybody. And to bring out the worst in folks is to belittle human pretensions to anything better” (Mast 192). 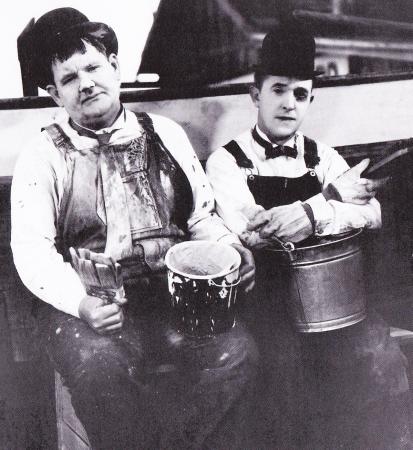 (Harlem, GA postcards and London flier from Moviediva’s collection. Other photos from Everson. Sources include: Stan and Ollie by Simon Louvish, The Crazy Mirror: Hollywood comedy and the American Image by Raymond Durgnat, The Comic Mind by Gerald Mast, Mr. Laurel and Mr. Hardy by John McCabe, Films of Laurel and Hardy by William K. Everson, The Silent Clowns, by Walter Kerr).