“I’ll never let you go, never, never,” says Ellen to the man she loves. Her possessiveness becomes terrifyingly psychotic in this dazzling Technicolor film noir; “…the new technology reached its astounding apogee in the lips of Gene Tierney, as red as a witch’s apple” (Anthony Lane The New Yorker). New Technicolor print from Fox.

The film’s title is a quote from Hamlet, in which the Ghost urges Hamlet not to seek revenge, “leave her to heaven, and to those thorns that in her bosom lodge to prick and sting her.” The novel was written by a Mississippi author, Ben Ames Williams, a prolific writer of 30 novels, whose works were often adapted by Hollywood, although this is the most famous one.

The film is a surprisingly close adaptation of the novel, with some of the dialogue seemingly directly from the pages of the book, the emotions deftly transposed from word to image:

“…He discovered new wonders in her every day. Her beauty was a continuing delight, yet even in their richest hours, with the impersonal mind of the novelist he sometimes thought their roles were reversed; that she was the eager lover, he the consenting mistress, that her passionate abandonments were more profound than his. She might be lost in ardent raptures while he was almost calm, and to see her thus moved filled him with a proud tenderness.

She recognized this difference, said more than once, after a lavish yielding, “I love you so much more than you love me, Richard. If you ever stopped loving me, I’d die. And I’d want to die! This was true of her, yet he knew—with a faint sense of guilt—that it was not true of him. Most men, he suspected, were or might be self-sufficient; it was women who lived to the utmost only through surrender—which was at the same time possession” (Williams 121).

The film is lacking what would have been two lavish (and expensive) special effects sequences, a flash flood in a New Mexico canyon, and an escape from a Maine forest fire. It’s also a book with a great deal of fishing in it, no doubt an interest of the author’s. On the inside of the book jacket he explains that the novel is one of a cycle on the Seven Deadly Sins. “Five were done, but Gluttony and Sloth never came to be written, for there it was, it seemed to me, another Sin more nearly universal and more deadly. Jealousy was a common trait; not the jealousy of which a lover feels, but the jealousy of a mother who resents her child’s affection for its father, of a wife who resents her husband’s masculine friends, of a husband who resents his wife’s interests outside the home.” This is an extremely modern insight into human emotion, which makes it all the more disappointing that while Ellen is a uniquely complex bad girl, Ruth is a boringly predictable good girl. 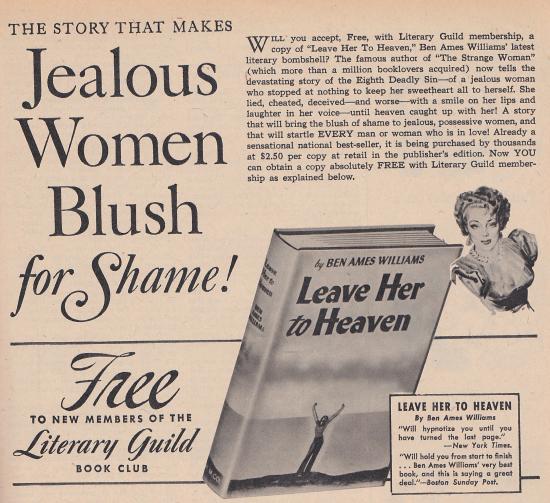 The image on the book jacketof Ellen raising her arms is used repeatedly in advertising both the novel and the film.

Leave Her to Heaven is far from a conventional film noir, in spite of containing an unforgettable femme fatale. It could almost be considered a “woman’s picture” with the focus on the domestic world. At the time, Technicolor was reserved for stories of epic sweep, historical films or musicals, and the choice to shoot such an intimate subject in color was a bold one. Leon Shamroy’s Oscar winning Technicolor photography is veiled in an amber glow meant to carry the same foreboding as the black and white chiaroscuro of conventional film noir. This new print, restored by Martin Scorsese’s Film Foundation, he says has the intensity of a nitrate Technicolor print Scorsese once saw; Scorsese loves this film and says he sees it once every year or two. He intentionally evoked this color palate in The Aviator. “Shamroy’s cinematography conjured up an unsettling superrealist vision. This was a lost paradise, its beauty ravished by the heroine’s perverse nature” (Ballinger and Graydon 129). I saw a nitrate print of this film at the 2018 Turner Classic Movies Film Festival. The nitrate has a softness, an inner light, that gives the film an even more dreamlike aura.

Gene Tierney, is, of course Laura in the film of the same name. She was one of the 1940s most beautiful actresses, but she had a difficult life. Her first husband, designer Oleg Cassini described her as the “unluckiest lucky girl in the world” (DVD) Eddie Muller said, “she lived a life, short of the shotgun blast, as compelling as Laura’s” (Muller 89). She came from a well to do family, and was offered a contract while taking a tour of Warner Brothers Studios as a visitor when she was just a teenager. Her autocratic father insisted she return home, make her society debut, and then audition for the legitimate theater. A featured role on Broadway in The Male Animal resulted in her being spotted by Fox studio head Darryl F. Zanuck, and she was signed to a studio contract. Neither the studio nor her family was pleased when shortly afterwards she married womanizing fashion designer Oleg Cassini. When her beloved parents divorced, it was discovered her father had drained all the money out of a bank account supposedly set up for Gene’s benefit, leaving her nothing. 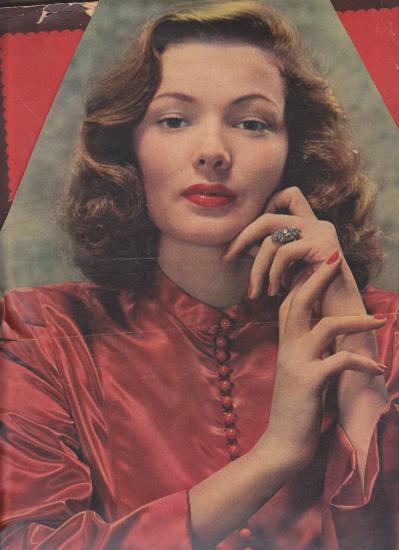 Publicity photo of Gene Tierney cut out for a scrapbook, but never pasted in.

During WWII, she volunteered at the Hollywood Canteen for the USO, and this led to one of the great tragedies of her life. A female soldier, who was supposed to be quarantined for a case of German measles, went AWOL in order to meet her favorite movie star at the Canteen. But, Tierney was newly pregnant, and she contracted the disease from her fan (who actually told her the story years later, not realizing the tragedy she caused). Gene’s daughter was born blind, deaf and mentally handicapped, the child would eventually be institutionalized. Tierney was devastated and her own mental health, never strong, would continue to worsen over her lifetime. She suffered from hallucinations and a lifetime of crippling depressions resulting in hospitalizations and shock treatments. She flirted with jumping of a ledge, but wrote, “If I was going to die, I wanted to be in one piece, a whole person, and look pretty in my coffin” (Muller 91).

In Leave Her to Heaven, Tierney played “the most deranged femme fatale ever” (Muller 90). Tierney wrote “As much as any part I played, Ellen has meaning for me as a woman…She believed herself to be normal and worked at convincing her friends she was. Most emotionally disturbed people go through such a stage, the equivalent of the alcoholic hiding the bottle” (Muller 91). 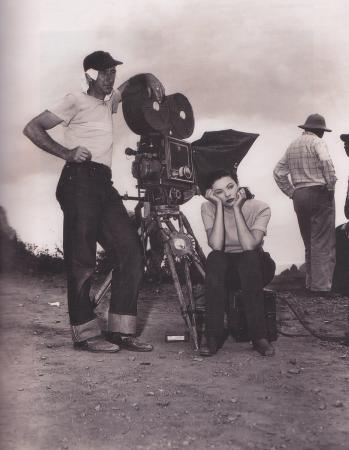 Off camera and on location.

But, her gorgeous face never left her short of suitors, she was pursued by Howard Hughes and John F. Kennedy; Aly Khan preferred her to his wife, another 40s screen siren, Rita Hayworth. Eventually, her mental illness troubles eased, and she married the ex-husband of another screen beauty, Hedy Lamarr. 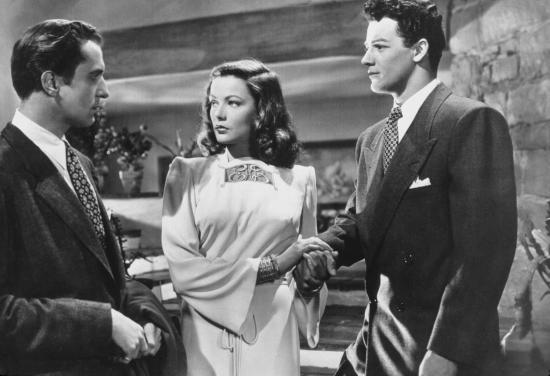 Cornell Wilde was born in Hungary, and planned to be a doctor, taking the pre-Med course at the City College of NY. He qualified for the 1936 Olympic fencing team, but quit the team to pursue an acting career. After being hired by Laurence Olivier as a fencing teacher for a 1940 production of Romeo and Juliet, he was given the role of Tybalt, which led directly to a Hollywood contract. At Fox, he was hired as a second string Tyrone Power, and made many swashbuckling films which capitalized on his sword fighting abilities. In 1945, the year of this film he was nominated for an Oscar for playing Frederic Chopin in A Song To Remember. 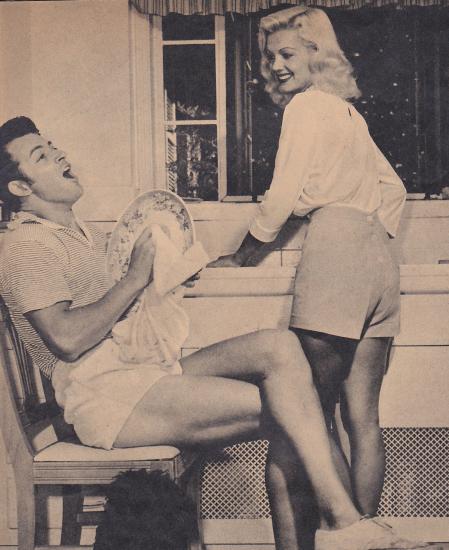 A series of goofy “at home” photos of Cornell Wilde and his wife, Patricia Knight, both in short shorts, was in the same issue of Motion Picture magazine (January, 1945) that carried the ad for the film shown below.

Darryl Hickman was a child actor in many important films during the 30s and 40s, including The Grapes of Wrath and Men of Boys Town. He appeared in over 100 films by the time he was 20. In 1951 he chucked it all and entered a monastery, but returned to acting a year later. His younger brother, Dwayne, also an actor, played Dobie Gillis on tv and starred in Cat Ballou.

Janine Basinger considers the film to be a straight up women’s picture. “Leave Her to Heaven is about a wrong choice made by Tierney, who will not accept a subservient role, and also one made by Wilde, who chooses a woman for her beauty and the excitement she generates in him. When men make these wrong choices in women’s films, it is usually because the bad woman has tricked or manipulated them into it. The underlying message to women is to watch out for one another and to suggest to women in the audience who perhaps are not beautiful or sexy that their virtues will win in the end” (Basinger 97). 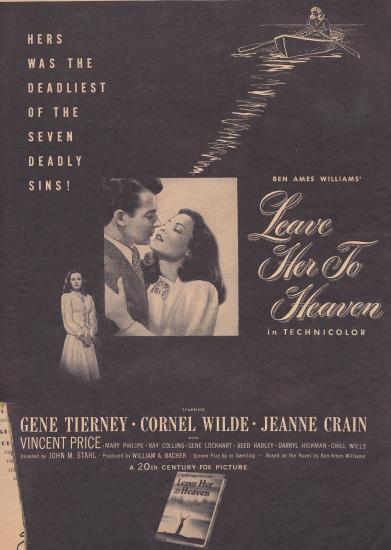 This was Fox’s highest grossing film of the 1940s. Tierney was nominated for an Oscar, losing out to another imposing female, Joan Crawford’s Mildred Pierce. Much is made in critical evaluation of Ellen’s “masculine gaze” staring at a man, the way men stare at women, and the way she takes charge of the relationship, even proposing marriage. The “poor sap” is a staple of film noir, but Ellen is remarkable in the sense that she doesn’t pretend the man is in control, she takes charge openly. 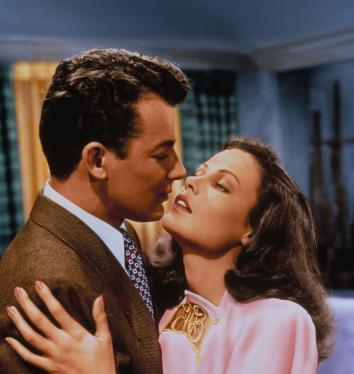 Tierney’s treacherous jealousy is so silky smooth that she never has to raise her voice, “I don’t want anybody else to do anything for you, she tells her husband. And with that, the great conservative promise of postwar domesticity—the man, newly arrived or returned, waited upon by his woman—tightens into a threat” (Lane 83). What is amazing is that the undermining of this domestic fantasy was fully intended, even by Fox’s marketing department. The pressbook suggests planting a letter allegedly written to the editor of the women’s section of the paper by a returning G.I….”Just how much should a fellow getting married today be expected to give up in the way of independence? And, equally important, how much in the way of a monopoly on her husband’s every thought and action has a girl a right to demand? I’d like to know before I begin a half-way serious search for a lifetime companion. (signed) Puzzled Bachelor” (Grossman 78).

Guy Maddin asks, “Has any woman ever looked more awfully gorgeous than when Tierney casts her father’s ashes across her chest in that luridly empurpled and incestuous consecration?” Films like this were made for the big screen, “where the blue-velvet skies and the lethally smooth waters of Leave Her to Heaven” acquire the unquestioned clarity of a fever dream” (Lane 83). 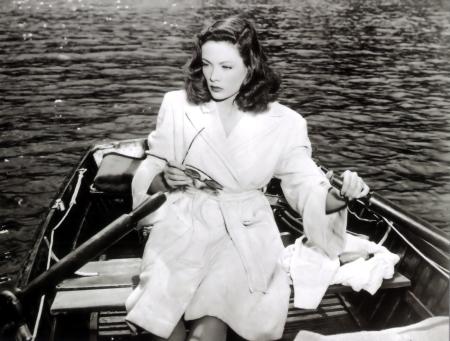 Leave Her to Heaven by Ben Ames Williams, 100 Film Noirs by Jim Hillier and Alastair Phillips, The Rough Guide to Film Noir by Alexander Ballinger and Danny Graydon, Anthony Lane in The New Yorker March 9, 2009, Dark City by Eddie Muller, A Woman’s View by Jeanine Basinger, Rethinking the Femme Fatale in Film Noir: Ready for her Close-Up by Julie Grossman, Motion Picture magazine, January, 1945, and the A&E Biography show on Gene Tierney included in the Fox DVD release of Laura.