Headstrong Sabine de Barra (Kate Winslet) craves a chance to design part of Louis XIV’s gardens at Versailles, and she is not afraid to dirty her hands searching for her personal Eden.  But, she must convince the old guard, including brooding landscape architect Andre le Notre (Matthew Schoenaerts) that her creative designs don’t threaten the status quo.  Ill-suited to the artificiality of the court, Sabine luckily befriends the flamboyant Duke d’Orleans (Stanley Tucci, enjoying himself in his foppish attire).  A Little Chaos proposes that embracing nature is the path to spiritual rejuvenation and that shaping a landscape, shaping a life, shaping the love you give to others is bound to the natural world. 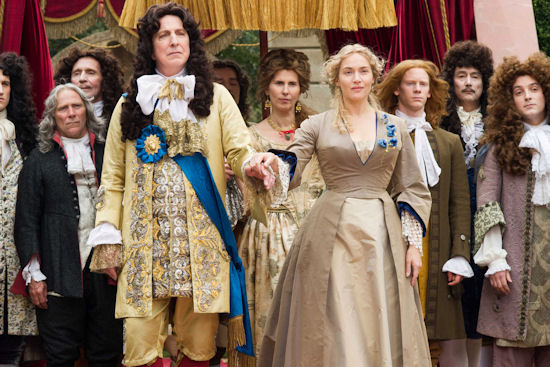 Although A Little Chaos is set in 1682, Sabine de Barra is an imaginary character inserted into the events of the day.  There was no female landscape designer involved in the creation of the gardens of Versailles, and Andre le Notre was 70 years old at the time the film takes place.  Some may quibble at the insertion of a fictional woman within this context, but I have no objection.  The fact is that the usual storyline for women before the 20th century was to marry young, have lots of kids and then often die in childbirth.  It’s rather thrilling to picture women in different historical roles, and the film explains, from the first title card, that little about the film is strictly truthful, even though the outdoor ballroom at Versailles does exist. 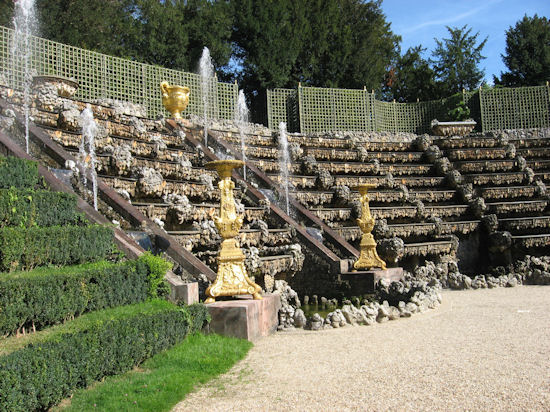 The outdoor ballroom at Versailles today

Alan Rickman had only directed one other film, The Winter’s Guest, 16 years before.  His acting schedule was so busy, especially with the Harry Potter films, he had no chance to return to directing during that time.  Alison Deegan sent him the script five years before, but it took time before his schedule could be aligned. Devoting energy to a low budget period film demands a lot of stamina. “Well, it’s as special as any good script that one reads. I was very close to directing something else, and then this one leapfrogged it in terms of actors’ availability and money and coming together and things like that. I really hadn’t been free to direct anything apart from theater—I’d done quite a bit of directing theater while I was involved with Harry Potter—but you’re shooting that seven weeks every year and that’s enough to make it impossible to direct a movie. This one had just beautiful writing in it, and that’s Alison Deegan, she’s the screenwriter” (EW). This is apparently her only screenplay credit. 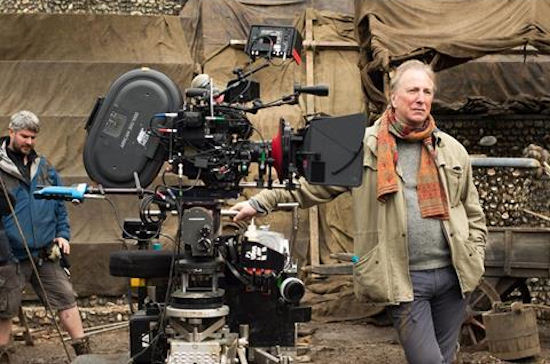 The producers strongly advised him to take an on-screen role, as well, for box office reasons.  He enjoyed directing, “I loved it. It wasn’t easy, though; throwing Kate into freezing water at 1am, the carriage crash, scenes with 80 extras, tight schedules in venues like Blenheim Palace. It’s a constant tap dance between control and freedom and of course the budget guides everything” (Screen Daily).

Rickman and Kate Winslet had worked together in Sense and Sensibility when she was 19 years old.  At the time, she was quite intimidated by him, although now she says he is one of the kindest people she has ever met (BBC).  As for her, he said, “It was like meeting a whole new person. Kate is someone who arrives incredibly prepared, free and non-judgmental. She is a phenomenal craftsperson” (Screen Daily).  Winslet does her usual ace job, making you completely believe in Sabine’s ability and her resiliency.  Unfortunately, there is little heat between her and Schoenaerts, so it’s lucky the main focus is on her agency, and not her love life. 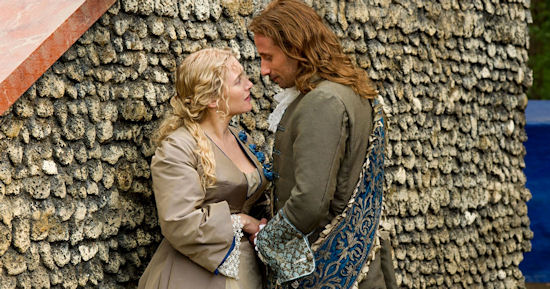 Shortly after the film began shooting, Winslet discovered she was pregnant.  Rickman said, “Yeah. She didn’t know she was, thank God, for the insurance. No, she didn’t know she was pregnant when we started and then she found out. That’s why—it’s a horrible thing to call her a resource, but she is, in miraculous ways, not just her ability to listen to her fellow actors and be there with them. But also her stamina is phenomenal, because she’s in almost every scene. And by the end of shooting, I think she was 14 weeks pregnant, and we were having her thrown in cold water at 1 o’clock in the morning. That’s a pregnant woman down there [in that scene], and that’s a very scared director and that’s a very supporting husband watching it happen” (EW).

The costumes in A Little Chaos are by Joan Bergin, whose other major historical costume job was for The Tudors.  In fact, she was so pleased with her work on that film that she bought about 50 costumes from the production company, many of which are upcycled from the Renaissance to the 17th century for this film.  This means that while the costumes look opulent, they are not historically accurate.  For once, the men’s costumes, especially their full bottom wigs, are more in period than the women’s.  Kate Winslet’s pregnancy presented a costuming problem.  While her baby bump does not show, her bust became difficult to contain, and there are some corsetry moments that look quite uncomfortable.  There are concessions to current taste that sticklers for accuracy find infuriating, for example her loose hair (women all wore their hair up) and her gardening in her stays, which was the present day equivalent of a women working with a gardening crew in her bra.  Doing historical films on the cheap is a challenge, especially from an era in which there are absolutely no actual garments that can be used.  Opulent fabrics are often sourced from India and China, which have distinctive textures and patterning.  When Sandy Powell did The Favourite, she took a completely different tack, embracing the cheapness of the materials and concentrating on pinpoint era accuracy of silhouette.  Much of the lace is laser cut vinyl from the flea market, and the servants all wear recut denim.  Powell’s bold choices keep her film from some of the historical faults of this one.

Rickman’s jewel box of a scene with Winslet is the film’s emotional center.  It was a nightmare to film, as the seemingly peaceful location was under the flight path of a nearby airport, with a plane flying over every 30 seconds. “As an actor, I’m very interested in the power of listening. When people are really listening to each other, there’s an invisible kind of electric current that starts to happen before actors. If people are just taking it in turns to do their speech, that’s [all] you get. But when you get really active listening, something unknown is happening in the space between people. So that’s what I hope is going on in this film” (EW).  At the time he was doing interviews for this film, he was about to act in his final film Eye in the Sky, and clearly had no indication of the cancer that would swiftly take his life.  So, inadvertently, this beautiful scene is almost a farewell to those who have loved him as Professor Snape, Hans Gruber or Alexander Dane. 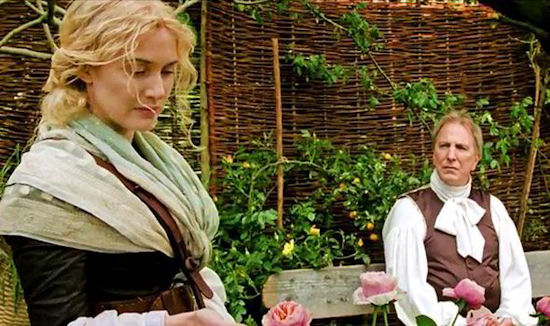 Winslet and Rickman in the private garden