An affectionate skewering–in Skeletorama!—of cheesy atomic monster movies; no cliché is left unexamined in this spoof of the Ed Wood school of filmmaking. Bad special effects, ludicrous dialogue, hammy acting. Do not expect a work of art, just a screaming good time. “We’re the ones guffawing at this deadpan send-up of the 1950s low-budget, B-movie”—horror movie expert Elia Savada. Also the 1937 Ib Iwerks cartoon, “Skeleton Frolic.”

Larry Blamire, the auteur behind The Lost Skeleton, said he always wondered why Plan 9 from Outer Space was considered to be the “worst movie of all time” if it was so entertaining. Clearly, he has a great love for the low budget black and white sci-fi and horror movies that had their heyday in the post atomic 50s and early 60s. Blamire had previously written a play spoofing the same genre, called Bride of the Mutant’s Tomb. This super cheapie monster movie homage was written in five days, the budget was under $100,000. The shooting schedule was 10 ½ days, ten days on location in Bronson Canyon (site of many 50s sci-fi films) and Lake Arrowhead, and ½ day of miniature work. The Lost Skeleton itself was a $100 e*Bay purchase. There was one video camera, the film was shot on high-def video and edited on Final Cut Pro. They only shot around 15 hours of footage, so there were not a lot of retakes, a technique which also evokes the “B” picture era.

The actors were told to behave as if they were acting in a movie for the very first time, so subtlety was out of the question. It’s a fine line between bad acting, pretend bad acting and overacting, but I think the cast has hit the tone perfectly. The music is actual background music from films of the period, acquired from a music archive and painstakingly edited and cued by Blamire. The composers of this indispensable atmosphere are listed in the end credits, even though it was not required to do so.

The Lost Skeleton was acquired by Sony Repertory by Mike Schlesinger, formerly the head of their repertory division, and somebody I knew at college. Mike said he often went to an Independent Film showcase where the usual fare was what he called “navel gazing Sundance movies” and he wanted to know where the less serious independent films were. When he realized he could acquire the distribution rights of this film for relatively little money, he jumped on it.

What’s the latest? Mike says, “RETURNS AGAIN is done! Premiered in October at the Mill Valley Film Festival, had a nearly-sold-out show here (in Los Angeles) at he Egyptian, and we’re now seeking distribution. (Sony wants no part of it. Surprise, surprise.)”

The original has developed an incredibly devoted following, though Sony’s refusal to reprice it so it can be sold cheaply at places like Best Buy’s weekly sales has been a hindrance to wider acceptance. People have parties and invite friends over, or give the DVD as gifts, as I did a couple of years ago. “There are frequent inquiries for the stage rights (even a musical version) and merchandising, and people go around quoting the dialogue like it’s THE GODFATHER.”

Blamire hopes that when you leave the theater you are laughing, but that you can see his devotion to this beloved movie genre. 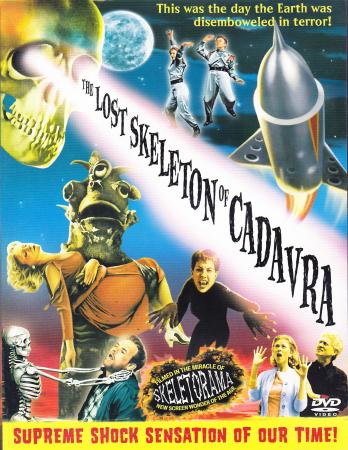