In the murky London fog, beautiful girls are being murdered after replying to the personals, and a chorine (Ball in her glamour puss days) is the bait to catch a killer.  Is it the purring playboy or the cuckoo couturier or…?  “Lured is a delicious plum pudding of a cult movie dating from before the term was used to describe that tangy sector of pop culture heaven” (TCM.com).

Lured was based on a 1939 French noir directed by Robert Siodmak, titled Pieges (a trap or setup).  Sirk told an interviewer later in his life that he never saw Siodmak’s film before making his own version.   Lucille Ball, in her 73rd movie plays a “taxi-dancer” a sometimes euphemism for a paid dance partner or perhaps, an escort, the central character in a film originally titled Personal Column.  It is squarely part of the gothic “gaslight” cycle of films, with atmospherically photographed foggy streets, glistening cobblestones and dim circles of street lamps, a story told in and by shadows.  This is a perfect example of a program film, roundly dismissed as a flop at the time, and breezed over in star biographies, until a beautiful new restoration brings it out of those shadows.  Directed by recent emegre, Douglas Sirk, the setting was moved from foggy Paris to a foggy backlot, standing in for a Jack the Ripperish foggy London.

Sirk is primarily known for his overheated 1950s Technicolor melodramas, like All That Heaven Allows, Magnificent Obsession and Written on the Wind, and admired by directors like Todd Haynes. Hans Detlef Sierck was born in Hamburg, Germany.  He became an important theater director during the 1920s; he was a colleague of Kurt Weill and Berthold Brecht.  In 1934, he switched to film directing, since the Nazis, at the time, had less interest in the movies, because they were primarily for export.  He had a son with his first wife, who became a Nazi.  She barred him from seeing his child, since his second wife was Jewish.  His son, Klaus, joined the Hitler youth, and then became the preeminent child star in Nazi cinema.  The only way his father ever saw him again was on screen.  His second wife left for the US in 1936, and Sirk joined her a year later. In 1937, he came to Hollywood, where in spite of his success in German cinema, he was unknown, and was assigned to B pictures, thrillers and melodramas, like this one.   He managed to transform this genre material through his deep knowledge of the construction of theatrical classics, his profound insights into human behavior, his exceptional camera eye.  He created thrillers steeped equally in European mystery and Hollywood glamour. 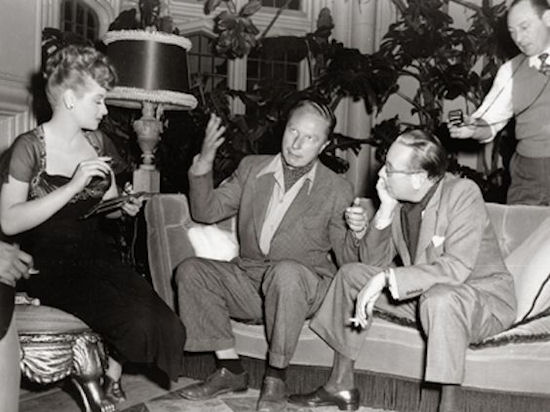 According to Jon Halliday, who interviewed Sirk extensively in the 1970s, “I think his interest in ambiguity was accentuated by the fact that many of his close friends and colleagues became Nazis; the difficulty of trusting people—i.e., of being convinced that one knows who someone else really is and how they will behave under intense pressure, –became a dominant factor in Sirk’s life” (Halliday 4). This film is a perfect example of this tension between trust and betrayal.  He emphasized the layers of deceit practiced by the characters, as Sandra goes undercover over and over through notices in the personal column on police assignment.  He enjoyed casting some of his actors against type to keep the audience off balance, and nobody enjoys this technique more than Boris Karloff.   In the French Pieges, his role was played by Erich von Stroheim. 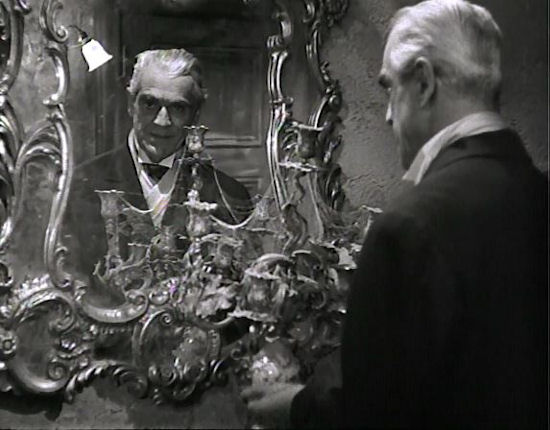 Mirrors! You can’t have film noir without mirrors!

Shot on a miniscule budget on the back lot at General Services Studio, the film appears lush, thanks to Sirk’s strong visual style, and a crackerjack cast, including not just Ball and Karloff, but top billed George Sanders, Charles Coburn and Cedric Hardwicke.  Poverty Row gave Sirk a lot of freedom, even as far as the editing room, and he enjoyed working with the art director, Nicolai Remisoff and the cinematographer, William Daniels.

We tend to think of Lucille Ball as only a tv star, but she had a long movie career first; she was already in her 40s when she played Lucy Ricardo.  Born in 1910, she left school at 15 for a tour of Rio Rita, fired, she worked odd jobs, but then became a Hattie Carnegie model in New York City.  Several of the models briefly became Goldwyn Girls to star in Roman Scandals with Eddie Cantor, but she stayed in Hollywood afterwards, determined to make her way.  Sharp eyes can spot her in the chorus of films like Roberta (she walks in the fashion parade in a crazy feathered cape).  She got more notice in a supporting role in Stage Door and by 1943 she was at MGM, ready to take Ethel Merman’s leading part in DuBarry was a Lady, opposite Red Skelton.  Buster Keaton, long off the screen, was on salary there, to teach Skelton, among others, his comedy skills, and Lucy, determined to learn how to be funny, was an avid pupil.  Lured falls into her free-lancing period, before she became a tv star.  How did she survive longer than other aspirants to stardom?  “Maybe because they turned down more working jobs or social opportunities and I did just the opposite.  As a result, I’ve never been out of work in this town except for two hours between contracts” (Shipman 37). 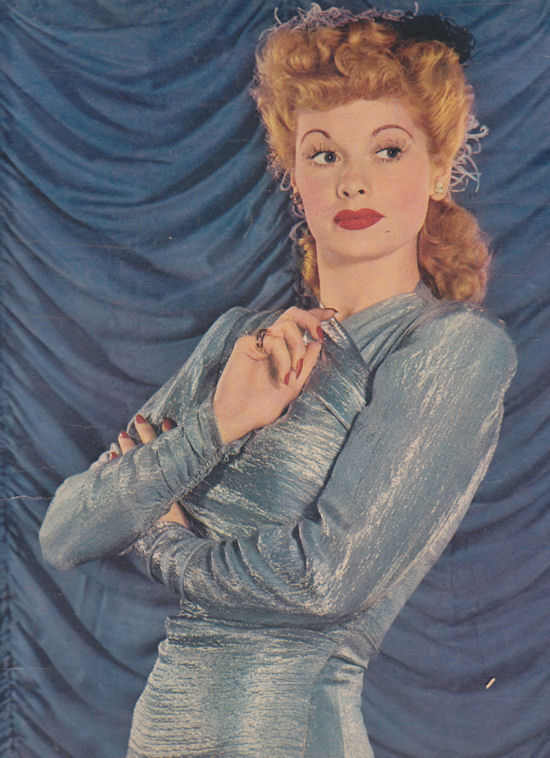 From one of my movie star scrapbooks.

Although Ball’s facility as a comedienne was mostly untapped, she is no cookie cutter starlet, and she uses her outsized personality skillfully in this film.  Her sassy attitude cracks open the staid British style murder mystery.  And she certainly looks gorgeous in her succession of extravagant gowns, enormous white fluffy furs, her fiery red hair lifted in a series of towering 1940s pompadours.  She goes undercover to catch a serial killer who uses the personal column of the newspaper to meet women, the 1940s version of Tinder.  She exploits the way men see her…not smart, but rather sexy and vulnerable.  She’s game to set herself up as bait at the behest of the police after a friend disappears, as she walks into a series of setups that could be nothing or could be dangerous. 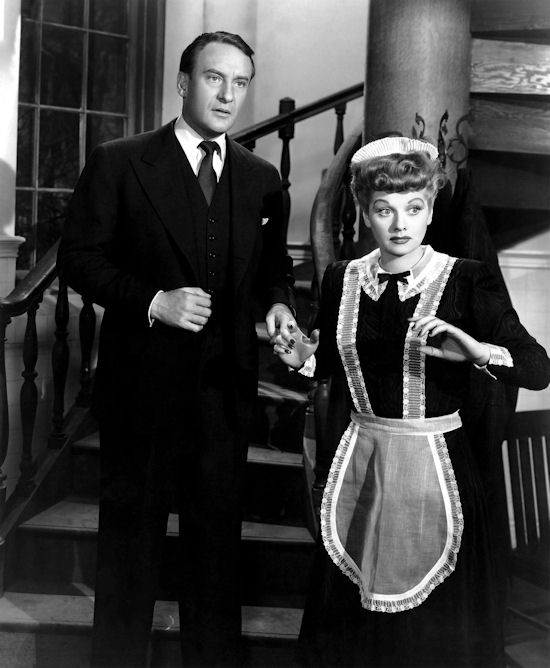 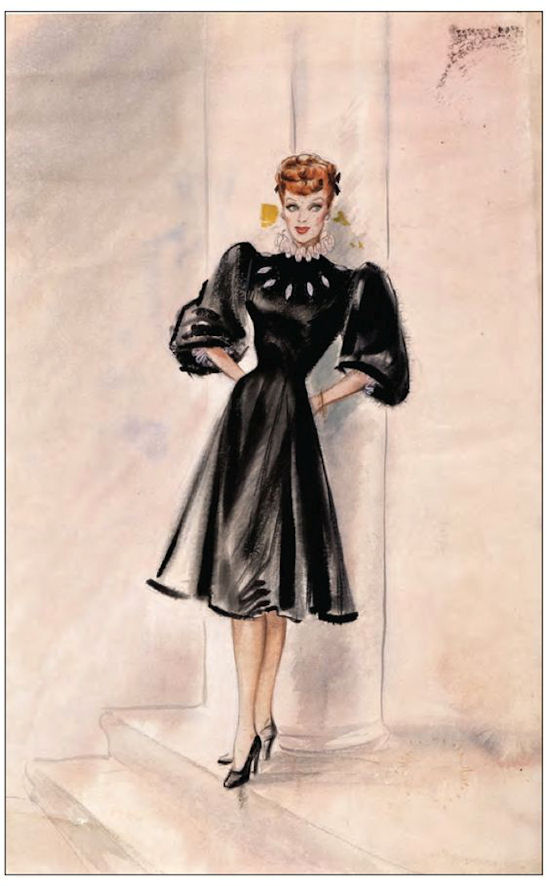 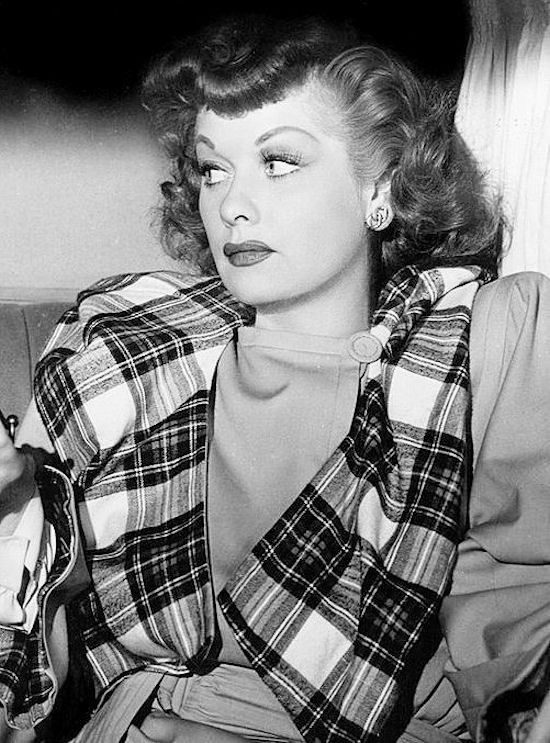 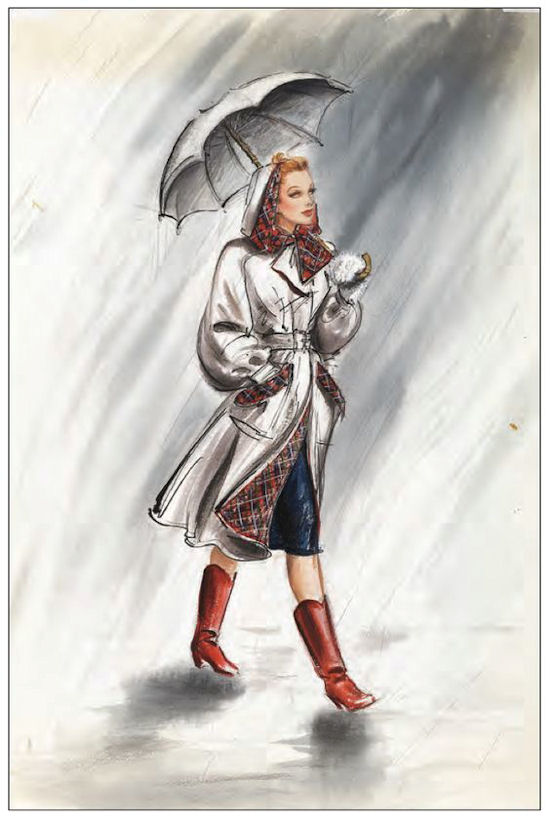 The costume sketches are by Elois Jenssen, who later worked with Ball on I Love Lucy.

In another film made about the same time, The Dark Corner, she plays the loyal secretary of the shady detective Bradford Galt, played by Mark Stevens.  It’s a terrible part!  She has to fall in love with him for no good reason, helps him hide a body that he is being framed for murder over (accessory to a crime, much?) and has to fawn over him, he’s attractive only because of some post war man shortage.  The film has its moments, since Clifton Webb plays Hardy Cathcart, a shady art dealer—with paintings like “Girl with a Pearl Earring” by Vermeer, and Van Gogh’s “Portrait of Madame Rulin” in stock.  He has a partner, Anthony Jardine (Kurt Krueger) who used to be Bradford’s partner, and he seems quite gay, even though he is blackmailing matrons and bonking Clifton Webb’s wife on the side.  Webb has a great line, “I hate the dawn.  The grass always looks as if it had been left out all night.”  Cathcart has married his wife because she looks exactly like his favorite Raphael (a ludicrous fabrication kept in the vault).  Mari Cathcart is played by Cathy Downs, who is so bland as Clementine, in My Darling Clementine, and she is not a very vivid actress, although the cheating wife is a much better part.  The movie would have been so much better if Ball and Downs had switched parts!  Ball would have acted the hell out of the bad girl and would not have been stuck mooning after a second-rate private eye.

George Sanders was top billed in Lured.  He was a fairly big movie star, in fact during this time he made twenty-one films in three years.  In an interview, he said, “I find I made things like Actions in Arabia, Lured and The Scarlet Coat.  I can only assume I was paid handsomely for them, but I am at a complete loss as to what action there was in Arabia, or who was lured where and why.  As to the scarlet coat, did I wear it, and if not, who did?” (VanDerBeets 95). J. Hoberman in the NY Times explains, “Sanders, Hollywood’s suavest cad of the 1940s, typically delivered his lines with a silken, self-satisfied purr and was much appreciated by Sirk for his sense of supercilious irony.” 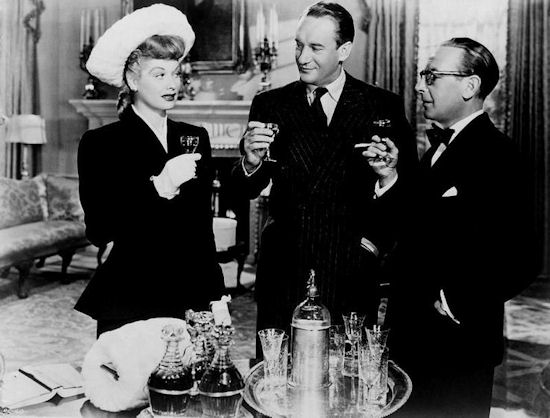 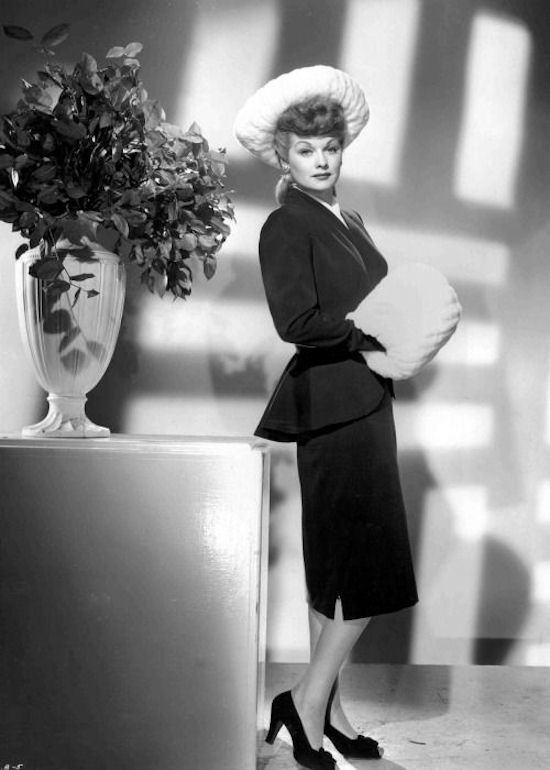 Lucy and Desi Arnaz were already married at this time, and he was not faithful to her.  But her only likely dalliance at this time was a showmance with George Sanders, who was having an affair with Zsa Zsa Gabor, but was not yet married to her.  He seduced women by listening to them (!) and his cultured, bored, attitude led Lucy to conclude he was “the most sophisticated man she had ever met, more interested in money than in acting, charming, handsome, brilliant…” (Brady 154). 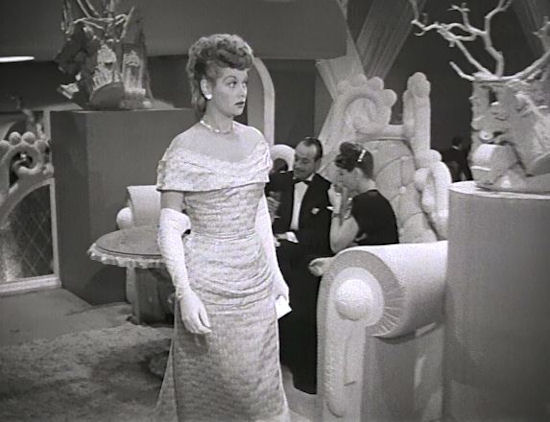 This Hollywood Rococo nightclub is a design highlight. 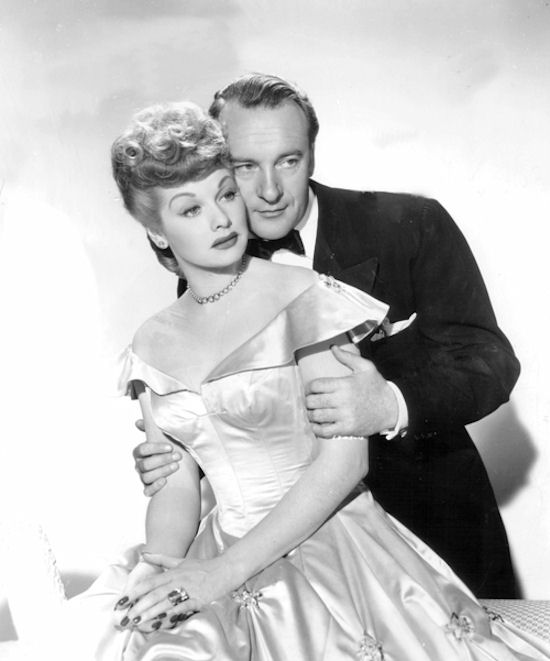 Molly Haskell wrote about Cary Grant, “The ‘heterosexual’ couple of classical cinema encompassed within them and between them all sorts of shifting alliances: dyads, triangles, quartets, the great stuff of Freudian narrative, concealed and revealed. You don’t have to see the perverse shadings and alternative readings in the old films, but they are there: to deny all the homosexual, bisexual, and heterosexual possibilities inherent in the coming together of, say Dietrich or Garbo and their lovers, (Cary) Grant and his; or practically all of the screwball couples; or practically all star couples, is to read film literally and to insist on making unequivocal something whose very charm, whose layered inferences, were based on the equivocal.”

One of the most amazing aspects of this film, which I have not read anywhere, is how two of the characters seem to be in a gay relationship.  Two confirmed bachelors sharing a beautifully decorated house…shades of Gilda.  One of them is even named Mr. Wilde!  Perhaps, it gives too much away to point it out, but when one character says accusingly to another, “you were secretly in love with…” well, let’s just say I was sure that I would hear the love that cannot speak its name under the Production Code.

This film, along with Sirk’s next one, Sleep, My Love, have had bad reputations, dismissed as programmers, and lesser works of an auteur whose gift would bloom in the Technicolor 1950s.  But the fact that both these films have recently been rediscovered and reissued belies the often-misguided critics.  After all, you have only to read contemporary reviews of Hitchcock’s films to see how great moviemaking was sometimes taken for granted. The audience at the North Carolina Museum of Art embraced this film enthusiastically. They loved Lucy, and Boris Karloff’s hammy turn. One audience member said he appreciated all the suspects being laid out in an organized fashion, so the plot actually made sense (if Sandra’s sudden engagement does not!). Another excellent selection from the Cohen Film Collection. 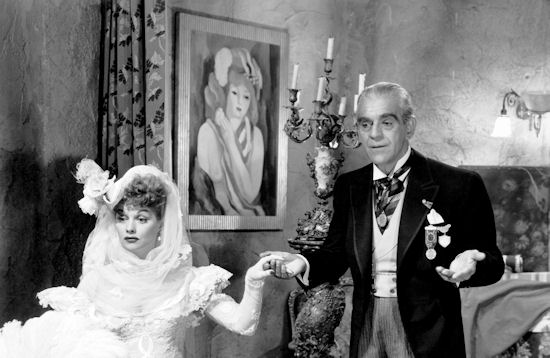