An efficient factory foreman, yearning for the lemon-scented sun in his Sicilian village, packs up the wife and kids for a long delayed holiday. Paying routine respects to the Don has chilling consequences when he’s asked for a favor that can’t be refused. “An utter blast!” (NY Times).

Alberto Lattuada was born in Milan in 1919. At the age of eight, he became entranced by the opera while standing in the wings of La Scala with his father, a well known composer. He came from a culturally diverse, financially well-off family. While in his late teens and early 20s, during WW II, he worked on left wing periodicals and wrote antifascist articles. He studied architecture at the university and his architectural studies lead him to designing for sets the cinema. By the 1940s, he had decided that filmmaking would be his career and he directed his first film in 1942. He developed a fondness for American gangster films, an influence not usually associated with directors of his generation, neorealists who were interested in hard truths and antifascist protest. “The sense of affinity with opera and melodrama is at the root of Lattuada’s conception of the cinema, puts him in the nerorealistic movement closer to Visconti” than to the more rigorous, Marxist directors like Rossellini and De Sica. Although few of the titles of Lattuada’s films would be familiar to the average American moviegoer, he continued to write and direct for fifty years.

Lattuada co-directed Variety Lights with Fellini, probably his most well-known work. He has been overshadowed by his contemporaries, because comedy always holds an undeservedly lower place in the pantheon, and because he couldn’t rid himself of the disdained influences of American crime movies. Mafioso falls in an era in Italian film history when the neorealistic movement shifted away from the effect of the war and its privations to the impact of WWII on the emerging post war society. It also examines Sicilian emigration in the context of rapid social change. The film’s hero works in an efficient Fiat factory in Milan, and his urban life is the polar opposite of his childhood in Sicily, where ancient customs are unperturbed by modernity.

The Southern Italian is often viewed as “other” in Italian cinema and Lattuada considered Mafioso to be almost a work of ethnography. The detail of both Antonio’s home life in Milan, and the suffocating embrace of his Sicilian family and home seem meandering, but the background roots the plot twist. There is, as in so many cultures, including our own, the idealization of village life. A distinct polarization is also at work here: Antonio is dark and from the south, Marta is fair and from the North. In Sicily, “respect and loyalty are identified with economic exchange, and social protection” and memories of WWII remain fresh. Antonio’s wartime favors are not repaid and he will wish that he had remained in the embrace of Milan’s industrial optimism

Alberto Sordi was born in Rome. At 13, he won an MGM contest by imitating Oliver Hardy, and later got a job dubbing Hardy’s voice when the comedies were released in Italy. He became a comedian on the music hall and legitimate theater. Sordi began acting in films in 1938, and over the course of a long and prolific career became one of Italian movies most beloved stars. He starred in a couple of early Fellini films, The White Sheik, and I Vitteloni, and often played comic characters satirizing Italian society. Beloved in Italy, he had a limited international career. He never married, and died at the age of 82.

The success of Mafioso as comedy, a thriller, and as documentary is possible because of the director’s neorealistic roots. If the baked, backward, welcoming and simultaneously threatening homeplace was no so believeable, the dark comedy could not succeed. J. Hoberman in the Village Voice suggests this is the first film to display the workings of the modern mafia, “Given the movie’s virtual dictionary of mafia euphemisms, it’s hard to believe that Mario Puzo hadn’t seen Mafioso while writing his novel; it would be fascinating to know if Martin Scorsese (just 21 and still living at home?) caught the movie when it played 42nd Street during the summer of 1964.” After this brief run in NYC (where it was described as “a cinematic curiosity. Try to see it” FIR) Mafioso disappeared for 40 years, until its recent rediscovery by Rialto Pictures.

“Italian filmmakers are more sensitive to reality than marked by the weight of culture…Philosophy, intellectual habits and cultural preparation do not influence the birth of a work. It is while walking in the street that the Italian filmmaker experiences the need to say something.” (Lattuada in Armes)

Lattuada believed “It is wrong to cut yourself off from the mass audience, for if you make a film only to be shown to a few friends, it would be better to write a pamphlet.” (Armes). 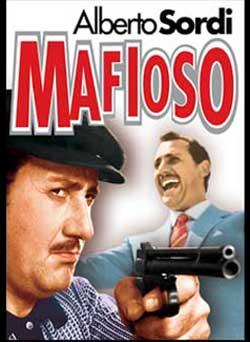