A cranky radio personality slips on the ice while visiting remote Ohio and must recuperate in the hinterlands during Christmas, in this comedy gem by George S. Kaufman and Moss Hart. Woolley was born to play sardonic Sheridan Whiteside, scowling and scheming as perfect storm of wisecracks circles his wheelchair.

The character of Sheridan Whiteside is closely modeled on the well known foibles of Alexander Woollcott, who was one of the first media celebrities. At the age of 10 Woollcott had announced, rather than be a fireman or a cowboy, “I would rather be a Fabbulous (sic) Monster” (Bach). After college, where he turned heads by wearing a turtleneck sweater, corduroy pants and a red fez, he went to New York. His vitriolic theater reviews made him the most well-known theater critic in America, the first with a national reputation. He was fawned over and feared. A member of the famous Algonquin Round Table, without him “the vicious circle” would not have existed. He was inescapable in print, on the radio, and caricatured in famous movies, as Waldo P. Lydecker in Laura and as Addison DeWitt in All About Eve. He devised the “Shouts and Murmurs” column, still published weekly in the New Yorker. He was the first on-air book reviewer, creating overnight successes like James Hilton’s Lost Horizon, a broadcasting power untapped until Oprah. He appeared in advertisements endorsing products and in movie trailers. He was a frequent White House guest, and had his favorite drink, the Brandy Alexander, named after him. He was loved and loathed for his waspish tongue. Starting in 1929, his “This is Woollcott speaking” became his unmistakable catch phrase on the radio.

Woollcott visited playwright Moss Hart’s home, where he had acted the diva, demanding his host’s bedroom, with freshly made chocolate cake delivered to him bedside. After writing a withering insult in his host’s guestbook, Hart drove him to Philadelphia at his command, saying, “I would have gone to Alaska to get him out of the house” (Bach). Woollcott announced he dreamed of being the star of a play the Pulitizer Prize winning authors, Moss Hart and George S. Kaufman of You Can’t Take It With You, would write just for him. They unleashed their talents on an unmistakably wicked caricature of him. He read the play and thought it was funny, but also realized the part was beyond his meager acting abilities, and encouraged the authors to create the character however they wished. The play was dedicated to him “To Alexander Wollcott—For reasons that are nobody’s business.” John Barrymore was originally considered for the part (as he would be later for the film role) but his alcoholism was much too advanced for him to take such complex role. He had been reduced to using cue cards (which were invented for him) on stage and screen, impossible for this demanding role. 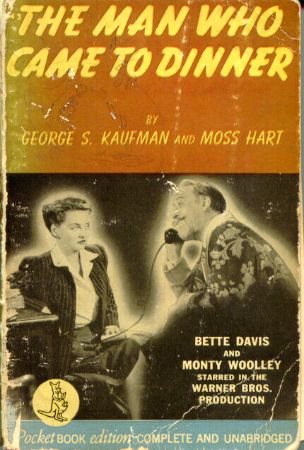 Other characters were also parodies of well known personalities of the day. Lorraine Shelton was modelled on actress Gertrude Lawrence, Beverly Carleton on Noel Coward (with a Noel Cowardish song written for him by no less than Cole Porter) and Banjo was Harpo Marx. “The play doesn’t satirize celebrity or celebrity worship, it revels in the fun of being a celebrity, the privileges of fame, the giddy sense of being a somebody among nobodies and the immunity from convention that allows the famous to get away with almost anything” (Bach).

Bette Davis was a long way from her starlet days, which we saw last week in Three on a Match. She was now a major star; Warner Brothers #1 female star, in a day when women ruled the box office. It was she who encouraged WB to buy the smash hit, The Man Who Came to Dinner, after she saw it on Broadway starring Monty Woolley. She dined twice with Kaufman and talked about a film adaptation. He had washed his hands of Hollywood after becoming embroiled in Mary Astor’s contentious divorce. Portions of her diary were read at the trial, detailing a torrid affair with Kaufman, and he had fled Hollywood, never to return. He and his partner Moss Hart banked the record quarter million dollars Warners paid for the play (a sum equaled only by the price paid for Abie’s Irish Rose in 1929) and Julius and Philip Epstein, the twin brothers whose next film assignment was Casablanca, wrote the screen adaptation. 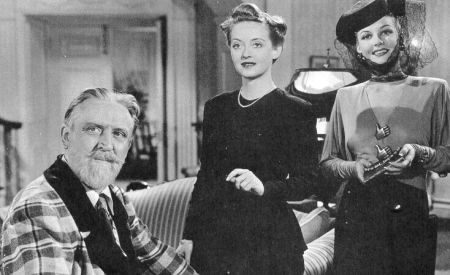 Warners producer Hal Wallis were rather cool to the idea of a film version of the hit play at first, but if they did make it, they wanted Jean Arthur or Myrna Loy to star. They certainly did not want Broadway star Monty Woolley, a stage actor who also taught drama at Yale as the leading actor. Davis hoped she could co-star in it with John Barrymore as cranky Sheridan Whiteside. Although Barrymore tested for the role, he was far too ill to play the part. Davis insisted on seeing the tests for herself, when she saw how dreadful he looked, “she cried, out of sheer vexation at having her will thwarted and out of pity for a once great actor now headed obviously for the exit door, in life as in his career” (Quirk 235). Barrymore died shortly after the release of the film in January, 1942. 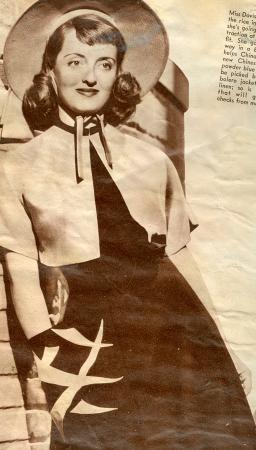 Charles Laughton was interested in the part, but Warners hated his test. Cary Grant said he would do it for free, if $125,000 was donated to British War Relief, which briefly interested Howard Hawks in directing. Frederic March, Robert Benchley and CharlesCoburn were all considered. Maybe Mary Astor would play Lorraine, Ronald Reagan, Bert and Danny Kaye, Banjo. Most intriguing of all, Orson Welles was looking for something to do after Citizen Kane. He’s do it for $100,000, kick in another $50,000 and he’d direct, too, maybe with Barbara Stanwyck, Paulette Goddard or Carole Lombard. At the end, it went full circle. Bette Davis would play Maggie, and Monty Woolley would recreate his stage role. Woollcott was piqued because he was not considered at all for the film role, and insisted on being paid a fee so that his name was not mentioned in connection with the film, even though all and sundry already knew it was about him. 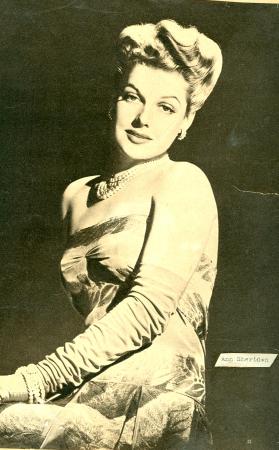 Monty Woolley taught drama at Yale (Thornton Wilder and Stephen Vincent Benèt were two of his students) and had been acting in New York since the late 1930s, famous, if at all, for his roles in Cole Porter musicals on Broadway. He was known for being a “man about town” and was also as openly gay as one could be in the 1930s. One can’t help but speculate if this reputation, much more acceptable in New York’s theater world than in Hollywood at the time, was one reason that Warners hesitated to cast him. Sheridan Whiteside would be Woolley’s personal triumph on film.

Contract director William Keighley would direct. Davis’ rather mild evaluation of the finished project was, “I felt the film was not directed in a very imaginative way. For me, it was not a happy film to make” (Sikov 186). Matters were not helped when she was bitten on the nose by her Scottie dog, and went to her house back east until it healed and she could film again. 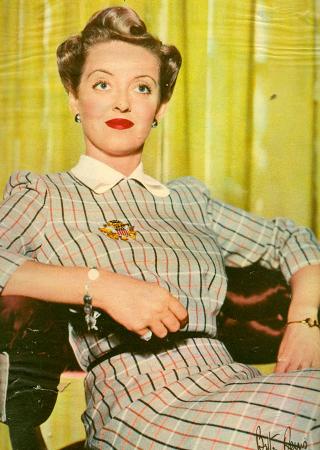 This publicity photo shows Davis in one of the costumes from the film–in color! Note odd folded over collar.

Some expected fireworks between Davis and Ann Sheridan, who had the much flashier part of Lorraine Sheldon, but Sheridan was a down to earth person with no interest in on set cat fights. She was born Clara Lou Sheridan in Denton, TX, the youngest of five children. When she was in college, one of her sisters sent her photo to a Paramount “Search for Beauty” contest, and she was one of six finalists who came to Hollywood with small contracts, and the only one who stayed. Sheridan did extra work, doubled and did inserts (close ups of hands and feet) until her contract ran out, and then she moved to Warner Brothers, and changed her name to Ann. She was dubbed “The Oomph Girl” and some articles said she disdained the title. But she said in a later interview, “It was a press agent’s invention, but I adopted it whole heartedly” (Hagen and Wagner 176). She was filming two movies simultaneously, she would spend one day in the serious film King’s Row, a part she had dearly wanted, and the following day on this comedy. The two vastly different parts had different wardrobes, hair and make up. As a contract player, she was paid the same amount of money, no matter how many films she worked on. 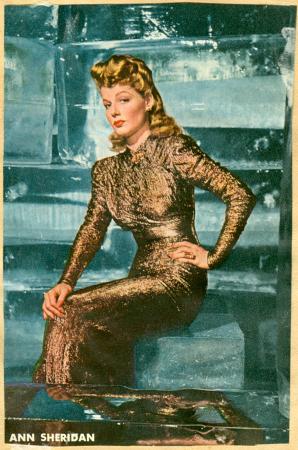 There was no conflict between the two female stars, Sheridan said wryly, “They were always trying to start a feud between Bette and me, the Warner publicity boys” (Hagen and Wagner 180). “Annie just didn’t rub her wrong—in fact, flattered her by asking advice on the timing of her lines, stuff like that. Davis ate it up, she loved playing God” director William Keighley said (Quirk 236). Even though it was a secondary part, Davis had lobbied for it, and played it with restraint and grace. John Barrymore, no doubt saddened at the loss of the role that would have allowed him to exit at his peak, sent Davis and Woolley a congratulatory wire.

The Man Who Came to Dinner is a beautifully written play, where even an actor playing a delivery man gets his chance for a big laugh from the audience. Everyone contributes to the merriment, with the exception of Richard Travis, a bland leading man, perhaps a result of the wartime leading man shortage. It’s hard to believe that Bette Davis’s character would give up her exciting career for a life in Ohio as his wife, but it wouldn’t be the first time that female audience members were required to suspend belief in such a matter. 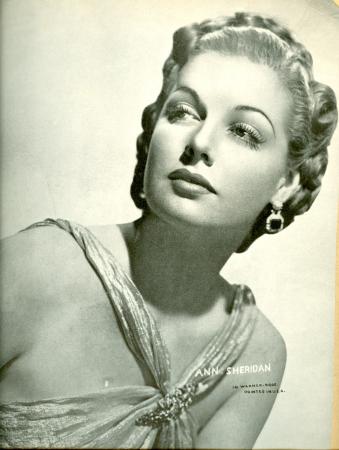 Alexander Woollcott, the real Sheridan Whiteside, died one year after the film in 1943, stricken with a heart attack in the middle of a radio broadcast. His celebrity became a casualty of the media culture he helped create. Once ubiquitous, with the exception of his satiric portrayals in the movies, he is now forgotten. 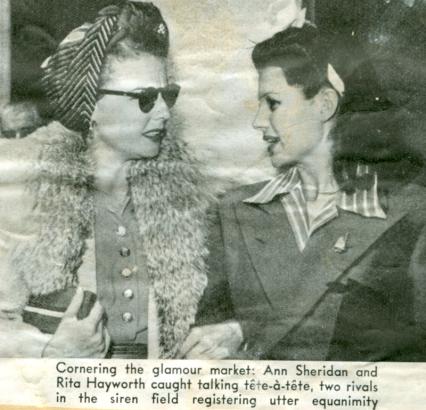 (Photos (except for 2nd photo, from Ringgold) from Moviediva’s movie star scrapbook collection. Sources include: Fasten Your Seatbelts by Lawrence J. Quirk, Bette Davis: A Biography in Photographs by Christopher Nickens, Dark Victory: The Life of Bette Davis by Ed Sikov, Killer Tomatoes by Ray Hagen and Laura Wagner, Dazzler: The Life and Times of Moss Hart by Steven Bach, George S. Kaufman and his Friends by Scott Meredith, Film Encyclopedia by Ephraim Katz, Films of Bette Davis by Gene Ringgold)