Mann and Akele Hum Akele Tum star Aamir Khan and Manisha Koirala, reproducing and Indianizing two famous American films. Mann (Heart) is a romance closely based on the tear jerker An Affair to Remember, about two shipboard lovers who vow to meet six months later at the Empire State Building, until cruel fate intervenes. Akele Hum Akele Tum (I’m Alone and You’re Alone) is a remake of Kramer vs. Kramer, which won an Oscar as the Best Film of 1979. Both films adapt their source material to suit a different audience, with Mann an improvement on the original, and AHAT a completely different interpretation of similar material, arriving at a unique resolution.

In Mann, Dev (Aamir Khan) is not a God, but considers himself God’s gift to women. He’s introduced on the dance floor, swaying with his heroine from Ghulam, Rani Mukerjee (in a special appearance). He sings of her snake like black tresses, but it is he who looks like a snake, in a shimmery silver silk shantung suit. It’s only a matter of time before he meets cute with the virtuous Priya. They are both on a cruise ship, he to visit his Dadi Ma (Grandmother) on an island port of call, and she to enjoy a prize won at a cultural competition, a necessary explanation of her solo travel. She refuses to fall for his line, and he respects her for it, and they embark on a program of shud dosti, pure friendship. Love blossoms, of course, at the feet of Dadi Ma, played by Sharmila Tagore in a ghastly white wig and dark eye circles. By the end of the voyage, they have pledged eternal love, and arrange a meeting in six months at the Gate of India, after managing to untangle themselves from their previous obligations. But, it is not to be. 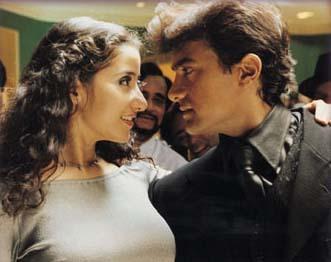 Mann is not a perfect romantic fantasy. Some of the impediments on the way to bliss are a parade of extremely annoying “comic” characters and a mob of cutsey kids. To complicate matters, the DVD transfer is so distractingly bad, the actors’ heads are cut off at the top of the frame. Manisha is an uneven actor, and here she is huffy and stuffy until she melts, and then spends her time weeping, wailing and suffering. The film rests firmly on Aamir’s shoulders, and he is the one who finally evokes the emotions for which the film has been angling. Not only is his charm is undeniable, but his tear filled eyes and suppressed passions are deeply affecting; Aamir makes Mann worth watching.

The film is a startlingly faithful homage to An Affair to Remember, directed by Leo McCarey in 1957, a remake of his own Love Affair (1939) which starred Irene Dunne and Charles Boyer. Settings, plot points, dialogue and sometimes even camera angles from the fifties version are faithfully matched to its predecessor. Cary Grant (Nicky) and Deborah Kerr (Terry) are also plagued by celebrity hungry journalists and nosey passengers, there is religious devotion at Grandmother’s shrine, and a memento that will eventually reunite the lovers. There is a surprising amount of singing in the Hollywood version, as well. One important scene in both films is Grandma/Daddi Ma at the piano with Terry/Priya singing along. Terry, unbelieveably, is supposed to be a nightclub singer, surely the most prim chanteuse in history. She seems much more suited to teach music to the legion of sugary moppets that is the heroine’s occupation in both films.

Viewing An Affair to Remember after many years, I am struck how it burns with a cool flame. Grant and Kerr underplay, suitable for such mature lovers, who view this liason as their last chance for happiness. Grant is an aging playboy, 53 when the film was made. Rather than the lonely spinster of a film like Now Voyager, Terry is clearly a discreet kept woman, swathed in gowns of pale chiffon suitable for the older mistress. My aversion to this film in my younger days must have been because it was a romance for old people. A prime example of female romantic masochism, it has never held the appeal for me that it has for generations of female fans, like Meg Ryan and Rosie O’Donnell who moon over it in Sleepless in Seattle. Nicky and Terry are kept apart by a lie, so both halves of the couple are punished, one knowingly and one unknowingly. What is so romantic about that?

Mann’s most radical reimagining is to make this a film about young lovers, not rueful, but filled with fiery passion. The extended length of Mann also allows for leisurely character development, as you can see Dev’s transformation as he renounces his flirtations and devote himself to his new love. Critics of An Affair to Remember faulted the speed at which Nicky and Terry doff their former partners after a week of shipboard romance. Mann has the running time to create a more logical character progression, even if the melodrama style differs and the painfully shrill comic characters are a distraction. The incident which separates the couple is more extreme in Mann, as well. An Affair…hints at a happier ending clearly not possible in Mann. Yet, it’s not difficult to choose Mann’s romantic fantasy, however flawed over the dreary An Affair to Remember. 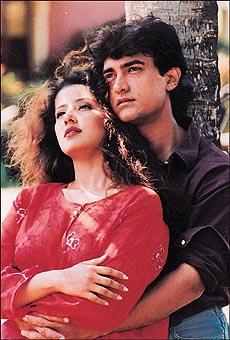 Akele Hum Akele Tum is a Hindi version of the hit American film, Kramer vs. Kramer, in which married couple Dustin Hoffman and Meryl Streep separate and squabble over their son, played by Justin Henry. KvsK is clearly a product of the Second Wave of feminism; the phrase “woman’s lib” is used with contempt. The 1970s in the US was a time when men and women were reevaluating their traditional roles. Women were impatient with the idea that men were supposed to be providers alone, excusing them from domestic responsibilities. They also felt there was more to life than keeping house and raising children while sublimating all creative ambitions. Men had a lot of anger at women who demanded more from married life than their mothers had. One result, unimagined amidst the bitterness of change, but hinted at by KvsK was that the next generation of fathers would be rewarded by closer and more fulfilling relationships with their children than their fathers ever imagined.

KvsK starts with a tearful mother deserting her child, a scene that does not occur for 40 minutes in AHAT. The Hindi version begins with the love of two young people sharing the same goals in life, to be successful singers in the film business. They pledge to follow their paths together. The heroine is quite shocked to discover, after marriage, that rather than being an equal partner, she will be cooking and cleaning in support of her husband’s aspirations. You see her lose her temper with her child, and feel her confinement within the definition of marriage, scenes described in dialogue, but not shown in the American film. When she leaves, you clearly see her side of the story. 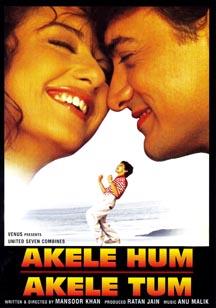 Aamir reproduces the scenes in which Dustin Hoffman gets to know his son, and they forge a relationship together. It’s most interesting to see a different actor interpret this character in his own way. Although Aamir and Dustin play the father differently, in a way they are similar actors, able to engage the audience both as they turn on the charm as well as venting anger and frustration. Although exaggerated performances are considered the provenance of Hindi films, here it is Aamir who underplays, while Dustin screams and swears and throws glassware. Manisha is more convincing here than in Mann, perhaps because her character is a more realistic one.

Economics are not an issue in the American version, where the yuppie couple have a nice apartment and plenty of money. Hoffman loses his job, but the situation doesn’t seem as desperate as in AHAT, where Aamir almost commits a crime for want of cash. Hoffman doesn’t have a community that supports them, and his son feel more isolated. Aamir and his son have the sociability of the street. Aamir drinks a little as a balm for his pain, but Hoffman brings home a work colleague for a bit of extramarital sex.

KvsK was seen at the time as a diatribe against the liberated woman, perhaps spurred by an experience in the life of the writer/director, Robert Benton. Meryl Streep’s character was viewed a monster of self absorption. She is shown watching her child secretly, not in a benevolent way, as in AHAT, but hovering behind a window across from her son’s school like a predatory bird. In retrospect, when Meryl Street goes on the witness stand to testify that her husband insisted that she quit her job, even before they had a child, the modern viewer is shocked, so much have views of working women changed in a generation in this country. The fleeting expressions on Hoffman’s face demonstrate how he has matured, and how astonished he is that his wife was capable of career success on her own. As in Mann, the extra hour in AHAT presents more complex character development allowing the audience to appreciate both sides of the story. The conclusion valorizes the family unit in a way the American film cannot endorse. Of course, the Hindi version is partially a reproach of love marriage, an unthinkable subject for a Hollywood film. Unlike Mann and An Affair to Remember, which have similar endings, KvsK and AHAT have completely different solutions for healing the family, and by implication, society.