The clothing of a robot in human flesh provides as great a thrill as anyone could wish. –(Iris Barry).

Inspired by the skyline of 1920s Manhattan, Lang created a throbbing, dystopian uber-city of the year 2000, where a decadent aristocracy thrives on the sweat of laboring hoards underground. Stanley Kubrick’s masterpiece 2001 was set the year after Lang’s Metropolis as a respectful homage. Filtered through both German Expressionism and Christian symbolism, this dark fairy tale pits man against machine, and the head against the heart. Brigitte Helm plays the good Human Maria and the bad Robot Maria, created in an unforgettable, iconic scene. The imagery set a precedent for all future SF films, “Metropolis fills the imagination.” (Roger Ebert).

Lang said his initial inspiration was a forced sojourn in New York Harbor in 1924, on the S.S. Deutschland, where he and producer Erich Pommer were confined on board as enemy aliens. He “saw a street as if in full daylight lit by neon lights and topping them, oversized, luminous advertisements, moving, turning, flashing on and off, spiralingsomething which was completely new and nearly fairy-tale like for a European of those days and this impression gave me the first thought of an idea of a town of the futurehuman forces were driven to exploit each other and thus living in perpetual anxiety…the buildings seemed to be a vertical veil, shimmering almost weightless, a luxurious cloth hung from the dark sky to dazzle, distract and hypnotize. At night the city did not give the impression of being alive, it lived as illusions lived. I knew then that I had to make a film about all these sensations.” Lang apparently told variations of this story in numerous interviews, although Patrick McGilligan in Fritz Lang: Nature of the Beast, and Thomas Elsaesser in his BFI monograph on Metropolis, say the genesis of the film script actually occurred months before.

Erich Pommer headed UFA, the federation of German film studios. Paul Rotha described him as the “real genius behind the great years of the German cinema.” He welcomed Lang’s imaginative epic of the future and authorized 310 shooting days and 60 nights, 26,000 male extras, 11,000 female and 750 children, multiplied by optical tricks all done in the camera by the brilliant cinematographer Karl Freund. Metropolis also pioneered the “Schufftan Process” a revolutionary method of combining live action and miniatures and had the largest budget ever for a European production. Unemployment and inflation were so terrible in Germany that it wasn’t too hard to find 500 malnourished children to film the flooding of the underground city or hundreds men willing to march near naked into the steaming mouth of Moloch. Lang treated his armies of extras like the enslaved workers they portrayed. But, a writer going undercover as an extra was paid three times more for his extra work than he would be for his article. 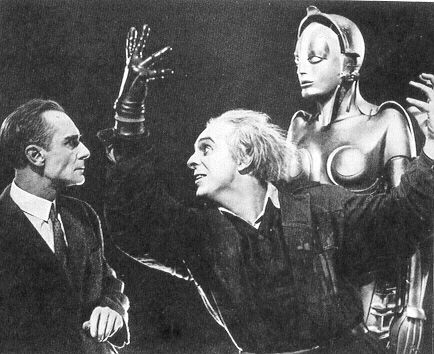 The mood-setting shots of the great city took months to create and days to shoot, even though they last but briefly on screen. Lang and his designers strove for a visual synthesis of all the modernist schools, Dada and Surrealist, Bauhaus and Expressionist; as Elsaesser says, an “alphabet soup of the avant-garde.” Modernists were equally repelled and attracted by emerging technologies; remember the Italian Futurist Manifesto affirmed that “a roaring motorcar is as beautiful as the Victory of Samothrace.” McGilligan quotes Heide Schonemann, “The beauty and the horror of the machine world excited many artists.” . Metropolis, of course, deals with the same theme as many SF movies, from Invasion of the Body Snatchers, to Blade Runner to A.I.: In an increasingly technological world, what does it mean to be human?

Metropolis can also be seen as an alphabet soup of ideologies. Interpretations of the film has shifted through allegories of Fascism, Communism, Christianity, Freud and fable, and Maria has evolved from virgin-whore archetype to feminist powerhouse. Parker Tyler says, Lang’s film was “a frank fabulizing of economic unrest, the unrest even then seething below the surface in Germany.” The downtrodden masses in the city of Metropolis turn quickly to violence, a seemingly prophetic vision. Thomas Elsaesser quotes Georges Sadoul on perhaps one of the most potent 20th century interpretations. He told the story of a man arriving at the Mauthausen concentration camp in 1943. “As he ascends the ramp, seeing all these men and women in uniform and shaven heads, he is heard saying to his fellow prisoner: ‘Do you know Metropolis?'”

Completed, it was close to 3 hours long. American playwright Channing Pollock supervised the cutting from 16 reels to 7, resulting in a plot with “more holes than a pound of rigatoni.” (Cesar J. Rotondi). Most damaging were deleted references to Freder’s dead mother Hel, who died giving birth to him. She strongly resembled Maria and had been loved by both Rotwang and Jon Frederson. Pollock firmly defended his editing. “As it stood when I began my job of structural editing, Metropolis had no restraint or logic. It was symbolism run such riot that people who saw it couldn’t tell what the picture was all about. I have given it meaning.” 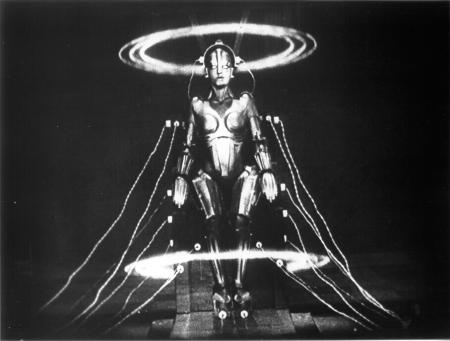 The creation of the Robot Maria

Lang wrote the script with his wife and frequent collaborator, Thea von Harbou, who had previously married and divorced Rudolph Klien-Rogge (Rotwang). She worked on both the novel and screenplay simultaneously, although they do not closely resemble one another. Lang continued to direct in Germany, discovering Peter Lorre and casting him in M. Shortly after Hitler assumed power in 1933, Lang left Germany. He said he was summoned to see the Nazi Minister of Propaganda, Josef Goebbels, who had banned what would be Lang’s last German film, Das Testament des Dr. Mabuse. The Fuhrer “loved” Metropolis, he was told, saying, “Here is a man who can give us great Nazi films!” Lang realized with some nervousness the gravity of his situation when Goebbels offered to make him an honorary Aryan in spite of his Jewish mother. “Mr. Lang, we decide who is Jewish and who is not.” He left for Paris that night, but von Harbou, from whom he had been estranged for some time, stayed and divorced him. Lang told this story many times, but its validity is questioned by McGilligan in his excellent biography. When the legend becomes fact, print the legend?

Lang liked “virgin actors” for important roles, perhaps because so few were willing to work under his tyrannical methods more than once. Freder is played by Gustav Frohlich, von Harbou’s discovery, but he isn’t much of an actor. Even contemporary critics dismissed his acting as overdone. Seventeen-year old Brigitte Helm gives a more felicitious performance. Brutalized by Lang in an excruciating wooden and plaster robot suit, nearly drowned , sparked on fire during the burning of the stake scene and rehearsed until “‘bis sum Weissbluten” (until she is bled white) Helm later said, “Metropolis was the worst experience I ever had.” The result is one of the great performances in all silent film. 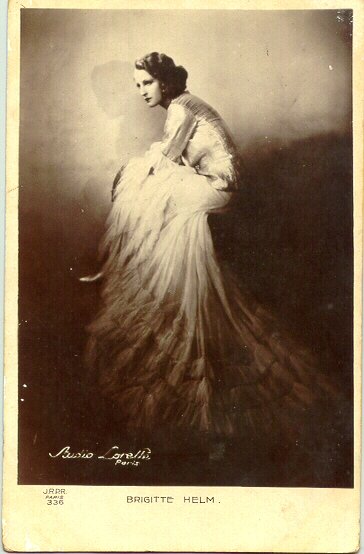 An original symphonic score was composed by Gottfried Huppertz, who conducted it at the premiere. “Subsequently published as a piano score for regional and smaller cinema venues, it keeps a judicious balance between tonal pieces, in the manner of late Romantic music, or transpositions of well-known melodies (including the ‘Marseillaise’, when the workers are destroying the machines) and a-tonal passages to indicate the modern rhythms of the city” (Elsaesser). A set of 78 records of the music, with a spoken introduction by the director was also issued, although only one is known to survive. Kino International has recently released the most complete version to date, with this original orchestral score performed anew.

Many audiences were introduced to Metropolis by a beautifully tinted and carefully restored version financed by Giorgio Moroder in 1984 to display his own pop score, which featured “the Robot Maria lasciviously stripping to a disco beat.” (Elsaesser) Morodor’s titles updated the film to 2026, 100 years after it was made, since Y2K was fast approaching! At the time, silent film was often shown (incorrectly) in silence, as passionate devotees like Henri Langlois at the Cinematheque Francais demanded. But, it’s hard to imagine anything less appropriate than a 1920s masterpiece underscored with songs by Queen and Pat Benetar. I still cringe at the memory, but Moroder’s version did bring a new, younger audience to the film.

The Alloy Orchestra accompanied the screening at the North Carolina Museum of Art. Elliot Wilhelm described their score as “rousing, witty and respectful–everything Moroder’s is not.” This is a vast understatement. Working with Moroder’s beautifully restored print, Alloy has created one of the great experiences in this era of reestablishing silent film as the cutting edge multimedia performance art it was meant to be. The infectious themes and imaginative instrumentation using their “rack of junk” create unforgettable moments, such as the metal Robot Maria creaking as she approaches her creator. Almost 300 people packed the tiny museum auditorium, watching with delighted intensity, laughing with relief at the end titles (having escaped hearing Freddy Mercury, Adam Ant and Loverboy) and leaping up to give Alloy a magnificently well deserved standing ovation. Play it again! 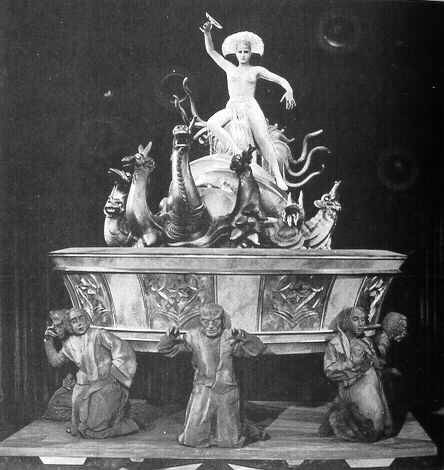 (Sources include the McGilligan and Elsaesser books mentioned, a review of Moroder’s reissue in the October, 1984 Films in Review, Parker Tyler’s Classics of the Foreign Film, the old Janus distributor’s catalogue, Videohound’s World Cinema edited by Elliot Wilhelm and The Films of Fritz Lang by Frederick W. Ott (1979) which also supplied the photo of Rotwang as Dr. Strangelove. Photos of the Robot Maria from Jerry Ohlinger’s Movie Materials. Postcard photo of Brigitte Helm from Moviediva’s collection.)

Kino International just released a definitive version of Metropolis, with the original orchestral score, on video and DVD. Contact them at www.kino.com.