Stanwyck lets ‘er rip against the pious hypocrites of her father’s church and decides to get famous, get rich and get even. As a big-time evangelist, she can “pull nifties out of the Bible like raisins” but has her own faith challenged by a hunky, blind ex-aviator. Capra said of her in 1931, “Miss Stanwyck is a natural actress. A primitive emotional. I let her play herself, no one else.”

The 1920s were rich with religious charlatans. The melange of WWI disillusionment and Jazz Age excesses produced a fertile field. There was Emile Coue, author of Self Mastery Through Conscious Auto-Suggestion; his mantra, “Every day in every way I’m getting better and better.” Father Divine spread the Word through Harlem with his Peace Mission, which preached communal living and interracial harmony. Colorful Fundamentalist and ex-Chicago White Sox player Billy Sunday thumped his Bible to overflow crowds, denouncing booze, science and liberals.

But, best of all was Sister Aimee McPherson and her Four Square Gospel. Sister Aimee dressed like an angel and in Los Angeles her Angelus Temple held thousands of the faithful. Those who could not attend in person listened on the radio. “In her famous throw-out-the-lifeline number, the former Ontario farm girl had a dozen imperiled maidens cling to a storm-lashed Rock of Ages while special effects men worked heroically with thunder, lightning and wind machines. Just when all seemed lost, Sister Aimee in an admiral’s uniform appeared and ordered a squad of lady sailors to the rescue.” (Axel Madsen). The words to the hymns were projected on a screen for ease of singing along with the choir, band and pipe organ. A tank of water on stage allowed up to 150 of the faithful to be baptized each night and those who were cured of their afflictions could leave their crutches in the “miracle room.” Sister Aimee mysteriously disappeared in 1927was it suicide? drowning? She reappeared and claimed to have been kidnapped, but her disappearance was revealed to have been a ruse for a sinful interlude with her radio station’s operator. The Four Square Gospel empire was no more. 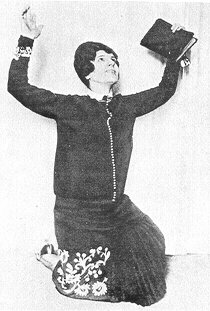 Sinclair Lewis’ debunking novel Elmer Gantry was published in 1927, and cynicism regarding religious hucksterism was in the air. Coincidentally, Robert Riskin and John Meehan were both reading Elmer Gantry while collaborating on a play in New York, and had wandered into evangelist Uldine Utley’s tent and heard her preach. The result of their inspiration, Bless You, Sister opened on Broadway that year starring Alice Brady and ran for a scant 24 performances. Riskin would soon become Capra’s most important creative partner, writing the scripts for nearly all of Capra’s classic films.

After Rain or Shine, with vaudevillian Joe Cook and another Jack Holt-Ralph Graves adventure picture, Dirigible, Frank Capra turned his attention back to his discovery, Barbara Stanwyck. Riskin arrived in Hollywood to adapt his play Bless Me, Sister. Will Hays and the Production Code had specifically banned Elmer Gantry from being adapted for the screen, but a less well known source on the same subject might slip by the censors. The title The Miracle Woman intentionally evoked The Miracle Man, a Lon Chaney film of 1919 in which he played a fake cripple who is a shill for faith healer.

At the initial story conference, Columbia production chief Harry Cohn asked Capra to tell the story and then asked Riskin for suggestions. At the conclusion of Capra’s recitation, Riskin announced, “I wrote that play. My brother and I were stupid enough to produce it on Broadway. It cost us almost every cent we had. If you intend to make a picture of it, it proves only one thing: You’re even more stupid than we were.” Riskin said he had no interest in writing the script for a flop, (he felt the story was too controversial for public taste) but such honesty was unusual in Hollywood (then and now) his audience was riveted. (Patrick McGilligan, editing a volume of Riskin’s Capra scripts considers this story too good to be true!) The script would add a con man who manipulates Sister Florence Fallon’s genuine faith into fraud, so that she could remain relatively pure, and a romance. Riskin co-wrote the script with Jo Swerling (who had done the first Capra-Stanwyck film, Ladies of Lesiure) and Dorothy Howell, who co-scripted several of Capra’s early Columbia pictures. 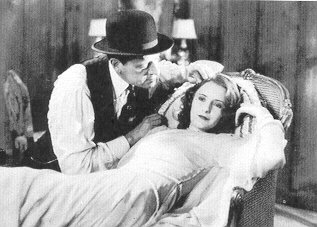 Stanwyck’s odd beauty, her Brooklyn accent, her vulnerability and her grit set her far above the run-of-the mill starlet. Her righteous fury in the opening scenes is balanced by the glowing firelit love scenes with David Manners. The superb photography is by Joseph Walker, Capra’s long time collaborator. Refreshingly, Manners does not play his blind character mawkishly. He usually played a refined hero, cast so as not to overshadow a more flamboyant leading lady. He’s most often seen today in Lugosi’s Dracula and Karloff’s The Mummy, where he must save the heroine from unspeakable horrorsa fate worse than undeath, perhaps. Manners made 37 films from 1930-36, then retired from the screen to run a guest ranch in Arizona and to write. His professed reason was a desire to protect his privacy. It doesn’t take too much reading between the lines to deduce he was gay (confirmed in William J. Mann’s new book). Manners died only a couple of years ago at 98, never having resumed his screen career. 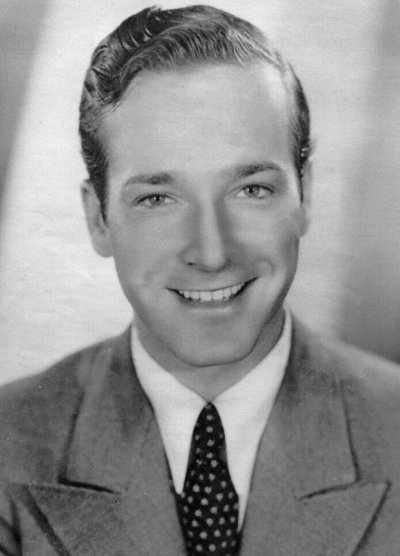 “It may be that this photograph is on Doris Warner’s dressing table. Anyhow, Doris, who is the pretty daughter of the president of Warner Brothers, and David, who is related to Lady Diana Manners Cooper are happy about something. Perhaps, it is Dave’s new picture, The Ruling Voice.” NB: Manners was born Rauf de Ryther Daun Acklom in Halifax Nova Scotia, but Manners was his his mother’s maiden name, she was Lady Diana Manners second cousin.)

In a 1977 interview, Manners said of Capra, “He’s my favorite director. He understood actors and he had a way of working with them that was just wonderful.” Stanwyck was the undisputed star, and Manners felt some of his best scenes ended up on the cutting room floor for this reason, but there were no hard feelings. “Not too long ago I attended a Writers Guild Dinner and Barbara was there. She was at another table–she looked just beautiful–and I so wanted to go up and talk with her. But I thought, no–she won’t remember me. Finally, I got up my courage and timidly walked up behind her. Just then she turned around, took one look, and cried ‘David!’ and threw her arms around me. Well, I just cried. She’s 100%.” 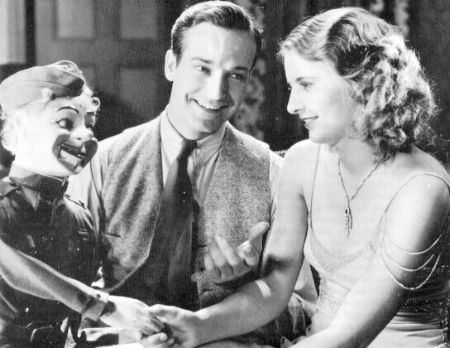 Shy David Manners lets his dummy speak for him in the dopiest part of the film.

As Robert Riskin predicted, The Miracle Woman was a flop when it was released. Yet, the corruptibility of hugely successful evangelists is still a hot topic. Capra felt the picture failed because of Sister Florence’s ambiguous morality. Does she or doesn’t she believe? How guilty is she of fraud? Yet, these subtleties make this expose of the sin racket as relevant now as in 1931.

(Photo of Stanwyck and Manners from December, 1963 Films in Review. David Manners portrait and caption from December, 1931 The New Movie Magazine. Picture of Sister Aimee from The Twenties, by Alan Jenkins. Sources include, Stanwyck, by Axel Masden, Frank Capra, The Catastrophe of Success by Joseph McBride, The Twenties by Alan Jenkins, December, 1977 Films in Review David Manners career article by Gregory Mank, Behind the Screen by William J. Mann. For more on Frank Capra, go to The Matinee Idol.