Quirky M. Hulot clashes with the impersonal, ultra modern push-button world in his funniest film, the tale of a small boy who prefers his eccentric uncle to his efficiency obsessed parents. Tati’s films are precise ballets of music, sound effects and sight gags, his heart placed squarely with the world’s scruffy stray dogs.

“ Maybe our own time is too informal for great comedy; Tati was one of the last, lucky artists to operate on the Wildean principle that anarchy is best practiced within the confines of codified behavior.”—Anthony Lane.

Jacques Tati wrote, directed and starred in only 5 feature films between 1948 and 1974, and in all but the first he plays the character, M. Hulot. Hulot isn’t an unusual name in France, and Tati may have borrowed it from an architect he knew with a peculiar walk. But, “Hulot” strongly echoes “Charlot,” Charlie Chaplin’s French nickname. Tati owes debts to both Chaplin, for his pantomime skill and use of sound effects, and Buster Keaton for his wide-angle shots, and the comedic clash between technology and the individual.

Jacques Tati’s grandfather was the Dutch frame-maker who built Van Gogh’s frames, and Tati was expected to enter the family trade. Perhaps viewing the world through a frame contributed to the precise geography of his later filmmaking. He was an athlete, particularly in rugby football, and seemed to enjoy reinacting the match in the locker room as much as the game itself. This led to a routine, “Sporting Impressions” in which he satirized a variety of sports, which he moved from the locker room to the music hall stage. This delight in physical comedy would remain with him throughout his career.

Much to his parents’ disgust, he became a mime and then began to get bit parts in movies. He longed to record his own comic routines and made a two reel comedy, Ecole des Facteurs, about François, a rural postman. François’ adventures were expanded into a feature, Jour de Fete, in which he becomes obsessed with American efficiency and is determined to apply the methods (unsuccessfully) to his bicycle delivery route. The film was printed in an idiosyncratic black and white process, with selected objects in certain scenes hand colored.

Jour de Fete‘s enthusiastic reception led to M. Hulot’s Holiday, the second of Tati’s “films de copains” made with his friends on a low budget. After the international success of M. Hulot’s Holiday, Tati had to resist the temptation to send M. Hulot on a series of holidays, some offers even arriving from Hollywood. But, Tati would remain true to his own vision.

After WW II, widespread bombings throughout Europe resulted in a housing crisis. Old sections of many cities were decimated, and quirky older style housing replaced with impersonal apartment blocks. In Mon Oncle, Tati contrasted idiosyncratic old Paris with the shock of the new. The chilly International Style still evokes “modernity.” Although the house was a set, at least one person who saw the film admired the house so much, it was actually constructed—and supposedly still stands—in a suburb of Paris.

For a film that was an appreciation of the pleasures and virtues of idleness vs. efficiency, it involved an enormous amount of work. None of the gadgets that were devised for the film existed, so off screen hands operating push button magic of the Arpel house. The fish fountain that supplies much humor was a nightmare to construct and operate. Water does not photograph unless it is colored in some manner, so tinting had to be adjusted. The gurgling noise was built in, and the pipes sprung leaks everywhere. The fountain seemed loathe to run properly when the camera was turning. Tati always had infinite patience with small details. He wanted a particular kind of dog, walking with its tail erect to set off the garage’s electric eye, but refused to change the level of the beam or the size of the dog to make the gag easier. He would wait until it was perfect.

His pack of dogs came from the pound, and after the shoot he advertised in the newspaper for homes that would adopt dogs that were soon to be film stars. Of course, they were all placed quickly.

There is little dialogue, since sound as a substitute for speech fascinated Tati, and even when people speak, it is sometimes in gibberish. There is a sound landscape, as well as a visual one, too. The sets emphasize the contrast between the sterile home of the Arpels and the bohemian one of M Hulot. Tati had a distaste for cleanliness, believing a certain amount of disarray is a more natural human condition. “Keenly aware that modernization eliminated some cherished virtues—solitude, contemplation and a sense of conncetion—Tati’s comedies show us how technological changes dismantled the old idea of community.” Matt Zoller Seitz

Hulot’s eccentric clothes, odd gait and gawky height set him apart from everyone, but Tati is careful to stress Hulot’s ordinariness. “Hulot is not a doer,” says Tati. “He is perhaps more childish. He does not dare. He is not necessarily funny to everybody. Some spectators do not laugh at him.” He might have added that Hulot seems to have no interior life, no family, no wife or children and while we see where he lives in Mon Oncle, it is only from the outside.

Tati made an English language version of the film, realizing that his international fame, and international box office success, depended on an audience loathe to read subtitles. Some the film was shot twice, not just with the dialogue changed (in post-production) but the street signs as well. But, different takes were used, and other editing changes made, shortening the film by 10 minutes. This version was much less successful creatively than the original French one, although it did secure his dream, an Academy Award for Best Foreign Film. Invited to the US for two weeks in 1959, the red carpet was rolled out for him, and he was offered anything the Academy could provide. All he desired was to meet the silent film pioneers he admired, Buster Keaton, Stan Laurel, Harold Lloyd and Mack Sennett. Puzzled by his interest in figures they considered to be has-beens, the meetings and photo opportunities were dutifully arranged.

Mon Oncle was his first film in color, and color is used in an intentioned way, for effect as well as humor. It is also Tati’s only film with the bare bones of a plot. He holds the modern world up to the camera’s eye, but not with alarm. “Tati was not out to change the world, but to help us look at it with less horror”—David Bellos. Jean-Luc Godard, who looked on the world with a sense of unremitting horror, was an admirer of Tati’s comic observation. “He sees problems where there are none, and finds them.”—David Bellos. Tati said he “hardly read anything” and with a dearth of dialogue, his films hardly seem scripted. “Not since the perfecting of silent cinema had anyone nudged us so nearly toward the essential conundrum of comedy: do we make things happen, or do they happen to us?” –Anthony Lane

Mon Oncle won a Grand Jury Prize at Cannes, and an Oscar, but the film has a leisurely pace that some people find maddening. Francois Truffaut was a great admirer of Tati’s confined and controlled film making techniques, how he shot until he got it right, regardless of time and money like another meticulous filmmaker, Robert Bresson. But Truffaut was frustrated by this film, “In the end, he creates a mad, nightmarish, overly concentrated universe which paralyzes laughter rather than engendering it.” Many people find his rather measured, chilly view of comedy unfunny, or impenetrable. I have rarely heard such heated complaints from an North Carolina Museum of Art audience as I did about what they considered to be the baffling unfunnyness of Playtime. Mon Oncle, however, was received with welcome gales of laughter.

“Tati was a career funnyman; whether he himself was a funny man is a moot point, but, once the cameras rolled his dedication to the gag became that of the unappeasable, almost humorless purist.” –Anthony Lane. 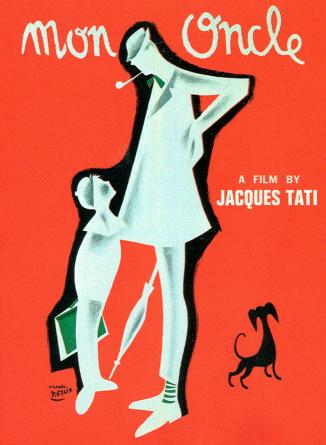