Morocco‘s director, Josef von Sternberg, sometimes described as the foremost visual stylist of the American cinema, was born in Vienna but lived in the US on and off as a child. His birth name was Jonas Sternberg, as a high school student in the States he’d been plain Joe Stern. In Hollywood, he styled himself von Sternberg. He’d made a number of successful silent films in the US, one of them, The Last Command, won the very first Best Actor Oscar for Emil Jannings, the great German star. But, as the talkies loomed, foreign-born stars with poor English, even Oscar winning ones, were persona non grata, so Jannings returned to Germany. He was promptly signed by the big German studio UFA to star in Germany’s first talkie, Professor Unrat, based on a novel by Heinrich Mann. UFA’s executives had misunderstood which novel was being proposed, confusing Heinrich Mann with his brother, Thomas, who had just won the Nobel Prize for Literature. Heinrich’s book was gamier than anything Thomas wrote, and UFA began to get cold feet almost immediately. But, Jannings had already sent for the director who had won him his Oscar, Josef von Sternberg.

Marlene Dietrich had been in 17 silent films, and was both in revues and plays in decadent 1920s Berlin. She was considered a bit over the hill to be a new discovery. Her screen test, in which she sang “You’re the Cream in My Coffee” (her favorite song at the time) berated her accompanist and launched into a more sultry song in German was considered unpromising. Jannings said Von Sternberg would rue the day he signed Dietrich, but it was Jannings who would soon do so, as he realized the magnetic, carnal Lola-Lola, as impersonated by Dietrich filtered through the erotic fantasies of her mentor, was stealing the picture from him. Professor Unrat, retitled The Blue Angel, was made in both English and German, and Paramount executives were beside themselves at the chance to sign an “English-speaking German sex bomb.” Thomas Doughtery writes in Pre-Code Hollywood, “Garbo’s remote and regal beauty, a beauty that never seemed to give her pleasure, contrasted with the whiff of Weimar decadence that always swirled about Dietrich. Where Garbo wanted to be alone, Dietrich was open to suggestions.” Paramount even allowed her an unheard of provision in her contract that allowed her to choose her own director. The Blue Angel would not be shown in the US until Paramount could introduce their new star in their own way.

Gary Cooper was born in Montana (although he’d spent part of his childhood in England) and ended up in Hollywood after two years of college because his parents moved there after his father retired as a judge from the Montana State Supreme Court. Cooper made more money as an extra riding a horse in cowboy movies than he could in his chosen career as an artist. A combination of looks, grace and helpful love affairs helped him out of the extra ranks. A romance with Clara Bow landed him a small part in It, and in her film Children of Divorce he was coached by assistant director Josef von Sternberg. A couple of supporting parts in big budget pictures, The Winning of Barbara Worth and Wings, led him to romantic leads. In The Virginian, his first talkie, Walter Huston called him a “Son of a” and Cooper drawled, “When you call me that, SMILE.” 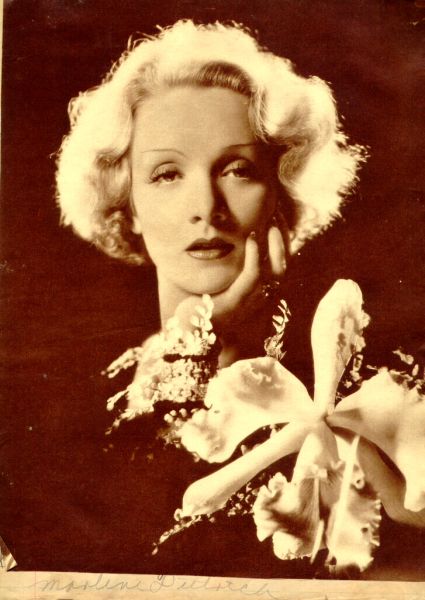 Hundreds of extravagantly glamorous still photos of Dietrich were circulated before a single frame of Morocco was shot. Amy Jolly, Woman of Marrakesh was a novel written by a Berlin journalist, Benno Vignay, perhaps based on his own Foreign Legion experiences. Sternberg found the story appealing because of the success of the Legionaire film Beau Geste a few years before. Amy Jolly, a corruption of “pretty friend “(aimee jolie) in French; was, in the book, a cabaret singer, prostitute and drug addict. Dietrich said she was shocked that Von Sternberg would consider starring her in the racy book she’d given him as a diversion on their trans-Atlantic crossing. But Paramount had already purchased the screen rights and had the script ready for her when she arrived. 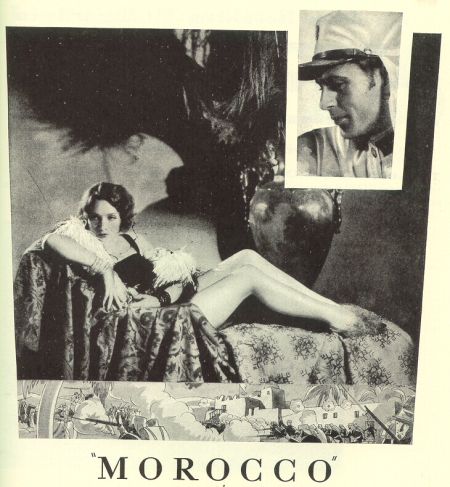 Reckless soldier of fortune, Gary Cooper. Adolphe Menjou, sophisticate, man of the world. A flaming cafe beauty, Marlene Dietrich…mysterious, dangerous as the Sahara. “Morocco” the turbulent story of these three. In “Morocco” Paramount presents the continental star, Marlene Dietrich, whose ravishing beauty and exotic personality will electrify all who come under her spell. A not-to-be-missed Paramount Picture, “best show in town.”

Swathed in the exotic wardrobe provided by Travis Banton, in what was to be one of the great collaborations between designer and star in the history of the movies, and lit by cinematographer Lee Garmes to create an otherworldly beauty, Dietrich makes an entrance of unparalleled star mystique. The director thought Cooper “harmless enough not to injure the film” although his masculinity keeps Dietrich’s sexual ambiguity in line. The tuxedo she wears was made by her husband’s tailor in Germany; cross dressing for both sexes was relatively accepted in the Berlin she inhabited, and she professed surprise that Americans responded with such shock to the sight of her in a dress suit. Two good luck talismans that traveled with her throughout her career, a black doll she called her Savage, and a Japanese doll, are prominently displayed throughout the film, perhaps to bolster Dietrich’s confidence in her new American career. 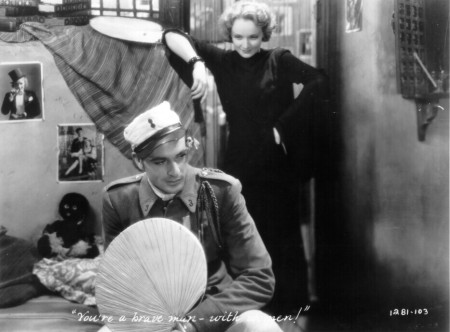 Cooper became quite aggravated at Von Sternberg’s attention to his protégée on the set. They spoke German together, when Cooper knew perfectly well that the director was fluent in English. A story repeated in most of the books I read is that one day, fed up, Cooper grabbed Von Sternberg by his coat, shaking him and threatening him over his refusal to speak English, an uncharacteristic display of temperament for Cooper, resulting in an uncharacteristic capitulation by Von Sternberg. You may read what you want into this, as far as what you see on the screen. Each author has his/her own interpretation. As far as Von Sternberg was concerned, the Cooper character didn’t matter anyway. He was far more interested in his alter-ego played by Adolph Menjou. “I appear by proxy,” he said. 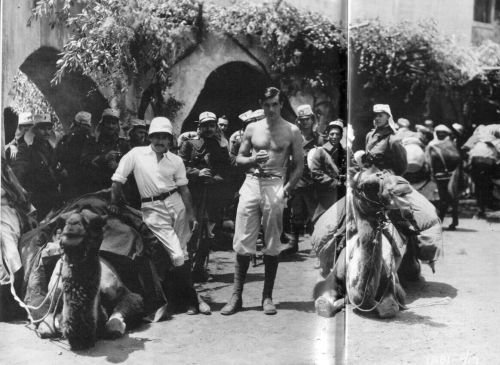 Morocco hasn’t got much of a plot, and the pace is rather slow. It’s all about the cinematic pleasures of looking at von Sternberg’s orientalist fantasy decor, and the beautiful faces of the stars. Both Dietrich and Cooper are so young, and still unsure of their iconic power on the screen. They have a tenderness and vulnerability here that would evaporate as their confidence (and success) grew. Morocco was nominated for 4 Oscars, but won only for sound. It made $2 million for Paramount in a dark Depression year, and was an international hit. This is the first and last time Marlene Dietrich was nominated for an Oscar, (Academy Awards are almost always wrong, in my opinion) although I cannot begrudge Marie Dressler’s win for Min and Bill. Film historians also differ on whether von Sternberg and Dietrich were lovers in real life. I say: Ars longus, vita brevis (Latin correction appreciated). Life is short; art endures. His lust is immortalized on screen, does the rest matter any more?

Late in life, von Sternberg said to Peter Bogdanovich, “I am Miss Dietrich–Miss Dietrich is me.” When Bogdanovich asked her if she found the remark disturbing, she replied, “No–because it was true.”

A letter to the October, 1931 The New Movie Magazine from the (presumed) future editor of Famous Monsters of Filmland.