A small town Vermonter who writes cornball poetry and chases fire engines comes into $20 million and ponders what a rich man ought to do in the Depression. Dreamy Deeds seems to care more for his tuba than slightly corrupt newshound Babe Bennett, but sanity will prevail. “If Mr. Deeds seems Capra’s best film, perhaps it is also because it is the only one with both Gary Cooper and Jean Arthur.” (Gerald Mast)

After the staggering success of It Happened One Night, Capra found himself a bit overwhelmed, or as Elizabeth Kendall puts it, “like a sleepwalker who wakes up on the high wire, Capra realized that he was FRANK CAPRA, the savior of the movie industry and the voice of the little man.” His next film was a minor one, Broadway Bill, a racetrack drama with an unhappy ending. He toyed with the idea of filming Maxwell Anderson’s play, Valley Forge, but then he and screenwriter Robert Riskin were sidetracked by “Opera Hat” a magazine serial by Clarence Buddington Kelland. It seemed to hold the same potential for a beguiling cross-class romance, a reverse on It Happened One Night, with similar populist overtones.

Kelland was most famous for his Scattergood Baines stories, about a rural New Englander who outsmarts the city boys. He also wrote Stephen Howland stories, about a small town banker trying to keep solvent during the Depression, not unlike the banker in Capra’s American Madness. In “Opera Hat” Longfellow Deeds inherits an opera company and solves a backstage murder mystery. Capra and Riskin restructured the plot, carrying over far fewer incidents than they had with It Happened One Night. Riskin thought the inheritance the most interesting part of the plot, “which evolved into a symbol of economic disparity, while Deeds was fleshed out, made colorful and sympathetic–at once a rube and almost a saint–and his idiosyncratic behavior given logic and motivationThe screenwriter, who believed in Deeds, made him as true and vivid and unforgettable a figure as has ever been put on film.” (McGilligan). The heroine of the story had been an opera star’s “pallidly sweet” secretary. Capra and Riskin made her, like IHON‘s Peter Warne, a hard-boiled reporter, and added both the social conscience and the courtroom scenes. Kelland, a prominent conservative, disliked how his story had been adapted for the screen, and refused to let the script be published during his lifetime. But, Mr. Deeds was screenwriter Robert Riskin’s favorite film.

Gary Cooper had often played a rugged hero, and could play a gentle fellow without appearing too wimpy. He is apparently not only the most eccentric person in New York, but the tallest, as well. Richard Schickel considered him “the only truly beautiful actor who did not spoil the effect of his handsomeness by seeming vain or self absorbed.” Or, as Otis Ferguson said, “the girls will want to muss his hair.” Longfellow Deeds was a turning point for Cooper, the place where he started to leave his early sexy roles, progressing towards iconic heroes, the likes of Lou Gehrig and Sgt. York. Cooper said about the part, it’s “just about the easiest acting I ever didsome roles that didn’t turn out nearly as well were certainly harder.” Graham Greene said, “Cooper’s subtle and pliable performance must be something of which other directors have only dreamed.” 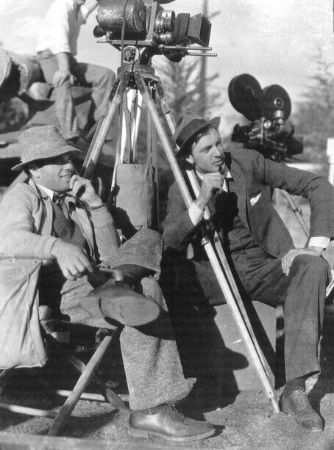 Capra and Cooper on the set of Mr. Deeds

Jean Arthur had knocked around in bits and small parts in Hollywood since 1923. Fired from Paramount at the beginning of the Depression with Fay Wray (soon to be Robert Riskin’s wife) and Louise Brooks, she returned to New York, her home town, and the theater. She’d just come back to Hollywood, where she had had one good role, opposite Edward G. Robinson in John Ford’s oddball gangster comedy (co-scripted by Capra collaborators Riskin and Jo Swerling) The Whole Town’s Talking. In Mr. Deeds, her worldly competence contrasts with her emotional vulnerability, making her a superb foil for Cooper’s naïve millionaire. Yet, the romance is so innocent, it seems to reproach Capra’s earlier, more sophisticated love scenes. A requirement of the Production Code, perhaps, or the natural reticence of its basically conservative and faithfully married director. Arthur was Capra’s favorite late career actress, taking over the role of muse ceded by Barbara Stanwyck earlier in the 1930s. Arthur was an insecure performer, although Capra said, “turn the camera on her and she became magical.” Her stage fright was so severe, she had a reputation for being “difficult.” She never saw Mr. Deeds until she watched it with Capra at a film festival in 1972. “Maybe I thought I wasn’t any good, but I certainly knew it was a great picture,” she told Joseph McBride. “The crew felt the same way. We were all just walking on air. On Mr. Capra’s set you always thought, ‘Something wonderful is going to happen.’ When I was crying and working so hard at the end in the courtroom in Mr. Deeds, well, it’s funny, but I forgot about it being a picture. I mean completely. Now I look up at the screen and my face starts to do the same things. I feel the feeling all over again.” 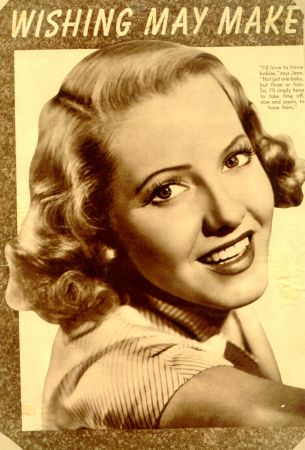 “I’d love to have babies,” says Jean. “Not just one baby, but three or four. So, I’ll simply have to take time off, now and again, to have them.”

Gerald Wealds points out that Mr. Deeds discovers the Depression rather late in the film, and in the decade. It’s certainly not true, as Capra claimed in his autobiography, Name Above the Title, that “Mr. Deeds was the first film that I made in which I consciously tried to make a social statement.” If you’re seen many of the earlier films in this series, you’ll know that an awareness of economic disparity, based on his own experience as a poor Sicilian immigrant, is implicit. Longfellow Deeds many be an innocent, but he’s a shrewd one. He certainly recognizes moochers and phonies when he sees them. He’s been taken in by Babe Bennett’s masquerade because he has a yearning to rescue a damsel in distress, but he reluctantly comes to appreciate her as a real, flawed human being. 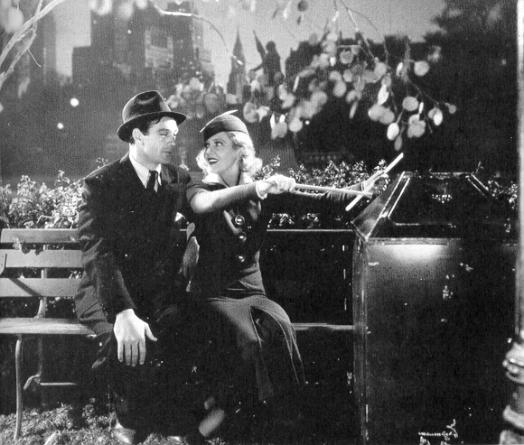 Joseph Walker’ cinematography of Mr. Deeds, like all the films he did for Capra is gorgeous. The rainstorm, the mist, the evening light, the shadows, the silhouettes are rich with beauty and meaning. Movies just don’t look like this anymore. And, all the bit parts are cast with such care, Lionel Stander as the press agent “Corny” Cobb, Raymond Walburn’s valet, Walter, Frankin Pangbourne’s fussy tailor, Gabby Hayes’ outspoken farmer, Walter Catlett’s literary lion. The grasping relative in the satin nightgown is Mayo Methot, whose alcohol-fueled marriage to Humphrey Bogart caused them to be labelled “The Battling Bogarts” in the fan magazines. These studio stock companies are one of the lamented casualties of the studio system’s demise. Frank Capra, Jr., said in his talk at the North Carolina Museum of Art that his father really loved character actors, and enjoyed giving them moments to shine. 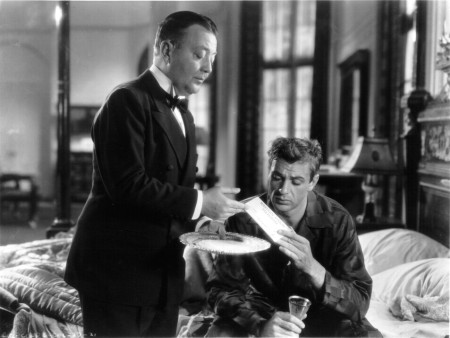 Novelist Graham Greene, then a movie reviewer for The Spectator, thought Mr. Deeds Capra’s best film. “I do not think anyone can watch Mr. Deeds for long without being aware of a technician as great as (Fritz) Lang employed on a theme which profoundly moves him: the theme of goodness and simplicity manhandled in a deeply selfish and brutal world.” 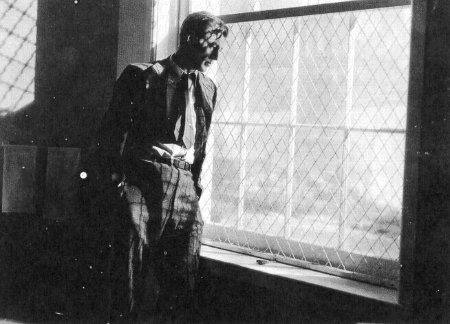 Photo of Cooper and Raymond Walburn from Jerry Ohlinger’s Movie Materials Store, Jean Arthur from anonymous movie star scrapbook, Moviediva’s collection, Capra and Cooper from The Runaway Bride, Cooper behind bars from Poague, Cooper and Arthur from Scherle and Levy. Sources include The Runaway Bride by Elizabeth Kendall, , Frank Capra: the Catastrophe of Success by Joseph McBride, Six Screenplays by Robert Riskin, edited and introduced by Patrick McGilligan, Cinema of Frank Capra by Leland A. Pogue, Canned Goods as Caviar by Gerald Wealds, Romantic Comedy in Hollywood by James Harvey, Gary Cooper, the Last Hero, by Larry Swindell, Gary Cooper, American Hero by Jeffrey Myers, We’re In The Money: Depression American and its Films by Andrew Bergman, Cinema of Frank Capra, by Leland Poague, The Complete Films of Frank Capra by Victor Scherle and William Turner Levy