Masterful John Ford stages the gunfight at the OK Corral with chiaroscuro magnificence against Monument Valley.  The Earps vow vengeance against the sociopathic Clanton boys after a murder and cattle rustling, but Wyatt bides his time. “…a great western because of exactly what it delivers that westerns normally didn’t: a measure of emotional maturity, a sense of dread and cost in regards to violence, a notion of frontier life being difficult and soul-hardening  (tcm.com).

Wyatt Earp has been the subject of more American films than all the U.S. presidents combined (Eyeman 308).  Earp was born in Illinois.  Following his family west, he was arrested for horse stealing in Indian territory.  He jumped bail, eventually getting work as a lawman.  He met Doc Holliday in Dodge City.  Wyatt’s brother Virgil became sherriff in Tombstone, AZ, and all the Earp brothers followed him there, along with Holliday.  But, My Darling Clementine is not about the limiting facts of history. The real shoot-out at the OK Corral was entirely different from the film version.  An early scene in the cemetery in My Darling Clementine (not, as it turns out, even shot by Ford) is rife with historical errors, James Earp was the eldest, not the youngest Earp brother.  The youngest, Warren, was born in 1855, not 1864.  The Earps had no cattle in Tombstone, none of them was killed in a rustling incident; everything on the gravestone is wrong. Doc Holliday, a dentist, died four years after the shootout.  The actual gunfight at the O.K. Corrall happened in 1881 not 1882.  Ford stood by his guns, as it were, about the accuracy of his Western films.  But, they are all a romantic male fantasy.  “Jack used history, he didn’t feel like he was married to it” said Henry Fonda (Blake 61). This film beautifully illustrates the famous quote from another Ford film, The Man Who Shot Liberty Valance, “when the legend becomes fact, print the legend.” 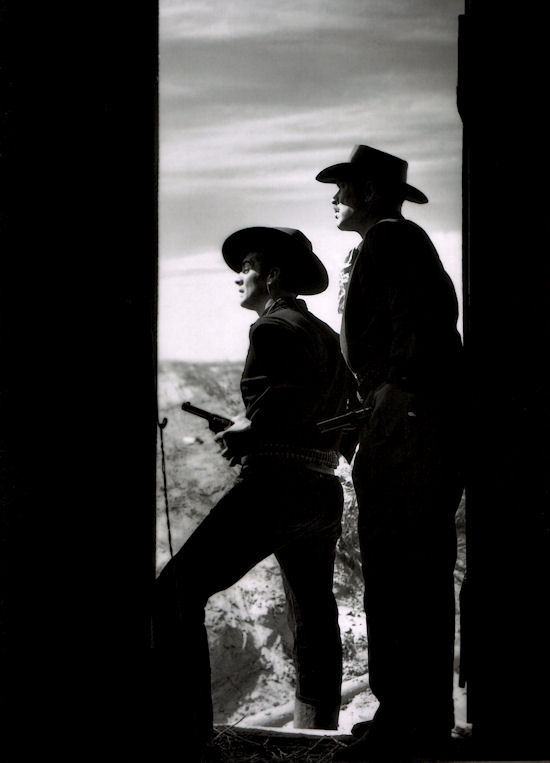 John Ford returned from World War II, not having made a Western since Stagecoach in 1939.  Darryl Zanuck, the head of 20th Century Fox, said that Ford could film in Monument Valley, which provides the breathtaking backdrop for this film.  Ford thought the isolation would be a good way to transition to civilian life.  He claimed to have known Wyatt Earp (who died in 1929) in his early silent movie days, and that Earp had personally told him tales of the famous shootout.  “I asked him about the O. K. Corral, and he pinpointed it for me, drew it out on paper exactly how it happened” (Davis 180).  Earp tried to set the record straight while he lived, spinning his yarns to a writer named Stuart Lake who was working on his biography .  Once Earp realized that nobody was interested in the truth of the old west, that he “spent most of his days happily engaged in his profession, which was gambling” he told his listeners the stories they wanted to hear.  It is highly unlikely that anything Earp told Ford made it into the film.  Lake’s Wyatt Earp: Frontier Marshall was published two years after his death, and consists of Earp confirming his own heroics, glossing over the fact that he was a lawman for only 8 years of his 8 decade life. Clementine creenwriter Winston Miller said, “I wasn’t interested in how the West really was, I was writing a movie.” (Lyons 181). 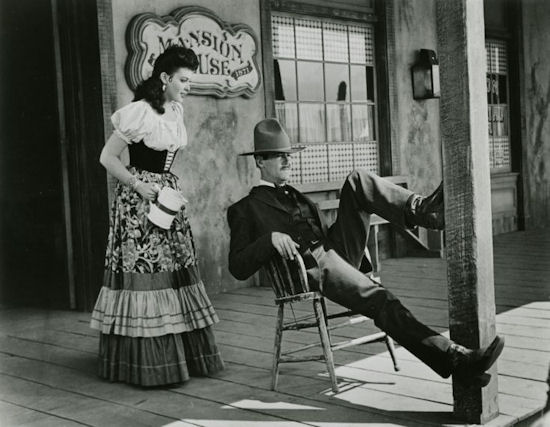 Ford had filmed in Monument Valley before, and used as his base a trading post run by Harry Goulding, which was on Navaho tribal land. Today, in the movies and on tv, in print ads and video, Monument Valley’s 96,000 acres is an inescapable symbol of American self-reliance and the pioneering spirit. Everyone on a cross-country odyssey of self-discovery simply must go there. It has lost its meaning in a morass of truck and SUV shills and rugged individualist clichés. Yet, during John Ford’s lifetime, directors hesitated to appropriate his most characteristic location. Only Road Runner and Wile E. Coyote were allowed in. The paved road that used to prevent Ford’s most famous shots from being duplicated wasn’t put in until the 1950s.

In 1938, Harry Goulding and his wife were scraping by with a trading post near an impoverished Navaho reservation on the Arizona-Utah border. The Depression had hit hard and his starving customers had pawned all they had to pawn. The Gouldings heard (probably from the Wetherills, who owned another trading post) that John Ford was planning a big-budget Western, which turned out to be Stagecoach. The Wetherills had occasionally hosted other travelers and a movie company or two in the silent days. Cartoonist George Herrimann stayed with them, and set his Krazy Kat comics in Monument Valley. Only a dirt track lead the way in and few people had ever seen the staggering monoliths. One version of the story says that the Gouldings gathered a stack of photos and drove to Hollywood. At the studio, the receptionist said Goulding had to have an appointment. “I can wait. I’ve lived among the Navajo so long that I don’t get so busy that I can’t wait. I’ve got a bedroll. I’ve got plenty of time, so I’ll stay right here.” The location director was hastily summoned and he in turn brought Ford. They pored over the photographs for hours.  Stagecoach brought the talkies to Monument Valley for the first time. 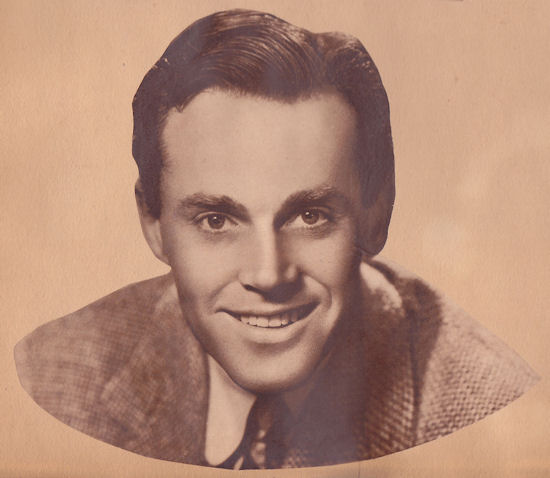 This scrapbooker cut out Henry Fonda like a paper doll.

Ford knew he wanted to return to Monument Valley to film My Darling Clementine.  The breathtaking shots of the valley create a wild territory just past the dusty outpost of cinematic Tombstone’s civilization.   “Monument Valley gave the impression that it is as it has always been—permanent, implacable, sacred” (Eyeman 197).  The Valley gained symbolic meaning through the Ford’s dramatic compositions and cinematographer Joseph MacDonald’s camera. 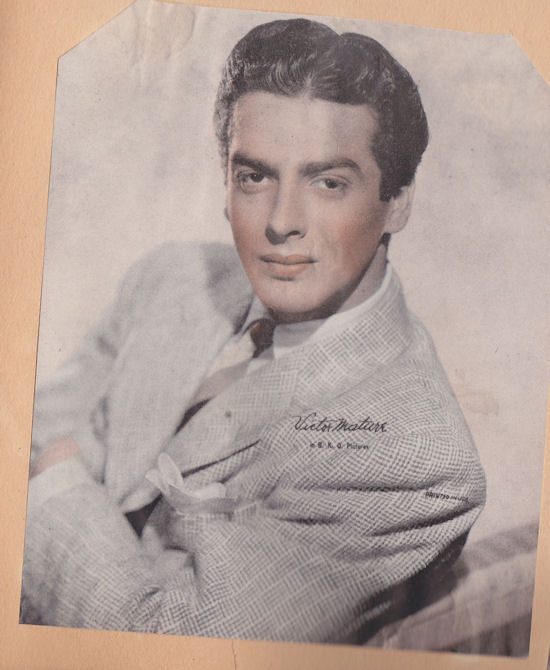 This is a hand-colored pretty boy studio publicity photo of Victor Mature.

Goulding, fluent in Navaho, was an invaluable liason.  For Clementine, the company would be 180 miles from the nearest railroad, and far from the meddling of studio executives, Ford’s personal problems, or challenges to his authority.  The film company built a landing strip for private planes, allowing materials to come in quickly, if needed, and footage could be returned to Hollywood daily.  It was also available in case anyone was injured during filming.  A massive crew arrived to build a town in the shadow of the monoliths, 700 craftsmen and actors living in the remote area for the duration, a boon for the local economy.  The town, which cost $250,000, consisted of real buildings, not false fronts.  They were used to store equipment, and for wardrobe, hair, and make-up, as well as the set.   The company provided many well-paying jobs for Navaho tribal members, both in front of and behind the camera.  Although Ford was known for being a tyrant on the set, Fonda recalled the comradery of the location, “It was Ford at his best” he remembered (Davis 186).  Ford was surrounded by his “stock company” of regular actors, contributing to his enjoyment.  Many others bonded over making first film since being discharged from the service, including Henry Fonda and Victor Mature, who played Doc Holliday.  Ward Bond, who played Morgan Earp, and Linda Darnell (Chihuahua) helped out in the trading post if they weren’t needed in front of the camera. 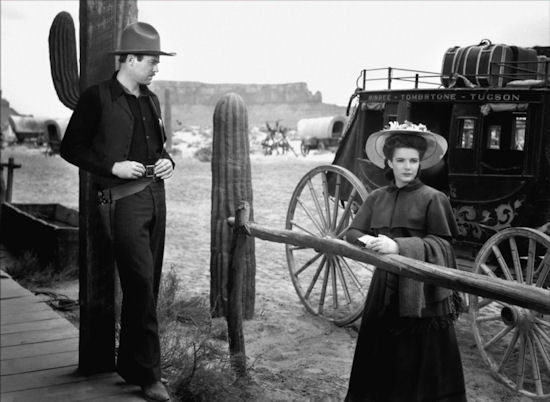 Ford had always wanted Fonda for Wyatt Earp, but other casting choices were less smooth.  The part of Clementine was so small, more talented actresses, like Anne Baxter and Jeanne Crain would be wasted on it, according to the studio.  Ford wanted Douglas Fairbanks, Jr. for Doc Holliday, or maybe Vincent Price.  But, Zanuck wanted Victor Mature even though his beefy build did not suggest a man dying of TB.  Ford never liked Darnell as the dance hall girl, Chihuahua.  Ford usually picked one actor to torment on set, in this case, it was Walter Brennan, playing Pa Clanton.  He wasn’t much on a horse, “Can’t you even mount a horse?” Ford razzed him, “No, but I got three Oscars for acting” he snapped (Eyeman 313). 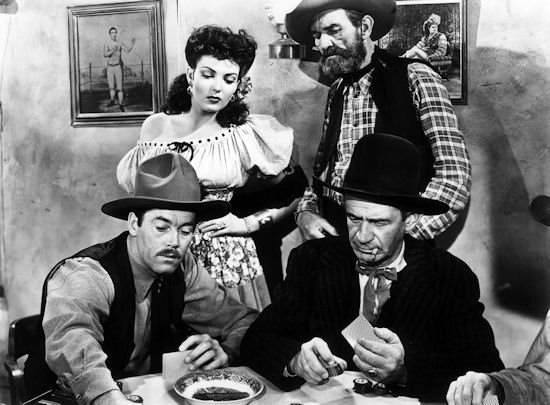 Wyatt Earp was a gambler by profession, not a sheriff.

More than one person has observed that the whole film reflects Fonda’s slow elegance, “My Darling Clementine is a Westerner’s Western, laconic, unfussy, large-spirited, perennially modern in its quiet contemplative mood and dark undercurrents.  Nearly every exterior shot is framed to include vast expanses of sky, and, in a particular masterstroke, the gunfight at the O. K. Corral is played without blaring music, but with natural sounds, wind, boots scuffling for purchase in the sane.  The silence is eerie and haunting” (Eyeman 314).

When the picture was over, cast and crew drove away, leaving the town set intact.  They sold it to the Navaho Tribal Council for $5.00, and they occasionally rented it out to other movie crews for five years, but it was then dismantled and sold for salvage.  Visitors who made the trek into the wilderness to see Monument Valley did not want to see a movie set blocking the view.

The pace of the film is leisurely, which suited Ford, although not studio executive Zanuck, who insisted on a barrage of little changes that infuriated the director.  Ford said he never liked this film because of the front office meddling.  But, in the 1990s, a 35mm nitrate pre-release print was discovered at UCLA, much closer to Ford’s vision.  That is the version you will see in this restored DCP at the NC Museum of Art tonight. 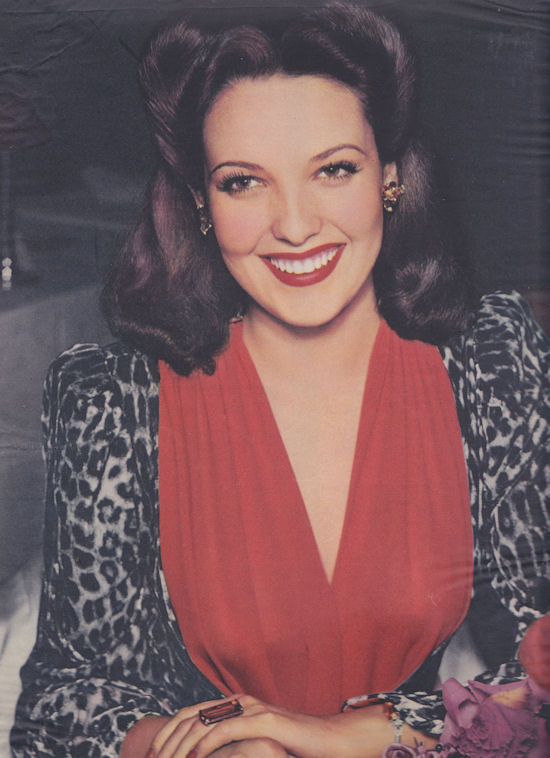 This photo of Linda Darnell was printed in an oversized newspaper supplement. 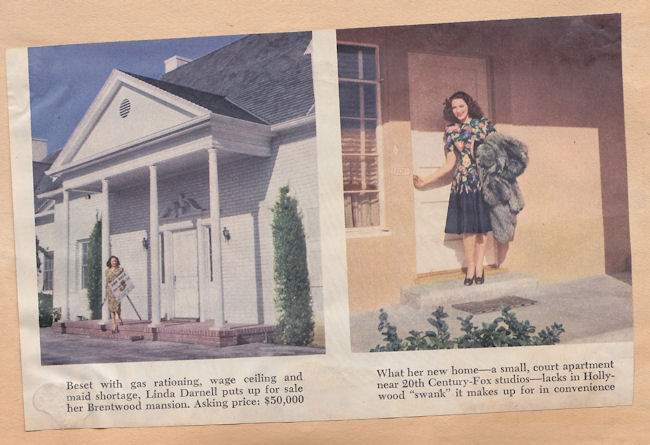 Darnell gives up her mansion as part of the war effort.

The film has been analyzed exhaustively, but safe to say, very little of the symbolism was intended by Ford.  The disregard of historical accuracy reinforces the established tradition of the Western film, allowing Ford to highlight his themes, the conflict between law and lawlessness, wilderness and civilization, east and west, and individualism and community.  His film is a classic of the genre.

I don’t show a lot of Westerns here at the NCMA, because most of them are too racist and too rape-y for me.  The modern ones that attempt a revisionist history, are often still rape-y, and ultraviolent.  So, where that that leave tales of the frontier?  I like the funny ones, like Destry Rides Again, and Cat Ballou, and the ones that are like a 1960s caper film, like The Professionals (although, with Jack Palance and Claudia Cardinale cast as Mexicans, that qualifies as slightly racist, even if their characters are not stereotyped).  We tend to look on these films as a reflection of our history, or at least of our idealized history.  But, I recently learned from my favorite ridiculous tv show, Timeless, that the real life figure that inspired the Lone Ranger was black (look it up) and I have to ask, where is that story?

Both My Darling Clementine, and next week’s film, Shane, were made after their directors returned to civilian life after their WW II service. Both Ford and Stevens had filmed combat, and came back with a different feel for cinema violence. In both films, the hero only reluctantly picks up a gun.

“As the conquest of the West became the nation’s creation myth, the saga incorporated elements of the American dream: equality, freedom, democracy, individuality, social harmony, open land, economic gain, change rebirth—ideals that contain conflicts and contradictions among themselves.  My Darling Clementine mirrors the stress within American civilization, pitting freedom against social responsibility” (Davis 192).

“My favorite location is Monument Valley, which lies where Utah and Arizona merge.  It has rivers, mountains, plains, desert, everything the land can offer.  I feel at peace there.  I have been all over the world, but I consider this the most complete, beautiful and peaceful place on earth” (Lyons 140). 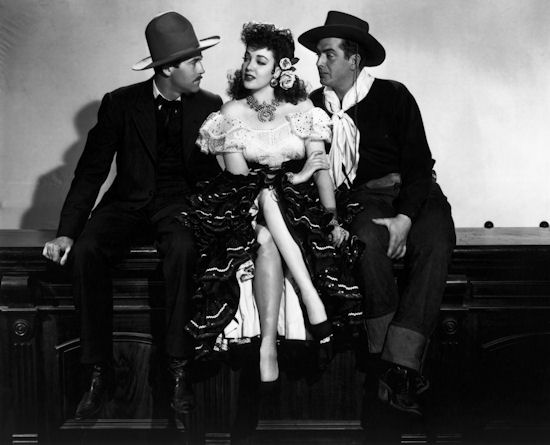