A dizzy heiress unearths a “Forgotten Man” from the city dump to win a society scavenger hunt and decides to reform him by engaging his services as the family butler. Screwball comedies often focused on class differences and they thrived during the Depression era when audiences enjoyed seeing rich folk put in their place. The glamorously witty Powell and Lombard top a splendidly lunatic cast. “A firefly with a sting in its tail” (Illustrated London News).

My Man Godfrey is one of the glittering jewels of screwball comedy, a genre described by critic Andrew Sarris as “sex comedy without the sex”, as comic aggravation is substituted for the more conventional signs of love. In baseball, a screwball pitch is one that has an erratic path, although it is thrown in a precise manner. In the 1930s the cinematic term could be interpreted as “lunacy, speed, unpredictability, unconventionality, giddiness, drunkenness, flight and adversarial sport” (Sikov). Such films often show equality between men and women, at least as far as the wisecrack is concerned, and women are often the romantic aggressors (perhaps, men found this particularly amusing). In 1934, the censorship guidelines of the Production Code were enforced and all racy behavior (among other objectionable topics) was banned. Coincidentally or not, the first two prototype screwball comedy classics, It Happened One Night and Twentieth Century were made in that year. If the screwball style benefited from film censorship, it also did well because of the influx of Broadway playwrights to Hollywood at the beginning of the sound era, as they brought their witty verbal style from stage to screen. Visually, screwball comedy melded glamorous Art Deco settings with the traditions of silent slapstick to create a new hybrid form. In these films, humor, both verbal and physical, provides the intimacy necessary for love. In My Man Godfrey the most tender moment occurs, incongruously, over a sink full of dirty dishes.

The novel, My Man Godfrey by Eric Hatch, was considerably different from the film. In the novel, the character of Godfrey was bland, the comedy was tentative and the social commentary muted. The original version was called “Irene, the Stubborn Girl” and the heroine was “the dumbest girl who ever ‘came out’ at the Waldorf.” Hatch’s other major film credit was the script for the supernatural comedy Topper, and he was a staff writer on the New Yorker, although he is largely forgotten today. Even though Hatch is credited as a co-writer on the screenplay, the film’s wit and impish satire seems to be the result of the teaming of Morrie Ryskind, who had written for the Marx Brothers, and collaborated on the Pulitzer Prize winning satirical musical Of Thee I Sing with George S. Kaufman and George and Ira Gershwin, and renegade director Gregory La Cava. La Cava re-wrote the script extensively on the set, a practice viewed with suspicion by movie studio executives. He and Ryskind brought to the fore many of the latent socio-political themes in Hatch’s novel, setting it firmly in the economic divide created by the Great Depression.

Director Gregory LaCava’s career high points were two silent films he made with W.C. Fields and two mid-1930s comedies, My Man Godfrey and Stage Door. He was ambivalent about being a director, and would have preferred to be a painter, having studied art with John Sloan, Robert Henri and George Bellows, members of the “Ashcan School” whose work embraced a new urban realism. Forced to support his mother and siblings, La Cava became a newspaper cartoonist, and then part of the team bringing animated versions of popular comic strips like “The Katzenjammer Kids” to the screen. From cartoon director it was a relatively short step to becoming a director of live actors. Gerald Weales points out that of all the 1930s screwball comedy directors La Cava was “least interested in romance and most interested in pure comedy.” My Man Godfrey is both painterly (as in Irene’s beautifully photographed entrance, her shimmering otherworldly gown glowing in the city dump chiaroscuro) and psychologically complex, benefiting from the director’s personal experience of psychoanalysis.

Godfrey, played by debonair William Powell, is a calm oasis in the center of the Bullock family, and makes them appear even more freakish. Powell was born in 1892 and was a Broadway actor before his debut in silent films, where he often played a villain. Talkies were able to take advantage of his wry, sophisticated manner. His signature part was society detective Nick Charles, teamed with Myrna Loy in the successful series of Thin Man movies. Powell was nominated for an Oscar for My Man Godfrey (he lost to Paul Muni in the dignified Story of Louis Pasteur; Oscars rarely go to comedy performances). In fact, My Man Godfrey was nominated for—and lost—Oscars for Best Director, Screenplay, Actor, Actress and Supporting Actor and Actress (Auer and Brady). 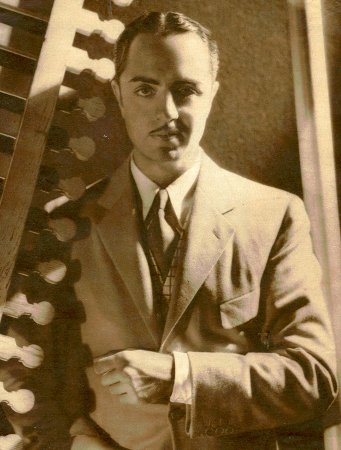 “William Powell looks like a sophisticate, but he isn’t. All his man-of-the-world veneer slipped away when he fell in love with Carole Lombard. There were married in July, 1931, and even cynical Hollywood thinks they’re ideally happy. Bill loves domesticity and adores strawberry shortcake. He gets about $7000 a week for three pictures a year. Warners says his next picture “The Jewel Robbery” with Kay Francis is a lulu.”

Carole Lombard moved to Hollywood as a child with her mother and siblings and slipped into the movies by the age of 12. She dropped out of school at 15, raced around in Mack Sennett comedy shorts in the last years of the 1920s, and was signed to a Paramount contract in 1930. The studio tried to groom her as a mysterious “Orchid Lady” but she didn’t have the heart for the slinky melodramatic parts in which she was cast, although she was happy to pose endlessly for a stunning series of studio glamour photos. Her role as the histrionic Lily Garland opposite John Barrymore in Howard Hawks’ Twentieth Century was a comedy breakthrough for her, even though the film was not a big hit. My Man Godfrey made her a genuine star, fusing the slapstick actress with the “Orchid Lady” to create a bright, modern heroine. Powell, Lombard’s amiable ex-husband, insisted that her casting be a condition of his signing for the picture. Powell and Lombard were loaned out by their studios (MGM and Paramount, respectively) to Universal for this film. Lombard brought Ted Tezloff, her favorite cinematographer, with her, and designer Travis Banton to create her exquisite gowns. She plays Irene Bullock uninhibitedly. “Not every star of Carole’s magnitude would go so goofy for her art” (Weales). 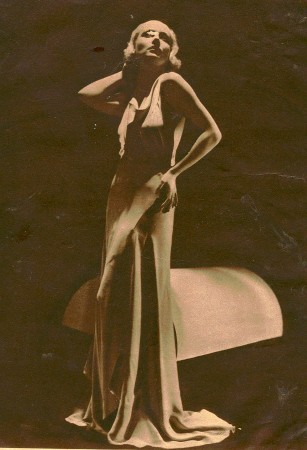 “A woman of stone? Well, hardly! Carole’s beauty may be the kind that sculptors dream about, buy beyone those classical lines there’s a heart working overtime–because it’s owner is one bathing girl who rose to stardom instead of banishing. She’ll be anything but marble in ‘Sinners in the Sun.'” Lombard in her “Orchid Lady” stage. Scrapbook assembler Hilda Price got a spot of glue on Carole’s eye. 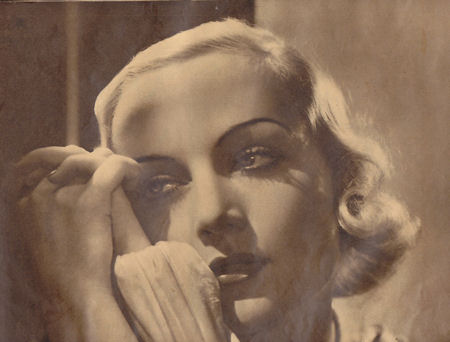 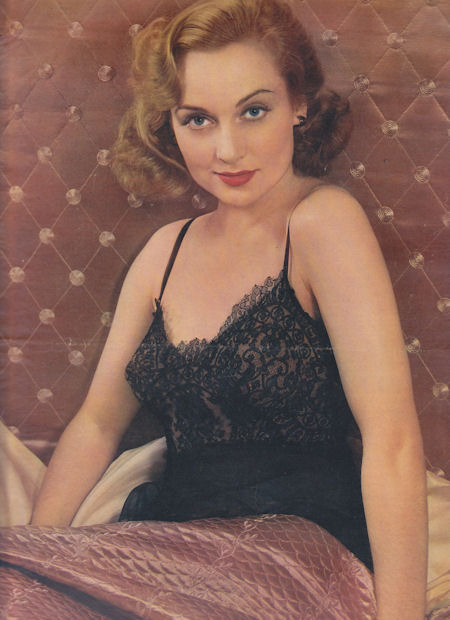 “Lombard was one reason the public indulged and tolerated some of the wilder excesses of that comedy. She was so lovely, so sexy, so widely beloved. She was like an ambassador to the sane, prosaic world; she mediated the craziness even while she exacerbated it. She was—and is—brilliant, peerless, unique” (Harvey). The appealing romantic self-restraint in screwball comedy is a product of its time. Since the sexual revolution of the 1960s, screenwriters have had a harder and harder time keeping romantic couples apart for the length of a film. Molly Haskell (in the introduction to Screwball) asks: “Do we now treasure the beautifully passionate Puritans of the screwball era precisely because they respected and even revered the fearsome chasm between yes and no in sexual consent?” 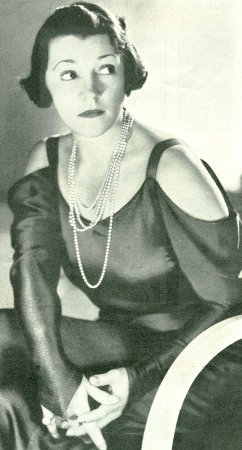 Glamour shot of Alice Brady from the March, 1934 Photoplay magazine

Studio era Hollywood was rich in supporting players whose excellent performances enlivened many a film. My Man Godfrey is unimaginable without the character parts of Alice Brady and Eugene Pallette as Mr. and Mrs. Bullock, Mischa Auer as Carlo, Mrs. Bullock’s “protégé,” and Gail Patrick as Irene’s frosty older sister, Cornelia. 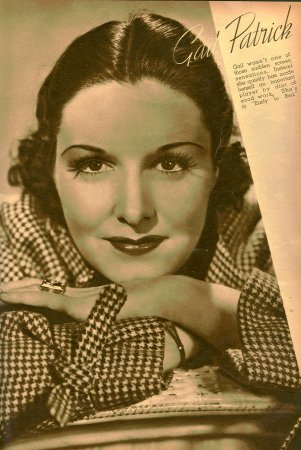 “Gail wasn’t one of those sudden screen sensations. Instead, she quietly has made herself an important player by dint of good work. She’s in ‘Early to Bed.'”

The Irene Bullocks’s 24 costumes were designed by the brilliant, erratic Travis Banton. Lombard is supremely elegant, but her gowns are just a wee bit over the top, too sparkly, too swishy, too frilly, just as her hair has a few too many unruly curls. She appears as a vision at the beginning of the film in her heavily bugle-beaded silver gown. This superb costume was in a recent show of Hollywood Costume at the Victoria and Albert Museum in London, these photos below, a studio portrait of Lombard, and a museum consevator mounting the dress for display are in the catalogue edited by Deborah Nadoolman Landis. 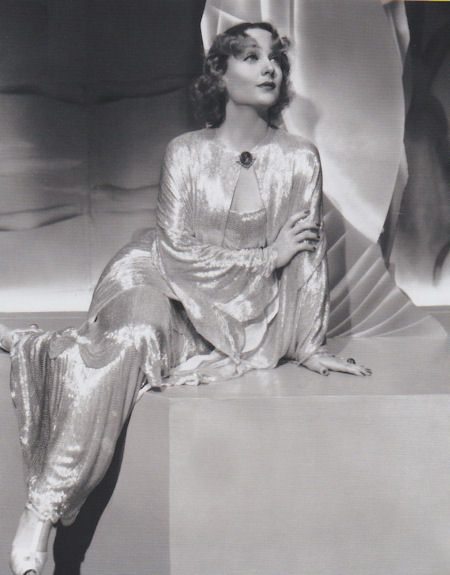 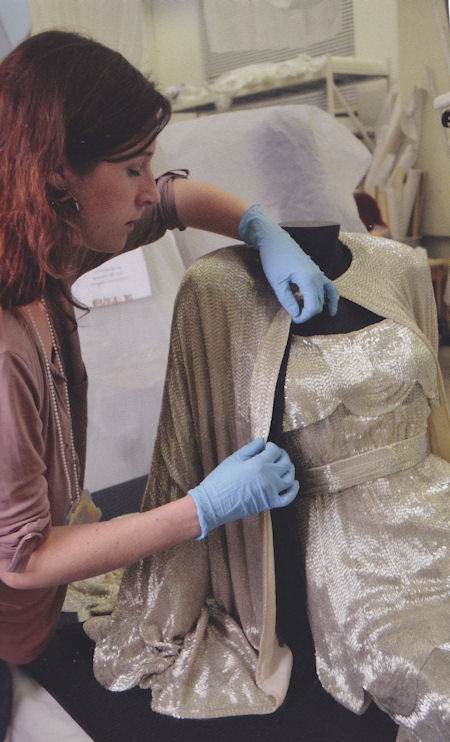 The luxurious opening credits of My Man Godfrey give way to the squalor of a landfill. William Powell, one of the most sophisticated actors of the 1930s is introduced in the clothes of a homeless man, shocking in the implication that anyone might become down and out. He is about to move uptown to another kind of dump, one filled with spoiled rich white people. Both Bullock sisters are infantilized by their wealth and position in society. Irene, the good little girl, and Cornelia, the bad little girl, are both in dire need of wisdom and maturity. In My Man Godfrey, a stranger enters a closed society causing disruption and change, but Godfrey’s positive influence heals the Bullocks’ zany, dysfunctional family. 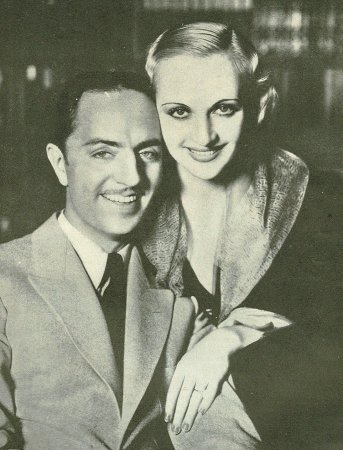 “Came the wedding bells! Carole Lombard is now Mrs.William Powell. Hollywood had been looking forward to an elaborate autumn wedding, but Mr. Powell and Miss Lombard surprised folks with a sudden and quiet ceremony, only relatives being present. Then they slipped away to Hawaii, the honeymooners’ delight. Miss Lombard is not only one of the prettiest girls in the movie colony, but she has been advancing rapidly–and Hollywood holds high promise for her. Mr.Powell is an able actor and a great fellow.”