There are 8 million stories in The Naked City! As a hot summer night works its way towards dawn, a murder is discovered; a girl whose crime was “wanting too much–that’s why she went wrong. Bright lights, theaters, furs and nightclubs. That’s why she’s dead now. Dear God, why wasn’t she born ugly!” A narrow apartment kitchen, rush-hour subways, the Williamsburg Bridge and Lower East Side streets swarming with passers-by are among the 107 riveting locations around NYC. No other film had ever conveyed the immensity of police work in the teeming metropolis.

Feature films had not been shot on location in NYC since the silent era, when Mark Hellinger, a former columnist, screenwriter and veteran of the Army Air Force’s Motion Picture Unit proposed that a fiction film made with the urgency of a documentary would be a fresh approach to the crime film. There were plenty of films set in New York, of course, in the fantasy New York of the Hollywood backlots and soundstages, created by writers and directors nostalgic for the cultural rush and urban beauty of the East Coast. Second unit crews shot background shots in the city, and newsreels were still made there. But, feature film making in NYC was only a memory. A few films had attempted something more ambitious, notably a sequence shot with hidden cameras on Third Avenue in Billy Wilder’s The Lost Weekend.

The script was originally called Homicide, but was renamed The Naked City, a title purchased from the still photographer WeeGee, notorious for his unadorned, sometimes ghastly flashes of New York after dark. In the summer of 1947 a full crew commanded by director (and former New Yorker) Jules Dassin descended on the city. The onlookers created countless problems for the police assigned to protect the filmmakers. Perhaps as many as 200,000 spectators watched the filming around town at different times, and others kept up with the production schedule in the daily newspapers.

It is producer Mark Hellinger’s voice you hear in the narration; sadly Hellinger died of a sudden heart attack (at 44!) just after a preview of The Naked City. But his vision of documentary flavored realism changed the way New York would be viewed as a film location, and continues to influence movies and tv shows today. The murder investigation used the vast complexity of the city to convey the daunting nature of the police detectives’ task. The camera revealed the ethnic diversity of the metropolis, and journeyed from the Lower East Side to Park Avenue, and where the camera had never ventured before, the Bellevue Hospital morgue. The Naked City “showcased New York City as the ultimate existential challenge to civilized man.” (Dikos).

New cameras with sharper lenses, directional mikes, faster film and bright, portable lights that could even run off house current allowed shots that were never possible before. Cinematographer William Daniels was able to shoot scenes ranging from the stunning opening shot of the skyline to those filmed in a tiny rooms. He won an Oscar for The Naked City‘s revolutionary cinematography, but he was no young upstart. Daniels was a master of Hollywood glamour photography, and had been Greta Garbo’s favorite photographer at MGM since the silent era. Leading lady Dorothy Hart is permitted one brief studio-style close up. Soon, other directors were yearning to leave Hollywood and film on location in New York. Gene Kelly and Stanley Donan wanted to film all of On the Town in NYC, but were given permission for only 5 days on location to film the opening number. Their haste can clearly be seen in the finished film, where crowds of onlookers watch the movie people make magic, at Rockefeller Center, for example.

Jules Dassin, blacklisted during the days of the HUAC investigations of Hollywood communists, made classic film noirs on location in three great cities, New York, London (Night and the City with Richard Widmark) and Rififi in Paris. He was born in 1911–and is still alive. He grew up in Manhattan and the Bronx, and worked as an actor, then a director and writer in the Yiddish theater. He got into radio, directed a Broadway flop and then got a contract in Hollywood, where he was the assistant director on Alfred Hitchcock’s Mr. and Mrs. Smith. He directed a short, The Tell-Tale Heart, which TCM shows quite a lot, and this led to him getting a job directing feature films.

His first film after liberation from the confines of a studio contract at MGM was a raw and sadistic prison drama, Brute Force. Dassin collaborated with the team he would reunite for The Naked City, producer Mark Hellinger, cinematographer William Daniels and composer Miklos Rosza. Brute Force‘s script was by future director Richard Brooks. As claustrophobic as The Naked City is large and open, Dassin benefited from an intense and riveting star performance by Burt Lancaster. There are many interesting supporting performances in this film as well. Howard Duff is “introduced” (as “Radio’s Sam Spade”) and appears along with Jeff Corey, John Hoyt and Whit Bissell, with an uncharacteristically sadistic performance by Hume Cronyn, and the magisterial Charles Bickford. The atmospheric photography was an effort to fuse expressionism with the kind of documentary realism he would tackle in his next film, The Naked City.

Albert Maltz wrote The Naked City and became one of the Hollywood Ten, going to jail rather than name names before HUAC. Dassin was at the 1951 Cannes Film Festival when he learned he had been named before the committee by director Edward Dymytryk. He never returned to live in the US. He married Greek actress Melina Mercouri, and directed her in a couple of big international successes, Never on Sunday and Topkapi. They remained married until her death 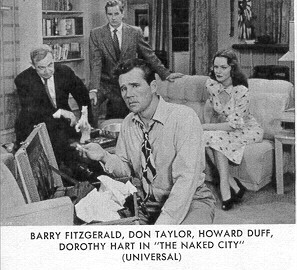 Barry Fitzgerald is the most well-known actor in The Naked City, as the cynical but kindly Irish homicide Lieutenant, given able support by a weaselly Howard Duff and noble Don Taylor. But, watch for a raft of character actors whose faces would soon be familiar from television. I spotted David Opatashou, James Gregory, Kathleen Freeman, Arthur O’Connell and John Randolph, but look also for Nehimiah Persoff, and silent film actresses Beverly Bayne and Enid Markey, “Jane” in the first Tarzan movie. Yiddish theater star Molly Picon has a small role as the owner of a Lower East Side soda shop.

“The buildings in their naked stone, the people without make-up” this is New York during the sweltering summer of 1947. A girl’s death, hashed out for a nickel in the daily papers, “the marmalade on 10,000 pieces of toast”–8 million stories in The Naked City. This has been one of them.

(Photo from A Pictorial History of the Talkies by Daniel Blum. Sources include Celluloid Skyline by James Sanders, Street With No Name by Andrew Dikos, Letter in November, 1962 Films in Review.