A hard luck dame lands a spot in nursing school and then hires herself out to a swanky family to mind two mysteriously ailing little girls.  Night Nurse has it all, lacy lingerie, bootleg hooch, hopheads, child abuse and a great, censor-evading insult.  Tough talking Stanwyck is more than a match for a sinister chauffeur (played by rising star Clark Gable) and a genial bootlegger. Danny Reid on Pre-Code.com says: “There are few I’ve seen that are as infectiously fun and crazy as 1931’s Night Nurse. It’s a deceptively tight B-movie, filled to the brim with everything that makes pre-Code fun while toying with social issues and never losing an ounce of momentum… director William A. Wellman has concocted a roller coaster for the ages.”

Barbara Stanwyck was just beginning her film career in 1931, this was her 6th feature film, not counting a short and an unbilled bit as a showgirl.  She was leant to Warner Brothers for the film, still under contract to Columbia.  She would be directed by William Wellman, who had made the epic WW I air ace battle film, Wings (he’d been a pilot in the Lafayette Flying Corps) and had finished James Cagney’s breakout gangster film, The Public Enemy, only a few weeks before.  He wouldn’t stay at WB for long, but every Pre-Code film he directed is worth watching.

Night Nurse is based on a novel by Dora Macy, the pen name of Grace Perkins Oursler.  She said she based the book on the true-life experience of a nurse she had known.  The NYU School of Medicine Medical Humanities database lauds the novel for its realistic depiction of nurses’ training, and how medical ethics take a back seat to obedience to authority figures. The origin of the nurses’ uniform is in fact an echo of the white cap of the maid, a nurse was originally supposed to be the doctor’s servant, and not a professional in her own right.  This hierarchy is still reflected in nursing today.  In the novel, her employer’s older daughter is raped by the evil chauffeur, and Lorna’s determination to testify against him gets her fired and ousted from the nursing profession. 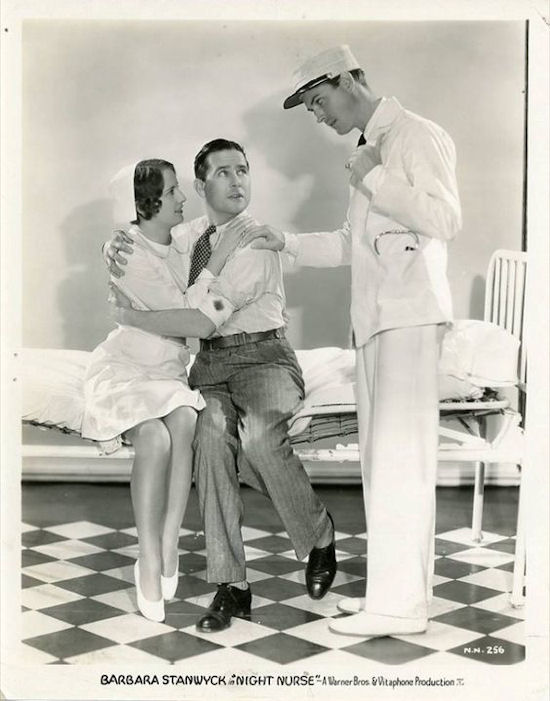 Barbara Stanwyck came up the hard way, a Brooklyn girl who’d been hoofing in the chorus line since she was 15. She came to Hollywood with her husband, vaudeville star Frank Fay, to break into movies. Whatever magic he had on stage did not transfer to celluloid. He went from one wretched picture to another, and he drank more and more. He couldn’t tolerate his wife’s success, and their marriage would not last long. Their unhappy relationship is one of the several real-life inspirations of A Star is Born. But, it was Fay who insisted that director Frank Capra look at a test his wife had made for Warner Brothers, convincing the reluctant director she was perfect for the lead role in Ladies of Leisure her breakthrough part. Stanwyck’s odd beauty, her Brooklyn accent, her vulnerability, her grit and her electric raw emotions set her far above the run-of-the mill starlet. She also played a fake evangelist for Capra in  The Miracle Woman a cheap bootleggers daughter from a factory town, who sleeps her way to the top of an Art Deco skyscraper with no regrets in Baby Face and a hard-boiled mail order bride in The Purchase Price during the Pre-Code era.  She would go on to a long and distinguished career, playing indelible roles in films like Double Indemnity and The Lady Eve, and going onto tv in the 1960s and 70s. 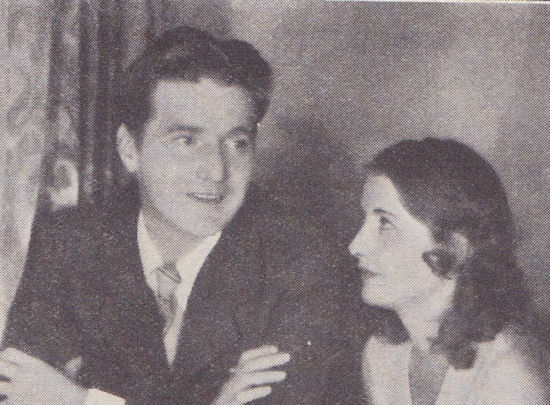 Fan magazine portrait of Frank Fay and his wife, looking at his adoringly.

Ben Lyon was never a top tier star, although he was a reliable leading man in the late silent and early talkie eras, appearing with many A list actresses.  His big break-through was in Howard Hughes Hell’s Angels, in which he piloted his own plane.  The same year he married Bebe Daniels, who had started out with Harold Lloyd, rose to the top with sexy roles for Cecil B. DeMille.  When both their film careers started to decline in the mid-1930s, they moved to England, where they appeared on stage together and had a popular radio show.  During WW II he was a combat pilot with the British Royal Air Force, and later in life was awarded an OBE from Queen Elizabeth for his war work.  In 1946 he was at 20th Century Fox and met a young actress named Norma Jean Doughtery.  He thought she was like his Hell’s Angels co-star Jean Harlow all over again, he arranged a screen test, renamed her Marilyn Monroe, and signed her to her first movie contract.  I have a collection of autographed photos of silent film stars in my home, and once a friend brought his parents to visit—his step-mother said, “Why do you have a photo of my Uncle Ben?”  It turned out she knew them both well in her childhood, and had fond memories of the couple. 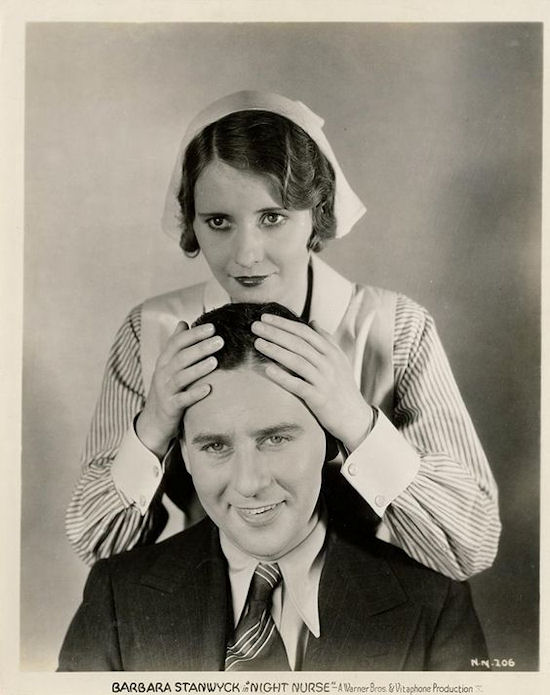 Is this supposed to be affectionate? It looks like she is ready to crush his skull. 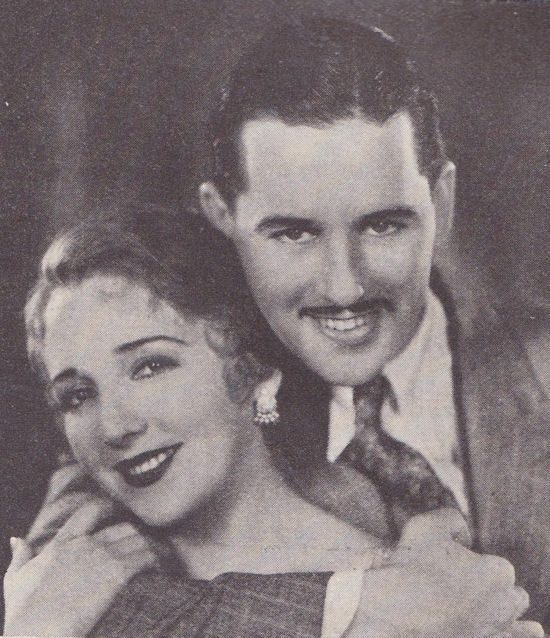 Bebe Daniels and Ben Lyons in the early 1930s.

Joan Blondell improves any film just by being in it. She was born in a trunk, and made her first appearance on stage in the arms of her vaudevillian parents. Her youth was spent in perpetual touring with Ed Blondell and Company. At 17, the family was passing through Dallas, TX, and she entered and won a beauty contest. The $2000 prize helped her family negotiate the era when vaudeville was being killed by the movies. She worked odd jobs during the day and acted for free at night, until Broadway beckoned. Her success in The Trial of Mary Dugan and then Penny Arcade led to Hollywood. She and James Cagney costarred in Penny Arcade, and arrived at Warners together. A couple of–at the time–more well known actors, Grant Withers and Evelyn Knapp, were given the parts she and Cagney played on stage. But, when the execs viewed the rushes, it was clear that the newcomers needed to be put under contract, pronto. The studio lobbied to change her name to Inez Holmes, but she refused, trembling that her small rebellion would lose the chance at a five year contract. Everyone at Warners worked hard, in the early 1930s she made 27 films in 30 months. She was known as “one take Blondell” which stood her in good stead as she toiled in the Warners factory, “They’d even pan me going to the ladies’ room,” she said. The wise cracking babe was her specialty. She made seven movies with Cagney, and 10 with Dick Powell, who she married in 1936. “We both knew what “camp” was. We had a sense of humor; we needed it too, to play some of the roles we were given. We’d been doing the same sort of films for so long that we used to change our lines around or add to them, ad-lib during filming, and nobody would be any the wiser.” (Kobel). 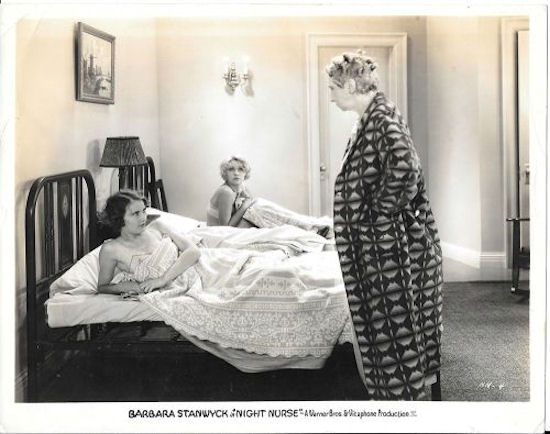 William Clark Gable was born in Cadiz, Ohio, his father was a failed oil prospector, his mother died a few months after he was born.  His closest family relationship was with his stepmother. When he was 17, he saw a road show of Bird of Paradise in Akron OH, an exotic melodrama in which a native island woman, spurned by her white lover, jumps into a raging volcano.  He was hooked.  Unfortunately, his talents took a while to manifest.  He worked a dizzying series of manual labor jobs, alternating with back stage and bit parts all over the country.  Eventually, he was taken under the wing of Josephine Dillion, 14 years his senior, who smoothed away his rough edges and began to promote his stage career.  They were married when his next motherly mentor, Ria Langham, took his theatrical aspirations to a higher level before they, in turn, married. His smash hit role as “Killer” Mears in a prison drama, The Last Mile, brought him to Hollywood.  His big ears and beefy build nearly quashed his film career, but he realized theater was struggling after the crash, and the movies made for a steadier paycheck.  He had a few roles, but then Irving Thalberg at MGM decided Gable would be the next big star, and should be cast opposite all their female powerhouses.  “He was willing to be molded.  He wanted to be a star.  He wanted to be a success” said MGM’s head of publicity (Harris 70).  When he smacked Norma Shearer around in A Free Soul and kept Joan Crawford in a swanky penthouse in Possessed later in 1931, his career was made.  Screenland called him, “a lumberjack in evening clothes, the answer to ten million maidens’ prayers” (LaSalle 80). 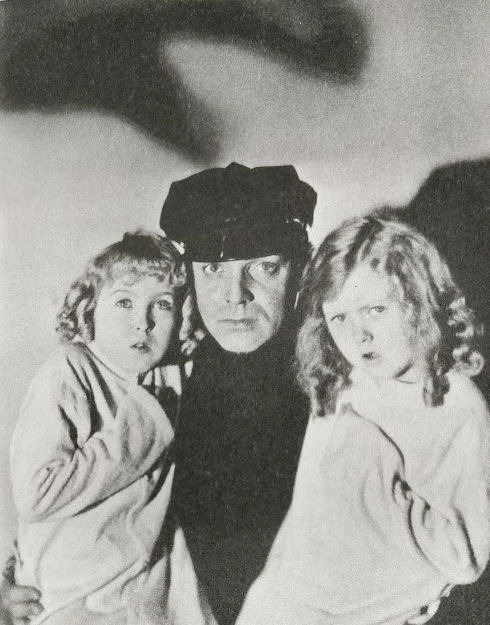 There is much discussion of “milk baths” for the ailing children.  At the time, it was believed that nutrients could be absorbed through the skin.  Today, milk baths are still used as a beauty treatment, by the celebrities who can afford that much milk! The twitchy doctor is supposed to be a drug addict, I believe (based on evidence from other Pre-Code movies). A dipsomaniac (which the mother says proudly that she is) is a drunk. “Hopped up” also refers to drugs, most likely cocaine.

The film was shot in 24 days.  Wellman wanted it to be the flip side of The Public Enemy, showing the ravages of bootleg booze, and wanted Nurse Lorna to be just as tough and uncompromising as Cagney’s gangster.  Wellman insisted on newcomer Clark Gable for Nick, the chauffeur, he wanted somebody who looked like a real tough guy.  Mervyn LeRoy had tested him to be a racketeer in Edward G. Robinson’s Little Caesar, but the studio rejected him and opted for Douglas Fairbanks, Jr.  Wellman saw their mistake, “They forgot to look at Gable’s dimples and listen to his voice and see his smile” and Barbara agreed, “The instant Clark walked onto that set, I knew, we all knew, that here was a striking personality.  He commanded attention” (Wilson 239). 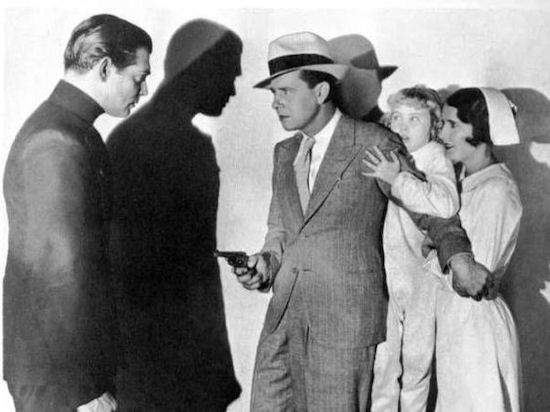 Night Nurse premiered on Stanwyck’s 24th birthday, the reviews were positive, and the lines were around the block.

James Wolcott adores Pre-Code Stanwyck.  “She emerges, I think, as the greatest actress of 30s film, its most incorruptible spirit and natural wonder.  An actress who never reached for a false note or developed a litter of old reliables…Stanwyck seems almost indifferent to the luminosity of her eggshell skin, disdainful of her sexual command over dithering men as she dodges their inept lunges.  Her pre-Code films are condensed pulp novels, sagas of self-preservation that shoot from naturalism to melodrama with a single glance or fallen lock of hair.  Even at their most overwrought, Stanwyck refuses to let her good-bad girls writhe on a bed of nails.  She hasn’t a speck of vanity or its inverse showy masochism.  Her sanity is almost saintly in its transparent purity.  Her seen-it-all slouch, her righteous squalls of anger, her squint as she sizes up a fancy talker to see if he’s on the level (and the contempt that suffuses her face when someone tries to muscle her) her lunar shifts from cold detachment to beaming acceptance—only the young Bette David, before she became too mannered, could so convincingly and transfixingly sling herself around as if obeying some inner law…Stanwyck’s transformation in Night Nurse from sullen duty to wrathful outrage is so primal, it’s thrilling…” (Wolcott 202) 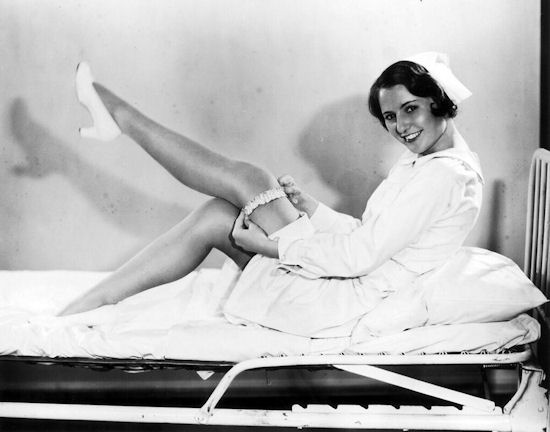