Mitchum charmingly plays a feral psychotic, who practices “the religion the Almighty and I worked out betwixt us.” Charles Laughton’s only film as a director is a fairy tale nightmare, as two children flee through a black and white dreamscape. “Is there an image more terrifying than the sight of Robert Mitchum, playing an unregenerate parson, soulfully singing ‘Leaning on the Everlasting Arms’ on horseback as he soullessly stalks two young children who are in possession of their father’s cache of bills?” (Carrie Rickey).

Laughton’s acting career reached a climax with the part of Quasimoto in The Hunchback of Notre Dame (1939). He’d created a decades’ worth of distinctively offbeat characters like Captain Bligh in Mutiny on the Bounty, the Emperor Nero in Cecil B. De Mille’s repellent Sign of the Cross and the mad vivisectionist Dr. Moreau in Island of Lost Souls. In the 1940s and 50s he alternated tours of staged readings with his character parts in films, including a popular one-man show of dramatic readings including the Bible, Shakespeare and Shaw titled Charles Laughton, Storyteller. He’d also directed and appeared in staged readings of Shaw’s Don Juan in Hell and Stephen Vincent Benet’s John Brown’s Body, when his theatrical producer sent him a slim volume written by a West Virginia advertising man, Davis Grubb.

The Night of the Hunter seemed to combine the extreme opposites William Faulkner and pulp horror author H.P. Lovecraft, “mixing an artistic tale of terror with gallows humor and experimental prose.” (Server). Laughton admired the book greatly, and wanted to involve the best-selling author in the filming process. When he realized Grubb had studied art, he encouraged him to draw scenes from the novel as a guideline for the filmmakers. James Agee, an insightful film critic who had written the screenplay for The African Queen was engaged to adapt the novel for the screen. His book, Let Us Now Praise Famous Men, evoked The Night of the Hunter‘s rural Depression setting, and was as important a factor in hiring him as his screenplay experience. Agee was reflecting on and writing about his own Tennessee childhood while writing A Death in the Family, which would be published posthumously. He was, however, also swiftly drinking himself into the grave. The rambling 350 page screenplay he produced was not only considerably longer than the book, but was completely unfilmable. Laughton had wanted an experienced screenwriter, but was, after all forced to rewrite it himself, which he did without credit, but apparently also without animosity towards the deposed Agee.

In order to find the tone he wanted for the film, Laughton and Agee had Museum of Modern Art screen many of D.W. Griffith’s silents for them. The visual look of the film, the poetic artifice, the use of symbolism, as well as the use of archaic devices such as the iris out evoke both Griffith, and the look of other silent masters such as F.W. Murnau. Laughton was reminded of his love for Lillian Gish, and how deeply he had been affected by her performance in Broken Blossoms. His reverence for Griffith’s work was a major reason Gish consented to act in the film. And his appropriation is successful, “Laughton didn’t so much borrow from Griffith; in some mysterious neo-Platonic sense, their souls united to create something unique.” (Callow).

The director’s first instinct had been to cast Gary Cooper as Preacher, a role he declined as detrimental to his career. Robert Mitchum was a Hollywood acquaintance whose hell-raising personality seemed perfect for the part. He’d been busted for pot several years before, which “had firmly established him in the public minds as a figure of thrillingly dubious morals, and made him, from that point of view, ideal casting as the psychopathic preacher.”(Callow). Laughton’s attraction to The Night of the Hunter was partly his loathing for organized religion. Robert Mitchum shared these sentiments. Producer Paul Gregory said Laughton was “anti-religious, absolutely anti-religious in the denominational sense and I think that it was a marvelous opportunity to show that God’s glory was really in the little old farm woman, and not in the Bible totin’ sonofabitch.” Elsa Lanchester, Laughton’s wife said, “they were kindred spirits, both what you call rebels, with no respect for formal religion or Hollywood society.” 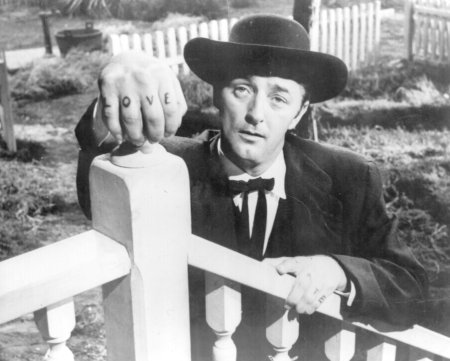 LOVE tatooed on one hand and HATE on the other.

Jane Darwell was mentioned for the part of Rachel Cooper, but Laughton’s immersion in the Griffith oeuvre made Lillian Gish the perfect choice. Gish idolized Griffith throughout her life, and was thrilled to think Laughton intended to bring something of his style back to the movies, writing of her “high hopes that Charles will usher in a new era in films, am thrilled to be part of it.” Although Gish grew up partly in central Ohio (Massillon), the banks of the Ohio River, the setting of the film, still had a warm familiarity to her. Rachel Cooper could have been a sappy character, but not in Gish’s hands. “Rachel is the uncorrupted core of reality and good sense in a world gone crazy with greed and religious fanaticism.” (Affron). Or, as Simon Callow more colorfully put it, “her scrubbed sturdy radiance and power of nurture are the perfect polarity to Mitchum’s greasiness.”

The children were professional actors, but extremely natural in their roles. Laughton, who generally loved teaching, had a run-in with Billy Chapin while coaching him for his part. “Do you think John’s frightened of the Preacher?” “Nope.” “Then you don’t know the Preacher and you don’t know John.” “Oh, really?” said little Billy Chapin, “That’s probably why I just won the New York Critics’ Circle Prize.” This comeback so infuriated Laughton that Mitchum took over some of the direction of the children himself.

Shelley Winters played Willa Harper. Winters, typecast for cheescake appeal in most of her early films, was a student in Laughton’s advanced acting classes and he took her talent seriously when few others did. “When the studios told me I was a hunk of meat, a blonde bombshell, he made me understand I was an artist and a human being and I could demand respect and dignity.”

The director of photography was Stanley Cortez, whose previous masterwork had been Orson Welles’ The Magnificent Ambersons. Having been an assistant to the portrait photographer Edward Steichen, he was unafraid of the word “art” often considered anethma in the movie business. The Night of the Hunter is a film of exceptionally original photography, some of it obtained by using extremely fast black and white film, with minimal lighting. Cortez said of Laughton, “He was such an inspiring figure. You were ready to do all you could to give him what he wanted.” And, “Apart from Ambersons, the most exciting experience I have had in the cinema was with Charles Laughton on The Night of the Hunterevery day I consider something new about light, that incredible thing that can’t be described. Of the directors I’ve worked with, only two have understood it: Orson Welles and Charles Laughton.” Several of the striking deep focus scenes do evoke immediate comparisons with Welles. Every image is meaningful, and not a frame is wasted. 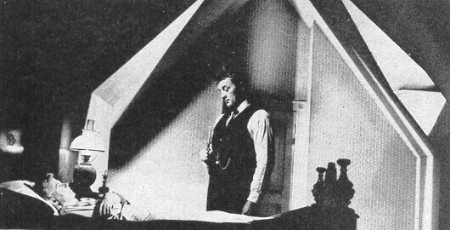 The cast and crew worked harmoniously in collaboration. Even the composer was often on the set, so he could see the work in progress. Mitchum felt Laughton was the best director he ever had, and that Preacher was his best part. Laughton had no more felicitious experience in his professional life.

This print has been delictably restored by the UCLA film archive (thank you for the loan, Todd Wiener!) Originally, I had hoped to show a program that was featured in their recent restoration festival. The archive, under the director of Robert Gitt, has for the last 20 years been resplicing and sound-syncing over 8 hours worth of rushes from The Night of the Hunter left on the cutting room floor. Counter to usual Hollywood practice, Laughton would often keep the camera running in between takes to keep his cast in the mood. But, when presented by UCLA, Mr. Gitt, himself had to walk the audience through the outtakes, not yet assembled into permanent form. But, here’s how they were tantalizing described in the LA Times article: “To watch these outtakes is to feel almost present at the creation of a classic motion picture. We hear Laughton reading off-screen lines for his actors, calming them down when they flub things, being incredibly patient with child performers Billy Chapin and Sally Jane Bruce, and best of all giving simple but incisive advice like, “a little more lyrical, more personal” and “darling, it’s a little too firm” in his soothing voice. As an intimate portrait of a director fully on his game, these sequences are unmatched.” It’s hard to believe that, when donated to the American Film Institute in 1974 by Laughton’s widow, Elsa Lanchester, AFI students began cutting them up to use as blank leader for their student films!

The audience at the North Carolina Museum of Art screening reacted with both terror at Mitchum’s intense performance and amusement at the almost slapsticky changes in tone. But, how to react to the poetic dialogue, the symbolic river journey? The film is stylistically audacious, with almost every scene like a beautifully composed still photograph. There is no other movie like this one.

In the August-September issue of Films in Review, The Night of the Hunter was assessed along with Hitchcock’s To Catch a Thief, John Ford’s Mister Roberts, Orson Welles’ Othello and The Seven Year Itch. Can you imagine a such a month of classic films being released today? Laughton’s film was not a commercial success, and Laughton’s distress over its failure doomed his directorial career. It took twenty years for this hauntingly original film to assume its place as a classic. Surely the creators of To Kill a Mockingbird were influenced by its mysterious black and white childhood centered universe. “Laughton’s failure to make another film is a serious loss to the history of the movies, but his one masterpiece continues to inspire those who share his sense of the expressive possibilities of the medium.” (Callow). “Night of the Hunter is one of the most unclassifiable films ever madea film of looming Expressionist shadows, homespun back fence chatter, psychopathic sexual craving and victorious maternal wisdom.” (David Eherenstein)

(Photo of Mitchum from Jerry Ohlinger’s Movie Material Store, other from Films in Review. Sources include Night of the Hunter by Simon Callow, Robert Mitchum: Baby, I Don’t Care by Lee Server, Shelley II The Middle of My Century by Shelley Winters, Robert Mitchum: A Bio-Bibliography by Jerry Roberts, Robert Mitchum by George Ellis, Charles Laughton by Simon Callow, Lillian Gish: Her Legend, Her Life by Charles Affron, The Movies, Mr. Griffith and Me by Lillian Gish, The Films in My Life by Francois Truffaut).