Spectators who go to movies lead normal lives. But they go there to see extraordinary things, to see nightmares. For me, the cinema is not a slice of life but a piece of cake.–Alfred Hitchcock

The innocent man wrongly accused + the cool blonde temptress + the heartstopping climax = classic Hitchcock. An advertising executive having a drink at the Plaza Hotel is mistaken for a spy and finds himself running for his life from a crop duster in a deserted Midwestern cornfield and skittering off the giant heads of Mt. Rushmore. “North by Northwest is rightfully acclaimed as Hitchcock’s greatest comic thriller” (Paul Condon and Jim Sangster). 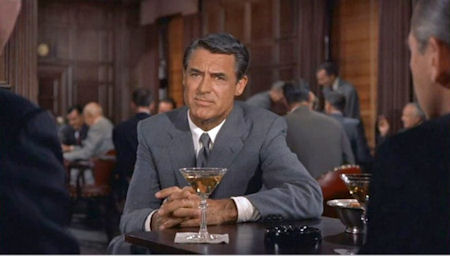 Alfred Hitchcock filmed North by Northwest during one of his most fertile creative periods, in between the obsessive mania of Vertigo and the taboo-shattering Psycho. Now, when Hitchcock is considered to be one of the greatest directors in film history, it’s hard to imagine that during his career he was considered to be a purveyor of fluff. The account in Films in Review was typical, “By this time, it’s bromidic to say an Alfred Hitchcock film is wonderful while you’re in the theater, and impossible to remember 24 hours later. I wish I could say something more for North by Northwest.” Ellen Fitzpatrick was “unable to say anything on its behalf culturally.” It took the young French iconoclasts like Francois Truffaut to force serious consideration of his work into the intellectual mainstream.

Hitchcock met writer Ernest Lehman during a series of conferences for a picture that was going nowhere, The Wreck of the Mary Deare. Lehman finally told Hitchcock he should find another writer for the project, but was told, “Don’t be silly. We get on very well. We’ll do something else.” Lehman imagined “The Hitchcock picture to end all Hitchcock pictures. I want it to have wit and glamour and movement and changes of locale.’ One day he (Hitchcock) said, ‘I’ve always wanted to do a chase across the faces of Mt. Rushmore.’ That’s what he said. I said, Gee, that’s exciting, and wrote it down, but who was chasing whom? That’s the way it all started.”

The two of them mulled over a series of seemingly disconnected ideas and began to shape a script from them. MGM still thought they were working on The Wreck of the Mary Deare. “How’s it going, Skipper?” Lehman was saluted on the lot. Meanwhile, Hitchcock placated the studio by telling them he was doing another picture first, and they thought he would stay for two films. Hitchcock called the plot motivation, in this case a race for government secrets, the McGuffin, and said this film had the most perfect one “the emptiest, the most nonexistent and the most absurd.”

Lehman embarked on a research trip to embellish his ideas. He loitered around the United Nations and had a Long Island judge go through the motions of busting him for DWI. He followed a Park Ranger up Mt. Rushmore, until he chickened out, handing his guide a camera to snap the top. No fiction film could be shot at the UN, so it was reconstructed in the studio, except for a small scene captured from a hidden camera in the back of a truck. The Park Service wouldn’t allow filming on Mt. Rushmore either, deciding that espionage-related violence was detrimental to the monument’s dignity, so that sequence, too, was on a stage. The seven-minute crop duster scene has no dialogue and was edited without the speed often used to increase tension. The slow cuts really let you see what is happening in a blinding bright open field, the opposite of film noir’s shadowy alleys. 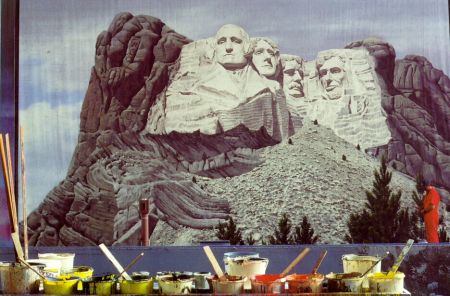 During his career Lehman got 5 Oscar nominations, writing the screenplays for Sabrina, The King and I, The Sweet Smell of Success, West Side Story and the Sound of Music among others. Pillow Talk beat out North by Northwest for the screenwriting Oscar, yet another example of Oscar’s obtuseness. 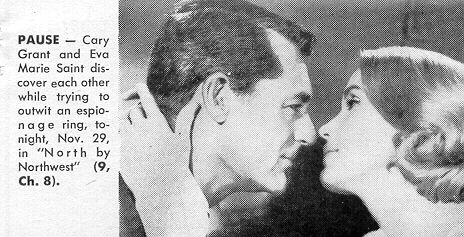 I cut this clipping out of a newspaper tv guide when I was a teenager.

At first, Hitchcock couldn’t decide if Roger Thornhill should be played by James Stewart or Cary Grant. Grant was cast for several reasons, one of which was that Lehman had written a lot of dialogue, and worried that Stewart would have taken so much longer to say it all. The tone of the film owes much to Grant’s sophistication and graceful star image. He and Hitchcock worked together so often that Hitchcock would (uncharacteristically) accept suggestions from him. Jessie Royce Landis, who plays Grant’s mother, was almost a year younger than he was, an interesting comment on how actors and actresses were allowed to age in the movies.

MGM had hoped to star Cyd Charisse with Grant, but Hitchcock surprisingly chose Eva Marie Saint, a Method actress best known from her role in On the Waterfront opposite Marlon Brando. She “had not been up to then associated in any way on screen with glamour, sophistication or sexiness.” (Taylor). Hitchcock personally selected her wardrobe at Bergdorf Goodman. “Hitch was a big bear,” Saint said in an interview. “He didn’t like the wardrobe that Helen Rose had designed, so he brought me to New York and as the mannequins came by I’d say, ‘Oh, Hitch, I love that black dress with the big red roses. He’d snap his fingers and say, ‘We’ll take that for Miss Saint, please! He was my one and only sugar daddy. Hitch was so meticulous, he knew what he wanted for every shot(He worked) externally–“lower your voice, don’t use your hands (I tend to use my hands a lot) just look at CaryWith a Hitchcock film, you just jumped in and had a hell of a good time. I mean, who doesn’t want to play a sexy spy?” 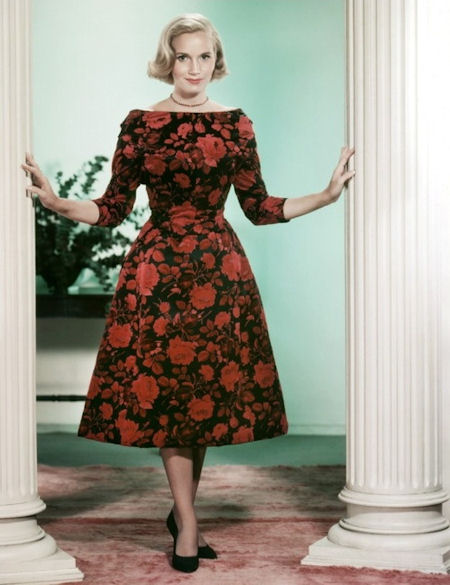 Hitchcock split the evil amongst several bad guys (James Mason is the leading one) to show both the unrelenting and more human sides of villainy. Martin Landau (in his second film) plays the wicked Leonard with a veneer of what was called sexual deviancy in the unenlightened 1950s. This was perhaps his flashiest role before his 1960s tv success in Mission Impossible. No actor worked more with Hitchcock than Leo G. Carroll, who was in 6 of his films. 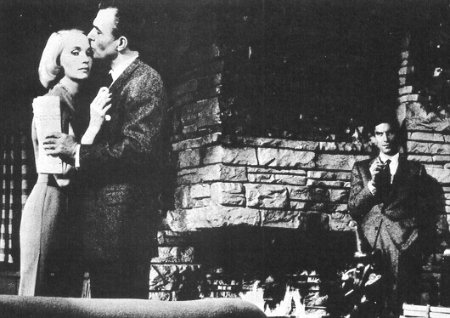 North by Northwest contains echoes of Hitchcock’s previous films, principally The Thirty- Nine Steps, Saboteur and Notorious. The Cold War tension during the last year of Eisenhower’s presidency provides the backdrop for this romantic comedy adventure. “While we’re at it, one can attribute pretty much every ‘man on the run’ action film since 1960 to North by Northwest” (Condon and Sangster). As promised, the Hitchcock picture to end all Hitchcock pictures.

(Photo with Saint, Mason and Landau from The Heavies (1967) by Ian and Elisabeth Cameron. Mt. Rushmore from Smithsonian exhibition catalogue Hollywood: Legend and Reality edited by Michael Webb. Newspaper clipping saved from the Cleveland Press in the late 1960s by Moviediva. Sources include the invaluable Hitchcock/Truffaut, The Complete Hitchcock by Paul Condon and Jim Sangster, Hitch by John Russell Taylor, North by Northwest from the Rutgers Films in Print series edited by James Naremore, an interview with Ernest Lehman by Joel Engel in the Winter 2000 Spectre, an interview with Eva Marie Saint in the May, 1983 Films in Review and the review of North by Northwest in the August-September 1959 Films in Review. Also Perspectives on Alfred Hitchcock, edited by David Boyd, particularly the essay by Lesley Brill, “North by Northwest and Romance.”