“Ever adaptable, Dracula has been a literary Victorian sex nightmare, a stock figure of theatrical melodrama, a movie icon, a trademark, a cuddle toy, a swizzle stick and a breakfast cereal.” (David J.Skal, Hollywood Gothic).

Max Schreck played Count Dracula, not like Bela Lugosi’s suave nobleman, but as a vile, rat-like living corpse. Bram Stoker’s Dracula has been “undead and in print” (James Craig Holte) since first published in 1897. This early film version of Stoker’s novel is a waking nightmare, an undisputed masterpiece of horror. If Willem Dafoe’s bravura performance as Schreck in Shadow of a Vampire whetted your appetite for the source, behold the vampire: Nosferatu.

Bram Stoker wrote Dracula just over 100 years ago, and the novel made him as immortal as his creation. After Stoker’s death in 1912, his impoverished widow, Florence, fiercely guarded her one real asset, Dracula‘s copyright. Nosferatu was the brainstorm of “ardent spiritualist”, Albin Grau, whose entirely recognizable adaption of the famous story intended to evade this copyright. Florence Stoker was incensed. Her lawsuit almost succeeded in driving a fatal stake through the heart of Nosferatu, as she demanded (unsuccessfully) every print be destroyed. She pursued this goal unflaggingly, even as the rights were being negotiated for a talking picture, based on the various legal stage adaptions. The success of Nosferatu made her estate more valuable than ever before. Florence Stoker never saw Nosferatudid not wish to see it. “In the case of Nosferatu we have one of the few instances in film history, and perhaps the only one, in which an obliterating capital punishment is sought for a work of cinematic art, strictly on legalistic grounds, by a person with no knowledge of the work’s specific contents or artistic merit.” David J. Skal continues, “Nosferatu mined Dracula‘s metaphors and focused its meanings into visual poetry. It had achieved for the material what Florence Stoker herself would never achieve: artistic legitimacy.” Ironically, Bram Stoker never properly registered Dracula‘s copyright in the US, where it turned out always to have been in the public domain.

Director F. W. Murnau is one of the great geniuses of silent film, and Nosferatu his first masterpiece. It was created on a shoestring using real locations, like the deserted streets of Wismar, Rostock and Lubeck, and the 13th century castle Oravsky Zamok, rather than the stylized sets seen in films like Robert Weine’s The Cabinet of Dr. Caligari. The character names were changed, and the plot of Stoker’s lengthy novel reduced to bare bones. Grau’s production designs lavished attention on details like the arcane symbols used in a letter Count Orlock uses as an oracle, as well as the vampire’s make-up. Murnau’s shooting script is at the Cinematheque Francaise, and clearly much improvisation occurred during shooting. Max Schreck (his name means “fear” in German) was thought by some to be the alter-ego of another actor (perhaps Alfred Abel). He was surely not a vampire himself, as suggested in the recent film, Shadow of a Vampire. Primarily a stage actor (for Max Reinhardt, perhaps how Murnau met him) he made a little over a dozen films. His repellent appearance remains the most startling aspect of Nosferatu. 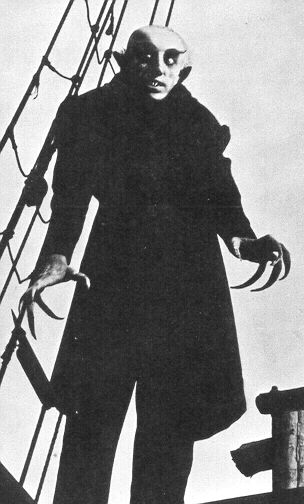 In 1948, Theodore Huff wrote an index to Murnau’s films, bolding stating that his work contained all that was known of F. W. Murnau. His biography consisted of a scant 2 pages. Murnau was reticent about his personal life, and it is not difficult to read between even these few lines to discern that a desire to conceal his homosexuality was a cause of his discretion. Born Friedrich Wilhelm Plumpe, he adopted the last name Murnau as an homage to the spiritual home of the Expressionist painters known as Der Blaue Reiter. He had been entranced by the theater since childhood, and after service in WWI, perhaps as a pilot, he joined Max Reinhardt’s famous Deutsches Theatre, where he both acted and directed. While living in Switzerland, the German Embassy asked him to stage some propaganda films for them, initiating his film career. Between 1919-23 he made 12 features for independent film companies, most of which have been lost.

Huff wrote, “Murnau wanted to make absolute films like absolute music; was interested in form and pictorial effects. A screen painter, his love for the camera is shown in his earliest work. The boundry line between reality and fantasy is very thin even in his realistic films, giving them the universality of a fable or ballad.” Murnau’s German films were greatly admired and include The Last Laugh, a visual tour de force shot without a single title. He came to the US and made Sunrise, considered to be one of the greatest films of all time. After collaborating uneasily with documentarian Robert Flaherty on Tabu (1931) Murnau died tragically in an automobile accident. He was only 42.

Like many silent films, Nosferatu had an orchestral score to accompany the original screenings, this one written by Hans Erdmann. The Alloy Orchestra (Ken Winokur, Terry Donahue and Roger C. Miller) played their original music for the screening at the North Carolina Museum of Art. Along with their “rack of junk,” synthesizer, and a veritable percussive encyclopedia, Donahue also played both accordion and musical saw for deliciously eerie effect. Miller told me that Nosferatu is his favorite of the Alloy’s scores, he called it “deep,” especially when the film is shown more slowly at the correct speed of 18 fps (the NCMA was forced to show it at sound speed of 24 fps).

Nosferatu exists in a dream-like world where he can indulge his unrestrained hunger for sex and violence. Skal writes of the film, “Modern culture and its complexities are banished; in sharp contrast to Dracula–a very up to date book for its time–Murnau’s film is decidedly preindustrial, almost medieval in its preoccupations.” The old Janus Films catalogue from the 70s sums up, “Murnau’s vampire stands alone as the most repugnant and loathsome figure to be encountered in the cinema.”

(Photo from the Janus Films catalogue. As you can see, I really like David J. Skal’s Hollywood Gothic; indeed, all his books are lucid, insightful and hilarious. I think he goes a little overboard on the Spanish Dracula, but he’s entitled. Other sources include James Craig Holte’s Dracula in the Dark: The Dracula Film Adaptions, Theodore Huff’s August, 1948 Sight and Sound Supplement: Index to Murnau’s Films, The Film Encyclopedia by Ephraim Katz and the BFI monograph on Sunrise by Lucy Fischer. Lotte Eisner’s biography of Murnau was supposed to be in the Duke Library, but evidently dematerialized.

Why have the last couple of years brought two riffs on Murnau and Nosferatu, Jim Shepard’s novel of that name and Shadow of a Vampire? Shepard’s blend of fact and fiction is disconcerting, especially when he makes a mistake like stating that Murnau had seen Douglas Fairbanks Thief of Bagdad, several years before it was made. And speculative dialogue makes me uncomfortable, even though Shepard has a long list of references to give his fiction veracity. Shadow of a Vampire makes the same sort of factual mistakes, but I thought it really conveyed the creative fever of silent film creation, and Willem Dafoe should have gotten the Oscar for his great performance as Shreck.)