A woman’s tainted reputation as a heedless party girl makes her vulnerable to coercion; she’s forced to spy on malingering Nazis in Rio.  Bergman’s sizzle and Cary Grant’s disquieting charm jigsaw with crackerjack plotting and spectacular camerawork into one of Hitchcock’s best. “The film’s thriller format and romantic story (achieve) dizzying, expressive and unique effect… A great film. (Time Out).

For me, Notorious was a hard Hitchcock movie to love.  Cary Grant is so charming, but so unscrupulous.  He exploits Ingrid Bergman’s vulnerability in an unsettling way.  They kiss, but is it love?  But, it was Francois Truffaut’s favorite Hitchcock film.  It’s hard to imagine, but during most of his career, Hitchcock was treated merely as a manufacturer of popular entertainments.  Contemporary reviews of his films say in effect, “just another Hitchcock film.”  But Truffaut and his French colleagues at Cahiers du Cinema considered him to be an artist, and Truffaut’s book Hitchcock/Truffaut, which I recommend highly both as a book, and as a recent documentary film, changed the conversation about his work, recognizing him as the genius of cinema we acknowledge today. 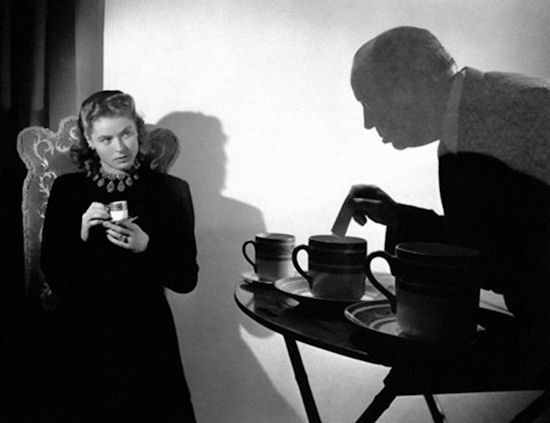 Director Alfred Hitchcock and playwright and screenwriter Ben Hecht had just finished Spellbound, with Ingrid Bergman (and Gregory Peck) for producer David O. Selznick.  Hitchcock and Hecht both owed Selzinick another picture, and found inspiration in a 1921 Saturday Evening Post serialized story about a Mata Hari-esque spy.  Selznick owned the rights already, which gave the duo a chance to name check it and then change everything.  In Hollywood, Hitchcock knew several people who had been recruited by British intelligence to seduce suspected German agents for information.  Grant also had wartime contacts with the FBI, which used him as a source.  Hitchcock and his screenwriter speculated about would happen to those loyal to the Nazi ideology after the war was over.

They enjoyed collaborating on the script, even if they couldn’t quite land on the “Maguffin” which would propel the plot.  The plan to show Nazi refugees training in secret camps in preparation for triggering another war was quickly abandoned.  The script takes place after the war (and was filmed then), but it was plotted beginning in 1944, before the uranium bomb had become public knowledge.  Hitchcock had heard rumors, perhaps though his Hollywood intelligence friends.  Hitchcock and Hecht had visited a nuclear physicist, Dr. Robert A. Millikan at Cal Tech, who warned them to stay away from the still classified information.  By the time a skeptical David O. Selznick sold the Notorious package (Hitchcock/Hecht/Bergman) to RKO, fears about unregenerate and escaped Nazis had begun to pervade the popular culture, and the atomic bomb had been dropped on Japan. 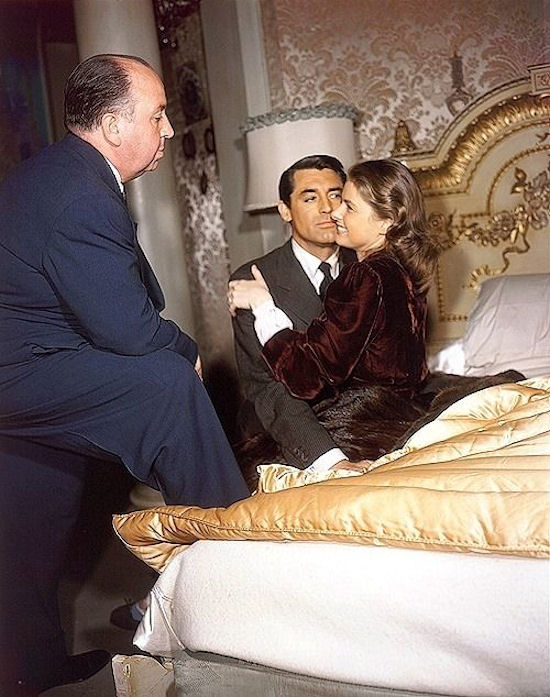 Hitchcock charmed the Production Code officials into approving a long kiss (interrupted and resumed) and agreed that Alicia could be an unchaste heroine.  In her autobiography, Bergman recalled:  “A kiss could last three seconds.  We just kissed each other and talked, leaned away and kissed each other again.  Then the telephone came between us, then we moved to the other side of the telephone.  So it was a kiss which opened and closed, but the censors couldn’t and didn’t cut the scene because we never at any one point kissed for more than three seconds.  We did other things: we nibbled on each other’s ears and kissed a cheek, so that it looked endless, and became sensational in Hollywood” (Bergman 161).  Hitchcock said that this kiss is a gift for the audience, so they could feel as if they themselves were kissing Cary Grant or Ingrid Bergman. 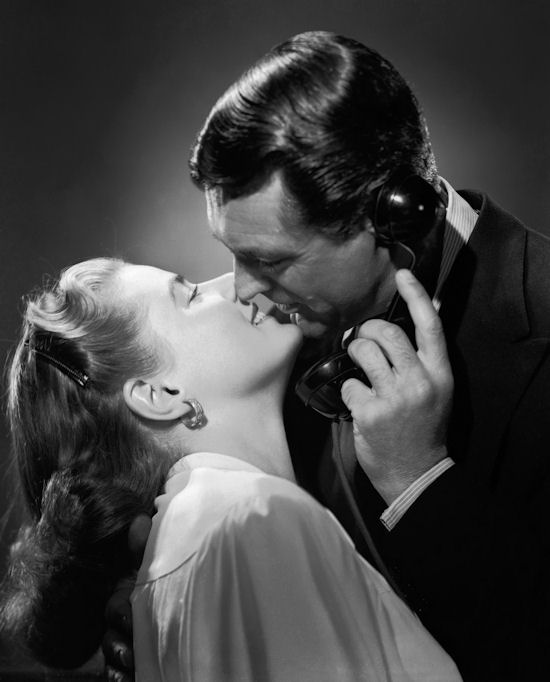 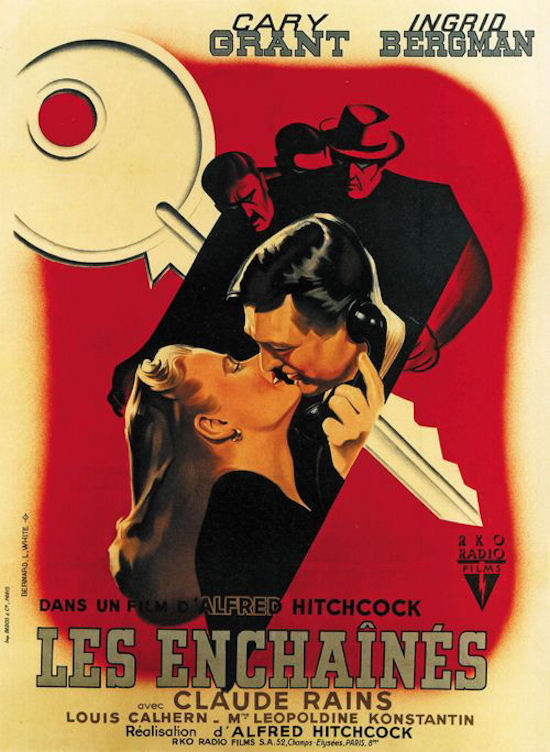 Part of a star’s contract was posing for publicity stills, some of which would be repurposed for poster art.

Ingrid Bergman was an only child.  Her father was a painter who ran a camera shop, he was 13 years older than her mother.  Her mother died when she was three, and her father when she was twelve.  She lived with relatives who disapproved of her desire to go to drama school, but she prevailed, and by the age of 19, she was making movies in Sweden.  Her breakthrough film was Intermezzo, about an affair between a married violinist and his young student.  Hollywood lore says that producer David O. Selznick’s New York representative, Kay Brown, worked in a building with a Swedish elevator operator, who told her about a wonderful film he had seen piquing her interest, and then her boss’s.  Soon, Bergman would arrive alone in California, a one picture contract in hand (so she could return to Sweden if things didn’t work out) even though she already married to a dentist, and with a small child.

Bergman and her husband, Peter Lindstrom were personal friends of the Hitchcocks, and Hitchcock crafted the character of Alicia for her.  “Bergman was tired of playing saints, and in Notorious she got her chance to play a shame ridden boozer, willing to sleep with the devil in order to wash away the stain on her conscience”  (McGilligan 376).  She was at the peak of her career, having won the Oscar for Gaslight in 1944, and having just starred in a string of hits, including Casablanca. 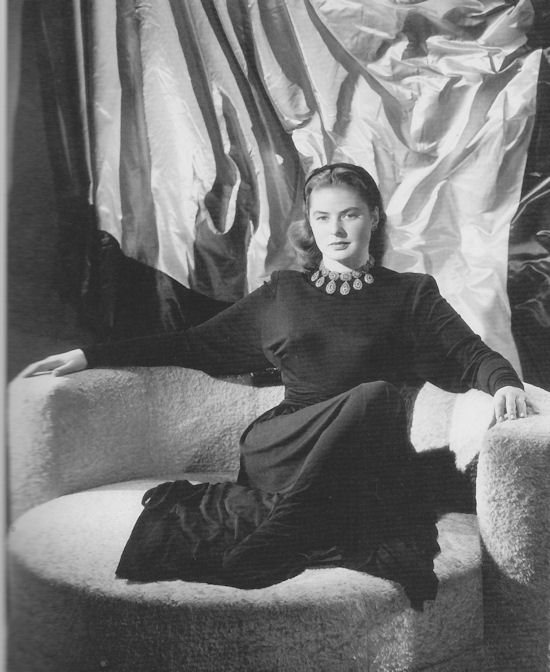 Cary Grant (Selznick had wanted his contract player, Joseph Cotton to star, another reason for Hitchcock’s wanting to evade working for him) also played a character unlike his confident screwball comedians, but a man struggling with his demons.  Hitchcock was the first director to use Grant’s beauty as a mask, tapping into Grant’s uneasiness with his screen image.  “Cary Grant” was pure fiction, created from Archibald Leach, from Bristol, England in 1904. His parents were unhappy, and money was scarce.  His father deserted them, and his mother died when he was 10.  Three years later, a fortuitous friendship with an assistant teacher who was also a stage electrician brought him behind the scenes at a theater. As soon as he could legally quit school, at 14, he joined the Bob Pender Group of Acrobats, and over the next few years acted in skits, stilt-walked, tumbled and danced on tour throughout Britain. He arrived in the US and worked on stage in New York before landing a Paramount contract in 1932. Grant honed his dapper persona in New York, as an escort for older, cultured ladies, learning to imitate in dress, speech and manner, what he might have considered his “betters.”

Claude Rains reinvented himself as much as Grant did.  William Claude Rains was born in London in 1889, on what he called “the wrong side of the Thames” (Stein 513), one of three survivors of 12 children who died in childhood of poverty-related diseases. His father was unsuccessful at several professions, including silent film actor, and the family was extremely poor.  Willie Rains ran away from home at the age of 9 and joined a boy choir, his voice was beautiful, even if he had a Cockney accent, a lisp, and pronounced his “r” as “w.” At 11 years old, the choir performed in a stage play, and Rains decided firmly he wanted to be an actor.   He worked backstage, building sets and holding prompt books, and then was promoted to stage manager by the time he was 18.  Sir Herbert Beerbohm Tree, whose troupe called His Majesty’s Theatre home, mentored Rains and helped him with speech to overcome his speech defects, so he could pursue his dream. He made his stage debut in 1911, and began working steadily on the English and American theater.  In 1932, his current troupe was forced to disband because of the Depression and he despaired of the movies because “I wasn’t the collar-ad type” (Stein 515). Unexpectedly, in spite of being a short, stocky man in his early 40s, he was a movie star beginning with The Invisible Man. He would star in many memorable films besides Notorious, including The Adventures of Robin Hood, Now Voyager, Mr. Smith Goes to Washington, and Casablanca.

Claude Rains, superb as men with a compromised moral compass, did the impossible, create a sympathetic Nazi, simultaneously a member of the “Master Race” and a cowed mama’s boy.  Hitchcock had originally wanted Clifton Webb, a gay actor renowned for his affection for his mother.  Rains was several inches shorter than Bergman, and Hitchcock conspired to make them look a similar height, with raised platforms and elevated shoes (this was something Bergman was quite used to with many of her other co-stars).  He earned his fourth and last Oscar nomination for this film, and lost for the fourth time, this time to Harold Russell, a real-life amputee playing a part similar to his own life’s story in The Best Years of Our Lives.   I, personally, would give an Oscar to Claude Rains, anytime.

Hitchcock loved giving work to ardent anti-fascists in Hollywood, and they play many of the smaller roles.  British diplomat Charles Mendl plays the yachtsman who invites Alicia to Cuba, somewhat of a spy himself, it must have been one of Hitchcock’s little jokes for him to play a fleeing fascist.  Leopoldine Konstantin, who as a young woman graced the Berlin theater would play her only role in an American film as Rains terrifying mother.
Notorious contains some of Hitchcock’s most remembered shots, like the zoom into Alicia’s keys, courtesy of Ted Tetzlaff.  But additional help was provided by Citizen Kane photographer Gregg Toland who was sent to Brazil for some background photography to be used to evoke Rio de Janeiro; of course the whole thing was shot in the studio. 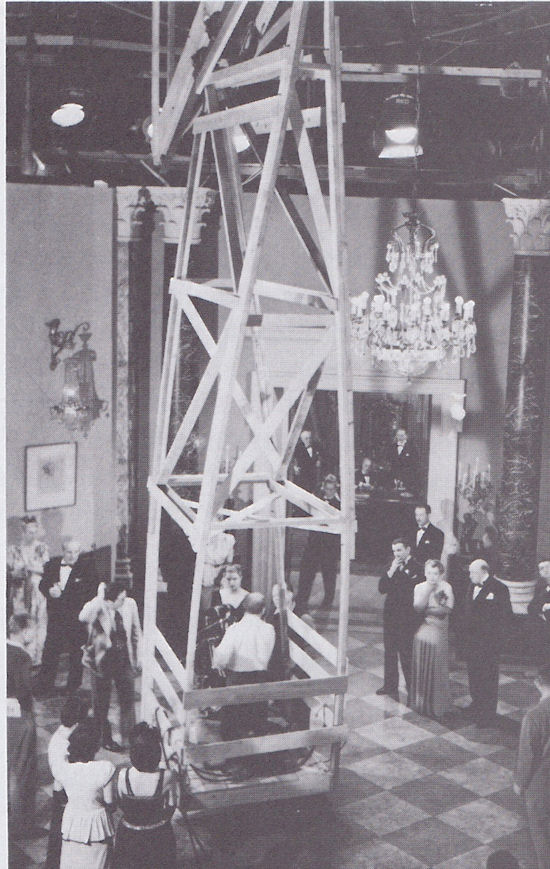 This would be the first time Hitchcock worked with Paramount costume designer Edith Head, who contributed so much to his films over the couple of decades.  He cared deeply about the costumes; he wrote what he wanted right into the script, in this case, all black and white clothes. Head remembered, “Hitchcock is a director who dominates every single scene of his pictures, even to fashion.  The job was tricky.  The clothes couldn’t be smart in the ordinary sense.  They had to avoid the fussy and extreme.  And they had to be right for her (Bergman).  Some women need accessories galore—jewels, furs feathers, silly hats—to look glamorous—all the things she hates.  She looks marvelous in plain things—a smock, or a blouse and shirt, or a schoolgirl’s tailored dressing gown.  Her clothes must have simplicity, skillful design and practically no ornamentation.  This is elegance in the subtlest sense”   (Jorgensen 117). When we meet Alicia, she is wears a daring zebra print midriff baring blouse, dusted with black sequins, to demonstrate her wild abandon and unpredictability.    Once she goes undercover, her clothes conceal instead of draw attention.  Her sleek black evening gown looks modern even today.

In 1981, Head was dying of cancer, and thought that she would never work again. She was still under contract to Universal however, and they asked her to do a little job for them, design four outfits for Rachel Ward for Dead Men Don’t Wear Plaid. When that went well, they asked her to do Martin’s clothes, as well. Then it occurred to Reiner that he would need some duplicates of the dresses used in the old clips. He naively asked, “Could you do a dress like Ingrid Bergman wore in Notorious?” “I designed Notorious,” she told him (Chierichetti 216). 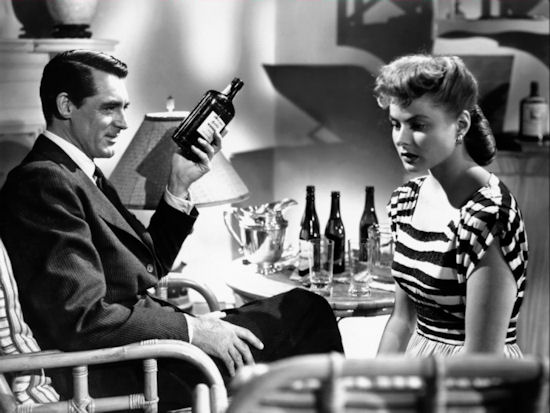 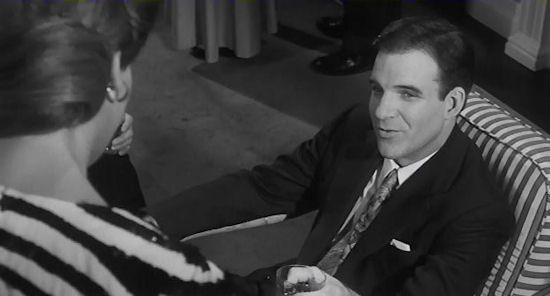 Francois Truffaut relished the opportunity of discussing his favorite Hitchcock film with the director.  “Notorious is the very quintessence of Hitchcock” he believed (Truffaut 167).  Truffaut felt it had “at once a maximum of stylization and a maximum of simplicity” (ibid 170).  “The story of Notorious is the old conflict between love and duty.  Cary Grant’s job—and it’s a rather ironic situation—is to push Ingrid Bergman into Claude Rains’s bed.  One can hardly blame him for seeming bitter throughout the story, whereas Claude Rains is a rather appealing figure, both because is confidence is being betrayed, and because his love of Ingrid Bergman is probably deeper than Cary Grant’s.  All of these elements of psychological drama have been woven into the spy story.” 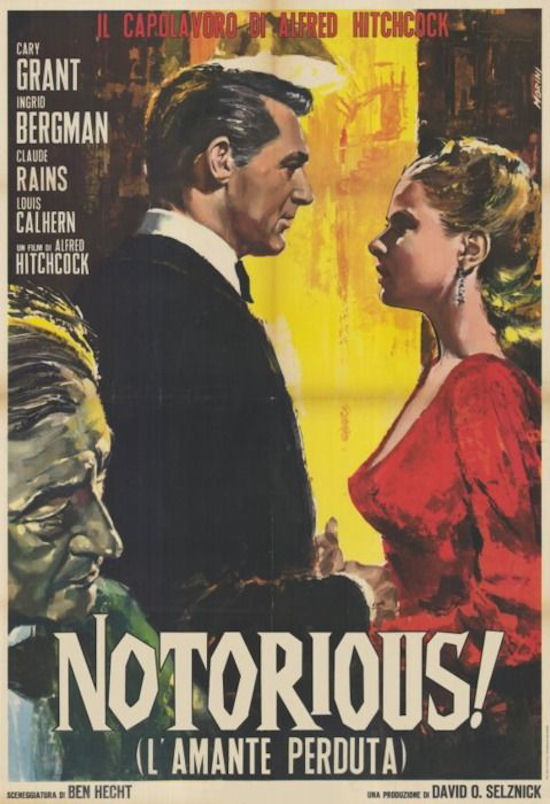 Photos include: the keys to the cellar from Dufreigne, The zoom shot from Hitchcock/Truffaut.