Cairo: 1955.  Devil may care secret agent OSS 117 (Oscar’s Best Actor for The Artist in 2012, Jean Dujardin) has a merry laugh and wildly arching eyebrows.  His assignment, tackled with knuckleheaded brio, is to prevent a Russian arms shipment from reaching a Muslim extremist group.  Inspired by a legit series of  French spy novels, and the serious films adapted from them,  Agent 117 intends to “make the Middle East safe” for succeeding generations and does just the opposite. Dujardin is hilarious as Agent 117, natty in his Connery-ish suits and slicked back hair, a spy who doesn’t smoke, can’t hold his liquor, and doesn’t care much for the ladies, either. Writer-director Michel Hazanavicius has a keen eye for clichés, the slightly washed out Eastmancolor, the cheesy back projection, the predictable music, as well as slyly prodding James Bond’s fussy suavity into comedy. Best of all, the satire has a point: patronizing colonialist attitudes and undercover manipulations by agents like Bond and his ilk created today’s global mess.  “A deadpan, borderline brilliant satire of postwar spy movies” (Salon.com)

The first James Bond novel, Casino Royale, by Ian Fleming, was published in 1953.  Up until then, thrillers had been sexy and violent (Mickey Spillane style) but Ian Fleming brought something new, refinement.  Bond may have brought rough language and casual sex to the British crime novel (expanding on the international villainy of earlier series such with heroes and villains like Bulldog Drummond and Fu Manchu) but he was decidedly upper class, as was his creator.  Fleming’s family was, and is still, in banking.  He went to Eton, attended the Royal Military Academy at Sandhurst, joined Reuters news service as a young man and during WWII became part of Naval Intelligence. His background gave his books a decided authenticity.  The details in this first novel, where Bond checks a room for bugs and turns up the radio to foil eavesdroppers are now cliché, but they originated with Fleming’s real-life spying experience.

Fleming continued his series throughout the 1950s, and even though they appeared cinematic, they were thought impossible to make into films.  Too British to appeal to American audiences (it was thought) and too expensive for any British studio to undertake.  Casting the part of Bond was (and continues to be) contentious.  Fleming preferred actors too old for the part (like David Niven) and younger actors, like Roger Moore and Patrick McGoohan (from tv) didn’t seem quite right.  Sean Connery was not everyone’s choice, in part because of social prejudice—he was too lower class.  He didn’t own a three piece, Savile Row suit until the producers had him fitted for one (and director Terence Young advised him to sleep in it, so he would be completely at home). But, Connery’s rough edges were one of the things that made James Bond’s character so vibrant on screen.

Although OSS 177 was sometimes considered an heir to Bond, Jean Bruce wrote 88 OSS 117 novels beginning in 1949, predating Casino Royale by four years.  Hubert Bonisseur de La Bath is supposed to be an American Colonel of French descent from Louisiana, working in the OSS during WW II and then the CIA.  After Bruce died in an automobile accident (in 1963) his widow, and then his daughter and her husband continued the series, the last of which was published in 1993. Altogether, they have sold 24 million copies.  The books had punchy titles, like Cache, Cache in Kashmir (Hidden in Kashmir) and Double Bang in Bangkok, and the kind of lurid cover art that attracts both readers and collectiors.

Doctor No in 1962 began the craze for all things Bond. Yet, the first film featuring OSS 117, OSS117 N’es Pas Mort (Is Not Dead) was made in 1957—predating the first James Bond film by five years. Here is the trailer: http://www.youtube.com/watch?v=Isz4yifzhzY&feature=related During the early years of the James Bond craze, there was a “Eurospy” series, in which OSS 117  made an appearance amongst various other continental secret agents, in seven films made between 1963 and 1971. Countries all over the world began to make films with super villains, lairs, scantily clad minxes and futuristic gadgets. I would love for someone to program an International Bond series, I’ve seen a bunch of the Bollywood ones, and they are spectacular.

Jean Francois Halin, who collaborated on the screenplay of Cairo Nest of Spies, was struck by the colonialist era racism of the novels.  OSS 117 is an agent who tries to bulldoze Western values over what he views as “backwards” countries.  A hero is still a hero, though.  He’s described, according to Google translate (and myself):  “La Bonisseur Hubert Bath had the strapping build of an athlete at the top of his form, his face weathered and energetic as a prince of pirates.  His clear gaze, with quiet irony, rested on people and things with the confidence of a life filled with bold adventure.  His charm left no woman unaffected.”

I discovered much to my surprise (but why should I be?) that there is a whole genre of “James Bond studies” which generates conferences and scholarly papers.  They make much of the “sex, sadism and snobbery” that is the hallmark of Bond. Yet, there is realatively little about other superspies of the era.

Jean Dujardin is only one of two actors in history (the other is Christopher Waltz) to win the Cannes prize for Best Actor, the SAG Award, the Golden Globe and the Oscar for the same film.  He’s an actor and comedian, who worked with a troupe of sketch comics in, what I intuit from You Tube to be an SNL type of show, Nous C Nous (not a boy band, as erroneously reported by the NY Times).  He appeared in a sitcom, Un Gars, Une Fille (A Boy, A Girl) from 1999-2003, which has an interesting concept, there is a situation (packing the car for a vacation, a wedding ceremony) that is played out one way, then restarted and played another way.  Immediately after Dujardin won the Oscar, all the clips from his shows were taken down from You Tube.

I have a certain fondness for this film.  In 2006, I reviewed it for the Independent Weekly, and loved it so much, when it played local theaters, the distributor included a pull quote from my review in the ad.  This is the only time it has ever happened.  But, not the last, I hope!

I was so glad that we had an (almost) sold out screening, and that the audience at the NCMA laughed so uproariously from the opening titles to the very end. Luckily the film was subtitled, because the laughter often drowned out the dialogue. As the films goes on, OSS 117 speaks more and more Arabic, and one time said something (unsubtitled) which made an audience member gasp. It must have been something really dirty. Clearly, one has to speak both French and Arabic to get every joke. Now, having seen Dujardin’s superb performance in The Artist, I appreciated him even more. The myriad ways he tweaks James Bond’s suave cool into an irritating narcissicm is comic brilliance. In truth, when you meet someone who thinks he’s soooo smooth, he IS a little ridiculous, non?

Michel Hazanavicius was born in Paris, his grandparents emigrated from Lithuania.  He directed commercials and tv shows, and one film, Mes Amis, before the film you’ll see tonight.  He made a sequel, Lost in Rio, which isn’t nearly as good, and then, The Artist, which swept the Oscars this year.  The OSS films and The Artist also star his wife, Bérénice Bejo.  If there is relatively little information available on him right now, what you see before your eyes needs no embellishment.  He loves old movies of all varieties, and I hope he continues to pursue his passion, from which we, as moviegoers, all benefit. 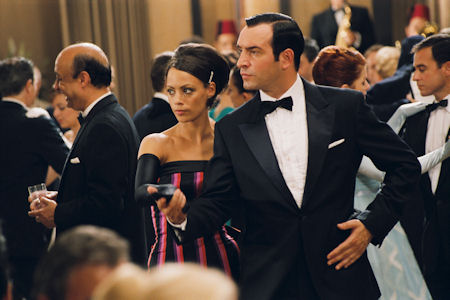 http://boomer-cafe.net/version2/index.php/BD-Litterature-des-annees-50/Hubert-Bonisseur-de-la-Bath-alias-OSS-117/ The Man With the Golden Touch: How the Bond Films Conquered the World by Sinclair McKay, Onscreen and Under Cover: The Ultimate Book of Movie Espionage by Wesley Alan Britton, Beyond Bond: Spies in Fiction and Film by Wesley A. Britton.