Two unmarried Victorian couples escape to Scotland for a “trial marriage” in this shocking play written in the 1920s. One of stage legend Lillie’s rare screen appearances, with elegant sets and costumes by Cecil Beaton (My Fair Lady) this sparking comedy was a smash hit at the last TCM Film Festival and “feels like a crazy combination of the Marx Brothers and Oscar Wilde” (tcm.com). 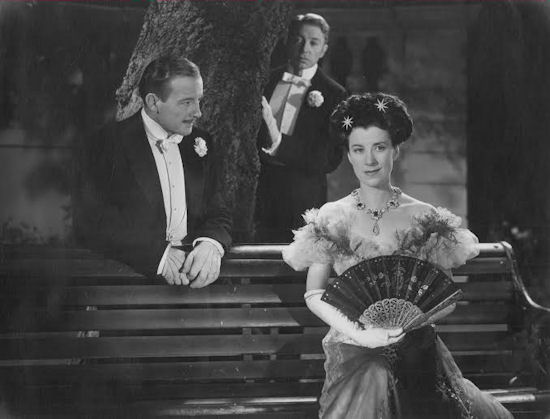 Frederick Lonsdale was born in 1881, his birth name was Lionel Frederick Leonard.  He began writing musicals, King of Cadonia was his first, in 1908, and he continued with a number of popular works through the end of WW I.  His first non- musical comedy, Aren’t We All? debuted in 1923.  The Last of Mrs. Cheyney, about a gang of society thieves, ran in London for 514 performances, and became an early Norma Shearer hit in the beginning of the talkie era.

On Approval premiered in New York in 1926, playing for almost 100 performances.  In London, it ran for over a year. The play had already been filmed once, in 1930. Although originally set in the 1920s, this film transposed it to the late Victorian era when the “trial marriage” plot would have been significantly more shocking, although the text stays closely to the original play. The Gay 90s was now enshrined in gentle memory, the Roaring 20s so close in time that it might seem dated to contemporary audiences.  Brook thought the moment was right, as the play had a successful revival on stage during WW II and “it offered Brook the possibility of escaping the shackles of playing stiff-upper-lipped patriots and reminding the public of his skills as a light comedian” (Spicer 43). 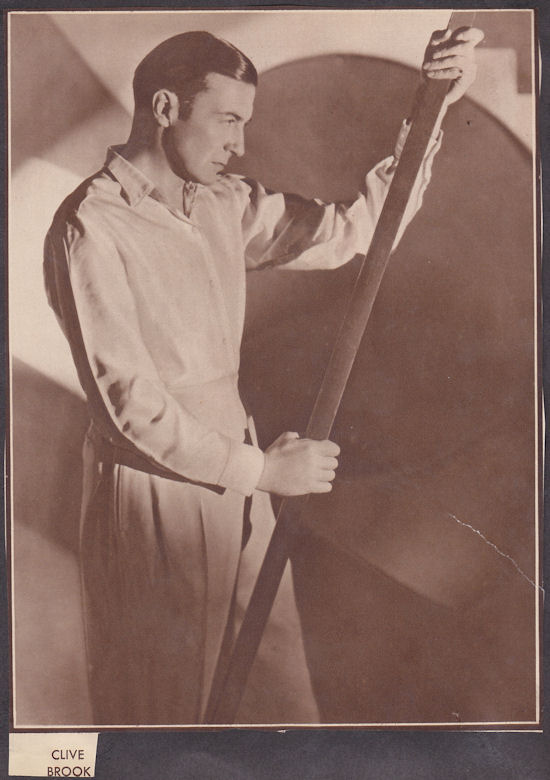 Old scrapbooks are surprisingly full of Brook glamour shots. This one is from about 1932.

This was Clive Brook’s (1887-1974) last movie appearance.  Brook is a rather stolid on screen personality, even though he was considered to be a matinee idol in his day. He acted in Hollywood films, starting in 1920, in silents opposite such stars as Clara Bow, in Hula, and talkies such as in Tarnished Lady with Talullah Bankhead and with Marlene Dietrich in Shanghai Express. His buttoned-up screen image created a contrast with his more sensual leading ladies.  He also played Sherlock Holmes on screen. He was the lead creative force in getting On Approval made, as star, co-producer (with Sydney Box) and co-screen writer, with the collaboration of Terence Young, later the  director of the early James Bond films Dr. No, From Russia with Love and Thunderball.  After the first week of shooting, Brook fired the original director and cinematographer because he felt their slow pace and artistic ambitions contrary to his light-hearted intent.  It was Brook who assembled the comic prologue to the film, enlisting familiar newsreel commentator E. V. H. Emmett to narrate. This was his only film as a director. 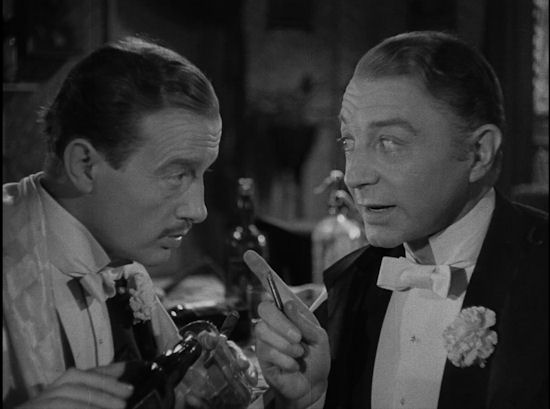 Beatrice Lillie, once called “the funniest woman in the world” was a great star of musical comedy and revues, and a friend and collaborator of Noel Coward.  She was the first person to publically perform his song,“Mad Dogs and Englishmen.”   Because of her unconventional looks, she was not considered silver screen material, in spite of her success in the silent comedy, Exit Smiling. She made only cameo film appearances after this one, and now, since she was primarily a stage star, this film remains her greatest legacy.  Sheridan Morley said of her “Lillie’s great talents were the arched eyebrow, the curled lip, the fluttering eyelid, the tilted chin, the ability to suggest, even in apparently innocent material, the possible double entendre” (wiki). This is seen to great advantage in On Approval.

Googie Withers was born in Karachi, now Pakistan, although then part of British India.  Her Indian nanny nicknamed Georgette “Googie” which means little pigeon in Urdu (I presume). She studied acting and dancing, and hired as a film extra she quickly began to play small roles starting in the mid-1930s, most notably in Alfred Hitchcock’s The Lady Vanishes, as one of the heroine’s friends.  She acted on stage and screen for many years, her last appearance was on stage in 2002, she died in 2011 aged 94. 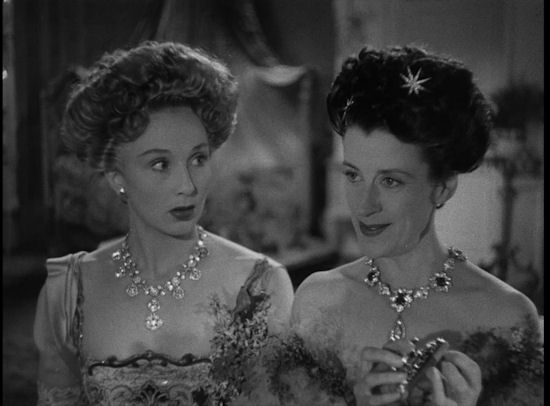 Roland Culver was retained from the play. He played English gentlemen on stage and screen for fifty years.  He was in Dead of Night, Thunderball, and his final role was in 1982’s The Missionary.

The producer, Sydney Box, convinced Cecil Beaton to design the costumes, and, complemented by Tom Morahan’s sets, they set the precisely right Belle Epoque tone. An Edwardian, born in 1904, Beaton was a celebrated photographer, diarist, and designer of sets and costumes for operas, ballet and the stage.  Beaton had been designing for films since 1941. Early in his career, a friend asked him, “Why don’t you go into films?” He replied, “I can’t afford a whole new set of enemies” (Spencer 89). 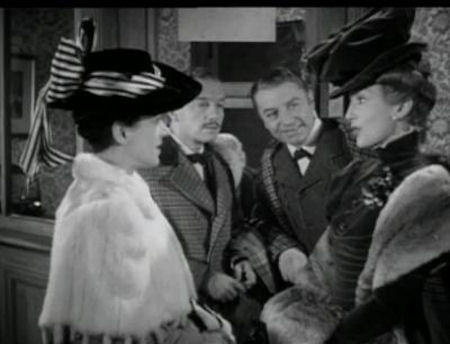 Googie Withers is on the right in my favorite outfit from the film, a velvet travelling suit.

Set in the “Naughty 90s” Beaton styled On Approval to represent the end of the decade, without the exaggerated leg of mutton sleeves from the mid ’90s. He had a lifelong devotion to the late Victorian and Edwardian eras which is revealed in his most entrancing designs. He won four Tony Awards for stage costume design, and two Oscars for the sets and costumes of My Fair Lady, surely among the most beautiful gowns ever designed for the screen. When I was a teenager, I was obsessed with one of his many books, The Glass of Fashion, probably because of Audrey Hepburn’s wardrobe in My Fair Lady.  The book brimmed with his evocative sketches, and passages in which he described the most beautiful and fashionable women of the age, beginning with his mother. 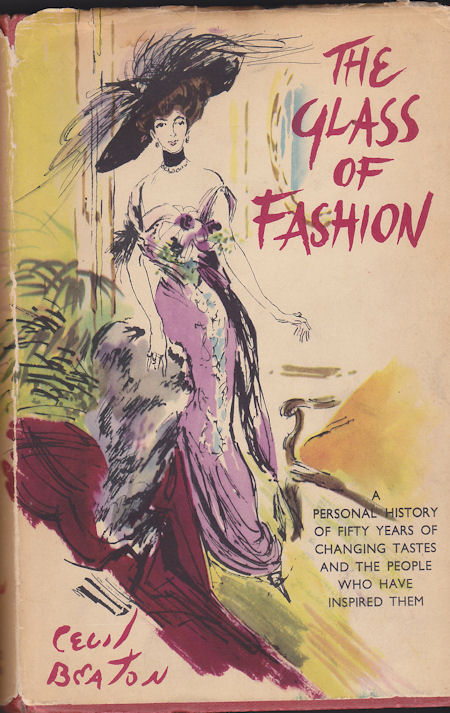 “My inward child’s eye, even as my adult vision, always sought out the detail rather than the conception as a whole.  A particular trimming on a dress seen in childhood could make a profound impression on me, and certain details have remained in my memory to this day, with acute combinations of colour that have influenced my own creative work.  Thus, it was always a thrill when my mother, who was a fair reflector of the feminine fashions of the day, would come to say good night to me, perhaps going out to a dinner party, dressed in miraculously soft materials.  On one occasion, she wore a large special bunch of imitation lilies of the valley on her bosom, pinned to a pale green chiffon scarf.  This sunburst of artificial flowers was a revelation, because I had not thought lilies of the valley could be simulated” (Beaton 12).

After filming was completed, studio executives announced the film was worthless, and kept it on the shelf for a year and a half.  When finally released, the film was a huge hit. On Approval was not only daring by the standards of 1927, but also by the standards of the American Production Code decades later.  They were shocked by the discussion of “trial marriage,” too much of Clive Brooks body in the bath, and references to God, Hell and Damnation. Although it ran for seven months in London, American critics and audiences slighted it, and it has taken this long to find an audience, in spite of the fact Time Magazine named it one of 1944’s Ten Best. Film director Lindsay Anderson called it “the funniest British light comedy ever made.”  A sold out North Carolina Museum of Art screening, with much laughter and applause at the end, confirms On Approval‘s continuing delight. 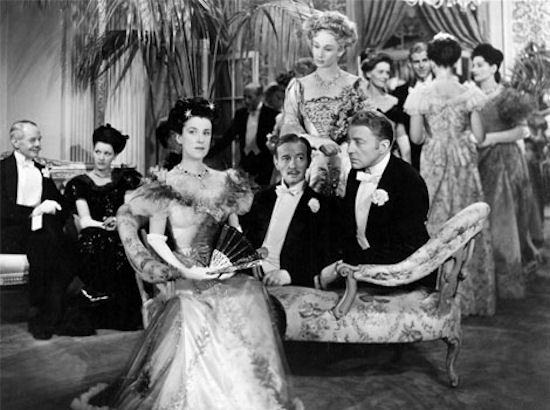