On the Town is one of my favorite musicals, but I learned to love it because of my daughter.  I was always a Fred Astaire person, Gene Kelly was a bit too much “regular guy” for me.  Growing up, no tv station in Cleveland OH, showed MGM movies.  In spite of being a passionate movie lover, I never saw Greta Garbo or Jean Harlow until I was in college.  TV is different these days, and if you love cinema, there is no more important home away from home than Turner Classic Movies.  Ted Turner bought the MGM library and plays all the studio’s films regularly.  My daughter discovered the Technicolor musical baubles of this studio early, and she became a devotee of Gene Kelly.  I think her first Kelly film on constant repeat was an odd one, Anchors Away, which also co-starred Frank Sinatra, with Kathryn Grayson, moppet Dean Stockwell, the classical musician and conductor Jose Iturbi and an animated Jerry the Mouse. 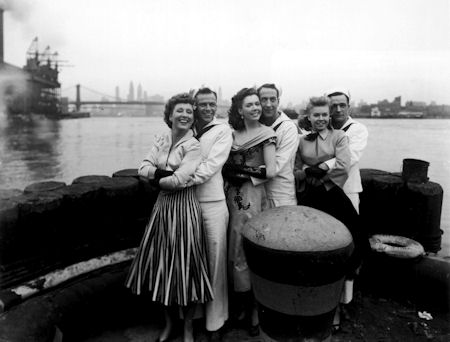 As we watched Kelly’s films over (and over and over) Singin’ in the Rain, Cover Girl, Anchors Away and On the Town became beloved favorites. Not An American in Paris, though. Kelly often plays the broody hero, but he’s positively despondent in that one.  What On the Town had to offer was not one but two comedy couples in addition to the conventional Kelly-Vera Ellen romance, Jules Munshin and the spectacular Ann Miller (as an anthropologist!) singing “Primitive Man” and Frank Sinatra and the brassy Betty Garrett as a lady cab driver. Vera-Ellen and Kelly’s more conventional romance wasn’t nearly as interesting as wisecracking Garrett trying to get Sinatra to “come up to my place.” Two of the three women are quite sexually agressive (played for comedy, of course) but it’s still quite a refreshing change from the often bland heroines of the day. The location shots in New York City fascinated us, too.  We loved to spot the crowds watching the filming at places like Rockefeller Center.

MGM had owned the rights to the Broadway musical since 1944, before the play’s debut.  It was once of the first pre-production Hollywood sales.  Kelly had seen it in New York, as had Louis B. Mayer, who disdained it, in part because of the integrated cast.  Finally, MGM decided to make good on their past investment. Kelly, if not excited about wearing a sailor’s uniform after Anchors Away, was excited to be star, director and choreographer.  The plot is slight (certainly not a first for a musical) but the 24 hour leave in which three sailors find love is fast and full of joy and energy. 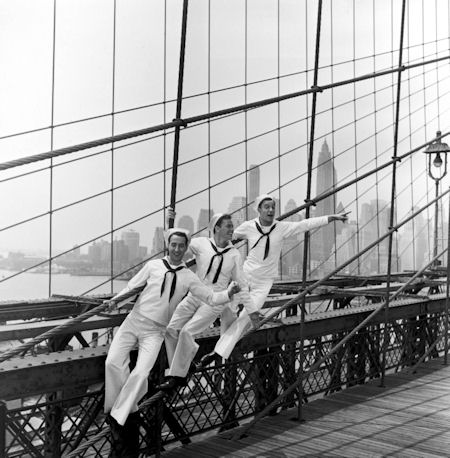 The Breen Office, in charge of censorship, had problems with it right away.  For one thing, no way could the cast sing “New York, New York, a hellava town” and other lyrics were censorable as well (especially in “Primitive Man”).  Mayer hated Leonard Bernstein’s score, he thought it was too “avant garde” for the movies (Yudkoff 198).  Bernstein was quite cross that much of his music was replaced, and he was still fuming decades later that audiences assumed that Roger Edens’ more conventional music was his. Once you know there are two quite different composers at work, it is quite easy to sort out Bernstein’s jagged rhythms from the smooth MGM tones of Edens, but they do blend together. The movie was so different from the play, some fans of the original musical were disappointed. Kelly didn’t mind, he approved of the new score written by Roger Edens and the script by Betty Comden and Adolph Green.  He also liked the innovative time stamped crawl at the bottom of the screen to indicate the time of day. 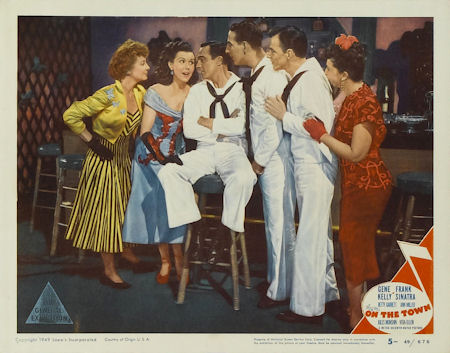 There was a month of rehearsal before shooting began.  If you wonder why classic Hollywood cinema’s dances look so good, it’s because of the lavish rehearsal time the studio could afford when everyone was under contract.  Kelly insisted that Sinatra rehearse (he always tried to slack off that kind of hard work) so that his dancing skills would be up to scratch.
Mayer could not understand why Kelly wanted to shoot some of the film on location in New York City.  It had never been done before, and he thought the audience would become confused by the combination of reality and fantasy, as if musicals weren’t completely a combination of reality and fantasy, already.

Kelly had the prop department make a gigantic dinosaur skeleton. The skeleton’s collapse would be the climax of Jules Munshin and Ann Miller’s “Primitive Man.”  They used cubes of corrugated paper cut with buzz saws into 283 bones, and strung together with wire, so they could be rigged for collapse, and then could be pulled back together for retakes.  The first take was so perfect that another take was unnecessary, quite unexpected, given Kelly’s driving perfectionism. 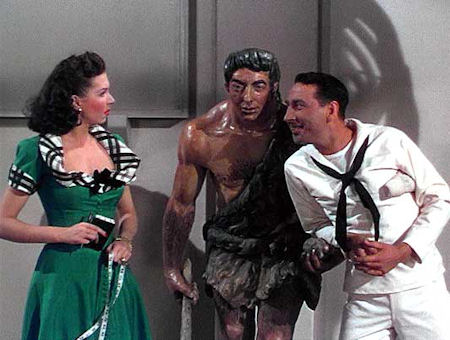 The set for the observation deck on top of the Empire State Building was built in the middle of Esther Williams’ drained pool, shooting 45 feet high. Munshin was so terrified of heights, filming on the actual skyscraper’s deck was out of the question.
After all the shooting in California was complete, the six stars and the tech crew flew to New York.  They only had five days to film all the familiar tourist landmarks. Although two of those days were rainy and overcast, making filming impossible, miraculously they shot at the Brooklyn Bridge and Brooklyn Navy Yard, Wall Street, Chinatown, the Statue of Liberty, Greenwich Village, Central Park, Columbus Circle, Rockefeller Center, the RCA Building at Rockefeller Center and Grant’s Tomb.  Frank Sinatra, a huge teen idol at the time, created logistic complications.  If crowds spotted him, filming would become impossible.  The cameraman, Hal Rossen, and his equipment rehearsed the camera movements ahead of time, the camera hidden in a station wagon.   The actors rode in taxis to the locations. Kelly said, “When I jumped out of the taxi, I’d give a loud whistle, the station wagon would start moving, and we’d follow.  I had a stopwatch in my pocket, I’d say, ‘And-a-one, and-a-two, and-a-three, and-a-four…and then we’d sing, New York, New York,,,’ and that’s the way we shot all that stuff.  We never had any protection and we did the whole thing in five days.” 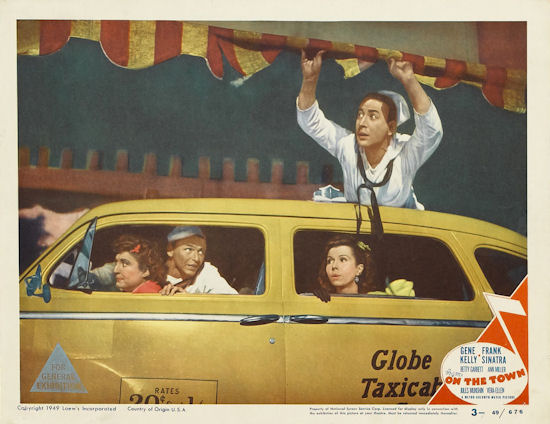 Kelly’s co-director, Stanley Donan, made it all possible.  They argued about the inclusion of the “A Day in New York” ballet with Kelly and Vera Ellen (and dancers representing the other characters, another thing Mayer thought too confusing).  It retold the film’s plot in dance (to Bernstein’s score, for once) and Donan thought it slowed the film down.  But, Kelly was determined to put serious dance on screen and his argument won the day. 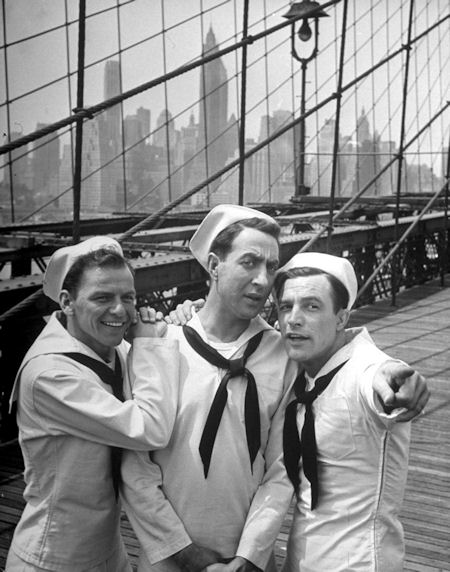 When Mayer saw the film, he didn’t get it, and thought it was a disaster.  The box office would prove him wrong. On the Town was a smash hit easily making back three times its budget and setting records at Radio City Music Hall.  After it came out, Kelly’s career was at its peak, and for a brief time he could put all his wildest dreams on screen.

“The result was one of the most joyous and lyrical celebrations of the wonderful town itself, the American can-do excitement of the immediate post war period, and the sheer exuberance of its youthful optimism.  No film could better have launched Hollywood into the 1950s, the last great decade of the screen musical” (Moreley and Leon 102). 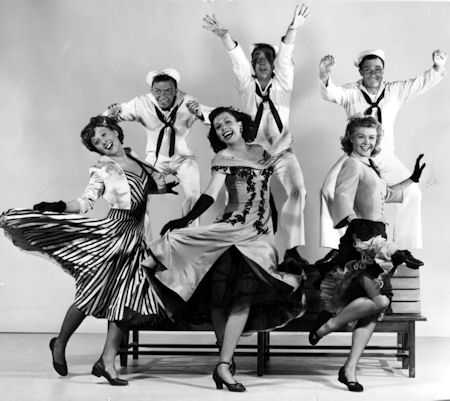