The movies’ most famous taxi ride?  Director Kazan’s first outing after his appearance as a “friendly witness” in the 50s Commie witch hunts tackles a washed up fighter’s courageous stand against the gangsters controlling the Longshoreman’s union. Brando’s powerful Best Actor performance was considered by his director the greatest in American film.  “A heart-clutcher from beginning to end” (Village Voice).

On the Waterfront won nine major Oscars (including Best Picture, Director, Screenplay, Actor and Supporting Actress) and cemented the influence of Kazan, Brando and their Method acting style in the forefront of American cinema.  On the American Film Institute’s list of 100 Greatest, the film’s rank is currently  #19. Many people have seen (and can quote) the taxi cab scene, even if they have seen no other part of the film.  Unlike the glossy spectacles that often won awards in the 1950s, this film evokes a neorealist style. A story about working people  and their problems, it reflected the real-life divisions that the House on UnAmerican Activities Committee was tearing in the fabric of American political life.  Brando’s Terry Malloy is among cinema’s first anti-heroes, unsure of his place in the world, and ending on a note of ambiguity, not the clear-cut heroism we have come to expect from Hollywood. 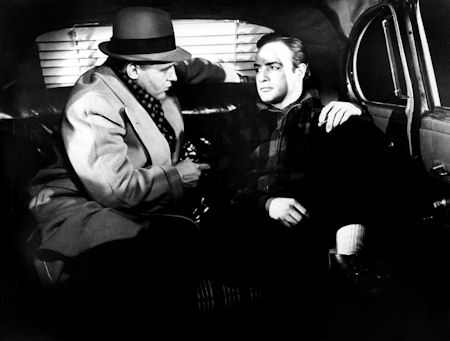 The script began with an inspiration of playwright Arthur Miller, who had been doing research in the Red Hook area of Brooklyn, about waterfront crime and gangland corruption.  He was intrigued by the story of a rebel named Peter Panto, a union activist who had been murdered in 1939.  “The idea of a young man defying evil and ending in a cement block at the bottom of the river drew me on” Miller said in his autobiography (Braudy 11).  Miller and Kazan had been collaborating on a script, eventually reaching a dead end. But, novelist and screenwriter Budd Schulberg had also been working on a story examining  gritty dockside conflicts under the shadow of Manhattan’s skyscrapers.  A book of collected newspaper stories “Crime on the Waterfront” by New York Sun reporter Malcolm Johnson won the Pulitzer Prize in 1949.  It was through Johnson that Schulberg met Father John Corridon, a priest who introduced him to longshoremen who had experience with the corrupt union that governed the docks.  He was also friends with Tony Mike deVincenzo, who had once worked on the docks and accepted mob favors.  Eventually, Corridon informed against the mob in government hearings.  He was tough, and was a bracing inspiration for both the film script and Kazan and Schulbergs personal lives. Schulberg’s script would go through many revisions before focusing at last on the character of Terry Malloy. Collaboration was an important aspect of the Group Theater aesthetic, where Kazan and Schulberg had roots, and the script reflected it.

In 1952, in midst of the HUAC investigations, Elia Kazan named names before the committee.  His testimony, and an advertisement taken out in his name and printed in the New York Times justifying his decision to do so, made him a lightning rod.  Until his death almost 50 years later, he suffered resentment, a symbol of a tumultuous time.  I remember vividly how he was booed at the Oscars in 1999, while accepting his lifetime achievement award.  Half a century later, the wound was still open. He would be accused of making On the Waterfront to justify his being an informer, and affirmed, “I never denied it” to one of his biographers ( Schickel 283). Schulberg protested the focus on Kazan, but only, he said, because it trivialized the real battles that the longshoremen waged against the corrupt unions. (Rapf xxi). And, it’s possible that Kazan and Schulberg wanted to show that a film could have progressive ideals without the authors being members of the Communist party.

Unsurprisingly, in spite of the impeccable credentials of the participants, no Hollywood studio was interested in a stark black and white social problem film, when any picture not in Cinerama, Technicolor or 3-D was considered a meal that television would eat for lunch. Kazan had been hoping that Darryl Zanuck, now at Fox, but who had once set the ripped from the headlines mood at Warner Brothers in the 1930s would be a sure thing, but he didn’t think the public, who was flocking to his Cinemascope epic, The Robe, would care about “a lot of sweaty longshoremen.” Turned down by every major studio, it took visionary independent producer Sam Spiegel to realize that the film had potential. He gave them $800,000 and a 35 day shooting schedule.

Brando had always been the first choice for Terry Malloy, but, upset about Kazan’s HUAC testimony, he twice returned the script unread.  John Garfield, Montgomery Clift and Paul Newman were possibilities, but Frank Sinatra, born in Hoboken, NJ, the filming location, was seemingly set (he had just won an Oscar for From Here to Eternity) before Brando reconsidered.  Brando was paid a flat fee of $150,000, and promised that he could leave by 4:00 pm so he wouldn’t miss his standing psychiatrist appointment.  Every morning, Brando, in costume, rode the subway to the Hoboken waterfront.  He spent time loading crates like his character and absorbing the atmosphere and character of the docks, and audiences were struck by the authenticity of his acting. 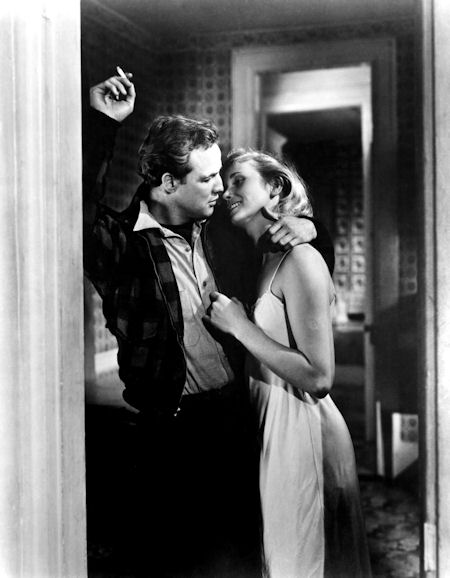 Kazan, in a letter to Brando about the role wrote, “A bum becomes a man, that’s it” (Rapf 20).  In his autobiography, he said of Brando, “If there is a better performance by a man in the history of film in America, I don’t know what it is…what was extraordinary is the contrast of the tough guy front and the extreme delicacy and gentle cast of his behavior” (Rapf 10).

The rest of the cast was drawn from the Actor’s Studio, Lee J. Cobb, electrifying in Arthur Miller’s Death of a Salesman, Karl Malden, who had played Mitch opposite Brando in Streetcar Named Desire, Rod Steiger, a massive hit in the tv drama, Marty. Two actresses read for the part of Edie, Elizabeth Montgomery, years before Bewiched and and Eva Marie Saint.  Part of the fun of the film’s casting is spotting uncredited bit players Martin Balsam, Fred Gwynne, Pat Hingle and Nehemiah Persoff. But, it’s Brando’s powerhouse performance that is the glue that holds the film together.

Saint worked easily with Brando, who was kind to a newcomer in her first film.  Their famous glove scene began as an improvisation, and their intensity is compelling.  “Marlon was involved, which is different from being committed.  Most of it was underneath.  His immersion in Terry was complete” Kazan said (Bosworth 108).  The taxicab scene also began as an improvisation, when Brando questioned Terry’s dialogue and behavior in the scene.  Kazan said, “Marlon showed me, as he often did, how the scene should be performed.  I never could have told him to do that scene as well as he did it” (Bosworth 110).

Ex-boxers were hired to provide authenticity as mob goons. Roger Donoghue, who had accidentally killed another fighter in the ring, coached Brando on how to be an ex-pug.  Schulberg asked Donoghue, “Could you have been a champion?”  “I could have been a contender” he replied, and the line ended up in the script (Kanfer 126). Real longshoremen were hired as extras, since the weather was so cold few professional actors showed up for the parts.  The dock workers had to be paid their union wages for at least 4 hours a day, in cash, by the following day at noon. 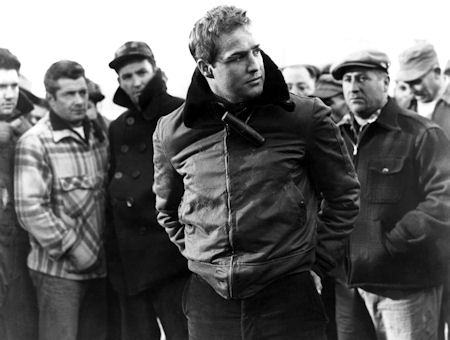 Various considerations, including financial ones and street noise, as well as the fact that the NJ docks were not as tightly controlled by the mob, moved the production to New Jersey from the original location of Lower Manhattan.  The hiring of the police chief’s brother as head of security indicated that there were some objections to the story’s exposé of dockside working conditions.  “The mob was always watching” Kazan said (Bosworth 113). Schulberg and Kazan walked the streets of Hoboken looking for locations: there are no sets, all the settings are real. The strong sense of place, the detachment from the world of Manhattan just across the river is important to its powerful story.  Filmed in the freezing winter of 1953-54, the icy temperatures, and bone-chilling sleet and snow contributed to the atmosphere.  Brando said, “It was so damn cold, you couldn’t overact”  (Braudy 29).

Leonard Bernstein wrote only one original film score, for On the Waterfront.  Originally hired for his marquee value alone, he was a celebrated conductor, soloist and composer in a day when classical music was a vital part of pop culture. He became excited about being able to add his distinct signature to what he believed to be an important film. “I heard music as I watched, that was enough” he wrote (Schickel 305). Because he was not a screen composer, and had no interest in supplying a trumpeting fanfare to open the film, or to create “musical wallpaper,” his score enhances the emotions of the film in a unique manner.  The editing and cueing of his score was not without conflict, but he was granted the unusual favor of being given the rights to adapt his score into a symphonic piece.  You can hear Bernstein briefly as the unseen jazz pianist in the bar where Brando and Saint share a drink.  He was paid scale, $48.21 for his recording, on top of the standard $15,000 fee for the score.

The film’s Christian symbolism was much remarked upon, both at the time, and as the film has taken its place in cinema history.  Speaking to the Catholic students at Fordham University, Schulberg said, even though he was Jewish, “I agreed with so much of the social message of Jesus, and I was moved by it, and further moved by the depth and commitment of people like Father Corridan.  It wasn’t a problem for me.” (Kanfer 129).

For all the wonderful elements of the film, the raw location, superb script, ensemble cast, brilliant photography by Boris Kaufman, Bernstein’s score, it is Brando’s performance that remains iconic.  Kazan described Terry Malloy’s character, “He is a primitive.  He really can only half read.  He thinks too much, it gets painful and then he shakes it off, like a fighter might shake off a right cross.  This combination of primitiveness and gentleness, of false savagery and self-doubt, of guilt and yet longing is the thing that makes the part fascinating to me” (Schickel 299).

A full house at the North Carolina Museum of Art responded strongly to the film, rapt during the screening, and giving a long and loud ovation at the end.

Kazan felt the whole experience was perfection.  “I was trained to work with people on location, and I enjoyed it.  I enjoyed the longshoremen…I liked them a lot.  It was a great experience for me because I was on my feet all the time in the city and I think from that point of view it’s as close as I ever came to making a film exactly the way I wanted” (Schickel 299).